1.    What are Health and Health Care Disparities?

2.    Why do Health and Health Care Disparities Matter?

Disparities in health and health care not only affect the groups facing disparities, but also limit overall gains in quality of care and health for the broader population and result in unnecessary costs. Addressing health disparities is increasingly important as the population becomes more diverse.

3.    What is the Status of Disparities Today?

Many groups are at disproportionate risk of being uninsured, lacking access to care, and experiencing worse health outcomes. For example, people of color and low-income individuals are more likely to be uninsured, face barriers to accessing care, and have higher rates of certain conditions compared to Whites and those at higher incomes.

4.    What are Key Initiatives to Address Disparities?

The Affordable Care Act (ACA) coverage expansions helped narrow longstanding disparities in health coverage for people of color and low income individuals. The ACA also included other provisions focused on addressing disparities and the 2011 Department of Health and Human Services (HHS) Disparities Action Plan set out a series of priorities, strategies, actions, and goals to achieve a vision of “a nation free of disparities in health and health care.” States, local communities, private organizations, and providers are also engaged in efforts to reduce health disparities.

5.    What is at stake for disparities Looking Forward?

Although the ACA sharply reduced uninsured rates for people of color and low-income individuals, coverage disparities remain, and changing federal priorities could reverse recent progress reducing disparities. Continued enrollment efforts could further narrow coverage disparities, but the share of remaining nonelderly uninsured who are eligible for coverage varies by race and ethnicity. Moreover, recent reductions in funding for outreach and enrollment may limit continued coverage gains. Further, changing federal priorities could lead to coverage losses and other reverses in recent advances in reducing disparities.

1.  What are Health and Health Care Disparities?

A complex and interrelated set of individual, provider, health system, societal, and environmental factors contribute to disparities in health and health care. Individual factors include a variety of health behaviors from maintaining a healthy weight to following medical advice. Provider factors encompass issues such as provider bias and cultural and linguistic barriers to patient-provider communication. How health care is organized, financed, and delivered also shapes disparities. Moreover a broad array of social and environmental factors outside of the health care system affect individuals’ health and ability to engage in healthy behaviors (Figure 1).4 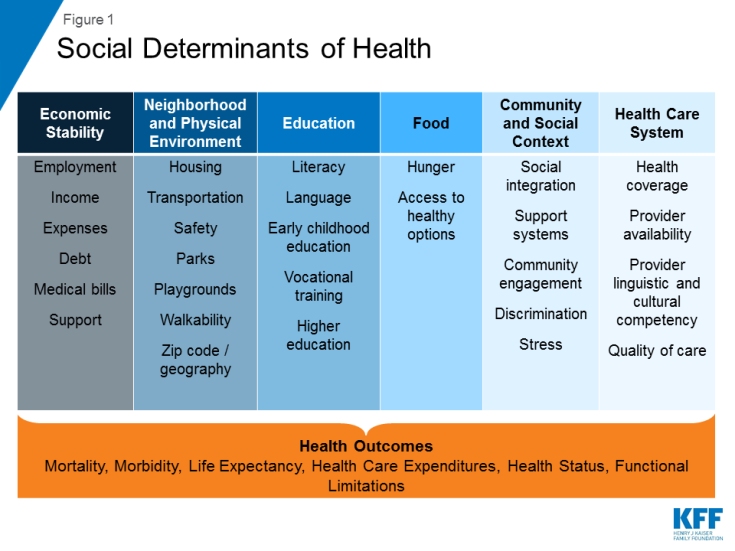 Health and health care disparities are commonly viewed through the lens of race and ethnicity, but they occur across a broad range of dimensions. For example, disparities occur across socioeconomic status, age, geography, language, gender, disability status, citizenship status, and sexual identity and orientation. Federal efforts to reduce disparities focus on designated priority populations who are vulnerable to health and health care disparities, including people of color, low-income groups, women, children, older adults, individuals with special health care needs, and individuals living in rural and inner-city areas. 5,6,7 These groups are not mutually exclusive and often interact in important ways. Disparities also occur within subgroups of populations. For example, there are differences among Hispanics in health and health care based on length of time in the country, primary language, and immigration status.8,9

Health and health care disparities in the United States are a longstanding and persistent issue. Disparities have been documented for many decades and, despite overall improvements in population health over time, many disparities have persisted and, in some cases, widened.10 Research also suggests that disparities occur across the life course, from birth, through mid-life, and among older adults.11,12

2.  Why do Health and Health Care Disparities Matter?

Disparities in health and health care not only affect the groups facing disparities, but also limit overall improvements in quality of care and health for the broader population and result in unnecessary costs. Addressing disparities in health and health care is not only important from a social justice standpoint, but also for improving the health of all Americans by achieving improvements in overall quality of care and population health. Moreover, health disparities are costly. A recent analysis estimated that disparities amount to approximately $93 billion in excess medical care costs and $42 billion in lost productivity per year as well as economic losses due to premature deaths.13

As the population becomes more diverse, it is increasingly important to address health disparities. In 2016, four in ten (40%) individuals living in the United States were people of color. It is projected that people of color will account for over half of the population in 2050, with the largest growth occurring among Hispanics (Figure 2). There also are wide gaps in income across the population. As of 2016, the richest 20% of households have an average income of $214,000, nearly 17 times the average income of $13,000 for the bottom 20% of households (Figure 3).14 Given that people of color make up a disproportionate share of the low-income15 and the uninsured16 relative to their size in the population, the growth of communities of color and widening of income gaps amplify the importance of addressing health and health care disparities. 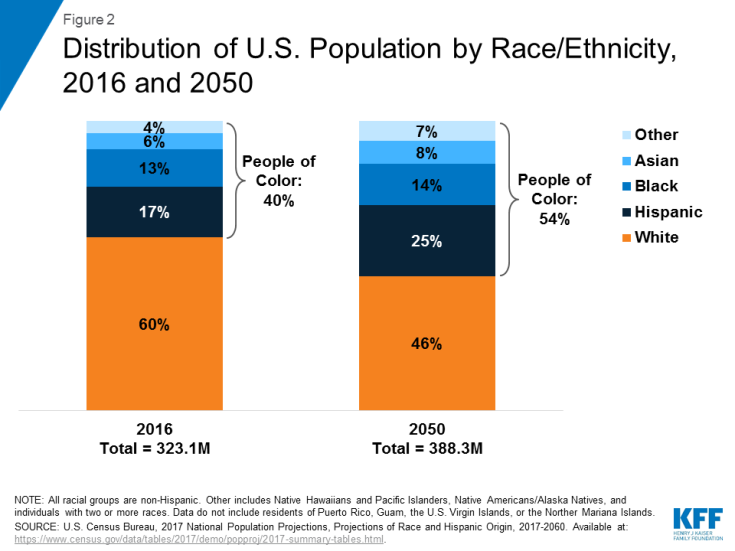 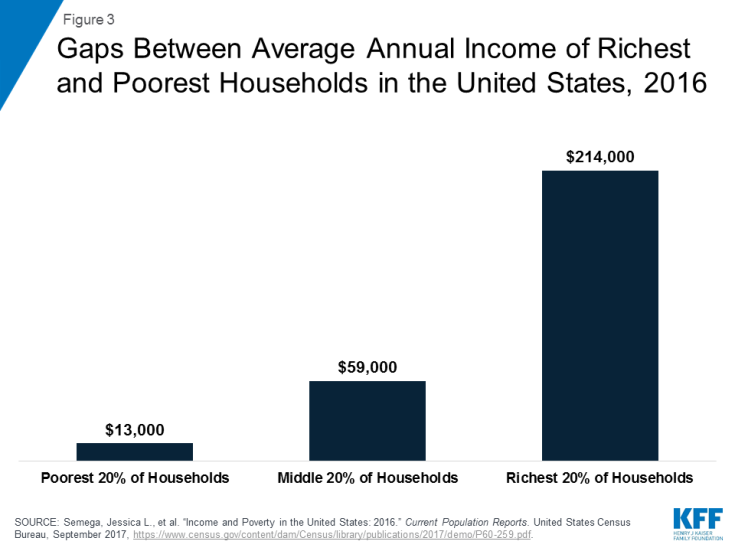 Figure 3: Gaps Between Average Annual Income of Richest and Poorest Households in the United States, 2016

3.  What is the Status of Disparities Today?

Today, many groups face significant disparities in access to and utilization of care. People of color generally face more access barriers and utilize less care than Whites. For example, among nonelderly adults, Hispanics, Blacks, and American Indians and Alaska Natives are more likely than Whites to delay or go without needed care (Figure 4). Moreover, nonelderly Black and Hispanic adults are less likely than their White counterparts to have a usual source of care or to have had a health or dental visit in the previous year (Figure 5). Low-income individuals also experience more barriers to care and receive poorer quality care than high-income individuals.17 Disparities in access and utilization also occur across other dimensions. For example, individuals living in rural areas have more limited access to private coverage compared to those in urban areas and face significant barriers to accessing care.18 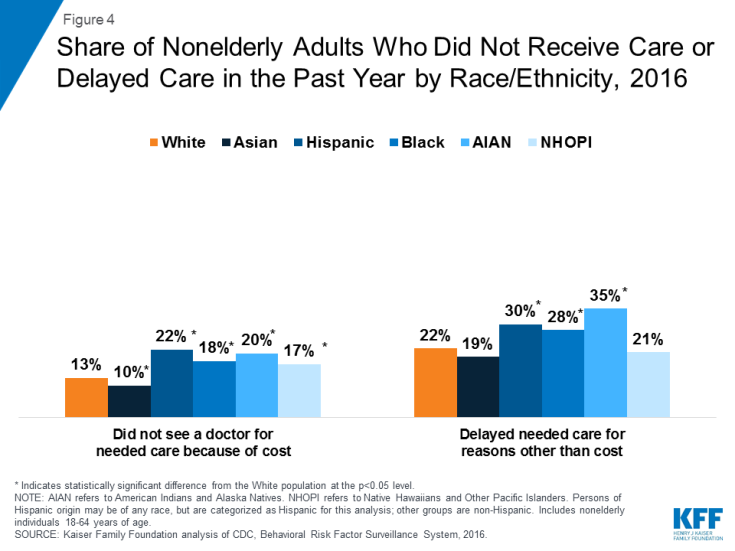 Figure 4: Share of Nonelderly Adults Who Did Not Receive Care or Delayed Care in the Past Year by Race/Ethnicity, 2016 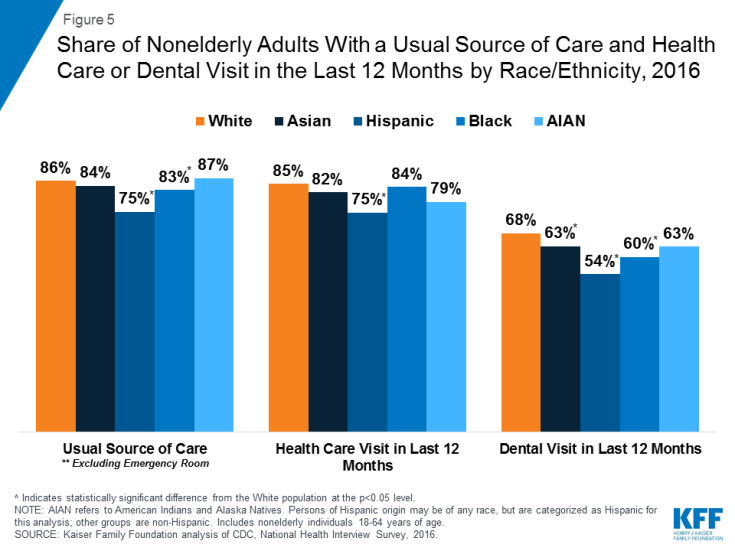 Figure 5: Share of Nonelderly Adults With a Usual Source of Care and Health Care or Dental Visit in the Last 12 Months by Race/Ethnicity, 2016

Additionally, some groups are at higher risk for health conditions and experience poorer health outcomes compared to other groups. For example, Blacks and American Indians and Alaska Natives are more likely than Whites to report a range of health conditions, including asthma, diabetes, and heart disease (Figure 6). Health disparities are particularly striking in the burden of AIDS and HIV diagnoses and death rates, with Blacks experiencing over eight and ten times higher rates of HIV and AIDS diagnoses than Whites (Figure 7).19 Infant mortality rates are higher for Blacks and American Indians and Alaska Natives compared to Whites20, and Black males have the shortest life expectancy compared to other groups.21 Low-income people of all races report worse health status than higher income individuals.22 Further, research suggests that some subgroups of the LGBT community have more chronic conditions as well as higher prevalence and earlier onset of disabilities than heterosexuals.23 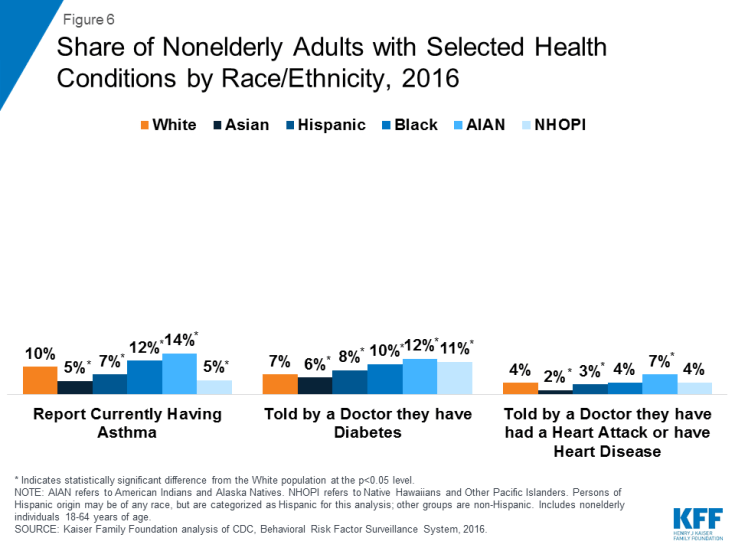 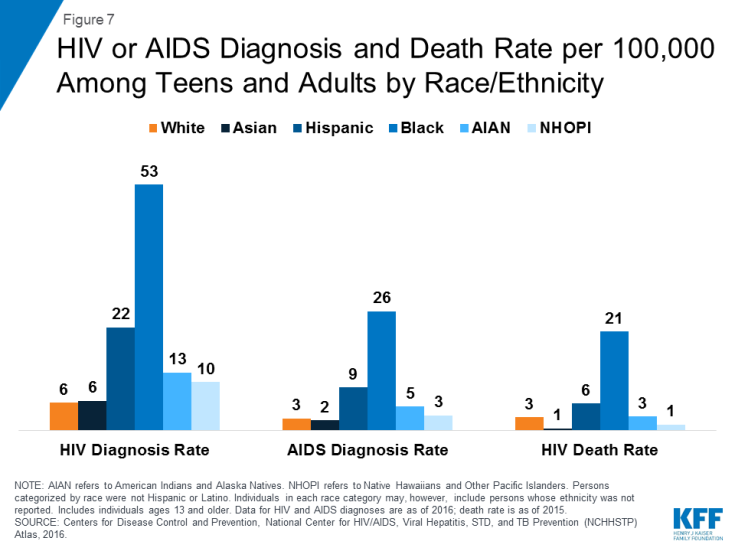 Figure 7: HIV or AIDS Diagnosis and Death Rate per 100,000 Among Teens and Adults by Race/Ethnicity

4.  What are Key Initiatives to Eliminate Disparities?

In 2011, the Department of Health and Human Services (HHS) developed an action plan for eliminating racial and ethnic health disparities. The HHS Disparities Action Plan sets out a series of priorities, strategies, actions, and goals to achieve its vision of, “a nation free of disparities in health and health care.”30 Since the release of the report, HHS has undertaken various efforts to implement the plan including coordinating programmatic and policy efforts to advance health equity, expanding access and quality of coverage and care, and strengthening the health care infrastructure and workforce.31 In 2013, HHS also updated the national standards for Culturally and Linguistically Appropriate Services (CLAS), which seek to ensure that people receive care in a culturally and linguistically appropriate manner.

5.  What is at Stake for Disparities Looking Forward?

The ACA sharply reduced the uninsured rate for people of color and low-income groups, but coverage disparities remain. Since the ACA expanded coverage options through the Medicaid expansion and new health insurance marketplaces in 2014, the uninsured rate for the total nonelderly population has fallen from 13% to 11% as of 2017.36 Hispanics and Blacks experienced larger gains in coverage over the period relative to Whites, helping to reduce their disparities in coverage. However, they still remain significantly more likely to be uninsured than Whites (Figure 8).37 Similarly, poor (<100% of the federal poverty level or FPL) and near-poor (100-200% FPL) individuals experienced larger gains in coverage relative to those with incomes at 200% FPL or higher, helping to narrow disparities in coverage by income. However, poor and near poor individuals remain more than twice as likely to be uninsured than those with higher incomes (Figure 9).38 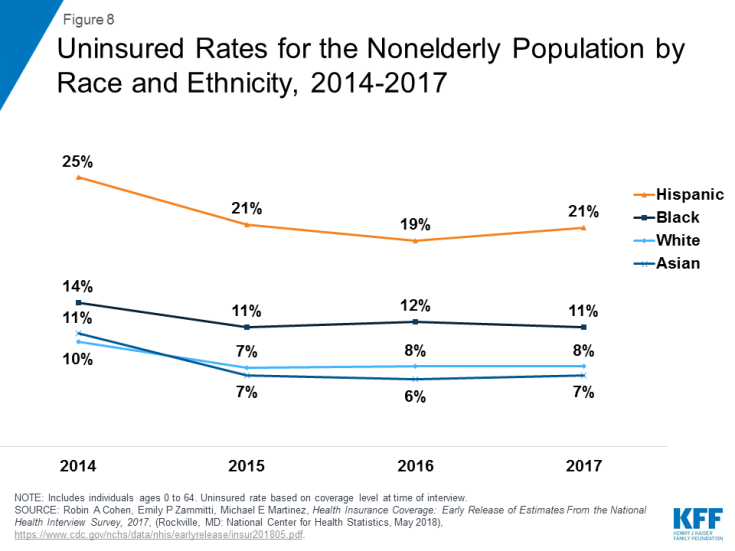 Figure 8: Uninsured Rates for the Nonelderly Population by Race and Ethnicity, 2014-2017 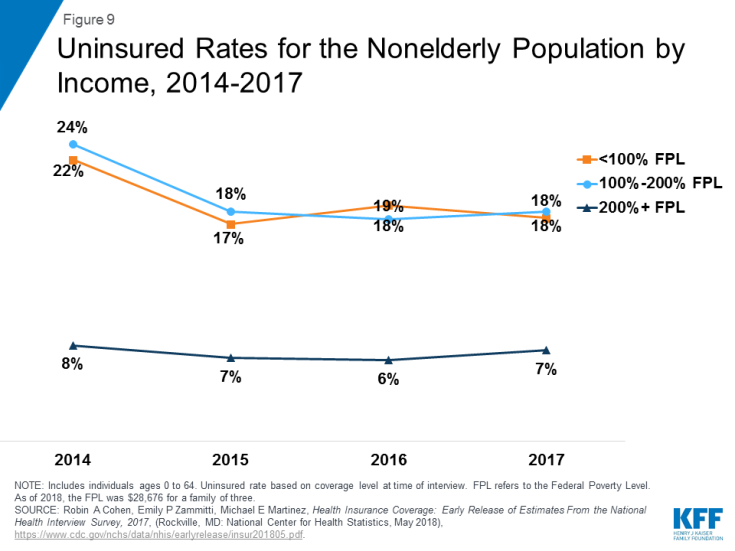 Figure 9: Uninsured Rates for the Nonelderly Population by Income, 2014-2017

Continued efforts to enroll eligible individuals into coverage could contribute to further coverage gains and narrowing of disparities, but the share of the remaining nonelderly uninsured who are eligible for coverage varies by race and ethnicity. American Indians and Alaska Natives have the highest share of nonelderly uninsured who are eligible for Medicaid or tax credits for Marketplace coverage at 70%, followed by Blacks at 64% (Figure 10). Compared to Whites, Blacks have a significantly higher share of nonelderly uninsured individuals that fall into the coverage gap that exists in the 17 states that have not expanded Medicaid.39 These individuals are adults who earn too much to qualify for Medicaid, but not enough to qualify for the tax credits, which become available at 100% FPL. Consistent with immigrants accounting for large shares of uninsured Asians and Hispanics, nearly half of these groups remain ineligible for coverage options, limiting continued coverage gains that can be achieved through enrollment efforts for these populations. 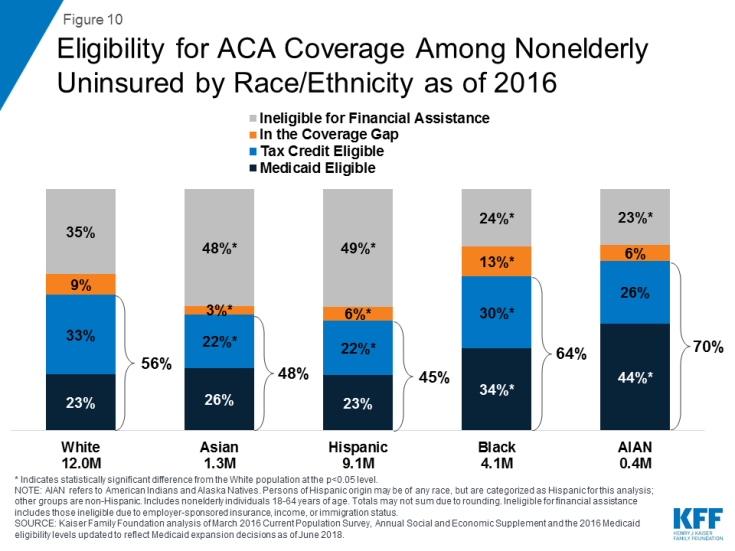 Figure 10: Eligibility for ACA Coverage Among Nonelderly Uninsured by Race/Ethnicity as of 2016

Recent reductions to outreach and enrollment funding may limit continued coverage gains and contribute to coverage losses that disproportionately affect people of color and low-income individuals. The ACA created Navigator programs to provide outreach, education, and enrollment assistance to consumers eligible for marketplace and Medicaid coverage and requires that they be funded by the marketplaces. Since taking office, the Trump administration has dramatically reduced funding for federal marketplace Navigators. The administration reduced Navigator funding to $10 million for 2018-2019, which represents a 72% reduction, on average, from current year funding, and an over 80% reduction compared to 2016 funding levels.40 Data show that Navigators play a particularly important role assisting individuals who were uninsured, had low incomes, were Latino, and had limited English proficiency. The reductions in funding will likely lead to fewer enrollments and renewals in coverage, particularly among these groups, contributing to coverage losses that could reverse recent reductions in coverage disparities.

Changing federal policy priorities could result in reductions in coverage and erode progress addressing coverage disparities. Although efforts to repeal and replace the ACA and cut federal financing for Medicaid failed in 2017, proposals to reduce federal Medicaid funding may reemerge. Moreover, some states are implementing waivers to impose work requirements and other changes in Medicaid that could result in coverage losses. Reductions or limits in Medicaid disproportionately affect people of color and low income individuals and would widen coverage disparities by race and ethnicity and income. The implementation of work requirements may also disproportionately affect certain groups with lower rates of work like older adults, people with disabilities, and women.41 In addition, the Trump administration has begun phasing out and changing the direction of some payment and delivery system reforms, which may reduce resources to address social determinants of health.42 The administration also has signaled for reductions in funding for prevention and public health, which has already experienced reductions through cuts to the Prevention and Public Health Fund over the last several years.43,44