People in rural areas face unique challenges in health care coverage and access, including low density of providers and longer travel times to care, limited access to employer-sponsored coverage, and greater health care needs due to older age and lower income. Medicaid plays an important role in helping to address these challenges. This brief provides insight into the role of Medicaid in rural areas and discusses how expansions or reductions in Medicaid such as those currently under debate could affect rural areas. The analysis is based on data from the 2013-2015 American Community Survey and classifies counties as “rural” based on an Index of Relative Rurality (IRR). We group counties into quintiles of rurality and define those with the highest degree of rurality as “rural,” those with the lowest degree as “urban,” and those in the middle as “other.” While Medicaid provides assistance to many low-income elderly individuals, primarily as a wrap-around benefit to Medicare, this analysis focuses on its role in covering nonelderly children and adults. The analysis shows that Medicaid plays a particularly important role providing coverage in rural areas and that gains in Medicaid coverage have helped reduce the uninsured rate in rural areas. More detail on the methods underlying the analysis is available in the “methods” box at the end of the brief.

Where is Rural America and Who Lives There? 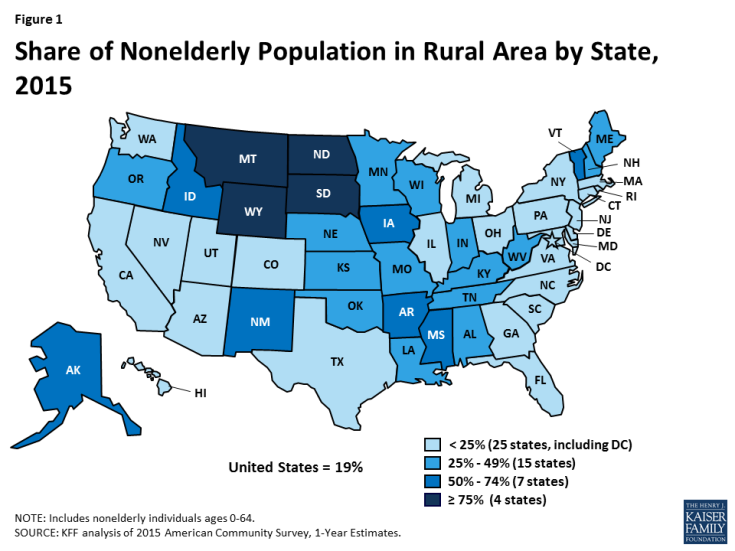 Figure 1: Share of Nonelderly Population in Rural Area by State, 2015 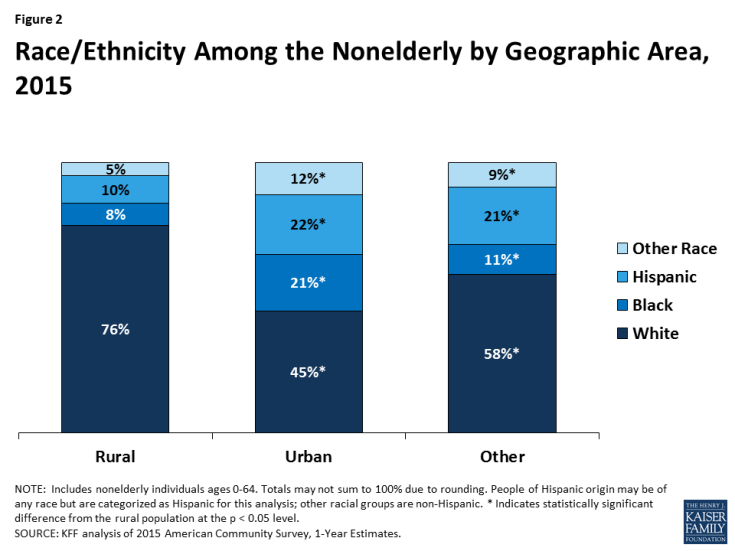 Figure 2: Race/Ethnicity Among the Nonelderly by Geographic Area, 2015 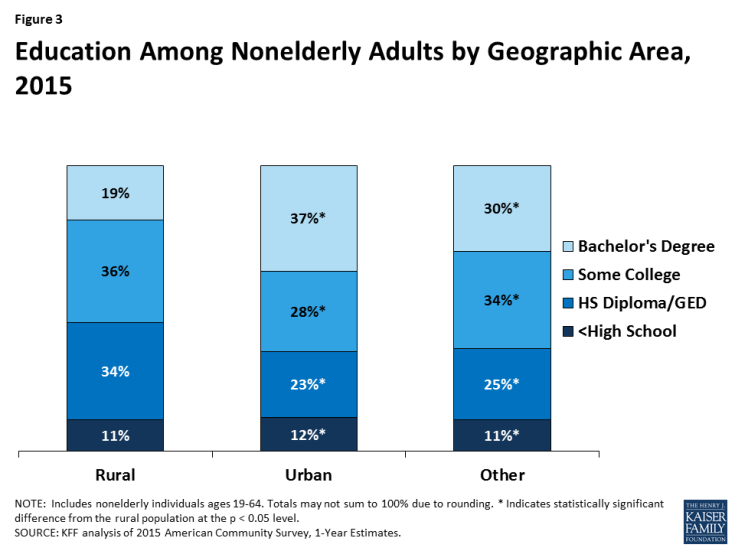 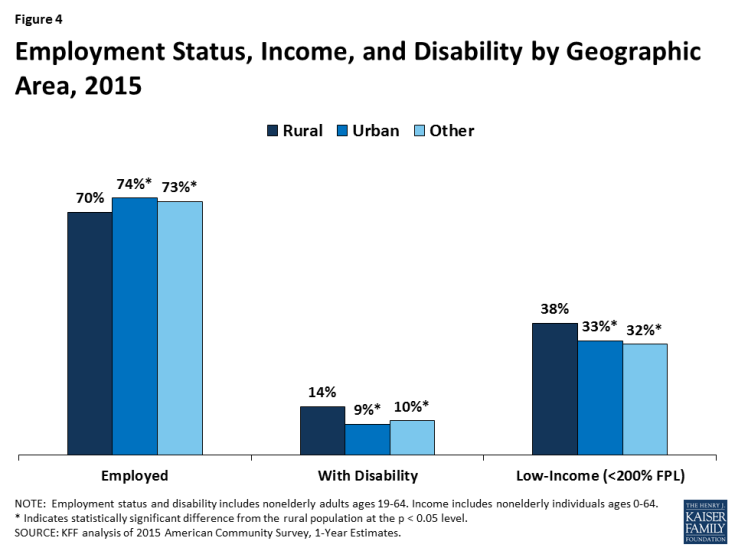 Rural populations face longstanding and significant disparities in their health and access to health care. Previous research has shown that rural residents are more likely to report poorer physical and mental health and have higher rates of cigarette smoking, obesity, and physical inactivity compared to their urban counterparts.2 In addition, people living in rural areas face significant barriers to accessing care, including provider shortages, recent closures of rural hospitals, and high travel distances to providers.3

What role does Medicaid play in rural America? 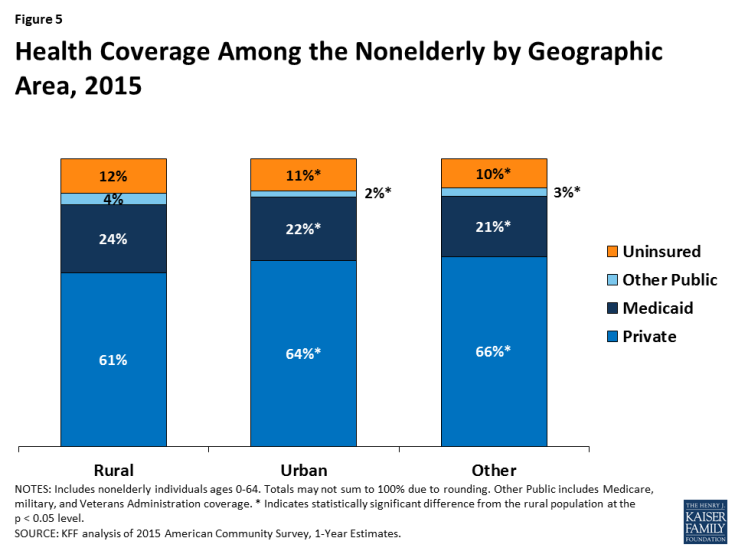 Figure 5: Health Coverage Among the Nonelderly by Geographic Area, 2015 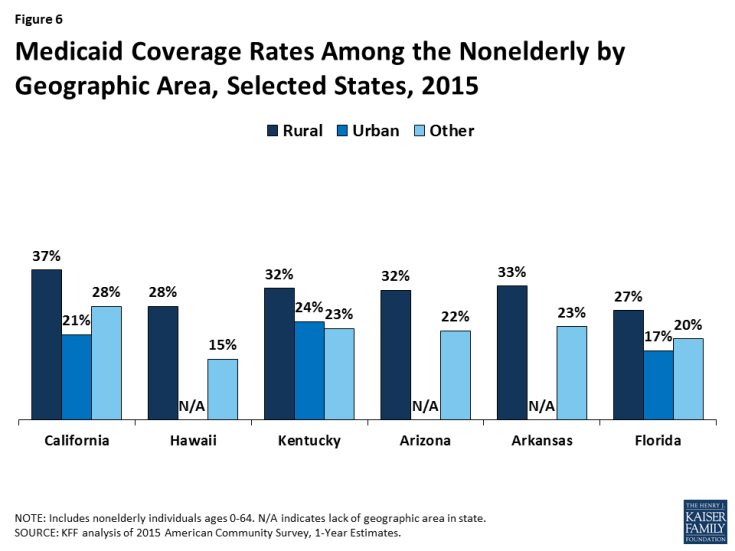 How did Medicaid coverage in rural areas change under the ACA? 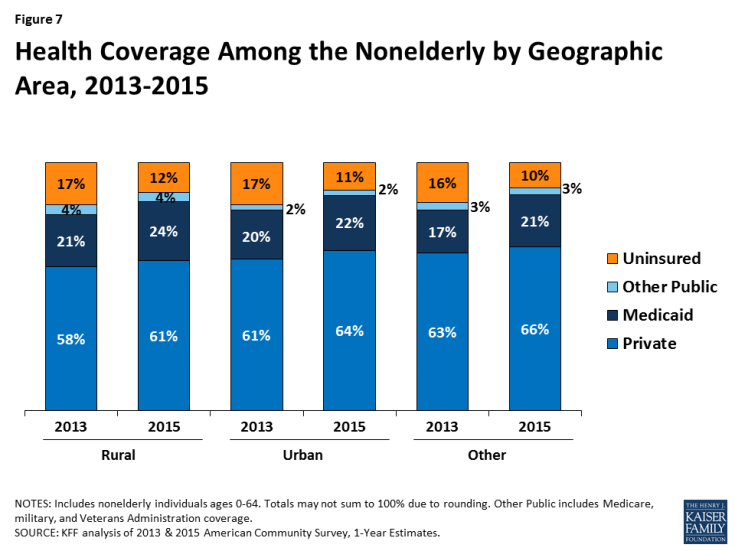 Figure 7: Health Coverage Among the Nonelderly by Geographic Area, 2013-2015 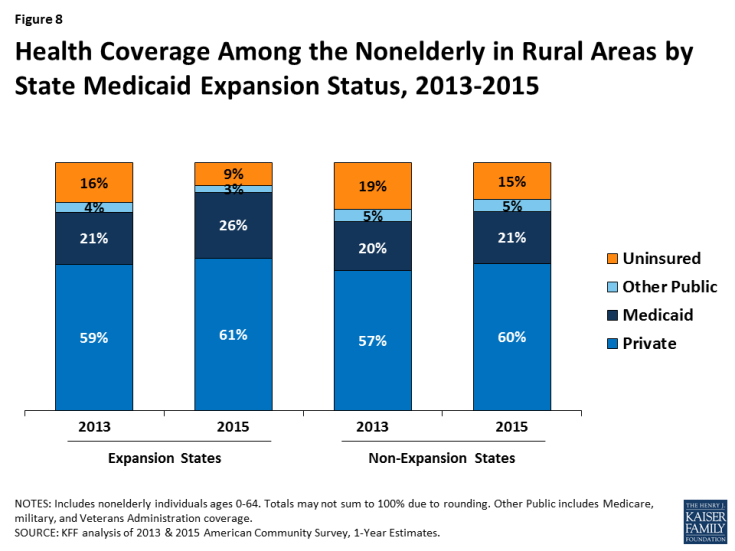 Reductions in Medicaid could disproportionately affect individuals living in rural America. If federal funding for Medicaid is reduced through elimination of enhanced funding for the ACA Medicaid expansion or limits on funding for the broader program, states would likely need to increase state spending to maintain coverage or make program cutbacks that would reduce eligibility, benefits, or provider payments. Given the larger role Medicaid plays for individuals in rural areas compared to other areas, individuals in these areas would likely be disproportionately impacted by coverage losses as well as reduced benefits and increased premiums and cost sharing. Further, analysis shows that high poverty states and states in the South, which include many rural areas, would be disproportionately impacted by reductions in federal Medicaid funds and face the highest increases in state spending to maintain coverage amid federal reductions. Reductions in Medicaid coverage would also increase demands on safety net providers, including community health centers and public hospitals. At the same time, the loss of federal Medicaid revenues would increase fiscal strains on these providers who already face a range of challenges that have contributed to increases in closures among rural hospitals in recent years.6