Taking a Look at 988 Suicide & Crisis Lifeline Data, One Month After Launch

On July 16, 2022, the federally mandated crisis number, 988, became available to all landline and cell phone users, providing a single three-digit number to access a network of over 200 local and state funded crisis centers. 988 users who are suicidal or experiencing a behavioral health emergency are routed to the 988 Suicide & Crisis Lifeline (formerly the National Suicide Prevention Lifeline) and connected to a crisis counselor where they may receive crisis counseling, resources and referrals, and in some cases and where available, mobile crisis units may be dispatched. Despite some early reports of public hesitancy toward 988, a recent KFF/CNN poll finds that among those that knew about 988, 85% say they would be at least somewhat likely to call the hotline if they or a loved one were experiencing a mental health crisis; however, less than half of people know about 988. Nearly half a million lives (480,622) were lost to suicide between 2010 to 2020 and an additional 47,646 lives were lost in 2021, reflecting a recent rise in suicide rates.

It was expected that Lifeline’s call, text, and chat volume would increase rapidly after the launch of 988, but there were some concerns about its capacity. Some estimates predicted a threefold increase in volume, up to 12 million calls, text, and chats in the first year alone. The federal government and some states made investments to improve network operations and local crisis call center capacities, including hiring and training staff, in preparation for 988’s launch. In this brief, we examine 988 implementation using data available through Lifeline and summarize additional metrics that may be useful for monitoring the implementation and performance of the program.

What do we know about 988 implementation?

Lifeline’s 988 calling code became nationally available on July 16, 2022, enabling callers to connect with local crisis counselors using the easy-to-remember three-digit number. When the local crisis call center is unavailable or the wait is too long, callers are redirected to out-of-state Lifeline overflow call centers. Users can also text 988, but most texts go to Lifeline text/chat centers as many local call centers do not currently support texting. Chat is also available to users and can be accessed through an internet browser on Lifeline’s website. Some crisis call centers still have direct phone numbers, as do crisis centers that are not part of the Lifeline network, and some users may choose to call those numbers instead of 988.

National 988 metrics are publicly available and include national totals or averages for call, text, and chats—including data for outreach volume, answer rates, abandoned calls, average waiting times, and average call length. Lifeline also provides state-level data, but only for calls, including how many calls are routed, received, answered, abandoned, sent to backup centers, and wait times. Data from the Veterans Crisis Line are not publicly available. In this analysis, we compare national and state-level Lifeline performance metrics from the first full month after the launch of 988 (August 2022) to the same month from a year before (August 2021). The comparison of August 2022 to the same month the year before allows us to account for any seasonal fluctuations in suicide and call volume.

There was a sizable jump in calls and texts following 988’s implementation in mid-July 2022, followed by slower growth in August 2022. There was a 28% increase in calls, texts, and chats in July 2022, the month that 988 was implemented, compared to the month before, but the growth slowed in August, to a 2% increase. Comparing August 2021 to August 2022, we find that the combined number of calls, texts, and chats increased by over 112,000 (a 45% increase), of which over 84,000 were calls. Over the same period, the number of texts increased more than seven-fold, from 5,276 to 40,627. Conversely, chat volume decreased by 10%, possibly because text communication is preferred over chat, which is held inside a browser chat window, as opposed to texting via cell phone (Figure 1). Before the launch of 988, Lifeline offered text and chat messaging, but capacity was only sufficient to handle 56% of text messages and 30% of chats.

In all but two states, more people called Lifeline after the launch of 988, with increases ranging from 10% in Indiana to 123% in Hawaii. Comparing data from August 2022 to the same month in 2021 before 988 implementation, we find that call volumes increased in almost all states but dropped in two states–West Virginia and North Dakota (Figure 2). Some projections predict that this growth may continue and the total volume of calls, text messages, and chats could double or triple by the end of the first year. State-level data does not include chat or text indicators.

Despite the substantial increase in overall call, text, and chat volume after 988, answer rates improved or held steady and people spent less time waiting to speak with a counselor. Although the combined number of calls, texts, and chats increased over 112,000 between August 2021 and August 2022 (a 45% increase), the overall answer rate improved, going from 67% to 88% in the same period. Answer rates for calls, which represent most of the outreach volume, increased slightly to 84% in 2022, up from 82% in 2021. Chat and text response rates increased the most, reaching 97% or higher, compared to 30% for chats and 63% for text in August 2021. (Figure 2). Further, people who reached out to 988 spent less time waiting on hold for a counselor, as the average wait time for all methods combined decreased from 2 minutes and 30 seconds to 42 seconds.

Most states answered a greater percentage of incoming crisis calls after 988, but there was state variation. 988 uses the caller’s area code, rather than geolocation, to route the call to the crisis center closest to that area code. This may pose challenges if the area code does not reflect the caller’s residence. An “in-state answer rate” is a measure of the percentage of calls answered within state borders. Calls that are not answered locally are routed to an out-of-state overflow facility or are abandoned by their caller. Due to their unfamiliarity with local resources, overflow facilities may have difficulty connecting callers with resources or extra assistance. Nationally, about 5% of calls are transferred to overflow facilities and 11% are abandoned by the caller. The in-state answer rate increased in almost every state, with particularly large increases in Illinois, Wyoming, and Minnesota. However, answer rates declined in four states — Florida, Wisconsin, Arkansas, and South Carolina (Figure 3). The decline in answer rates for these states may be explained by rapid increases in call volume, coupled with little state legislative momentum around 988 initiatives. As of September 2022, none of the four states with declining answer rates had enacted legislation to support the implementation, funding, or study of 988.

Callers to Lifeline in 35 states spent less time talking to counselors after 988 launched, but the implications of these results are unclear. In two-thirds of states, the average state call length decreased. Nationally, average call length decreased by more than a minute, from nearly 13 minutes in 2021 to less than 12 minutes in 2022, though there was wide variation by state (Table 2). However, it is unclear how to interpret these data for several reasons. While speed of call is not a primary goal for crisis counselors, it can indicate when additional training is needed. According to Lifeline’s metrics guidebook, crisis counselors with considerably shorter than average call times may require additional “coaching on developing rapport or engaging more collaboratively with the caller.” Using current data, it is difficult to determine whether the average call time decreased across the board or whether a subset of counselors, perhaps those with less experience, had shorter interactions leading to a reduction in overall call times.

What data beyond lifeline could help inform implementation and improvement efforts?

Additional state and national crisis center metrics may help inform the 988 implementation and future program improvements. Call volume, wait times, and other metrics from Lifeline provide some insights into accessibility and demand for 988, but they don’t tell the whole story. For example, without additional data, we can’t answer questions such as—

Comprehensive metrics can aid policymakers and researchers in evaluating the effectiveness of 988 implementation, identify gaps, and develop targeted interventions or policies to fill them. Table 1 contains metrics compiled from existing sources that may be useful for understanding 988’s implementation.

Some states or crisis call centers already track and display detailed crisis metrics through regularly updated dashboards. These online dashboards display key metrics of crisis call data, refreshed every 24 hours. In Arizona, the Solari Crisis Response Network displays aggregate data for crisis call centers in two regions. Similarly, the University of Utah summarizes Utah’s crisis data in a dashboard and in crisis services annual reports (2021 and 2020). Data presented on these dashboards are more detailed than Lifeline data, containing metrics on accessibility, referral source, reason for the call, and some outcomes, but they do not contain historical summaries (Figure 4). 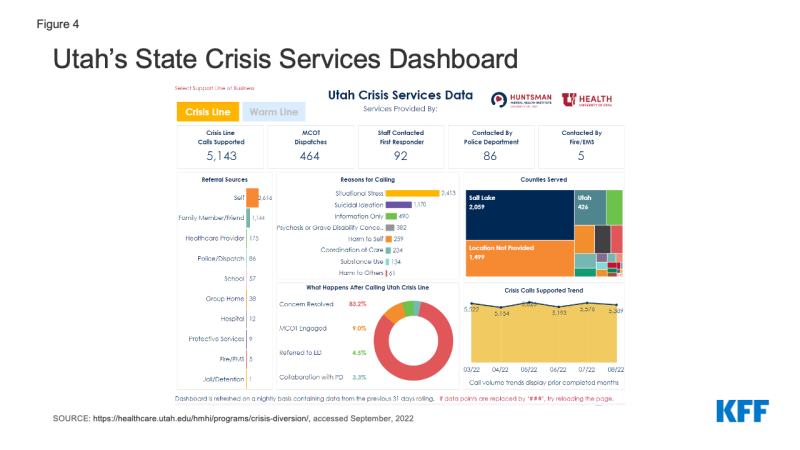 Lifeline volume increased substantially following 988’s implementation, a trend that will likely continue as public awareness grows. Data reported following 988’s implementation suggests that, at the national level, 988 is keeping up with demand in terms of outreach volume, wait times, and answer rates, but there is state variation. Especially in some states without long-term funding strategies, it is unclear whether Lifeline call centers can maintain their pace as demand increases. According to the National Academy for State Health Policy, 13 states have enacted legislation for 988 sustainability through state general funds or telecommunications fees. In addition to 988 implementation, some states are simultaneously developing and building out their behavioral health crisis continuum to connect those in crisis with additional services like mobile crisis units or crisis stabilization, where appropriate.

Publicly available Lifeline data only capture a small slice of metrics needed to understand implementation, identify gaps, and identify policies and interventions to address shortfalls. Demographic data would allow for evaluation of 988 from an equity perspective. While not necessarily insurmountable, logistic challenges and privacy concerns may make it difficult to collect this information during all emergency calls. The accessibility, reach, quality, equity, and impact of 988 services and outcomes will be revealed more clearly as 988 metrics and data standards improve and additional data become available.

If you or someone you know is struggling or in crisis, help is available. Call or text 988 or chat 988lifeline.org

This work was supported in part by Well Being Trust. KFF maintains full editorial control over all of its policy analysis, polling, and journalism activities.