Global health donors, such as the U.S., provide funding and other support primarily through two types of channels: bilateral (i.e., country-to-country) and/or multilateral (i.e., multi-country, pooled support often directed through an international organization). Donors make different choices about the distribution of their global health support between these two mechanisms, and these choices may change over time due to political, technical, or other considerations.1 While the U.S. has decidedly been a bilateral donor to global health (channeling 81% of current global health assistance bilaterally), it has helped to found, and serves as a key donor to, several major multilateral health organizations. These include some of the first international health organizations, such as the Pan American Health Organization (PAHO) in 1902 and the World Health Organization (WHO) in 1948, and newer partnerships, such as Gavi, the Vaccine Alliance (Gavi) in 2000 and the Global Fund to Fight AIDS, Tuberculosis and Malaria (Global Fund) in 2002. These multilateral organizations have contributed significantly to improvements in global health2 and, in some cases, serve as key components of the U.S. global health response. This response includes financing, governance, oversight, and technical assistance.

Multilateral global health organizations are those jointly supported by multiple governments and, often, other partners (versus bilateral efforts, which are carried out on a country-to-country basis). Examples include:

Still, U.S. support for multilateral institutions has fluctuated over time, reflecting, in part, changing U.S. leadership views on the relative value of bilateralism versus multilateralism. Following a period of increasing U.S. support for multilaterals, particularly during the Obama Administration, the Trump Administration has signaled skepticism about such engagement, requesting less funding for international organizations (including multilateral health organizations) and withdrawing from several multilateral agreements.3 Even so, our polling shows that most Americans – in fact, an increasing percentage – believe the U.S. should be working in coordination with others on international health efforts (see Americans’ Views on the U.S. Role in Global Health).

With ongoing questions about future U.S. support for multilateral health efforts as well as important markers on the near horizon, including donor replenishment conferences for both the Global Fund and Gavi within the next two years, this brief highlights five key facts about U.S. engagement with multilateral global health organizations. It focuses on those organizations to which Congress specifically directs funding (there are eight, including five U.N. entities; see Box 1) but is not meant to be an exhaustive review of all multilateral health initiatives in which the U.S. may participate.

The amount of U.S. global health funding directed multilaterally varies each year but has generally grown over time, both in amount and as a share of the U.S. global health budget. The U.S provided initial support for Gavi (launched in 2000) and the Global Fund (launched in 2002), while continuing its support for U.N. health agencies, and U.S. funding to multilateral global health organizations has generally increased over time since then. From FY 2008 through FY 2018, U.S. multilateral health funding5 increased from $1.2 billion to $2.0 billion, with a peak of $2.2 billion in FY 2014 (see Figure 1). This represents funding specified by Congress in appropriations for contributions to the five U.N. entities identified in Box 1 – provided as “regular,” “core,” or “assessed” contributions6 (generally used to support essential functions and operations) and contributions to Gavi, the Global Fund, and the TB Global Drug Facility. More recently, general budget pressures led to a flattening of U.S. global health funding, including for multilateral efforts. 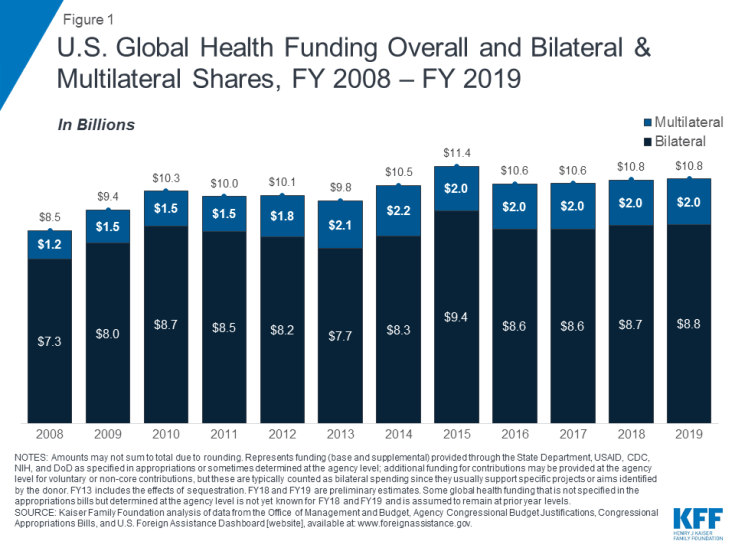 As a share of the U.S. global health budget, multilateral funding has also increased over time, rising from 15% in FY 2008 to 19% in FY 2018 (its high point was 21% in 2013 and 2014); see Table 1. This growth in part reflected an increased emphasis placed on multilateral cooperation by the Obama Administration, as well as growing support in Congress.

However, this is not always the case, and U.S. contributions to multilaterals can change over time. For example, while the U.S. helped to found the United Nations Populations Fund (UNFPA) in 1969 and was a leading supporter for many years, its support has fluctuated significantly over the years, due to ongoing political debates about abortion. Most recently, the Trump Administration determined it would withhold U.S. support to the agency, invoking the Kemp-Kasten Amendment of U.S. law to do so (see KFF’s explainer).11 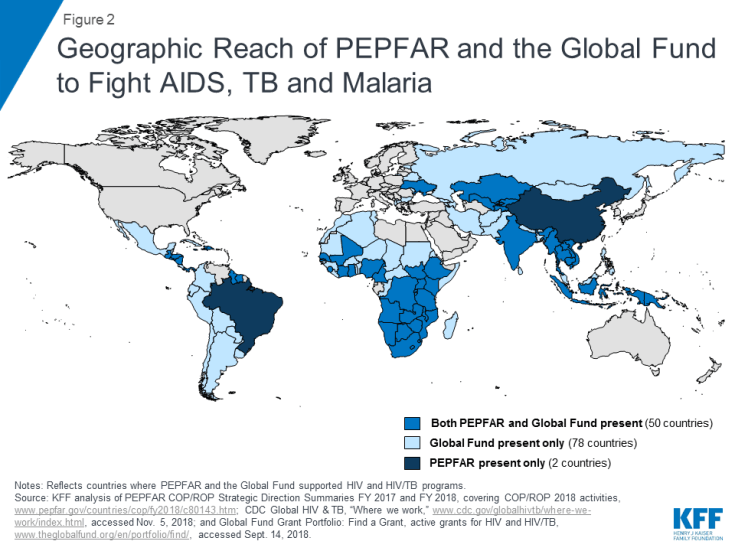 Figure 2: Geographic Reach of PEPFAR and the Global Fund to Fight AIDS, TB and Malaria

The U.S. government shapes multilateral global health efforts not only through funding but also through its participation in governance structures and the development and execution of technical and standard-setting guidance, agreements, plans, and programs:

5. The next two years will reveal much about U.S. commitment to multilateral health engagement.

With several key international meetings and replenishment conferences on the horizon, the next two years will provide a number of opportunities for assessing the level of U.S. commitment to multilateral global health efforts. For example:

It will be important to keep these key facts in mind over the next two years, as discussion and debate over U.S. contributions to these and other multilateral health institutions continue.