Global recognition of the threat of epidemic and pandemic diseases has grown over time, with the emergence of the HIV/AIDS epidemic in the 1980s marking a major turning point. Since then, multiple other new human infectious diseases have been identified (e.g., SARS, MERS), while other diseases have “re-emerged,” causing greater numbers of cases than before and/or affecting different populations and regions (e.g., dengue fever and Ebola). Still others have developed resistance to available treatment (e.g., multi-drug resistant tuberculosis) or been newly linked to adverse health outcomes (e.g., Zika) (see Table 1).

While not every emerging infectious disease has major public health implications, some result in significant epidemics or global pandemics. Outbreaks can lead to sizeable economic costs and interruptions in trade and travel. For example, SARS resulted in an estimated $30 billion in economic losses (over $3 million per case) in 2003, primarily from reduced commerce, travel and trade, while the 2014-2015 West Africa Ebola epidemic in Guinea, Liberia, and Sierra Leone resulted in an estimated $53 billion in economic losses. Moreover, it is estimated that an influenza pandemic similar in nature to the 1918 influenza pandemic could kill 100 million people worldwide and lead to a loss of up to 4.8% of global GDP.

Concerns about such outbreaks has fueled efforts to improve local, national, and international capabilities to address emerging diseases. For example, in 2005, WHO member states agreed to revise the International Health Regulations (IHR), a long-standing international agreement that outlines roles and responsibilities for countries and international organizations in global health security (see Box 1). The revised IHR, among other things, requires countries to develop minimum capacities to detect, report, assess, and respond to outbreaks and other public health emergencies. More recently, noting that progress on meeting the IHR requirements has been slow and unequal across regions, in 2014, a group of governments and other stakeholders launched the Global Health Security Agenda (GHSA), a multilateral initiative to speed country progress in identifying and addressing gaps in basic global health security capacities (see Box 2). In addition, growing recognition of the importance of global health security to broader economic and social development has been reflected in the inclusion of a global health security objective under the U.N. Sustainable Development Goals (adopted in 2015) as well as by multiple recent endorsements of global health security efforts by the leaders of the G7 and G20.

Despite these and other developments, many countries remain vulnerable to outbreaks. WHO estimates that in 2018, just a third of countries were adequately prepared to detect, report and respond to emerging infectious diseases. Many observers agree that even as the performance of WHO itself in this area has generally improved since its poor response to the 2014-2015 West Africa Ebola epidemic, the organization faces ongoing challenges in its global health security role, such as a broad mandate with limited, inflexible funding and a complex bureaucratic structure that can impede rapid and decisive action (see KFF fact sheet on the U.S. government and WHO).

The U.S. has supported global health security efforts for over two decades.2 Specific policy guidance for federal agencies dates back to a 1996 Presidential Decision Directive on emerging diseases (PDD/NSTC-7), and each subsequent Administration has updated or released new policy and strategic guidance. Most recently, the Trump Administration released the National Biodefense Strategy in 2018 and the Global Health Security Strategy (GHS strategy) in 2019. The biodefense strategy outlines a comprehensive U.S. government approach to addressing biological threats domestically and internationally, while the GHS strategy – the first national strategy focused specifically on U.S. global health security efforts and developed at the direction of Congress – guides U.S. government activities aimed at accelerating capacities of targeted countries to prevent, detect, and respond to infectious disease outbreaks.

As outlined in the GHS strategy, the U.S. government invests in these programs in order to “prevent the spread of human and animal infectious diseases and protect populations at home and abroad” and with three overarching goals:

The U.S. approach centers on bilateral financial and technical support for capacity-building programs in certain partner countries. Specifically, since 2014, the U.S. has focused its efforts in 17 GHSA “partner countries,” although the recent GHS strategy suggests that starting in FY 2020, the U.S. geographic focus may shift, leading to some current partner country programs being shrunk or eliminated and/or others being added, and may incorporate regional approaches in some cases.

In addition, the U.S. approach includes active involvement in multilateral efforts related to global health security, including playing leading roles in the multilateral negotiations for the 2005 revision of the IHR and the development and launch of the Global Health Security Agenda (GHSA), a multi-country partnership designed to help coordinate and accelerate progress toward IHR and global health security goals (see Box 2) in 2014. The U.S. also participates in and supports international responses to outbreaks; for example, it was the largest donor to and supporter of the response to the 2014-2015 West Africa Ebola epidemic, which was the largest Ebola outbreak in history, and is a key donor to and responder to the 2018-2019 DRC Ebola response, which is the second largest Ebola outbreak to date.

The USAID Global Health Bureau’s global health security program helps countries build capacity to identify and respond to dangerous pathogens in animals and humans and to be prepared for outbreaks, including pandemics. Additionally, other USAID global health programs support health systems strengthening, including building surveillance and laboratory capacities that have applications for global health security. In addition, the Office of Foreign Disaster Assistance (OFDA) has often been involved when the U.S. engages in large-scale international outbreak responses.

The Department of Health and Human Services (HHS) is the official U.S. point of contact with WHO for IHR purposes and often represents the U.S. at multilateral meetings on emerging disease topics and helps coordinate U.S. global health security efforts. HHS supports research and development for emerging disease countermeasures (e.g. drugs and vaccines) through the National Institutes of Health (NIH) and the Biodefense Advanced Research and Development Authority (BARDA), while the Food and Drug Administration (FDA) is responsible for regulatory review and approval. The Department of State engages in diplomacy and coordination in support of global health security and is home to the Biological Engagement Program (BEP), a biological security assistance and capacity building effort. The Department of Agriculture (USDA) engages in capacity building for animal health and food safety and supports surveillance and research on animal diseases overseas.

U.S. funding for its main global health security programs has waxed and waned over time, with occasional spikes driven by supplemental funding connected to specific disease events. For example, while funding for global health security generally ranged between $400 million and $500 million over the last decade, it spiked to $1.34 billion in FY 2015, reflecting additional, emergency funding provided in response to the Ebola outbreak in West Africa, and was $552 million in FY 2016 in response to Zika (see Figure 1). The Trump Administration requested $482 million for FY 2020, which would represent a decrease of $22 million (4%) compared to FY 2019. 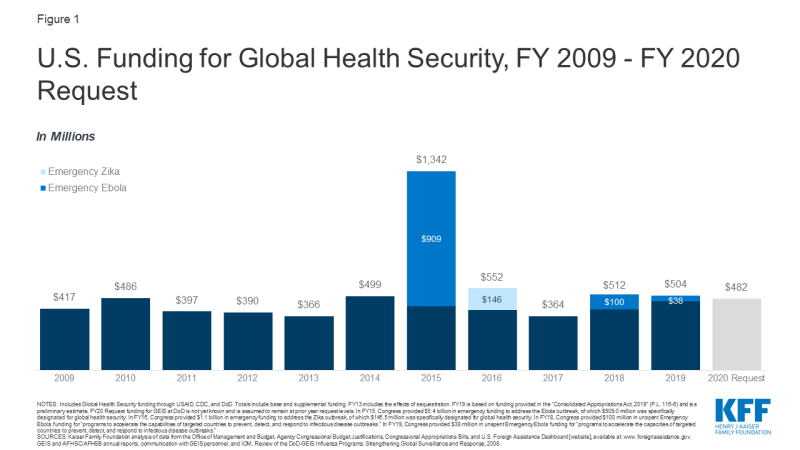 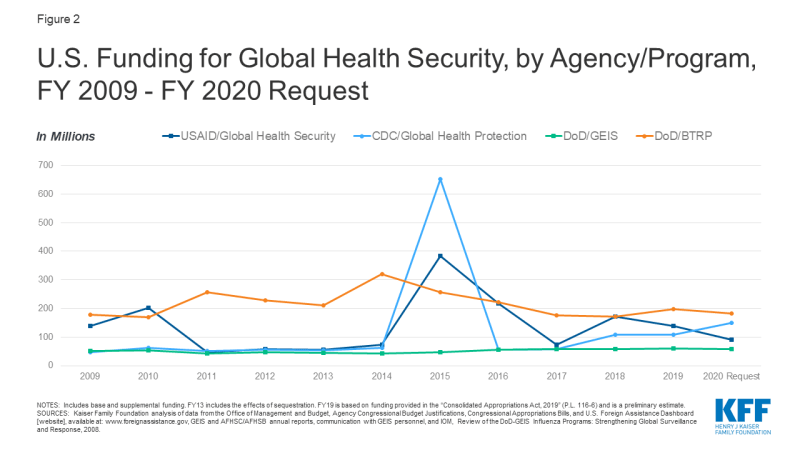 The U.S. has supported global health security activities for more than two decades and remains the single largest contributor to international capacity building. Still, U.S. attention to and funding for global health security have waxed and waned over time, with occasional spikes driven by specific disease events such as Ebola in 2014-2015 and Zika in 2015-2016. Despite the efforts of the U.S. and others to date, global preparedness for epidemics and pandemics remains weak, and therefore, the overarching question for U.S. policymakers is whether the U.S. will sustain or expand its support for global health security activities going forward. The following policy issues are particularly important for the U.S.: