HIV, the virus that causes AIDS (acquired immunodeficiency syndrome), has become one of the world’s most serious health and development challenges. Today, there are approximately 37.9 million people living with HIV, and tens of millions of people have died of AIDS-related causes since the beginning of the epidemic (see the KFF fact sheet on the global HIV epidemic).1
.

Although the U.S. has been involved in efforts to address the global HIV/AIDS crisis since the mid-1980s,2 the creation of the President’s Emergency Plan for AIDS Relief (PEPFAR) in 2003 marked a significant increase in funding and attention to the epidemic.3 PEPFAR, the U.S. government’s global effort to combat HIV and the largest global health program devoted to a single disease, is credited with saving millions of lives and helping to change the trajectory of the global HIV epidemic. It was announced in January 2003 during President George W. Bush’s State of the Union and authorized by Congress that same year through the Leadership Act (see Table 1).The Leadership Act governs PEPFAR’s HIV response, as well as U.S. participation in the Global Fund (an independent, international multilateral financing institution that provides grants to countries to address HIV, TB, and malaria) and bilateral assistance for TB and malaria programs.4 Congress has updated, extended, and made changes to the program through the Lantos-Hyde Act of 2008, the PEPFAR Stewardship Act of 2013, and the PEPFAR Extension Act of 2018, which goes through FY 2023. See Table 1 (see KFF brief on PEPFAR reauthorization).

PEPFAR is overseen by the U.S. Global AIDS Coordinator, who is appointed by the President, confirmed by the Senate, and reports directly to the Secretary of State, as established through PEPFAR’s authorizing legislation.6 The Coordinator, presently Deborah Birx, holds the rank of Ambassador and leads the Office of the Global AIDS Coordinator (OGAC) at the Department of State. Currently the Coordinator is dual-hatted as the U.S. Special Representative for Global Health Diplomacy.7 The Coordinator has primary responsibility for the oversight and coordination of all U.S. global HIV activities and funding across multiple U.S. implementing agencies and departments. In addition, the Coordinator serves as the U.S. Government’s board member to the Global Fund (the U.S. Government holds a permanent seat on the Global Fund’s Board).

In addition to the Department of State, other implementing departments and agencies for HIV activities include: the U.S. Agency for International Development (USAID); the Department of Health and Human Services, primarily through the Centers for Disease Control and Prevention (CDC), Health Resources and Services Administration (HRSA), and National Institutes of Health (NIH); the Departments of Labor, Commerce, and Defense (DoD); and the Peace Corps.8

PEPFAR is currently guided by two main strategies: the overarching strategy laid out in PEPFAR 3.0 – Controlling the Epidemic: Delivering on the Promise of an AIDS-free Generation and a complementary, more targeted strategy for accelerating implementation of PEPFAR efforts in certain high-burden countries laid out in The PEPFAR Strategy for Accelerating HIV/AIDS Epidemic Control (2017-2020). PEPFAR 3.0 focuses on achieving epidemic control (defined by the program to be reached when the total number of new HIV infections falls below the total number of deaths from all causes among people with HIV) of the global HIV epidemic through a focus on transparency, accountability, and impact.9 It also sets five core priorities for the program:

PEPFAR’s 2017-2020 strategy outlines its plan to accelerate implementation in a subset of 13 PEPFAR countries that, according to PEPFAR data, show the greatest potential to achieve epidemic control by 2020: Botswana, Côte d’Ivoire, Haiti, Kenya, Lesotho, Malawi, Namibia, Rwanda, Swaziland, Tanzania, Uganda, Zambia, and Zimbabwe.11 The strategy emphasizes accelerating testing and treatment strategies, expanding prevention, using quality data, engaging with faith-based organizations and the private sector, and strengthening policy and financial contributions by partner countries.12 It is also intended to align with the UNAIDS 90-90-90 targets.13

The latest results reported by PEPFAR indicate that it has, as of September 2018:

The latest results from the DREAMS initiative show declines in new HIV diagnoses among adolescent girls and young women in 85% of the highest HIV burden districts in the 15 African countries implementing DREAMS.16 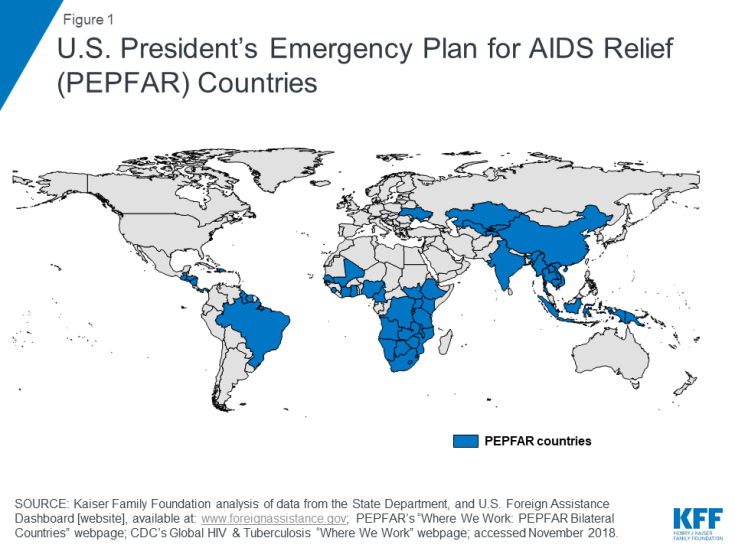 Total PEPFAR funding22 includes all bilateral funding for HIV as well as U.S. contributions to the Global Fund and UNAIDS.23 It represents the majority of U.S. global health funding (62% in FY 2019, or $6.8 billion24) and is the largest commitment by any nation to address a single disease in the world. To date, PEPFAR funding has totaled more than $90 billion.

Of the approximately $6.78 billion appropriated for PEPFAR in FY 2019: 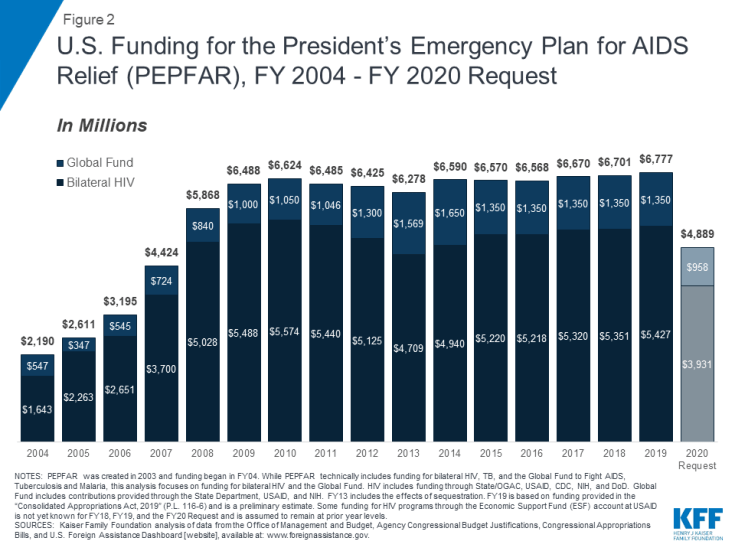 PEPFAR has included several spending directives, or earmarks, from Congress over the course of its history, many of which have changed over time:

The U.S. is the single largest donor to the Global Fund. Congressional appropriations to the Global Fund totaled nearly $18 billion from FY 2001 through FY 2019.28 The Global Fund provides another mechanism for U.S. support by funding programs developed by recipient countries, reaching a broader range of countries, and supporting TB, malaria, and health systems strengthening (HSS) programs in addition to (and beyond their linkage with) HIV.29 To date, over 150 countries have received Global Fund grants; 53% of Global Fund support has been committed to HIV and HIV/TB programs,30 29% to malaria, 16% to TB, and 2% to other health issues.31 The original authorization of PEPFAR, and subsequent reauthorizations, included a limit on annual U.S. contributions to the Global Fund that prevented them from causing cumulative U.S. contributions to exceed 33% of the Global Fund’s total contributions;32 this requirement is in effect through FY 2023 (see fact sheet).33

The U.S. government is the largest donor to international HIV efforts in the world, including the largest donor to the Global Fund,34 and PEPFAR is viewed as one of the most significant and successful global health initiatives ever undertaken. Looking ahead, there are several issues and challenges facing PEPFAR, starting with questions about the extent to which the current Administration will continue to support PEPFAR’s ongoing efforts, particularly in light of its budget proposal to significantly reduce bilateral HIV funding and U.S. contributions to the Global Fund. Other issues and challenges include: