Polio, a highly infectious and sometimes deadly disease that has plagued the world since ancient times,1 is now at very low levels, and today, global polio efforts are focused on sustaining efforts to eradicate the disease, which have already resulted in a 99.9% reduction in cases since 1988 (see Table 1). Progress against the disease has been made possible by the development and expanded use of effective vaccines, particularly the more easily administered and less expensive oral poliovirus vaccine, and mass immunization campaigns (see below).

A global push for polio eradication is underway.4 If polio is eradicated, it would only be the second time in history that a disease affecting humans has been eradicated (smallpox being the other),5 a “once-in-a-generation opportunity for global public health.”6

Poliomyelitis (Polio): A disease affecting the central nervous system that is caused by infection with the poliovirus; it can lead to partial or full paralysis and sometimes death in a matter of hours. Survivors are often affected by post-polio syndrome, which causes progressive muscle weakness and atrophy as well as fatigue. While there is no cure for polio, vaccination against the disease can prevent infection and its spread.

The development of effective vaccines against polio in the 1950s and 1960s led to their widespread use in many industrialized countries, including the United States, and resulted in the elimination of polio in a number of countries. These early successes suggested that global polio eradication (through the use of mass immunization campaigns) might be achievable.7 Soon thereafter, in 1988, the World Health Assembly launched the Global Polio Eradication Initiative (GPEI) – constituted as a public-private partnership led by national governments and spearheaded by the World Health Organization (WHO), Rotary International, the U.S. Centers for Disease Control and Prevention (CDC), the United Nations Children’s Fund (UNICEF), and the Bill & Melinda Gates Foundation – to work toward this goal.8 GPEI partners have invested approximately $16.6 billion globally in eradicating the disease.9

In 2012, the World Health Assembly stated that successfully eradicating polio was a “programmatic emergency for global public health,” given ongoing challenges that threatened the gains that had already been made.10 More recently, in 2014, WHO declared the continued spread of polio a “public health emergency of international concern” due to the global risks posed by the disease; under the International Health Regulations, this declaration required certain countries to heighten their efforts against polio.11 See the KFF fact sheet on WHO.

Since 1988, the global effort to interrupt transmission of wild poliovirus (WPV, the cause of polio) has seen successes and setbacks. The virus was gradually eliminated across the Americas (in 1994), the Western Pacific (in 2000), Europe (in 2002), and South-East Asia (in 2014).12 Still, in other regions, it remained endemic in some countries. Today, the virus continues to be endemic in three countries: Afghanistan, Nigeria, and Pakistan (see Table 1). In addition, polio-free countries must remain vigilant to prevent reintroduction of the virus, which can lead to re-establishment of polio transmission.13 Importation of the virus from another country is a continuing threat, with countries stretching across west Africa to central Africa to the Horn of Africa most often affected.14

Current efforts in endemic countries focus on interrupting transmission of the remaining type of wild poliovirus: WPV 1. (The other WPV types, WPV 2 and WPV 3, have been declared eradicated as of 2015 and 2019, respectively.15) In 1 of 200 persons infected with wild poliovirus, permanent paralysis (usually of the legs) occurs, and of these, 5-10% die when paralysis affects the respiratory muscles.16 The disease is most prevalent among underserved populations in developing countries, typically striking children under five who live in poverty and who lack access to clean water, good sanitation, immunization and other health services. Young children are more vulnerable to and disproportionately affected by polio.17

Several strategies are important in preventing the spread of polio:

Mass immunization, which is designed to complement the individual protection provided by routine immunization and build herd immunity,20 is intended to immunize children under five who have not been immunized or may only be partially protected, while also boosting the immunity of children who have been immunized. It is only through high levels of sustained herd immunity that virus transmission will stop. A large cadre of volunteers vaccinates thousands, and often millions, of children during these campaigns.

Vaccine Switch. Eventually, polio efforts will transition from using OPV to using only inactivated poliovirus vaccine (IPV) through a phased process over several years. Introducing IPV will help eliminate outbreaks caused by circulating vaccine-derived polioviruses (cVDPV) (see Table 1) and other VDPV, since OPV includes live, weakened poliovirus, while IPV does not.21 A key step in this transition from OPV to IPV was making a “switch” from OPV that targets all three types of wild poliovirus to OPV that targets the remaining two types of wild poliovirus (WPV 1 and WPV 3). For most countries, this switch occurred beginning in April 2016, preceded by efforts to introduce at least one dose of IPV into routine immunizations in order to maintain immunity against WPV 2.22

Although the polio vaccine is relatively inexpensive, challenges persist in delivering the vaccine to the most at-risk populations in endemic regions, as affected areas are often geographically remote and struggle with extreme poverty, conflict, and religious or other social barriers that hamper the ability of health care workers to reach all children who need to be vaccinated. Attacks on health care workers engaged in polio vaccination activities, most recently in Pakistan, have highlighted security concerns that threaten continued progress. To address some of these challenges, approaches have included:

With the Polio Endgame Strategy 2019–2023, key public and private stakeholders agreed to redouble efforts in the remaining endemic countries and to adopt a strategy for attaining the goal of eradicating polio (specifically, WPV) by 2023 that responds to current challenges while also preparing for a post-polio world.24 Although eradication of WPV is still several years away, polio stakeholders have begun to plan for a post-polio world,25 which will require efforts to transition but maintain polio assets (e.g., polio surveillance systems), document lessons learned, and complete the task of eradication by addressing VDPV.

Polio eradication is also a major milestone in the Global Vaccine Action Plan 2011-2020,26 which outlines a vision for delivering universal access to immunization by 2020 as part of the “Decade of Vaccines” effort,27 as first called for by Bill and Melinda Gates in 2010.28 The Gates Foundation is also the largest contributor to the GPEI.29

The U.S. has long been a leader in supporting global polio eradication, with the Centers for Disease Control and Prevention (CDC) and the U.S. Agency for International Development (USAID) engaged in efforts to assist affected countries through bilateral activities as well as the GPEI. In recent years, growing international attention to progress made toward eradication has led the U.S. to emphasize the urgency of sustaining efforts until eradication is achieved and spurred U.S. involvement in new collaborations aimed at better reaching the areas and populations most affected by new cases. In 2009, President Obama launched a new joint effort with the Organization of Islamic Cooperation (an inter-governmental organization with 57 member-states spread over four continents) to eradicate polio globally, bringing high level support to efforts to counter the disease in endemic countries with large Muslim populations.30 The resulting 2010 joint work plan aimed “to strengthen diplomatic advocacy, technical support and resource mobilization” on the part of the U.S. government and OIC member-states.31

The U.S. government has signed onto the Polio Endgame Strategy 2019–2023, which included the global goal of eradicating polio and preparing for a post-polio world.32 Additionally, protecting children from polio by ensuring they are fully immunized is part of the U.S. government maternal and child health strategy.33

CDC and USAID are the major implementing agencies for U.S. global polio efforts, with CDC serving as the U.S. lead agency. The Department of State and the National Institutes of Health (NIH) also play important roles in the U.S. response.

CDC’s efforts focus on technical and financial assistance for efforts to interrupt WPV transmission. In addition to its polio surveillance expertise,34 it offers field support through the deployment of public health professionals to polio-affected areas who support capacity building of surveillance and laboratory networks, immunization campaign planning and monitoring, social mobilization, and other activities.35 In December 2011, CDC activated its Emergency Operations Center to “support the final push for polio eradication.”36

USAID provides technical support to country partners in immunization campaign planning and implementation, social mobilization and communications efforts, and strengthening surveillance and monitoring systems.37 The agency’s early polio efforts focused on Latin America in the late 1980s and early 1990s, until the disease was eliminated in the region.38 Since 1996 it has supported and worked with the Global Polio Eradication Initiative.39 The Department of State supports U.S. efforts through diplomatic initiatives to engage political and community leaders in affected areas.40 NIH and CDC efforts also focus on encouraging research into and adoption of new polio vaccines.

Additionally, the U.S. works closely with international institutions and other partners, including the World Health Organization (WHO), the United Nations Children’s Fund (UNICEF), and Rotary International. It is also the second largest donor to the Global Polio Eradication Initiative, having contributed over $3.3 billion since its launch in 1988.41

Most U.S. funding for polio is provided through CDC’s global immunization program (more than 70% in FY 2020). Additional polio funding is provided under the maternal and child health (MCH) program at USAID. See the KFF fact sheet on U.S. MCH efforts. 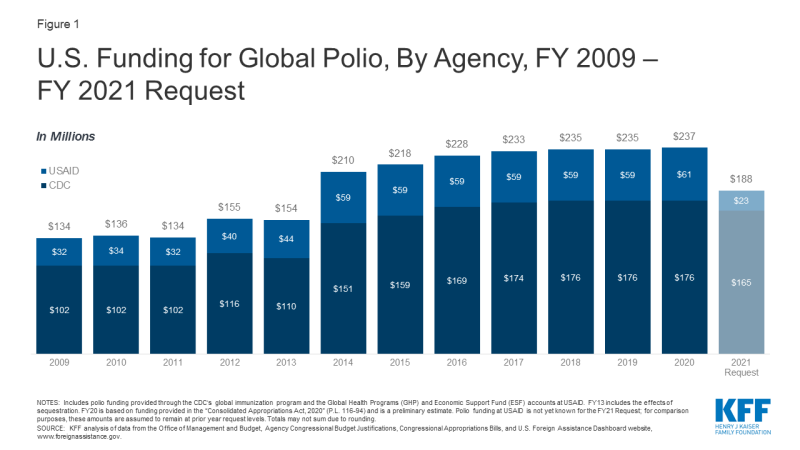 Increased attention to polio, when coupled with global partnerships and the availability of effective interventions, offer a unique opportunity to eradicate an infectious disease affecting humans for only the second time in history. However, with continued insecurity and difficulty accessing hard-to-reach areas in some of the remaining endemic areas and other ongoing challenges, concerns about how to not only sustain gains made but also eliminate the final reservoirs of the poliovirus exist. Additionally, there is growing concern that the coronavirus pandemic may significantly affect these efforts, with GPEI pausing immunization campaigns until June 2020 and making its assets available “to enable a strong response to COVID-19, while maintaining critical polio functions, such as surveillance and global vaccine supply management.”43 Going forward, an overarching question is about the extent to which the current Administration will support global polio efforts, particularly in light of its proposal to reduce polio funding.

To achieve the vision of eradicating polio, securing adequate funding for the final stretch of the Global Polio Eradication Initiative will be important.44 Additionally, the challenge of tackling VDPV is significant; addressing it will require sustained support and resources even after eradication of WPV is achieved and particularly as efforts to secure a post-polio world get underway.