The health of mothers and children is interrelated and affected by multiple factors.1 Millions of pregnant women, new mothers, and children experience severe illness or death each year, largely from preventable or treatable causes.2 Almost all maternal and child deaths (99%) occur in less developed countries, with Africa being the hardest hit region.3 Attention to maternal and child health (MCH) has been growing, under-five and maternal mortality have fallen substantially since 1990, and improving MCH is seen as critical to fostering economic development.

Maternal Health: The health of mothers during pregnancy, childbirth, and in the postpartum period.

Still, as efforts focus on achieving new global MCH goals such as ending preventable deaths among newborns and children under five and reducing global maternal mortality, significant challenges remain. Although effective interventions are available, lack of funding and limited access to services have hampered progress, particularly on maternal health.

Each year, an estimated 5.3 million children under age five – primarily infants – die from largely preventable or treatable causes.4 In addition, approximately 295,000 women die during pregnancy and childbirth each year, and millions more experience severe adverse consequences.5 These challenges are especially prevalent in developing countries (see Table 1). Furthermore, sub-Saharan Africa is the hardest hit region in the world, followed by Southern Asia and South-Eastern Asia; altogether they account for approximately 90% of maternal and under-five deaths.6

More than a quarter (27%) of all maternal deaths are due to severe bleeding, mostly after childbirth (postpartum hemorrhage). Sepsis (11%), unsafe abortion (8%), and hypertension (14%) are other major causes. Diseases that complicate pregnancy, including malaria, anemia, and HIV, account for about 28% of maternal deaths.8 Inadequate care during pregnancy and high fertility rates, often due to a lack of access to contraception and other family planning/reproductive health (FP/RH) services, increase the lifetime risk of maternal death.9 While the percentage of pregnant women receiving the recommended minimum number of four antenatal care visits has been on the rise, it is 52% in developing countries and lower still in sub-Saharan Africa and Southern Asia.10

Complications due to premature births account for more than a third (35%) of newborn deaths, followed by delivery-related complications (24%), sepsis (15%), congenital abnormalities (11%), pneumonia (6%), tetanus (1%), diarrhea (1%), and other causes of death (7%).11 Low birth weight is a major risk factor and indirect cause of newborn death.12

Newborn deaths account for most child deaths (47%), followed by pneumonia (12%), diarrhea (8%), injuries (6%), malaria (5%), measles (2%), HIV/AIDS (1%), and other causes of death (21%).13 Undernutrition significantly increases children’s vulnerability to these conditions, as does the lack of access to clean water and sanitation.14

Key interventions that reduce the risk of maternal mortality include skilled care at birth and emergency obstetric care. Newborn deaths may be substantially reduced through increased use of simple, low-cost interventions, such as breastfeeding, keeping newborns warm and dry, and treating severe newborn infections. When scaled-up, interventions such as immunizations, oral rehydration therapy (ORT), and insecticide-treated mosquito nets (ITNs) have contributed to significant reductions in child morbidity and mortality over the last two decades. Other effective child health interventions include improved access to and use of clean water, sanitation, and hygiene practices like handwashing; improved nutrition; and the treatment of neglected tropical diseases (NTDs). Strengthening health systems and increasing access to services, including through community-based clinics, are also important, and interventions have been found to be more effective when integrated within a comprehensive continuum of care.16

There are several key global goals for expanding access to and improving MCH services, including:

SDGs 2 & 3: Save Mothers and Children’s Lives and End All Forms of Malnutrition

The SDGs are the successor to the Millennium Development Goals (MDGs), which also included MCH targets under MDGs 4 (reduce child mortality) and 5 (improve maternal health).20

Among the global efforts designed to support countries’ progress toward meeting these goals is the Every Woman, Every Child (EWEC) movement and the Scaling Up Nutrition (SUN) movement, which were both launched in 2010. The U.N.-led EWEC movement aims to operationalize the 2015 Global Strategy for Women’s, Children’s, and Adolescents’ Health by combining the efforts of partners who commit to advancing MCH and related efforts with the goal of ending preventable maternal, newborn, child, and adolescent deaths and stillbirths by 2030, among other goals.21 The SUN movement is an initiative that aims to bring together partner efforts to support households and women, in particular, and which recognizes that nutrition, maternal health, and child survival are closely linked.22

The Global Nutrition for Growth Compact includes a goal of reducing stunting in children and nutrient deficiencies in women and children. Endorsed in 2013 by more than 40 developing country and donor governments, including the U.S., as well as other stakeholders, it commits them to, by 2020:23

The U.S. has been involved in global MCH efforts for more than 50 years. The first U.S. international efforts in the area of MCH began in the 1960s and focused on child survival research, including pioneering research on ORT conducted by the U.S. military, the U.S. Agency for International Development (USAID), and the National Institutes of Health (NIH). Early programs included fortifying international food aid with vitamin A (deficiency of which can cause blindness, compromise immune system function, and retard growth among young children) and efforts to control malaria. The U.S. increased support for its child health efforts in FY 1985 when Congress provided $85 million for child survival activities, nearly doubling funding for this purpose. USAID then developed its first maternal health project in 1989 and introduced a newborn survival strategy in 2001.24 More recently, Congress has increased MCH funding, and the U.S. government has adopted a longer-term goal of ending preventable child and maternal deaths by 2035.

USAID serves as the lead U.S. implementing agency for MCH activities, and its efforts are complemented by those of the Centers for Disease Control and Prevention (CDC), NIH, and the Peace Corps. Collectively, U.S. activities reach nearly 40 countries.25

USAID funds a range of MCH interventions (see Table 20,26 and its MCH efforts focus on 25 “priority countries” that are mostly in Africa and Southern Asia.27 With a strategic emphasis on reaching the most vulnerable populations and improving access to and the quality of care and services for mothers and children across U.S. global health efforts, the agency’s near-term goal is to save 15 million child lives and 600,000 women’s lives from 2012 through 2020 in priority countries, which account for about 70% of the global maternal and child deaths.28 Additionally, in 2014, USAID released, for the first time, a multisectoral nutrition strategy that focuses on improving linkages among its humanitarian, global health, and development efforts to better address both the direct and underlying causes of malnutrition and to build resilience and food security in vulnerable communities.29

CDC operates immunization programs, provides scientific and technical assistance, and works to build capacity in a broad array of MCH (and related RH) areas. It also serves as a World Health Organization Collaborating Center on reproductive, maternal, perinatal, and child health.30 NIH addresses MCH by carrying out basic science and implementation research, sometimes in cooperation with other countries.31 The Peace Corps carries out MCH-related volunteer projects around the world.32

Other U.S. global health and related efforts addressing conditions that threaten the health of many pregnant women, new mothers, and children include the President’s Emergency Plan for AIDS Relief (PEPFAR), the President’s Malaria Initiative (PMI), USAID’s NTD Program, Feed the Future, and clean water efforts under the Water for the Poor and Water for the World Acts. See the KFF fact sheets on U.S. PEPFAR efforts, U.S. global malaria efforts, and U.S. global NTD efforts.

The U.S. government partners with several international institutions and supports global MCH funding mechanisms. Among them are: 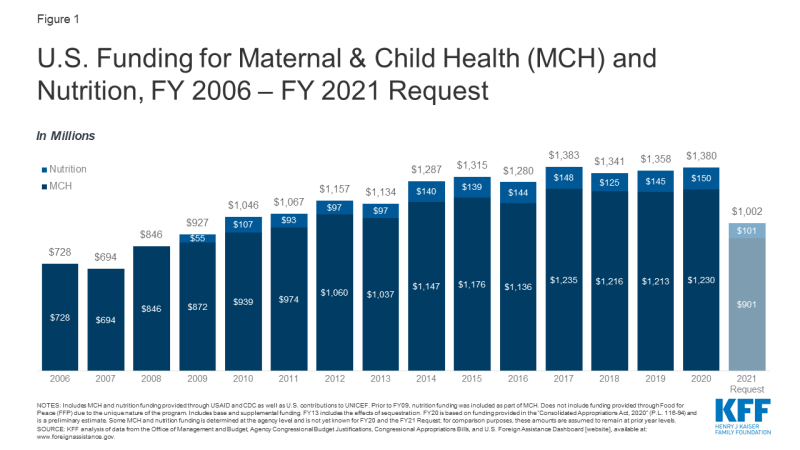 Recent international and U.S. activities have brought new attention to and funding for MCH efforts. As the global community endeavors to support and fund efforts to achieve SDGs 2 and 3’s MCH and nutrition targets, perhaps two of the main questions are about the extent to which the current Administration will support MCH efforts, in light of its proposal to reduce MCH funding, and the strength of bipartisan support in Congress for MCH. Additionally, there is growing concern about the potential impact of COVID-19 on MCH and MCH programming, including on services and disruptions in immunization campaigns. Other key issues and challenges for U.S. efforts include: