The U.S. & The Global Fund to Fight AIDS, Tuberculosis and Malaria

What is the Global Fund?

The Global Fund is an independent, multilateral, financing entity designed to raise significant new resources to combat HIV/AIDS, tuberculosis (TB), and malaria in low- and middle- income countries. First proposed in 2001, the Global Fund began operations in January 2002 and receives funding from both public and private donors to finance programs developed and implemented by recipient countries. The Global Fund uses a “country-defined” and “results-based financing” model that focuses on country ownership and is supported by investments from both donors and implementing countries (by contrast, bilateral support is provided from donors directly to recipient country governments, non-governmental organizations, and other entities and often reflects donor-defined priorities). To date, almost $55 billion has been pledged by all donors (governments, the private sector, and private foundations) to the Global Fund.2 Using these resources, the Global Fund has approved more than $49 billion in grants to over 120 countries.3

In addition to being the Global Fund’s single largest donor (see Table 1), the U.S. maintains a permanent seat on the Global Fund Board, giving it a key role in governance and oversight.6 The Global Fund has been called the “multilateral component” of the U.S. President’s Emergency Plan for AIDS Relief (PEPFAR),7 serving as an important part of the U.S. government’s global health response, expanding its reach to more countries, and leveraging additional donor resources.

Still, there have been ongoing questions about the appropriate balance of U.S. funding between the Global Fund and U.S. bilateral programs, the role of multilateralism in U.S. global health policy, and the Global Fund’s sustainability given a shortfall in the availability of resources to meet country demand.8

The Global Fund was established as an independent foundation under Swiss law and operates as a multilateral financing entity. Funding is pooled from multiple sources, including from donor governments, the private sector, and private foundations. Countries submit proposals to the Global Fund and if approved, funding is provided using a performance-based system where a grant is regularly monitored and evaluated to determine if it should be extended or discontinued based on the effectiveness of the program. The Global Fund launched a new funding model in 2013 that, among other things, created a more flexible timeline for eligible countries to apply and allowed for a focus on high disease burden and low resource settings.10 In order to incentivize recipient countries to increase their domestic investments and increase country ownership, the Global Fund also requires a minimum of 15% co-financing for each approved grant.11

The Global Fund’s organizational structure includes a broad set of stakeholders, and the U.S. government is involved in many of its core structures:

As of July 2019, the Global Fund had approved more than $49 billion in funding and disbursed more than $42 billion to over 120 countries, including countries that also receive U.S. bilateral support for HIV, tuberculosis, and/or malaria, but also many others that do not (see Table 2).13 Funding supports a wide range of care, treatment, and prevention activities and health systems development and strengthening. The Sub-Saharan African region has received the largest share of approved funding (65%), followed by the Asia and the Pacific region (19%).14 Most approved funding has supported HIV programs, followed by malaria and TB (see Table 2). The Global Fund, which was the second largest donor to global health programs in 2017 (the U.S. was the largest),15 estimates that, since 2002, its grants have helped save the lives of 27 million people who would have otherwise died due to complications from AIDS, tuberculosis, or malaria.16

U.S. Engagement with the Global Fund

Congress earmarks support for the Global Fund each year as part of PEPFAR appropriations, and funding is typically provided through the State Department, although funding has also been provided through USAID and NIH in past years. Between FY 2001 and FY 2019, Congressional appropriations to the Global Fund have totaled nearly $18 billion, including $1.35 billion in FY 2019.23 The Trump administration requested $958.4 million for FY 2020, a decrease of almost $400 million.24 Congress has historically matched or provided more to the Global Fund each year than the President has requested. 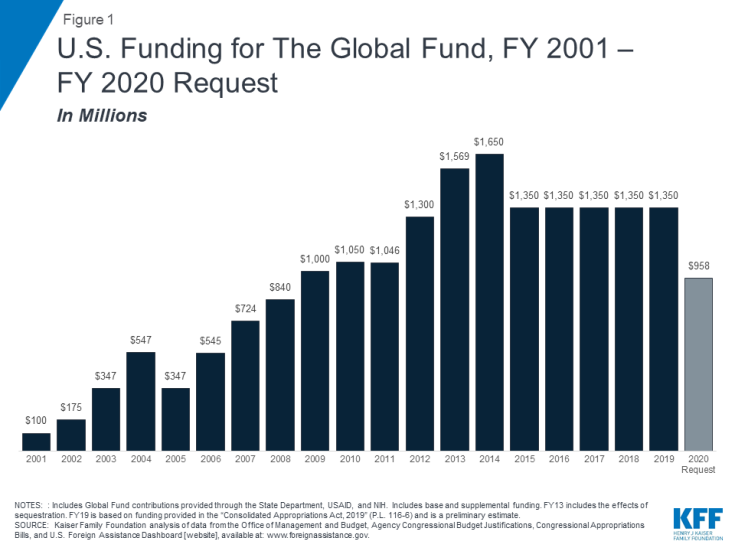 While Congress has provided strong funding support to the Global Fund, it has also placed restrictions on U.S. contributions: 25

While the Global Fund has contributed to significant global scale-up of resources, service delivery, and coverage to combat HIV, TB, and malaria,26 and been described as “complementing PEPFAR objectives,”27 the extent of U.S. involvement in the Global Fund is an ongoing discussion especially as the Administration, Congress, and the Global Fund make decisions in a resource-constrained setting. These issues include: