To help cover out-of-pocket expenses not covered by a health plan, some firms offer high-deductible plans paired with an account that allows enrollees to use tax-preferred funds to pay plan cost sharing and other out-of-pocket medical expenses. The two most common types of accounts are health reimbursement arrangements (HRAs) and health savings accounts (HSAs). HRAs and HSAs are both financial accounts that workers or their family members can use to pay for health care services. These savings arrangements are often (or, in the case of HSAs, always) paired with health plans with high deductibles. This survey treats high-deductible plans paired with a savings option as a distinct plan type – High-Deductible Health Plan with Savings Option (HDHP/SO) – even if the plan would otherwise be considered a PPO, HMO, POS plan, or conventional health plan. Specifically for the survey, HDHP/SOs are defined as (1) health plans with a deductible of at least $1,000 for single coverage and $2,000 for family coverage19, offered with an HRA (referred to as HDHP/HRAs), or (2) high-deductible health plans that meet the federal legal requirements to permit an enrollee to establish and contribute to an HSA (referred to as HSA-qualified HDHPs).20 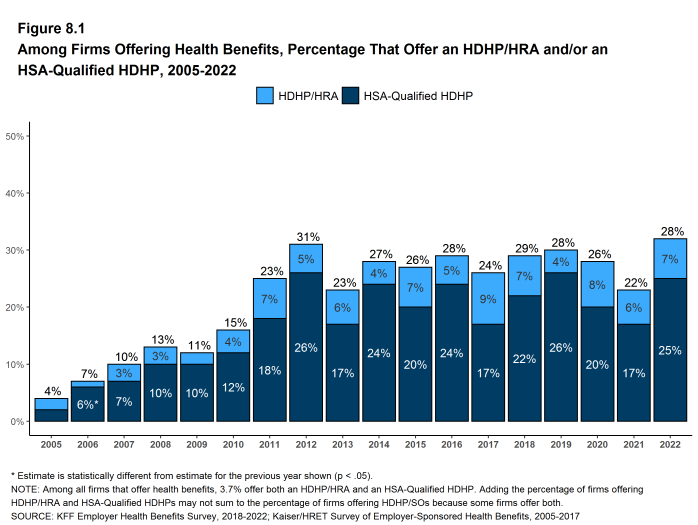 Figure 8.1: Among Firms Offering Health Benefits, Percentage That Offer an HDHP/HRA And/Or an HSA-Qualified HDHP, 2005-2022 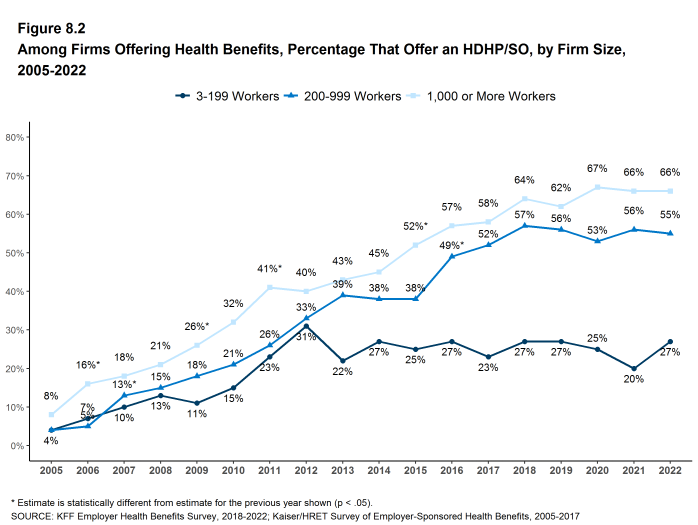 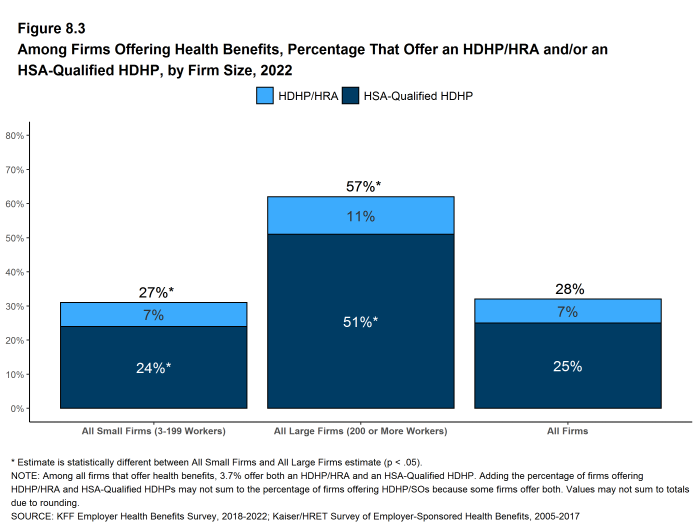 Figure 8.3: Among Firms Offering Health Benefits, Percentage That Offer an HDHP/HRA And/Or an HSA-Qualified HDHP, by Firm Size, 2022

ENROLLMENT IN HDHP/HRAS AND HSA-QUALIFIED HDHPS 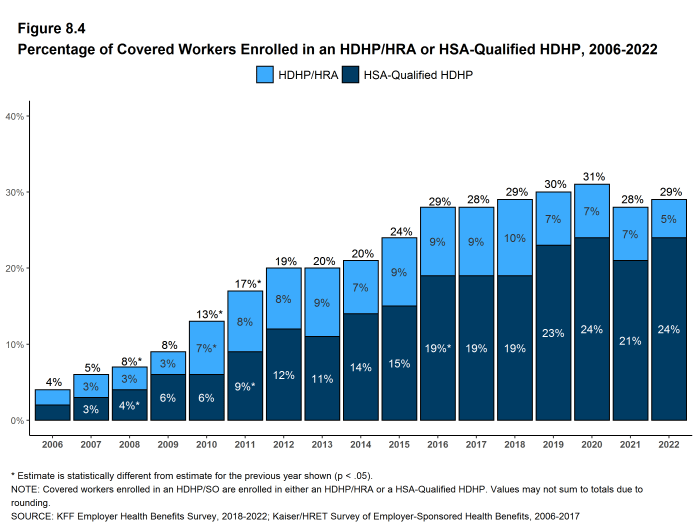 Figure 8.4: Percentage of Covered Workers Enrolled in an HDHP/HRA or HSA-Qualified HDHP, 2006-2022 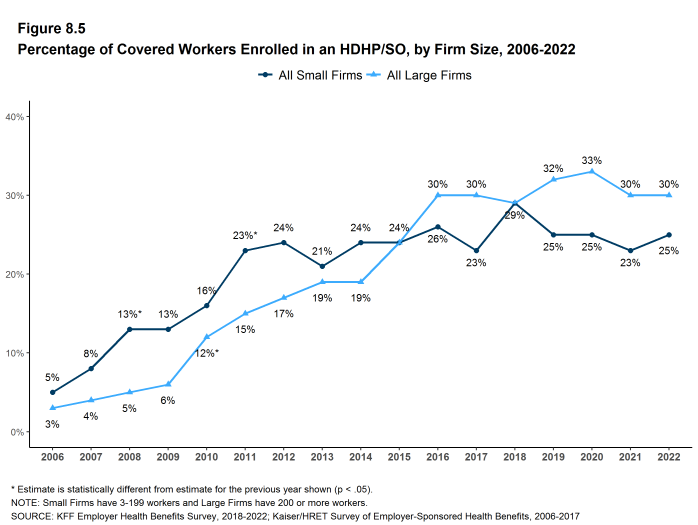 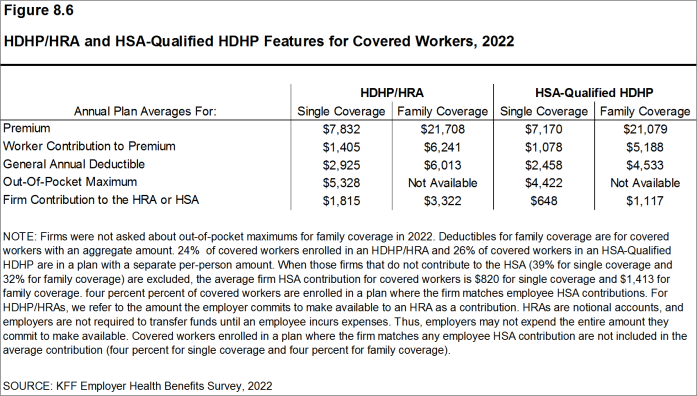 Figure 8.7: Average Annual Premiums and Contributions to Savings Accounts for Covered Workers in HDHP/HRAs or HSA-Qualified HDHPs, Compared to Non-HDHP/SOs, 2022 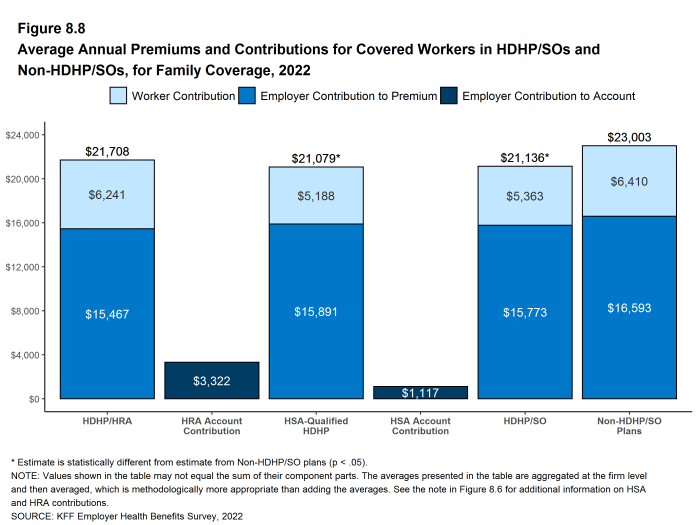 Figure 8.8: Average Annual Premiums and Contributions for Covered Workers in HDHP/SOs and Non-HDHP/SOs, for Family Coverage, 2022 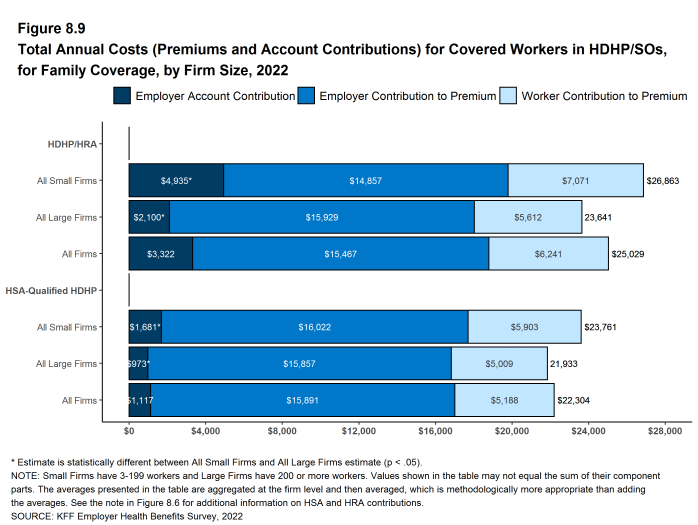 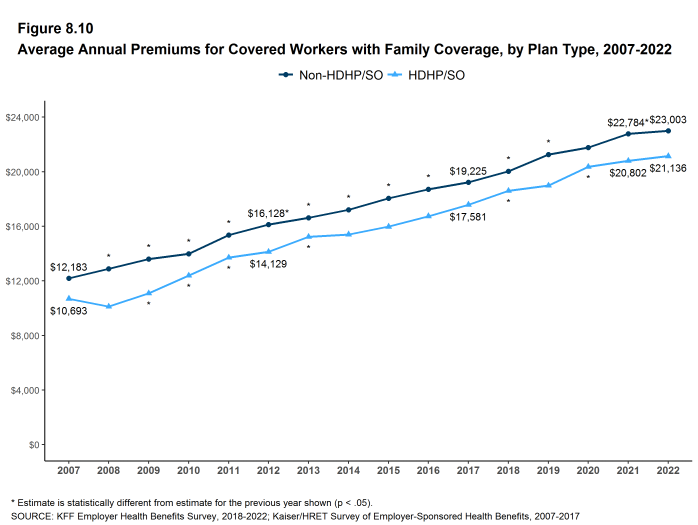 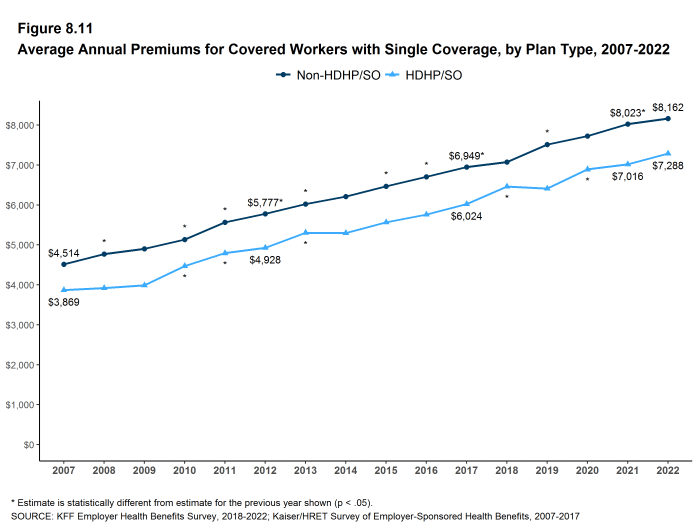 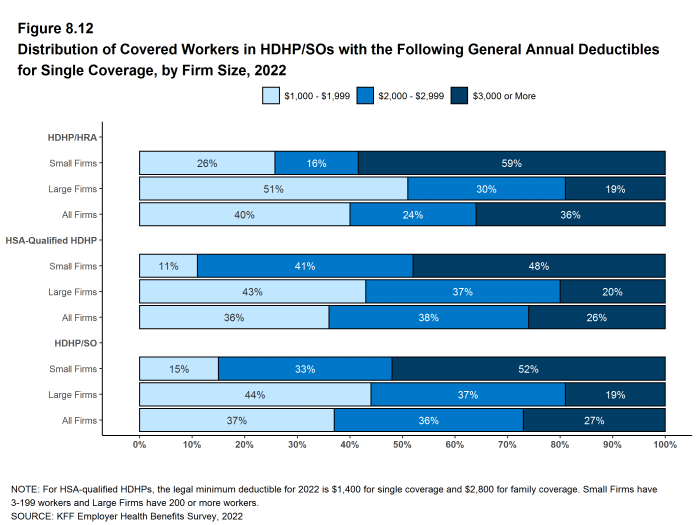 Figure 8.12: Distribution of Covered Workers in HDHP/SOs With the Following General Annual Deductibles for Single Coverage, by Firm Size, 2022

Figure 8.13: General Annual Deductible for Workers in HDHP/SOs After Any Employer Account Contributions for Single Coverage, by Firm Size, 2022 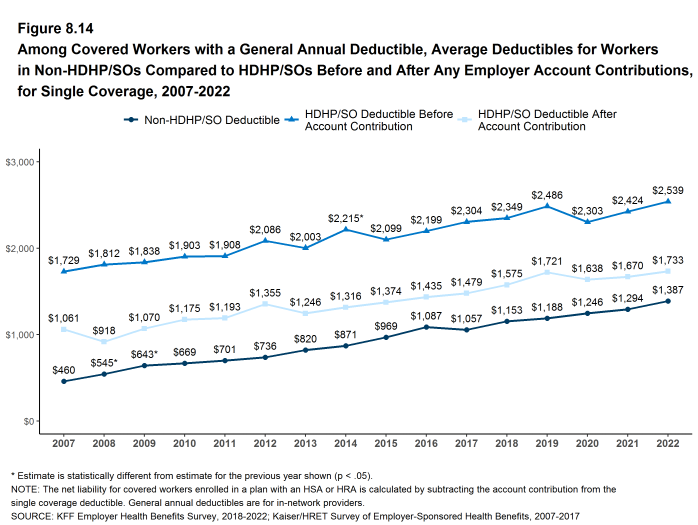 Figure 8.14: Among Covered Workers With a General Annual Deductible, Average Deductibles for Workers in Non-HDHP/SOs Compared to HDHP/SOs Before and After Any Employer Account Contributions, for Single Coverage, 2007-2022 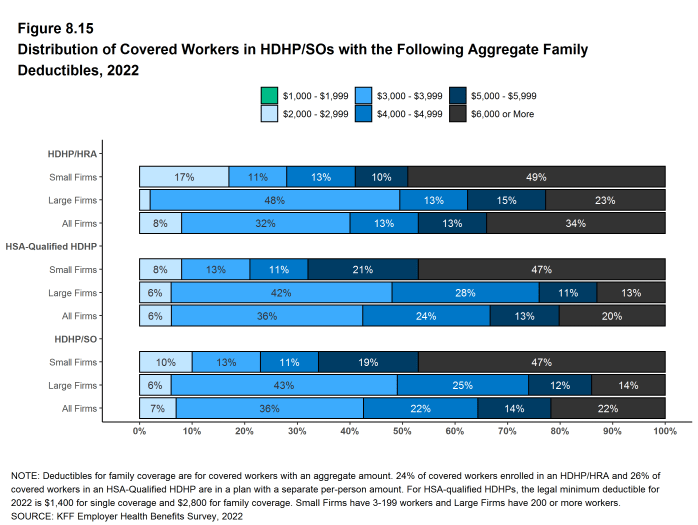 Figure 8.15: Distribution of Covered Workers in HDHP/SOs With the Following Aggregate Family Deductibles, 2022 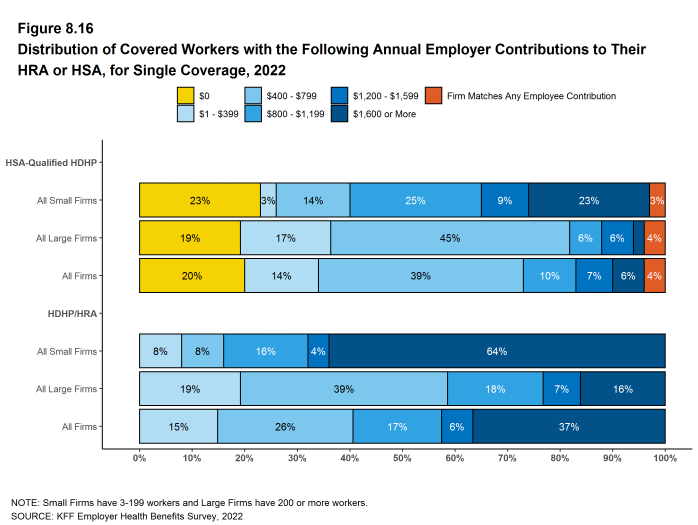 Figure 8.16: Distribution of Covered Workers With the Following Annual Employer Contributions to Their HRA or HSA, for Single Coverage, 2022 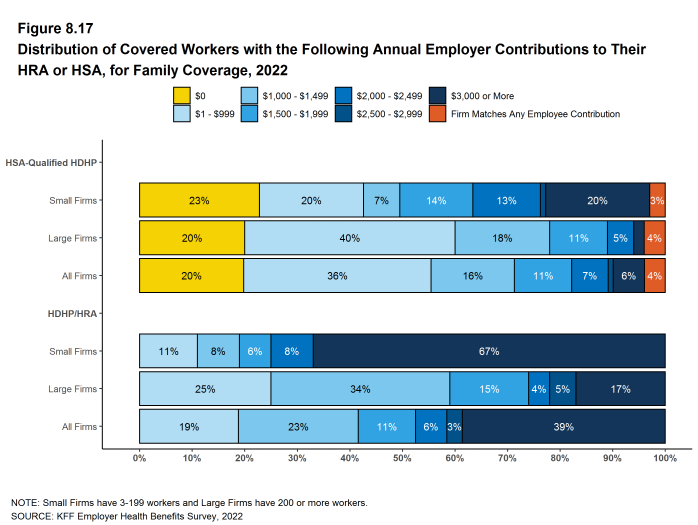 Figure 8.17: Distribution of Covered Workers With the Following Annual Employer Contributions to Their HRA or HSA, for Family Coverage, 2022 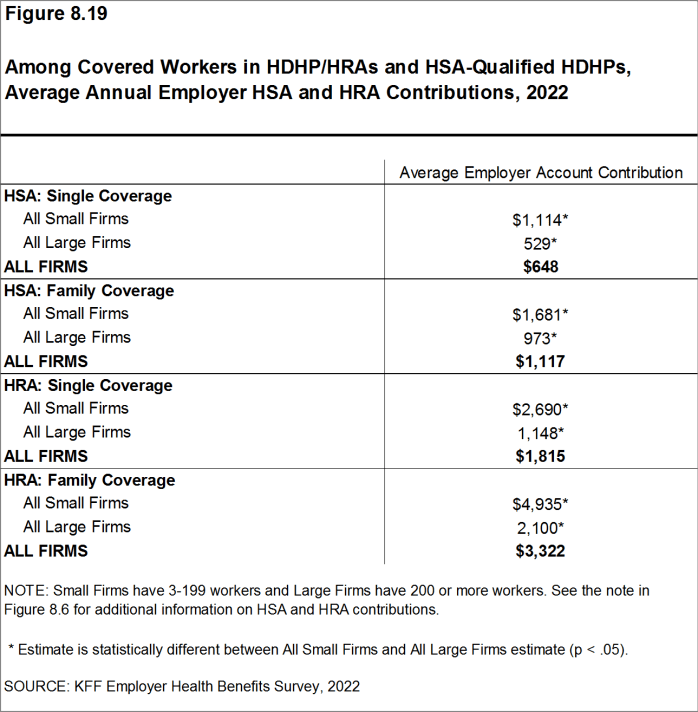 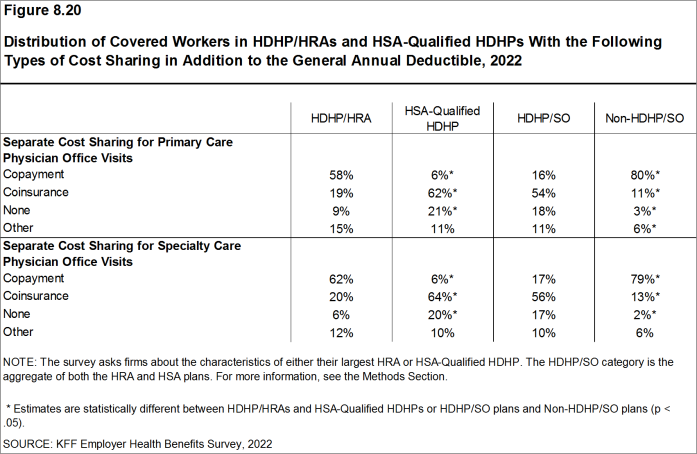 Figure 8.20: Distribution of Covered Workers in HDHP/HRAs and HSA-Qualified HDHPs With the Following Types of Cost Sharing in Addition to the General Annual Deductible, 2022

Health Reimbursement Arrangements (HRAs) are medical care reimbursement plans established by employers that can be used by employees to pay for health care. HRAs are funded solely by employers. Employers may commit to make a specified amount of money available in the HRA for premiums and medical expenses incurred by employees or their dependents. HRAs are accounting devices, and employers are not required to expend funds until an employee incurs expenses that would be covered by the HRA. Unspent funds in the HRA usually can be carried over to the next year (sometimes with a limit). Employees cannot take their HRA balances with them if they leave their job, although an employer can choose to make the remaining balance available to former employees to pay for health care. HRAs often are offered along with a high-deductible health plan (HDHP). In such cases, the employee pays for health care first from his or her HRA and then out-of-pocket until the health plan deductible is met. Sometimes certain preventive services or other services such as prescription drugs are paid for by the plan before the employee meets the deductible.

Health Savings Accounts (HSAs) are savings accounts created by individuals to pay for health care. An individual may establish an HSA if he or she is covered by a “qualified health plan” – a plan with a high deductible (at least $1,400 for single coverage and $2,800 for family coverage in 2022 or $1,400 and $2,800, respectively, in 2021) that also meets other requirements. Employers can encourage their employees to create HSAs by offering an HDHP that meets the federal requirements. Employers in some cases also may assist their employees by identifying HSA options, facilitating applications, or negotiating favorable fees from HSA vendors.
Both employers and employees can contribute to an HSA, up to the statutory cap of $3,650 for single coverage and $7,300 for family coverage in 2022. Employee contributions to the HSA are made on a pre-income tax basis, and some employers arrange for their employees to fund their HSAs through payroll deductions. Employers are not required to contribute to HSAs established by their employees but if they elect to do so, their contributions are not taxable to the employee. Interest and other earnings on amounts in an HSA are not taxable. Withdrawals from the HSA by the account owner to pay for qualified health care expenses are not taxed. The savings account is owned by the individual who creates the account, so employees retain their HSA balances if they leave their job. See https://www.federalregister.gov/d/2019-08017/p-850 For those enrolled in an HDHP/HSA, see https://www.irs.gov/pub/irs-pdf/p969.pdf