Health insurance coverage is a critical factor in making health care affordable and accessible to women. Among the 97.4 million women ages 19 to 64 residing in the U.S., most had some form of coverage in 2018. However, gaps in private sector and publicly-funded programs and lack of affordability left a little over one in ten women uninsured. The Affordable Care Act (ACA) expanded access to affordable coverage through a combination of Medicaid expansions, private insurance reforms, and premium tax credits. This factsheet reviews major sources of coverage for women residing in the U.S. in 2018, discusses the impact of the ACA on women’s coverage, and the coverage challenges that many women continue to face. 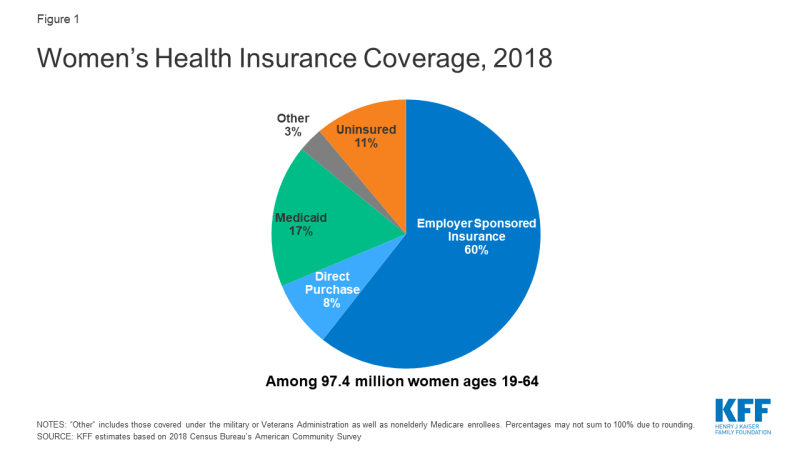 The state-federal program for low-income individuals, Medicaid, covered 17% of non-elderly adult women in 2018. Historically, to qualify for Medicaid, women had to have very low incomes and be in one of Medicaid’s eligibility categories: pregnant, mothers of children 18 and younger, a person with a disability, or over 65. Women who didn’t fall into these categories typically were not eligible regardless of how poor they were. The ACA allowed states to eliminate these categorical requirements and broaden Medicaid eligibility to most individuals with incomes less than 138% of the FPL regardless of their family or disability status, effective January 2014. As of January 2020, 36 states and DC have expanded their Medicaid programs under the ACA.

Women are less likely than men to be uninsured—in 2018, 14% of men 19-64 were uninsured compared to approximately 11% of women ages 19 to 64 (10.8 million women), a decline from 18% in 2008 (Figure 2). Starting in 2010, the ACA required non-grandfathered private group and non-group health that offered dependent coverage to give workers the option of keeping adult children up to the age of 26 enrolled as dependents, while Medicaid expansion offered coverage to many uninsured low-income women who did not previously qualify for Medicaid. As a result, women under the age of 26 and women with incomes below 200% FPL saw significant declines in uninsured rates between 2008 and 2018. Since 2016, the fall in the share of women who are uninsured has stalled. Uninsured women often have inadequate access to care, get a lower standard of care when they are in the health system, and have poorer health outcomes. Compared to women with insurance, uninsured women have lower use of important preventive services such as mammograms, Pap tests, and timely blood pressure checks. They are also less likely to report having a regular doctor. 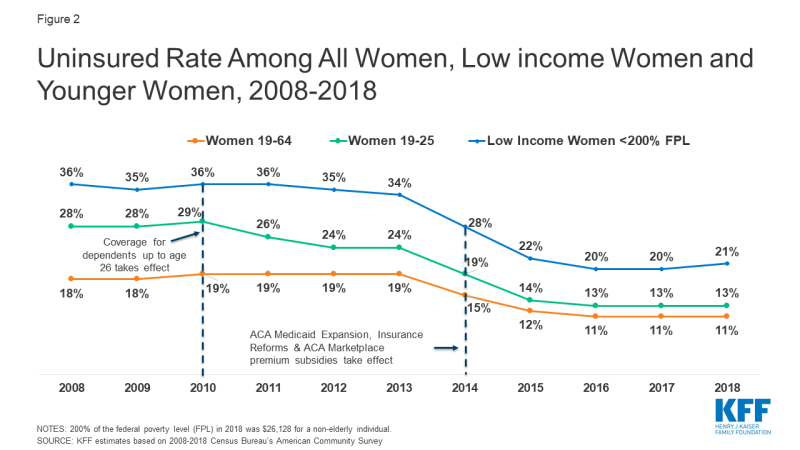 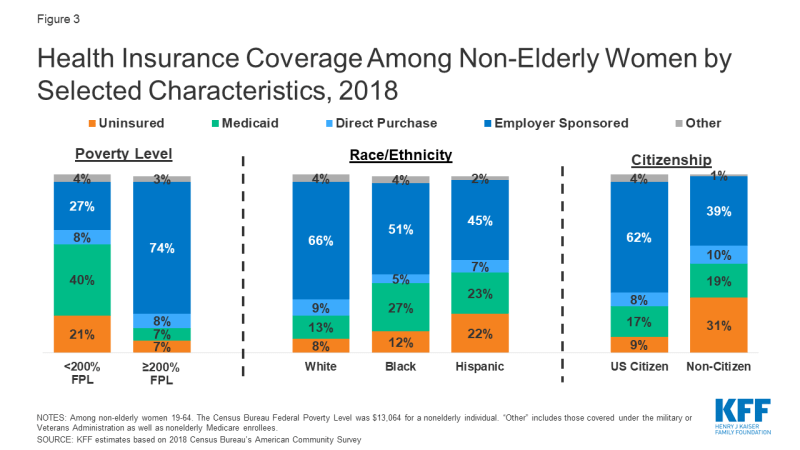 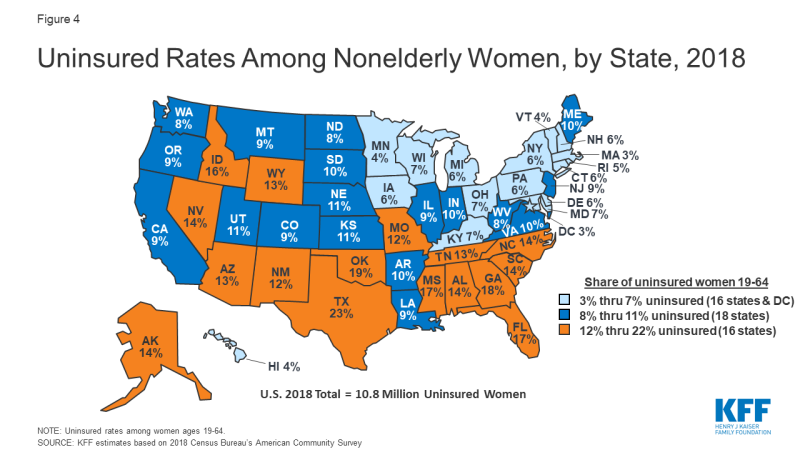 Many women who are uninsured are potentially eligible for coverage, but are not enrolled. Some, however, still lack any pathway to affordable coverage. 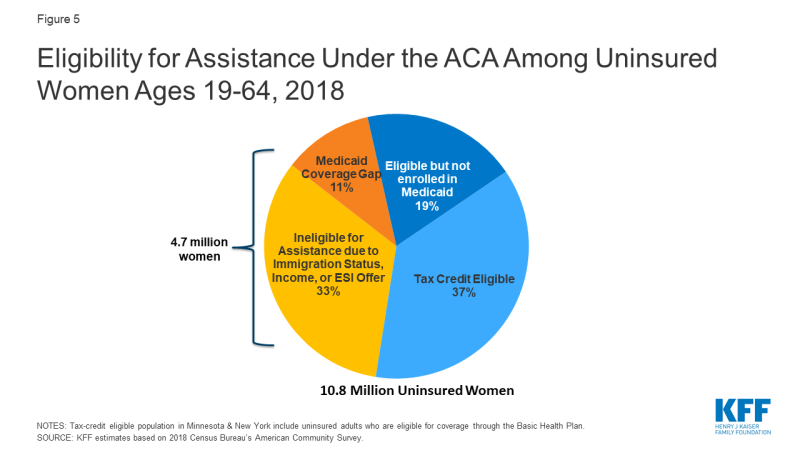 The ACA set national standards for the scope of benefits offered in private plans. In addition to the broad categories of essential health benefits (EHBs) offered by marketplace plans, all privately-purchased plans must cover maternity care which had been historically excluded from most those plans. In addition, most private plans must cover preventive services without co-payments or other cost sharing. This includes screenings for breast and cervical cancers, well woman visits (including prenatal visits), prescribed contraceptives, breastfeeding supplies and supports such as breast pumps, and several STI services. However, the Trump administration’s expansion of short-term plans that do not have to comply with any of these benefits standards could erode the scope of coverage some women receive. Additionally, in 2018, the Trump Administration issued final regulations expanding the type of employers eligible for an exemption from the ACA’s contraceptive coverage requirement to include private employers with a religious or moral objection to contraception. While these regulations are currently blocked by federal courts’ rulings, if these regulations go into effect women who work for exempt employers and female dependents will no longer be entitled to contraceptive coverage. Abortion services are explicitly prohibited from being included as EHBs. Twenty-six states have laws banning coverage of most abortions from the plans available through the state Marketplaces, and plans offered in states that don’t ban coverage must segregate payments for abortion coverage, charging no less than $1.00 for that coverage.

Affordability of coverage and care continues to be a significant concern for many women, both for those who are uninsured as well as those with coverage. The leading reason why uninsured non-elderly adults report that they haven’t obtained coverage is that it is too expensive. Under employer-sponsored insurance, the major source of coverage for women, 55% of all covered workers with a general annual deductible have deductibles of at least $1,000 for single coverage. Thirty-seven percent of women with employer sponsored coverage report that it is difficult to meet their deductibles.8

Health coverage matters for women. Those with health coverage are more likely to obtain needed preventive, primary, and specialty care services, and have better access to new advances in women’s health. Today, women can get coverage without worrying that they will be charged more for insurance than men, be assured that their insurance provides them with no-cost coverage for a wide range of recommended preventive services, and coverage for critical services for women such as maternity care . While there has been much progress in expanding coverage and reducing the number of uninsured women since the passage of the ACA, affordability continues to be a challenge for many women and 10.8 million women still lack coverage. Over half of uninsured women qualify for either Medicaid or subsidies to secure coverage through the Marketplace but many still lack a pathway to affordable coverage.

The significant drop in the share of uninsured women has stalled in recent years. Recent state and federal efforts to roll back ACA-related policies could further weaken coverage and may result in higher out-of-pocket costs for women who need these services. A lawsuit working its way through the courts could result in the entire ACA being invalidated. Meanwhile, a variety of proposals to expand coverage options and lower costs are currently being debated in Congress, on the campaign trail, and by the states. They range from proposals that build on the ACA—expanding Medicaid in states that have not yet done so, enhancing and extending marketplace subsidies to more people, and offering a public plan option alongside private insurance in the marketplaces—to proposals to adopt a single Medicare-for-all program that would replace existing forms of coverage. The outcome of this ongoing debate has substantial implications for women and families who face the health and financial consequences of not having health insurance or who must shoulder significant out-of-pocket cost for their coverage.