The Affordable Care Act (ACA) guarantees that people cannot be denied coverage or charged higher premiums in the individual insurance market due to their health status. While most adults under age 65 have health insurance coverage through an employer, many turn to the non-group market at some point in their lives, such as if they lose a job, become self-employed, get divorced, age off of a parent’s policy, retire early, or lose eligibility for public coverage. Prior to 2014, when most of the Affordable Care Act’s (ACA) consumer protections took effect, people seeking non-group coverage in all but five states1 were routinely denied or charged more based on their health status and history, pregnancy status, prescription medications, and lab results. In 2013, 18% of individual market applicants were denied coverage; this figure does not account for the many people with pre-existing health conditions who did not even try to apply.

In November, the Supreme Court will hear oral arguments on California v. Texas, a lawsuit brought by Republican state officials and supported by President Trump, that seeks to invalidate the ACA entirely. If the ACA is overturned, federal protections for people with pre-existing health conditions would end and access to high quality, affordable individual market insurance for them could be drastically reduced.

We analyzed data from the 2018 National Health Interview Survey (NHIS) and 2018 Behavioral Risk Factor Surveillance System (BRFSS) to calculate prevalence rates of declinable health conditions.2 This data note looks at the share of adults ages 18-64 with declinable pre-existing conditions, with a particular focus on women.

53.8 million (27%) adults under 65 have at least one pre-existing condition that would have rendered them ineligible for individual insurance prior to the ACA, with higher rates among women than men. The prevalence of declinable conditions increases with age, ranging from 18% of those ages 18-34 to 44% of those ages 55-64 (Figure 1). 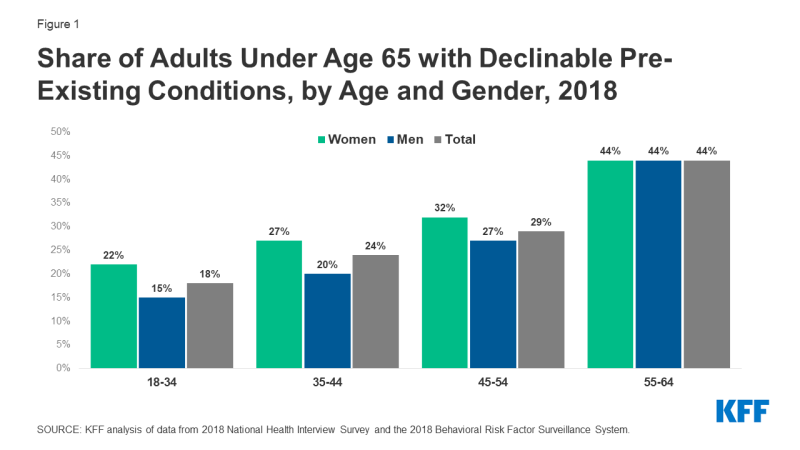 Figure 1: Share of Adults Under Age 65 with Declinable Pre-Existing Conditions, by Age and Gender, 2018

We estimate that 30.1 million (30%) women have a pre-existing condition that would have left them uninsurable in the individual market pre-ACA, compared to 23.7 million (24%) men (Table 1). These estimates are conservative because the NHIS and BRFSS do not contain data for all conditions that were often declinable (e.g., HIV/AIDS), nor for use of prescription medications that could have triggered a coverage denial. Some conditions disproportionately affect women, such as pregnancy and certain types of cancer.

The share of women under 65 with a declinable health condition decreases with income, ranging from 40% of those with household incomes below 100% of the federal poverty level (FPL) to 25% for those at or above 400% of FPL. Twenty-seven percent of women under 65 residing in a metropolitan county have a pre-existing condition compared to 34% in non-metropolitan counties.3 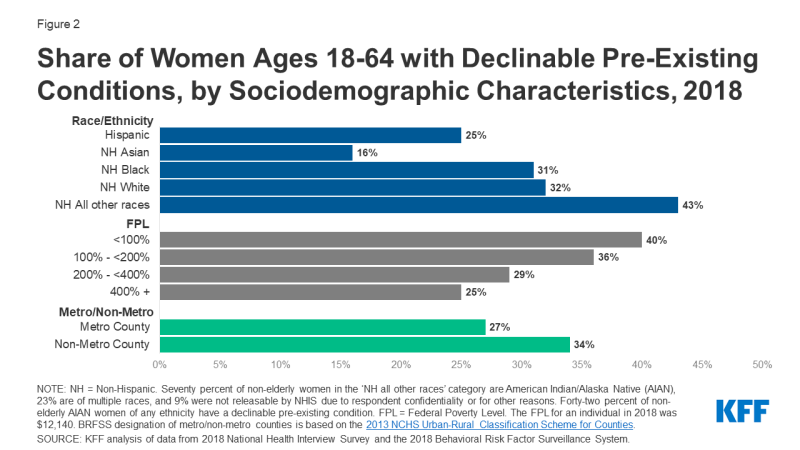 Rates of declinable pre-existing conditions vary from state to state (Figure 3). On the low end, less than one-quarter (23%) of women under age 65 in Massachusetts have conditions that would likely be declinable under pre-ACA underwriting practices in the individual market. For men under age 65 (19%), the rate is lowest in Colorado. On the high ends, more than one-third of women (39%) and men (34%) in West Virginia have a declinable health condition. Overall, rates of pre-existing conditions are higher in the South – such as Arkansas (34%), Kentucky (34%), Mississippi (34%), and West Virginia (37%), where at least one-third of adults under 65 have declinable conditions.

We estimate that 27% (53.8 million) of adults under age 65, including 30% (30.1 million) of women, have at least one pre-existing health condition that would have left them uninsurable in the medically-underwritten, pre-ACA individual market. The ACA’s prohibition on denying health insurance based on health status, or charging more for coverage, has been of particular importance to women, who have higher rates of pre-existing conditions than men. If the ACA is overturned, these protections would disappear, leaving many women vulnerable to difficulties obtaining insurance that addresses all of their health needs should they need to secure coverage through the individual insurance market either as their regular source of coverage or temporarily during life transitions.