As part of the federal response to the COVID-19 pandemic, states meeting certain “maintenance of eligibility” (MOE) conditions can access enhanced federal Medicaid funding. The Families First Coronavirus Response Act,1 amended by the Coronavirus Aid, Relief, and Economic Security (CARES) Act,2 authorizes a 6.2 percentage point increase in the federal Medicaid match rate (“FMAP”)3 (retroactive to January 1, 2020) through the end of the quarter in which the public health emergency ends. To qualify for the enhanced funds, states must ensure continued coverage for current enrollees and are prohibited from increasing premiums or making eligibility standards, methodologies, or procedures more restrictive than those in effect on January 1, 2020, among other requirements.4

The MOE requirements5 contribute to enrollment increases6 by eliminating the usual enrollment churn that occurs when some individuals lose eligibility and are dis-enrolled from Medicaid each month. In the past, some eligibility churn occurred when otherwise eligible individuals lost coverage because they encountered barriers preventing them from timely documenting continued eligibility during the eligibility renewal process or when states conducted periodic data matches between renewals.7 Prior to the pandemic, these types of barriers were potentially depressing overall Medicaid enrollment levels.8

In addition to the MOE requirements, some states are utilizing Medicaid emergency authorities to take other actions to help people obtain and maintain coverage. These include actions to expand eligibility and make it easier to apply such as allowing for self-attestation of eligibility criteria; eliminating premiums; expanding the use of presumptive eligibility; and otherwise simplifying application processes.9 The beginning and ending dates of these policies vary by authority10 and many will expire with the end of the public health emergency (PHE) declaration (currently set for January 21, 2020).11

Seven states reported non-emergency plans to expand eligibility in FY 2021. As of October 2020, 39 states (including DC) have adopted the ACA Medicaid expansion (Figure 1).12 Of these, 37 states to date have implemented expansion coverage to 138% FPL ($17,609 per year for an individual in 2020),13) including Idaho and Utah, which both implemented the expansion on January 1, 2020 (FY 2020), and Nebraska, which implemented on October 1, 2020 (FY 2021). Two additional states, Oklahoma and Missouri, will implement the expansion in FY 2022 as a result of successful Medicaid expansion ballot initiatives. 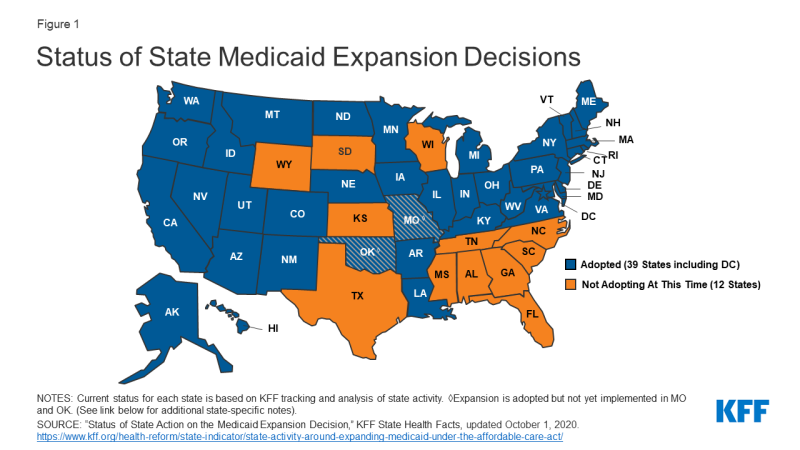 Only two states reported a planned eligibility restriction in FY 2021 after the expiration of the PHE. Missouri reported that scheduled premium increases would go forward after the PHE ended and Montana reported plans to implement a community engagement/work requirement and premium changes for expansion adults pending CMS approval of the state’s Section 1115 waiver renewal.

Although not counted as an eligibility expansion or a restriction for purposes of this survey, Texas reported that it would implement changes (including applying modified adjusted gross income (MAGI) financial eligibility methodologies to individuals eligible for family planning-only services) to its Healthy Texas Women (HTW) Section 1115 waiver program as required under the waiver’s January 2020 approval from CMS.18 The approved HTW waiver extended eligibility for family planning services to women age 18-44 up to 200% FPL not otherwise eligible for Medicaid and allowed Texas to waive non-emergency medical transportation (NEMT); retroactive eligibility; early and periodic screening, diagnostic, and treatment (EPSDT) coverage; and freedom of choice of provider for family planning services.

Two states reported non-emergency plans to simplify enrollment processes in FY 2021. Montana reported plans to implement an auto-renewal process for non-MAGI eligibility groups and Virginia reported plans to expand ex parte auto-renewals when individuals experience changes such as reaching the end of their postpartum coverage period or attaining an age requiring evaluation in other covered groups. While Virginia did not characterize this change as the extension of an emergency authority, the state did note that the proposed changes are intended to reduce caseworker caseloads when the PHE period ends.

Eligibility Changes in Response to COVID-19

Only five states19 reported plans to continue COVID-19 emergency changes related to eligibility and enrollment policies beyond the PHE period. One state (Vermont) noted that a variety of certain emergency flexibilities would likely extend beyond the PHE period due to the time required to re-implement prior policies. A few states reported specific plans for the continuation of policies to simplify/expedite enrollment processes:

Another 12 states reported that the continuation of emergency eligibility and enrollment policies remained undetermined. Indiana and Louisiana reported that more time could be needed to re-implement their prior policies; Missouri indicated that it may continue to allow self-attestation of most eligibility factors for ABD and MAGI populations; and a few states (West Virginia, Kansas, and Missouri) reported potential plans to further extend renewal timelines.20

At the time of survey completion, thirteen states had approved State Plan Amendments (SPAs) in place for the new Uninsured Coronavirus Testing group at the time of survey submission. This new optional eligibility pathway provides 100% federal matching funds for states to cover coronavirus testing and testing-related services for uninsured individuals through the end of the PHE. 21 In addition to this option, providers can alternatively obtain reimbursement for coronavirus testing and treatment provided to uninsured individuals from additional federal funds through the Health Resources and Services Administration.22 One state (California) reported covering a significant number of persons under its Uninsured Coronavirus Testing group as of June 30, 2020 (6,390). All other states reported more modest enrollments: Colorado, Louisiana, and Minnesota reported covering between 50 and 450 individuals and Maine reported covering approximately 850 individuals. Other states that had adopted the option (including Alabama, Iowa, Montana, Nevada, New Hampshire, South Carolina, and West Virginia) reported between zero and 50 persons covered and Washington has an approved SPA for this group but did not report the number of individuals covered. Since the time of survey submission, two additional responding states (Connecticut and North Carolina) have received SPA approvals for this group.23