Medicaid is the nation’s primary payer for long-term services and supports (LTSS).1 State Medicaid programs must cover LTSS in nursing homes, while most home and community-based services (HCBS) are optional, which results in considerable differences among states in HCBS eligibility, scope of benefits, and delivery systems.2 The COVID-19 pandemic has greater implications for people who utilize LTSS, who may be at increased risk for adverse health outcomes if infected with coronavirus due to their older age, underlying health conditions, and/or residence in congregate settings. Members of the long-term care (LTC) workforce—which is predominantly female and low wage, and disproportionately Black—are also at elevated risk of coronavirus infection.3 LTC facilities have implemented many protocols to mitigate the spread of the virus, such as visitor restrictions and universal testing of residents and staff. These new measures have played an important role in reducing the number of new LTC cases and deaths in later months of the pandemic. 4 However, given the close relationship between community transmission and LTC cases and deaths, there is still enormous state-level variation in patterns of new cases and deaths in LTC facilities. Notably, LTC cases and deaths continue to rise faster in “hotspot” states than “non-hotspot” states.5 As of October 8, 2020, LTC facilities across the country had reported a total of over 500,000 cases of COVID-19 as well as nearly 85,000 deaths related to the virus.6

As the pandemic continues, states have taken a number of Medicaid policy actions to address the impact on seniors and people with disabilities who rely on LTSS to meet daily self-care and independent living needs. These actions include expanding eligibility and streamlining enrollment, easing premium and/or cost-sharing requirements, enhancing benefits, increasing provider payment, modifying provider qualifications, and altering reporting requirements. Many of these policy changes have been adopted through temporary authorities that, according to CMS guidance,7 will expire when the COVID-19 public health emergency (PHE) declaration ends or are otherwise time-limited. Prior to that time, policymakers will need to assess whether any changes can or should be retained and transitioned to other authorities.8

To better understand the impact of COVID-19 on the LTSS direct care workforce, we asked states to indicate whether they had a variety of concerns about the pandemic’s impact on HCBS and institutional direct care workers. We also asked states about whether COVID-19 has impacted institutional/HCBS rebalancing efforts and whether it has impacted access to non-home and residential HCBS settings. Finally, we asked states to identify the top three LTSS policy changes adopted in response to COVID-19 that they plan to retain after the PHE period.

The majority of responding states reported concerns about the pandemic’s impact on the LTSS direct care workforce, with similar issues across HCBS and institutional settings (Figure 2). Specifically, states reported the following concerns:

Some states noted some improvements since the beginning of the pandemic in workforce supply, access to PPE and testing, and ability to control infection rates, while a few states identified specific LTSS populations or geographic areas that presented particular issues or concerns. For example, a few states reported issues with workforce, testing, and infection rates specifically for the population with intellectual and developmental disabilities (I/DD). A small number of states noted that workforce issues, distribution of PPE, and testing (due to lack of transportation to testing sites) were of greater concern for rural areas. 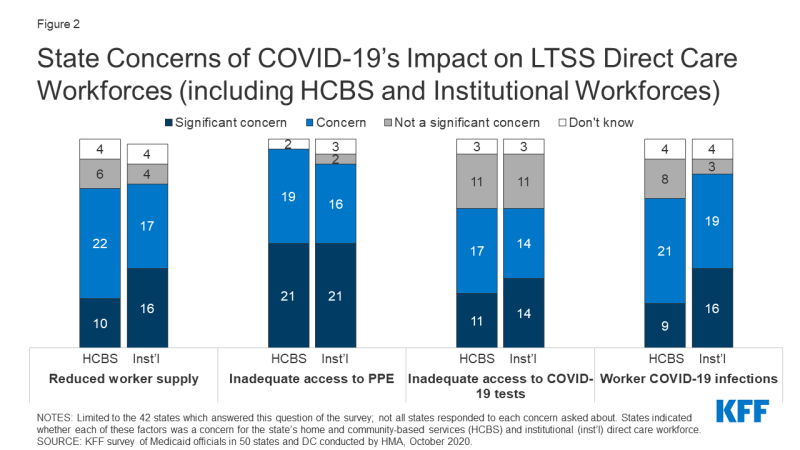 State responses regarding COVID-19 implications on state institutional/HCBS rebalancing efforts were mixed. Most frequently, states did not expect the pandemic to have an impact on rebalancing efforts to support more people in community-based over institutional settings. Several states, however, indicated that the pandemic would halt or delay HCBS expansion and others reported that fewer nursing facility transitions to the community would occur. Fewer states indicated that the pandemic would likely drive further rebalancing. Several states reported that the potential impact was unknown and/or was under review. Finally, a few states specifically indicated that negative fiscal and budget impacts resulting from the pandemic may delay rebalancing. When asked about access to existing HCBS services, nearly all responding states reported reduced access to non-home HCBS settings such as adult day health and day habilitation as a result of the COVID-19 pandemic, while fewer states reported reduced access to residential HCBS settings. Although residential settings were less likely to be closed or eliminated in response to the pandemic, these settings were still impacted by the pandemic including by its effects on the direct care workforce (as described above).