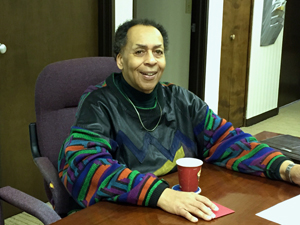 Rob lives alone, but doesn’t spend much time by himself. He helps care for his brother and his nephew, both of whom have disabilities and live nearby. He is active with his church and with a civic association that polices the neighborhood, and he advocates for many friends. Rob has degrees in business administration and music. Before he retired, he worked as an education program coordinator and as a professional musician.

Rob is grateful to be able to be so active because he has multiple health problems. He has been diagnosed with diabetes, hypertension, arthritis, and spinal stenosis. He suffers from migraines and back pain. He has had numerous surgeries including gastric bypass, knee replacements, hernia repair, and gallbladder, appendix, tumor removal. Rob’s main health care need now is prescription drugs. He takes 14 pills a day and uses a special cream for his knees. Sometimes he uses a walker, and he has trouble getting up steps but manages for now. Rob says that his mental health is sound because he stays active, travels to see family, and has a strong relationship with God.

When Rob received the first letter about the demonstration, he understood that he had to choose one of two health plans in his area for his Medicaid services. He chose his health plan because he had heard about payment problems in the past with the other plan from home health aides. Rob understood that he could voluntarily enroll in the same health plan to also receive Medicare services or remain in traditional Medicare. He contacted the health plan to ask for information. His main concern was what would happen with his coverage when he travels out-of-state. He also wanted to know whether the health plan would pay for the cream he uses for his knees because it comes from a specialty pharmacy in another state. His Medicare Part D plan now covers it but that took effort to arrange. The health plan customer service representative could not answer his questions so he decided to keep his traditional Medicare coverage. When the letter regarding enrollment for the second phase of Ohio’s demonstration arrived, Rob was surprised to see that he had been assigned to the health plan for his Medicare coverage because he thought that he had already chosen to retain his traditional Medicare. He called the state “to opt out again” so that he retains his traditional fee-for-service Medicare coverage and is enrolled in a health plan for his Medicaid coverage.

Rob still has not received an assessment by his health plan. He said, “I was completely on my own” because his care manager did not contact him until six months after he enrolled in the demonstration. He and his care manager now communicate by phone, and he is pleased to “have a direct line with [the health plan].” Rob has contacted the health plan customer service representatives, the demonstration enrollment broker, the ombuds office, and the state insurance commission. He reports that the ombuds office was helpful, but he would not have known about those services if he had not had help from a local beneficiary advocacy group. Rob also notes that many enrollees do not have the awareness, perseverance, or time that he does to devote to getting answer to questions.

Rob has particular concerns about the provider network available through his health plan. He says the list of doctors is not up-to-date. Consequently, people go to their appointments and are told that doctors can no longer see them. Rob is under the impression that many doctors’ offices do not like the new program because they have to have new contracts, have to bill in a different way, and are not getting paid on time. He notes that these problems affect patients as well. However, Rob does think that the demonstration has potential.