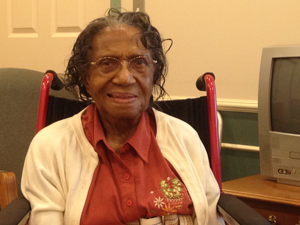 Fifteen years ago, Mary Francis moved from Oklahoma, where she was retired after working as a cook in a restaurant, to live with her daughter, Mary, in Virginia. She had had a stroke, which left her with little muscle control in her left leg. She uses a walker and is prone to falls and bone fractures. She still has pins in one knee because of a fall. Mary Francis has had a few surgeries over the years. She has hypertension and advanced glaucoma and is followed for a heart murmur.

Mary Francis has been attending the same adult day health center for 15 years. She participates in all of the activities that are offered and says she enjoys every one of them. She is proud to have attended the center longer than anyone else. She also receives 44 hours per week of home health services, including help with dressing, preparing meals, and grocery shopping. Her granddaughter is available to provide respite care. In describing her situation, Mary Francis says, “I’m loved.”

She and her daughter first heard about the demonstration at a meeting sponsored by the adult day health center. Representatives from the state as well as the participating health plans made presentations. Mary and her mother were drawn to the demonstration because of the extra benefits, such as podiatry, that were available and the promise of care coordination. They said it was also reassuring to know that they could leave the program if they did not like it. Mary chose a health plan after she determined that all of her mother’s doctors were in the plan’s network. In making the choice, she contacted a counselor from Virginia’s state health insurance assistance program for Medicare beneficiaries. The counselor had made a presentation at the introductory session and provided her contact information.

The Care Coordinator “was really good… When she was first assigned, she went with me to meet Mama’s primary care physician just so she could let them know who she was and what Services she was going to be providing.”

Shortly after she enrolled, a care coordinator visited Mary Francis at home to conduct an assessment, including a review of her prescription medications. The coordinator also called to check on Mary Francis at least once a month. Mary was particularly pleased that the coordinator was available to help arrange care for her mother after she fell, had to go to the emergency room, and needed rehabilitation services. In the past, Mary said, she would have had to make all of those arrangements. She appreciated the help.