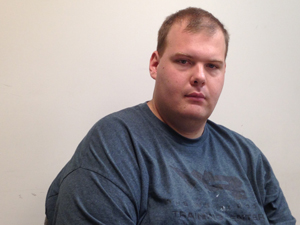 Eric is a community college student who hopes to continue studying social sciences at a local university. When he is not studying, he enjoys playing laser tag and video games with friends, going to the gym, and eating Indian food at a local restaurant. He also takes care of his fish and walks his friend’s dogs. He lives by himself in an apartment.

Eric last worked in 2003. He was doing kitchen work but stopped working after he was admitted to an inpatient psychiatric hospital and diagnosed with schizoaffective disorder. He was in and out of the hospital for four years, but has not been hospitalized since 2007. He is grateful to have more stability now, to be responding well to his medication, and to have coverage for routine medical care. Eric has a regular primary care physician. He is being treated for high blood pressure.

“I already have a case manager, so it might be redundant.”

Eric was surprised when he received the letter that introduced the demonstration and indicated that he would be enrolled in a particular health plan unless he chose another plan. He called the phone number on the letter and asked some general questions, then decided to go with the health plan to which he was assigned. Soon afterward, he received an insurance card from the plan and a call from someone at the plan who asked a number of questions. Eric was not sure why she called, and at first, he thought she was a telemarketer. She has not called since, and Eric does not have her name or contact information.

To his knowledge, Eric does not have a health plan case manager, and he has not heard any discussion about a behavioral health home, one of the features planned for Virginia’s demonstration. He says these features might be a good idea for others, but Eric says that he already has an established case manager at the behavioral health organization where he goes for regular treatment.

Eric does have some questions related to his new coverage. One question is whether there is a particular hospital where he would have to go to in an emergency, for example, if he had a psychotic break. He is also unsure why a different doctor rather than his own doctor is listed as the primary care doctor on his health plan card, although he has not had problems having visits with his regular doctor covered. Basically, however, Eric is satisfied with the demonstration. He has used the extra dental benefits to have his teeth cleaned. He does not have to pay for his prescriptions or monthly lab work. His only concern at this point is whether he will be able to maintain his Social Security Disability benefits. He has just appealed a decision to discontinue these benefits, and the outcome could affect his Medicare eligibility as well.