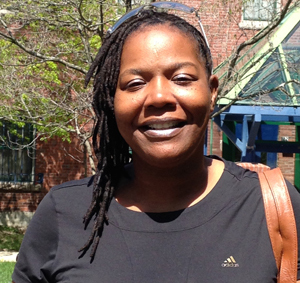 Sylvia enjoys reading and writing and is working on a memoir. She has two adult children and lives alone. Sometimes, she feels isolated. Sylvia has worked since she was 14, most recently in the customer service field, but following back and shoulder surgery due to injuries from a car accident is not feeling well enough to go back to work. She has received some physical therapy and has a prescription for more as well as a prescription for acupuncture for pain management but has not made appointments for these services yet. She is taking anti-inflammatory medicine. Sylvia also has peptic ulcers and sees a dermatologist for skin conditions.

Sylvia has had anxiety and depression her whole life as well as prolonged grief associated with trauma in her past. She had received therapeutic counseling, but the clinic she attended shut down, and she was told that there was a two to three month wait to see a new therapist. Rather than stay on a waiting list and go through the orientation and intake process again, she relies on her primary care doctor who has prescribed medication.

“I feel prone to being lost in the system… i really want someone to work with me. I need someone to communicate and listen to me and explain what’s going on with me to doctors.”

Sylvia knows that she should make an appointment to see a gynecologist. She is trying to get to the acupuncturist and physical therapist and would like to attend a weight management clinic but finds it “difficult to get started.” Also, she says that sometimes appointments are scheduled too far in advance, and she forgets about them. She has a car but sometimes does not feel up to driving or does not have money for gas. She does not know if she would qualify for assistance with transportation or how to arrange those services but thinks it would help her get to some appointments.Sylvia has received Social Security Disability benefits since 2001. She has had Medicare coverage for 12 years and has qualified for Medicaid off and on during that time as her income has fluctuated. The hospital helped her apply for Medicaid when she had surgery. She heard about the demonstration then and decided to enroll because she was looking for someone to help her with care coordination. However, no one from the health plan has called or visited her since she enrolled. Sylvia assumes that they are probably overbooked or backlogged. She did get a packet of information but says most of it pertained to choosing doctors. She already has a regular doctor, who was not originally part of the health plan’s network, but Sylvia received care without interruption, and her doctor is now a network provider. Sylvia also read about care teams in a brochure that she received, but she does not think she has one yet and is not sure if it is up to her or her doctor or someone else to set up the team.