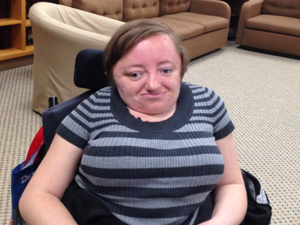 Desiree has a Master of Science degree in Education and Assistive Technology and has worked for Easter Seals for the past year and a half as a youth services manager. She lives with a roommate in a physically accessible apartment in downtown Boston and uses public transportation to commute to work, go to the gym, and go out with friends. She has a power wheelchair with a seat elevator, which she needs because of her short stature and brittle bones, characteristics of osteogenesis imperfecta type III, a genetic condition. Desiree does not have other medical problems. She receives routine care from her primary care doctor and sees an orthopedist and a neurosurgeon when necessary. She also receives22 hours of personal care services each week. Desiree also has had a service dog for the past two and a half years. The dog performs tasks such as opening doors, switching on lights, and picking things up.

“One thing I like about [the demonstration] is that once it’s straightened out, there’s not a lot of hoops to jump through.”

Desiree first heard about the demonstration from colleagues at the Center for Independent Living. She was eager to enroll when the program became available, and so, when she received a letter introducing the program, she signed up to receive services from the only plan available in her area. Her early program experiences were discouraging, however; initially, she found the program “very difficult to navigate.” For example, no one from the health plan contacted her, and a visit from a care coordinator did not occur until seven or eight months after she called to request one. It took about a year for the LTSS coordinator to respond to her request to meet.

Once she connected with the care coordinators, Desiree was pleased. She received authorization for additional personal care hours. She now has an assistive technology device that helps extend her reach, and the LTSS coordinator is working with her building manager to make the kitchen in her apartment fully accessible.

Not having a specific contact at the health plan early on was particularly problematic when Desiree needed authorization to service her wheelchair. It took two weeks before the calls she made to health plan were returned. Each time Desiree spoke with plan representatives, she was told that they would give the care coordinator her message, but she was unable to contact the care coordinator directly, and her wheelchair was “pretty much out of commission” by the time she got a response. Her experience was much different once she had an established care coordinator who she could call directly. When she injured her shoulder, for example, she received immediate authorization to see her orthopedist although he is not in the plan’s network, because he already knows her medical history and seeing him was a good alternative to going to the emergency room.

Desiree recently learned that she would have a new care coordinator though she does not know the reason for the change. She would prefer not to have to start again with someone new. Also, she would rather not have so many meetings with care coordinators, particularly in-person meetings. She suggested that phone meetings might be a good alternative, particularly for independent working enrollees who have proven ability to manage their own care.

At this point, Desiree is pleased to be enrolled in the demonstration as a dual eligible. Looking ahead, she is concerned, however, that her length of work will affect her Medicare eligibility and, in turn, her eligibility for the demonstration because if she loses Medicare coverage, she will no longer be a dual eligible. Now that she is working, she is in a transition period during which she retains Medicare but no longer receives Social Security Disability benefits. After five years of work, she can pay to receive Medicaid benefits through the buy-in program for working adults with disabilities, but once she loses Medicare coverage, she will no longer be dually eligible and so does not think she will be able to participate in the demonstration. In speaking about the program, she notes, “It really wasn’t made for working professionals. I don’t think it’s understood that there [are] working professionals who need it.”