What is the Medicare Part D prescription drug benefit?

In 2015, 1,001 stand-alone prescription drug plans (PDPs) are available nationwide, fewer than in any year since the program began in 2006. Medicare beneficiaries in each region have a choice of 30 stand-alone PDPs, on average, in 2015.

Medicare Part D plans are required to offer either the standard benefit that is defined in law or an alternative benefit design that is equal in value (“actuarially equivalent”); plans can also offer enhanced benefits.

The standard benefit in 2015 has a $320 deductible and 25 percent coinsurance up to an initial coverage limit of $2,960 in total drug costs, followed by a coverage gap (Figure 8). During the gap, enrollees are responsible for a larger share of their total drug costs than in the initial coverage period. Enrollees in plans with no additional gap coverage in 2015 pay 45 percent of the total cost of brands and 65 percent of the total cost of generics in the gap until they reach the catastrophic coverage limit. Medicare will phase in additional subsidies for brands and generic drugs, ultimately reducing the beneficiary coinsurance rate in the gap to 25 percent by 2020. 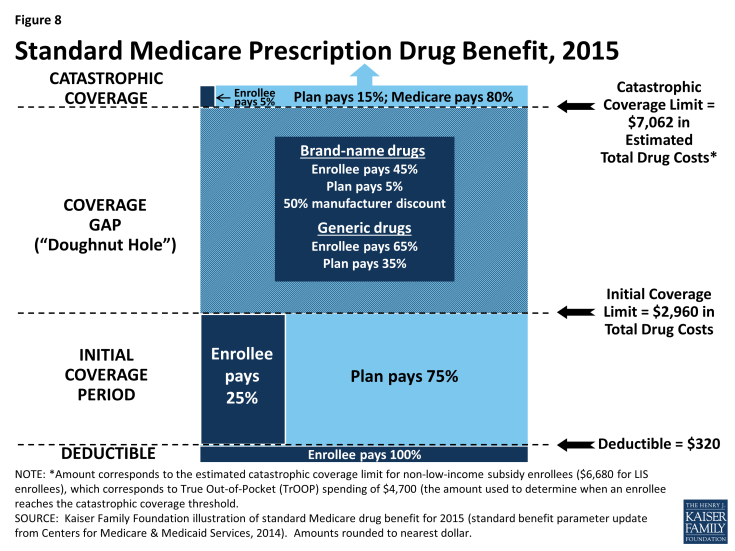 After total out-of-pocket spending reaches $4,700 in 2015 (excluding premiums)—an amount equivalent to $7,062 in estimated total drug costs—enrollees pay 5 percent of the drug cost or a copayment ($2.65/generic drugs or $6.60/brand-name drugs for each prescription) for the rest of the year. The standard benefit amounts are set to change annually by the rate of change in per capita Part D spending.

In 2015, no PDPs offer the standard benefit. Most charge copayments (flat dollar amounts) instead of 25 percent coinsurance; 58 percent of plans charge a deductible (44 percent of plans charge the full $320 deductible amount, and 14 percent charge a partial deductible).1 The majority (74%) of PDPs offer no gap coverage in 2015 beyond what the ACA requires plans to offer. With all Part D enrollees now getting coverage for a share of their drug costs in the gap, the value of additional gap coverage offered by plans will become lower each year until 2020, when the gap is fully closed.

Part D plans are required to maintain a medical loss ratio (MLR) of at least 85 percent; that is, 85 percent of revenue must be used on patient care, rather than on administrative expenses or profit. Plans vary widely, however, in terms of formularies (the list of covered drugs), the placement of drugs on formulary tiers, cost-sharing requirements, and utilization management tools (such as prior authorization requirements).

Monthly Part D premiums and cost-sharing amounts vary across plans and regions, and have increased significantly on average since 2006.

In 2015, the average monthly Part D premium for PDP plans is $38.83 (weighted by 2014 enrollment). Actual monthly PDP premiums vary across plans and regions, ranging from a low of $12.60 for a plan available in New Mexico, to a high of $171.90 for a plan available in Florida. Average monthly PDP premiums, weighted by 2014 enrollment, vary widely in 2015 across regions, ranging from $27.91 per month for PDPs in the New Mexico region (one of only five regions with an average under $35) to $44.56 per month for PDPs in New Jersey and $43.84 in the Idaho/Utah region.

People with modest incomes and assets are eligible for additional assistance with Part D premiums and cost-sharing requirements.

Beneficiaries with limited income (less than 150 percent of the federal poverty level, or $17,655 for a single person; $23,895 for a married couple in 2015) and limited assets ($13,640/single person; $27,250/married couple in 2015) are eligible for the Low-Income Subsidy (LIS) program, or “extra help,” which helps pay for some or all of the Part D monthly premium and cost-sharing amounts. Around 12 million beneficiaries are currently receiving full or partial benefits under the LIS program, depending on their income and asset levels.

Of the 38 million beneficiaries enrolled in Part D plans, about 61 percent (23.2 million) are in PDPs; the others are enrolled in Medicare Advantage drug plans. These enrollment counts from September 2014 include 6.6 million Part D enrollees in employer-only plans. Another 2.6 million Medicare beneficiaries are estimated to be receiving prescription drug coverage from an employer or union plan in which the employer receives subsidies through the Medicare Retiree Drug Subsidy (RDS) program (equal to 28 percent of drug expenses between $310 and $6,350 per retiree in 2014) (Figure 9).2 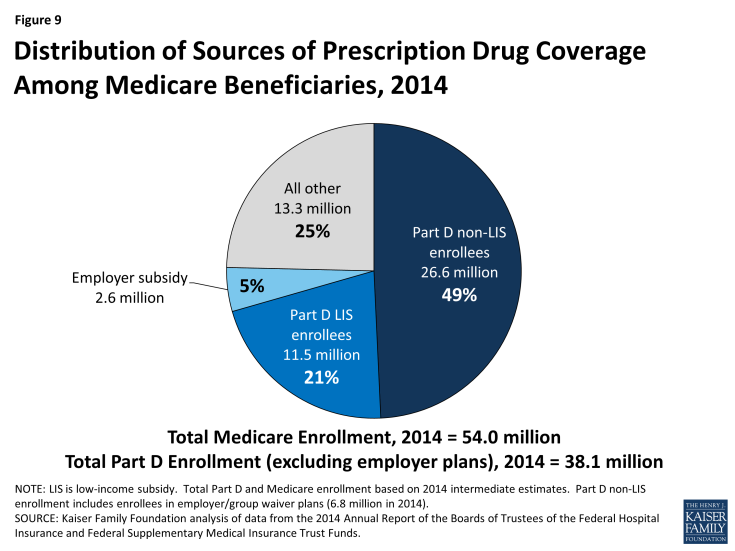 The coverage gap, also known as the “doughnut hole,” is gradually closing by 2020 due to a provision of the ACA.

In 2015, Part D beneficiaries pay 45 percent of their brand-name drug costs, and 65 percent of their generic drug costs in the coverage gap. Medicare is gradually phasing in subsidies in the coverage gap for brand-name drugs and generic drugs, reducing the beneficiary coinsurance rate from 100 percent in 2010 to 25 percent in 2020. In addition, between 2014 and 2019, the out-of-pocket amount that qualifies an enrollee for catastrophic coverage will be reduced, further lowering out-of-pocket costs for those with relatively high prescription drug expenses. In 2020, the catastrophic coverage level will revert to what it would have been absent these reductions.

Medicare’s payments to Part D plans are determined through a competitive bidding process. Private plan sponsors bid each year to offer Part D coverage and are paid monthly capitation payments for each Medicare beneficiary who enrolls in their plan.

Medicare provides plans with a subsidy of 74.5 percent of the cost of standard coverage for all beneficiaries, which is based on annual bids submitted by plans for their expected benefit payments. Premium payments by beneficiaries cover the remaining 25.5 percent. In 2015, private plans are projected to receive average annual payments from Medicare of $548 per enrollee overall and $1,996 for Low-Income Subsidy enrollees; employers are expected to receive, on average, $604 for retirees in employer-subsidy plans.3 Plans also receive additional risk-adjusted payments for high-cost enrollees and reinsurance payments for a share of their enrollees’ costs above the catastrophic threshold. Part D plans’ potential losses or profits are limited by risk-sharing arrangements with the federal government (“risk corridors”).

How much do beneficiaries pay for Medicare benefits? What is Medicare Advantage?