What types of supplemental insurance do beneficiaries have?

Many Medicare beneficiaries have some type of supplemental insurance coverage to help fill the gaps in Medicare’s benefit package and help with Medicare’s cost-sharing requirements.

Medicare provides protection against the costs of many health care services, but traditional Medicare has relatively high deductibles and cost-sharing requirements and places no limit on beneficiaries’ out-of-pocket spending. Moreover, traditional Medicare does not pay for some services vital to older people and those with disabilities, including long-term services and supports, dental services, eyeglasses, and hearing aids. 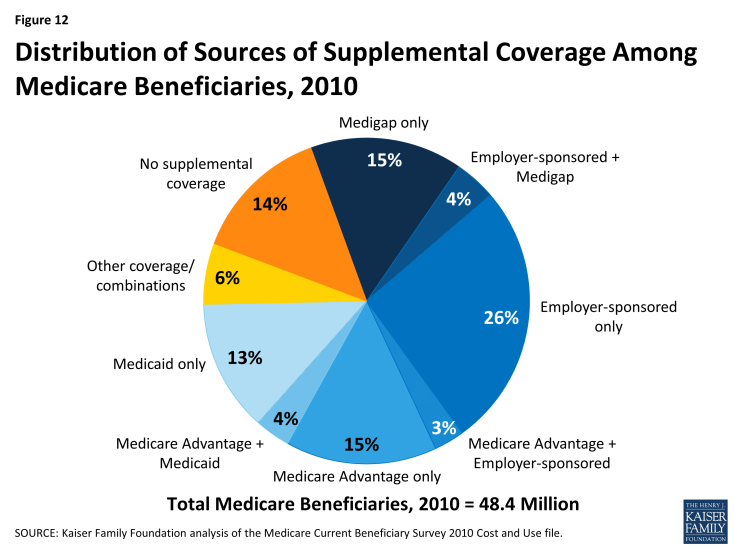 Figure 12: Distribution of Sources of Supplemental Coverage Among Medicare Beneficiaries, 2010

Employer and union-sponsored plans are a leading source of supplemental coverage, providing coverage to about three in ten Medicare beneficiaries.

Employer-sponsored retiree coverage is a primary source of supplemental coverage for Medicare beneficiaries, but access to retiree health benefits is on the decline. In 2014, 25 percent of large firms (those with 200 or more workers) offered retiree health benefits to active workers, a sharp decline from the two-thirds offering health benefits for retirees in 1988 (Figure 13). Employer plans often provide additional benefits, such as additional prescription drug coverage and limits on retirees’ out-of-pocket health expenses. For some Medicare beneficiaries who are working (or have working spouses), employer plans are their primary source of health insurance coverage, and Medicare is the secondary payer. 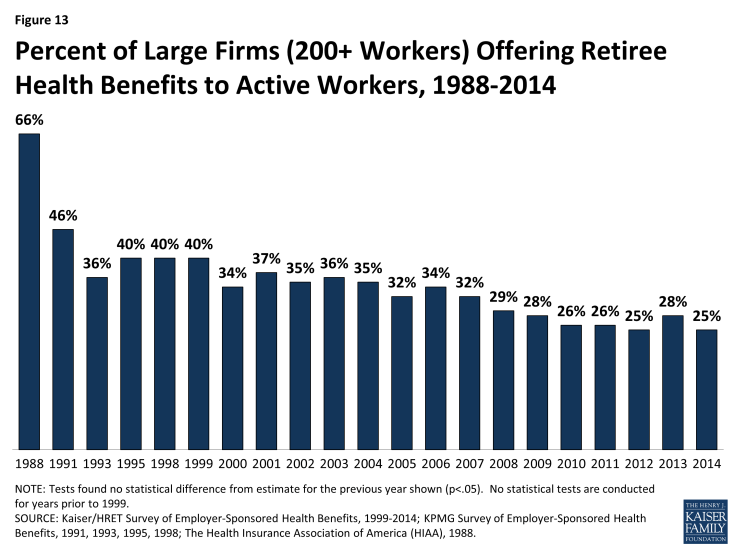 Medicare Advantage plans are another source of supplemental coverage for people on Medicare.

Medigap policies assist beneficiaries with their coinsurance, copayments, and deductibles for Medicare-covered services. Medigap policies help to shield beneficiaries from sudden, out-of-pocket costs resulting from an unpredictable medical event, allow beneficiaries to more accurately budget their health care expenses, and reduce the paperwork burden associated with medical claims. In 2010, about one in five Medicare beneficiaries had an individually-purchased Medicare supplement insurance policy. Currently, there are 10 standard Medigap plans (labeled Plan A-N; Plans E, H, I, and J are no longer available for sale); all Medigap policies of the same letter provide the same benefits (see Appendix 2: Standard Medigap Plan Benefits).2 Premiums vary by plan type, insurer, age of the enrollee, and state of residence.

Medicaid, the federal-state program that provides health and long-term care coverage to low-income people, is a source of supplemental coverage for nearly 10 million Medicare beneficiaries with low incomes and modest assets. These beneficiaries are known as dual eligible beneficiaries because they are eligible for both Medicare and Medicaid.

In addition, some low-income Medicare beneficiaries do not qualify for full Medicaid benefits, but receive help with Medicare premiums and/or some cost-sharing requirements through the Medicare Savings Programs (MSPs).3 Eligibility for this assistance is based on a beneficiary’s income and resources (the latter generally must be less than $7,160 for a single person and $10,750 for a married couple in 2014).4

What is Medicare Advantage? What is the role of Medicare for dual-eligible beneficiaries?