What is Medicare Advantage?

Private plans, such as health maintenance organizations (HMOs), have been an option under Medicare since the 1970s. Medicare now contracts with other types of private plans, including local preferred provider organizations (PPOs), regional PPOs, private fee-for-service (PFFS) plans, and high deductible plans linked to medical savings accounts (MSAs). In 2015, Medicare beneficiaries are able to choose from an average of 18 Medicare Advantage plans offered in their area.1

Medicare Advantage plans receive payments from the federal government to provide all Medicare-covered benefits to enrollees. Plan sponsors are generally required to offer at least one plan with basic drug coverage. More than 8 in 10 Medicare Advantage plans (86 percent) offer drug coverage in 2015, and about four in ten plans (44 percent) offer some coverage beyond the standard benefit design in the coverage gap, mainly for generic drugs only. Plans are required to use any additional payments (known as rebates) to provide extra benefits to enrollees in the form of lower premiums, lower cost sharing, or benefits and services not covered by traditional Medicare. Examples of extra benefits include eyeglasses, hearing exams, preventive dental care, podiatry, chiropractic services, and gym memberships.

Medicare Advantage enrollees generally pay the monthly Part B premium and many also pay an additional premium directly to their plan. In 2015, the average premium for MA-PD plans (weighted by 2014 enrollment) is $41 per month, but varies by plan type and is lower for HMOs ($32) than for local PPOs ($70).2 Medicare Advantage plans are required to place a limit on beneficiaries’ out-of-pocket expenses for Medicare Part A and B covered services of $6,700 in 2015. In 2015, 9 percent of all Medicare Advantage plans have a limit of $3,400 or less, while almost half (48 percent) have a limit of more than $5,000.

Since 2004, the number of Medicare Advantage plan enrollees has increased. 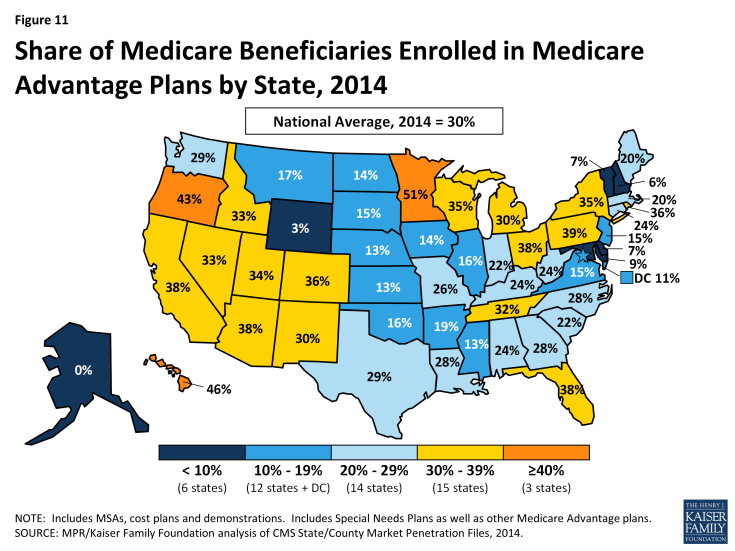 Since 2006, Medicare has paid private plans under a bidding process: plans submit bids that estimate their costs per enrollee for services covered under Medicare Parts A and B. If plans bid higher than the county-level benchmark, enrollees pay the difference in the form of monthly premiums. If plans bid lower than the benchmark, the plan and Medicare split the difference between the bid and the benchmark; the plan’s share is known as a “rebate,” which must be used to provide supplemental benefits to enrollees. Medicare payments to plans are then adjusted based on enrollees’ risk profiles.

Many questions remain to be answered about the quality of care and access to care in Medicare Advantage compared to traditional Medicare.

What is the Medicare Part D prescription drug benefit? What types of supplemental insurance do beneficiaries have?