Medicaid, the largest public health insurance program in the United States, covering health and long-term care services for 73 million low-income individuals, has played a critical role in HIV care since the epidemic began.6,7 It is the single largest source of coverage for people with HIV in the U.S., and its role has grown over time as people with HIV are living longer, new infections continue to occur, and the program was expanded under the Affordable Care Act (ACA).8,9 Medicaid is estimated to cover 42% of adults with HIV.10 By comparison, just 13% of adults in the general population are covered by the program.11 (See Figure 1.) 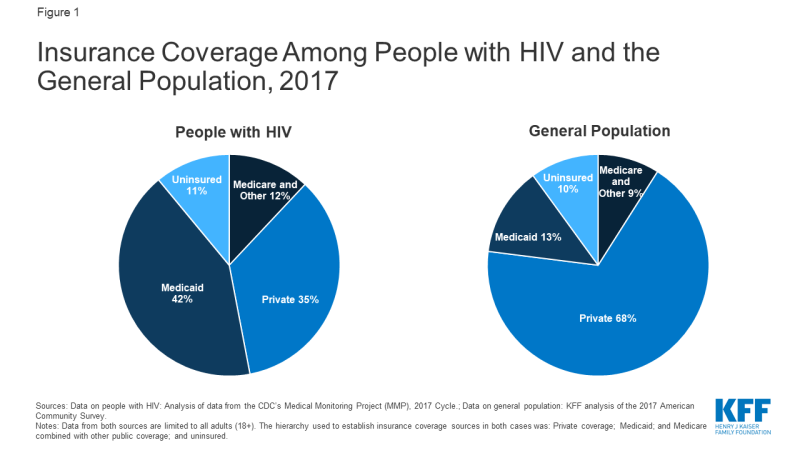 Figure 1: Insurance Coverage Among People with HIV and the General Population, 2017

In 2013, there were approximately 282,100 Medicaid beneficiaries with HIV, compared to 212,900 in 2007 (a 33% increase).12 This number higher today due in part to the ACA’s Medicaid expansion, which has been a key factor in recent coverage gains among people with HIV.13 While Medicaid is a significant source of coverage for beneficiaries with HIV, this group represents less than 1% of the overall Medicaid population. The demographics of Medicaid enrollees with HIV vary significantly from the demographics of the Medicaid population overall: 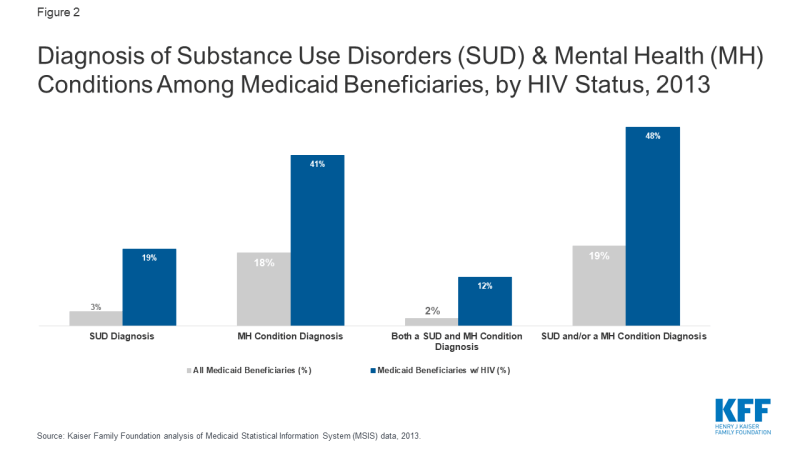 Medicaid Eligibility for People with HIV

Most Medicaid beneficiaries with HIV (65% in 2013) qualify for coverage through a disability pathway, compared to just 15% of the Medicaid population overall.15 The remaining share qualify through multiple other mandatory and optional pathways (see Table 1).

Prior to the ACA, to qualify for Medicaid an enrollee had to be both low income and “categorically eligible,” such as being a person with a disability or pregnant. This presented a “catch-22” for many low-income people with HIV who could not qualify for Medicaid until they were already quite sick and disabled, despite the fact that early access to treatment could help stave off disability and significantly improve health outcomes.

The ACA sought to fundamentally change this by requiring states to expand their Medicaid programs to nearly all individuals with incomes at or below 138 percent of poverty ($17,236 for an individual in 2019).16 However, a 2012 Supreme Court ruling on the constitutionality of the ACA effectively made expansion a state option.17 As of July 2019, 36 states and Washington, D.C. have adopted the ACA Medicaid expansion, where two thirds (64%) of people with HIV live. Fourteen states have not expanded their programs, where 36% of people with HIV live, most of whom are in Florida and Texas.18

Medicaid is a means-tested entitlement program, jointly financed by the federal and state governments. In the traditional (non-expansion) program, the federal government matches state Medicaid spending at rates ranging from 50% to 77% (using a formula based on state per capita income).19 Under the ACA, the federal match for the expansion population is higher. It began at 100% in 2014, and is phasing down to 90% in 2020 and thereafter. 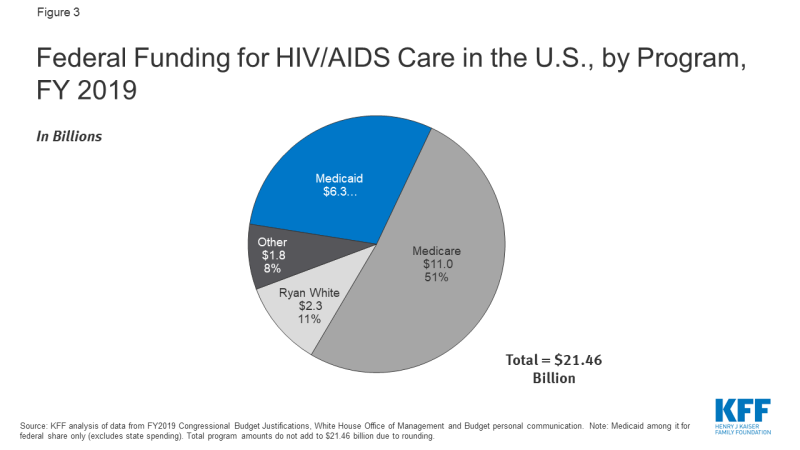 Medicaid beneficiaries with HIV have different spending patterns than beneficiaries overall, and spending on HIV treatment, due to the high cost of HIV medications, has an outsized impact on the program:23,24

Medicaid covers a broad range of services, many of which are important for people with HIV and those at risk. Medicaid benefits are offered on a fee-for-service basis, through capitated managed care organizations (MCOs), or through a combination of these benefit designs.28

In some cases, people with HIV may not have access to all the health services needed to stay healthy through Medicaid alone and rely on supplemental coverage from other payers or programs, including the Medicare program for those who are dually eligible and the Ryan White HIV/AIDS Program, the federal grant program for people with HIV who are uninsured and underinsured.

While most states that have expanded their Medicaid programs have fully aligned the benefits in their traditional program with the benefits for the expansion population, there are technically different requirements between the two, with potential implications for HIV care and prevention.

Though many states elect not to impose any, states are permitted to require “nominal” cost-sharing by some groups of beneficiaries; other groups and services are exempt altogether.

Under traditional Medicaid, states must cover certain mandatory services, specified in federal law, in order to receive federal matching funds, though they have some flexibility in determining the scope of services.29 (See Table 2.)

In addition to the above, traditional Medicaid programs also cover preventive services including ones that are important to people with HIV:

Most enrollees who gain access to Medicaid through the ACA expansion receive the same benefits as traditional enrollees. However, there are technical differences and expansion enrollees must receive services that fall into the ACA’s ten “essential health benefit” (EHB) categories, many of which are important for HIV care (see Table 3):

Benefits within these categories are largely defined through a state-based benchmarking process using a plan of the state’s choosing from federally mandated options or from an alternative plan through a waiver. Most states have used a waiver to select the traditional state Medicaid plan as the benchmark and align traditional and expansion benefits.37 Preventive services are unique in that they are specifically defined to include services receiving an “A” or “B” rating from the United States Preventive Services Task Force (USPSTF), including routine HIV screening and PrEP, which must be offered without cost-sharing.

The ACA also gave states a new option to provide Medicaid health home services to enrollees with chronic conditions (and receive a temporary enhanced federal match of 90% for the first two program years). Health homes encompass a range of services designed to help manage care for those who are chronically ill, such as comprehensive care management and care coordination. The law named several chronic conditions that could be targeted for health homes, and CMS considers others, including HIV, for states pursuing this option. As of March 2019, 38 health homes had been approved in 23 states and the District of Columbia. Among these, four states (WA, AL, MI, and NC) included HIV among other qualifying conditions for enrollment into the health home and one state, Wisconsin, designed a health home specifically targeted at beneficiaries with HIV/AIDS.38

States also have the ability to seek waivers from certain Medicaid requirements. With approval from the federal government, states are permitted to use Section 1115 Medicaid demonstration waivers to experiment with approaches to delivering program benefits in ways that differ from what is allowed under statute, and could impact people with HIV. While waivers are not new to the program, under the Trump administration, CMS has certified waivers that have not been permitted by prior administrations, including those predicating Medicaid benefits on work requirements. Other recent waivers allow for purchasing of marketplace health plans for the expansion population, increasing cost-sharing, providing additional benefits or offering benefits to new populations (e.g., substance use treatment, family planning, etc.), and transforming how care is delivered or paid for.

States also have the option to apply for a “home and community-based services (HCBS)” waiver. Medicaid HCBS waiver authorities include Sec. 1915 (c) and Sec. 1115, both of which allow states to expand financial eligibility and offer HCBS to seniors and people with disabilities who would otherwise qualify for an institutional level of care. HCBS waivers have been important for people with HIV and are used by several states to serve this population. As of 2017, 10 states had an HCBS designed specifically for or to include people with HIV, serving over ten thousand people with HIV.39,40

As the single largest source of health coverage for people with HIV, Medicaid has played a significant role for this population since the HIV epidemic began and its role has continued to grow. In particular, many low income people with HIV who could not previously qualify for Medicaid because they did not meet categorical eligibility criteria, such as disability, have gained access under the ACA. Going forward, it will be important to continue to monitor the impact of Medicaid coverage on people with and at risk for HIV, particularly given that several states are still deciding whether to expand their programs. In addition, assessing the impact of waivers will be important as states seek to offer coverage with different eligibility requirements than has previously been permitted. Early research has shown that some demonstrations, such as work requirements, may increase churn in the program, which could have particularly significant consequences for people who rely on access to care and treatment for survival.41 In addition, in order to harness the benefits of “treatment as prevention” (i.e. when someone with HIV has an undetectable viral load, achieved through use of antiretroviral treatment, HIV cannot be transmitted), it is important to ensure that people with HIV can remain in coverage and engage in care and treatment.