HIV Testing in the United States 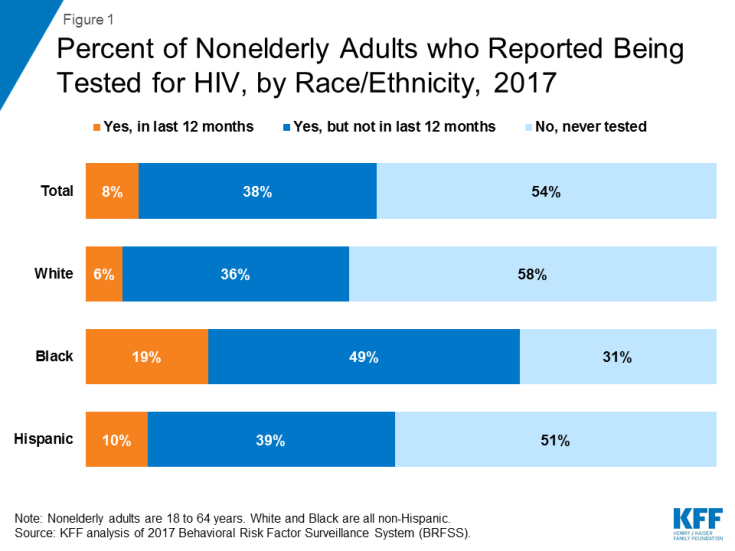 Figure 1: Percent of Nonelderly Adults who Reported Being Tested for HIV, by Race/Ethnicity, 2017

The U.S. Centers for Disease Control and Prevention (CDC) recommends routine HIV screening in health-care settings for all adults, aged 13-64, and repeat screening at least annually for those at higher risk.26,27 Per the CDC individuals who may benefit from at least annual screening include:28

Certain factors are known to reduce the risk of HIV transmission including condom use, antiretroviral treatment leading to durable viral load suppression among those with HIV, which prevents further transmission, and the use of pre-exposure prophylaxis (PrEP) among those at increased risk for HIV.29

CDC recommends that all HIV screening be voluntary, and opt-out (patient is notified that the test will be performed and consent is inferred unless the patient declines) vs. opt-in (test is offered to the patient who must explicitly consent to an HIV test, often in writing).32

HIV testing is mandatory in the U.S. in certain cases, including for: blood and organ donors;33 military applicants and active duty personnel;34 federal and state prison inmates under certain circumstances;35,36 and newborns in some states.37 As of January 2010, HIV testing is no longer mandatory for those wishing to emigrate to the United States or for refugees.38

Most insurers now broadly cover HIV testing, many without cost-sharing, in part due to a decision made by the United States Preventive Services Task Force (USPSTF), an independent panel that assess the net benefit of preventive services and assigns a subsequent letter grade (A-D). Under the ACA, any “A” or “B” graded preventive services must be provided by most insurers without cost-sharing; in addition, traditional Medicaid programs, while not required to provide USPSTF top graded services are incentivized to do so. In 2013, the USPSTF gave HIV screening an “A” rating for all adolescents and adults, ages 15 to 65.39  It  also gave an “A” grade to HIV screening for pregnant women. Both of these recommendations were reaffirmed in 2019.40 The current insurance coverage landscape of HIV testing is as follows:

HIV testing is offered at CDC-funded testing sites (accounting for more than 3 million tests) and in other public and private settings, including free-standing HIV counseling and testing centers, health departments, hospitals, private doctor offices, STD clinics, and mobile testing units.49 The overall positivity rate at CDC funded test sites was 0.9% in 2017, including testing among those newly and previously diagnosed. The positivity rate for new diagnoses was 0.4% but was substantially higher for certain sub-populations (e.g. 3.2% for black men who have sex with men).50 Among CDC-funded testing sites, non-health care facilities have a higher rate of clients testing HIV-positive than do health care and correctional facilities.51

All states/territories have moved to HIV name reporting (in addition to reporting AIDS cases) where a person’s name is reported to the state if they test HIV positive. The state then reports the number of unique positive HIV tests to CDC (no names or other personally identifying information are reported to CDC; only clinical and basic demographic information are forwarded). This is considered confidential HIV testing. There is also anonymous HIV testing offered at some testing sites where identifying information is not collected.

HIV tests aim to detect the virus by looking for evidence of the body’s immune response (antibodies), proteins on the surface of the virus (antigens), or genetic material from the virus (RNA). Detectable antibodies usually develop within 3-8 weeks after infection, but may take longer; the period after initial infection with HIV before detectable antibodies develop is the “window period.”52 In 2010, the FDA approved the first HIV diagnostic test that detects both antibodies and antigen, a component of the virus that triggers the production of antibodies.53 In 2013, the FDA approved the first rapid antigen-antibody test, the first test also to distinguish between acute and established HIV-1 infection.54 Tests for antigen allow for earlier detection of HIV because they can detect the virus before the body has mounted a response, although there will still be a window period of approximately two weeks after initial infection during which no test can detect the virus. RNA, or nucleic acid tests, which detect the virus itself in the blood, are also available, but not routinely used for screening. The test may be used in cases where there has been a high-risk exposure to HIV and as a follow-up test to a positive antibody test.55

The currently HIV diagnostics in the U.S differ based on type of specimen tested (whole blood, serum, or plasma; oral fluid; urine); how the specimen is collected (blood draw/venipuncture; finger prick; oral swab; via urination); where the test is done (laboratory; point-of-care site; at home); and how quickly results are available (conventional or rapid).56,57 The main types of tests are:

After an HIV Test

Following an HIV test, individuals who test positive can expect a confirmatory test and linkage to HIV care and treatment. It is considered a best practice to initiate antiretroviral treatment as soon as possible after diagnosis.60 Doing so facilitates the best possible clinical outcomes for the HIV positive individual and is also a prevention opportunity, as once that individual has an undetectable viral load they cannot transmit HIV to others.61  Individuals who test HIV negative but who are at high risk for the infection, may be referred to additional prevention services such as PrEP which can reduce the risk of HIV acquisition through sex by more than 90%.62