The Ryan White HIV/AIDS Program (Ryan White), the largest federal program designed specifically for people with HIV in the United States, serves over half of those in the country diagnosed with the disease.4 First enacted in 1990, the Ryan White Program has played an increasingly significant role as the number of people living with HIV has grown over time and people with HIV are living longer. It provides outpatient care and support services to individuals and families affected by the disease, functioning as the “payer of last resort” by filling the gaps for those who have no other source of coverage or face coverage limits or cost barriers.

The program has been reauthorized by Congress four times since it was first created (1996, 2000, 2006, and 2009) and each reauthorization has made adjustments to the program. The current authorization lapsed in FY 2013, but the program has continued to be funded through the annual appropriations process as there is no “sunset” provision or end date attached to the legislation. The program is administered by the HIV/AIDS Bureau (HAB) at the Health Resources and Services Administration (HRSA) of the Department for Health and Human Services (HHS), and programs and services are delivered by grantees and sub-grantees at the state and local levels.

HRSA is one of the lead agencies in the federal government’s  Ending the HIV Epidemic (EHE): A Plan for America initiative, launched in 2019, and the Ryan White Program is set to play a key role in efforts to reach the goal of reducing new HIV infections by 75% in five years and by 90% in ten years. The initiative includes new federal funding, some of which has been channeled to Ryan White.

In the early months of 2020, the U.S. was hit by the COVID-19 pandemic which dramatically impacted health, health coverage, and health access for all people. The Ryan White Program quickly pivoted to new ways of providing care, seeking to ensure that people with HIV were retained in care, even when the programs that serve them were strained. Recognizing the new stresses the pandemic might mean for Ryan White, Congress appropriated emergency supplemental funding for the program through the CARES Act
(See Table 1).

More than half a million people receive at least one medical, health, or related support service through the program in 2018, with many clients receiving multiple types of services:5 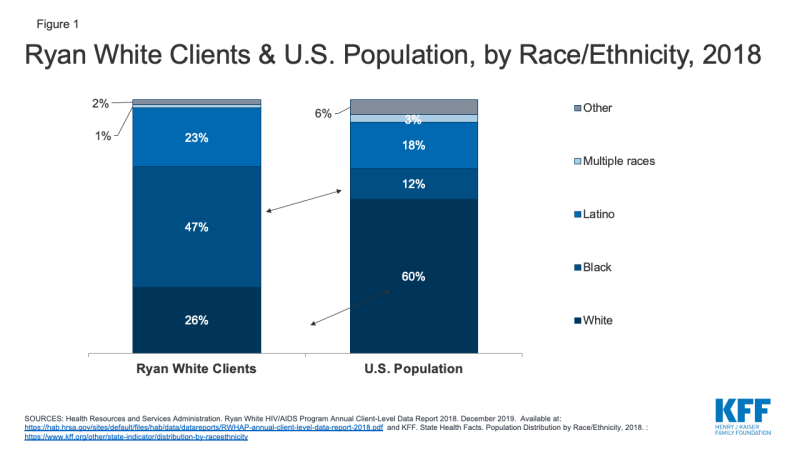 The Ryan White Program is the third largest source of federal funding for HIV care in the U.S., after Medicare and Medicaid.6 Federal funding for the program, which is appropriated by Congress annually, began in FY1991 and increased significantly in the mid-1990s, primarily after the introduction of highly active antiretroviral therapy (HAART).7 For many years thereafter, funding continued to increase, but at slower rates, eventually leveling out and not keeping pace with inflation.8 However, new funding as part of the EHE Initiative ($70 million in FY 2020) marked the first significant increase to the program in many years.9  Additional funding was provided as part of one of the COVID-19 relief packages ($90 in FY2020).

The Ryan White HIV/AIDS Program is composed of “Parts,” each with a different purpose and funded as a separate line item through annual appropriations. Funding is provided to states and territories (Part B) cities (Part A), and to providers, community-based organizations (CBOs), and other institutions (Parts C, D, and F), in the form of grants. In recognition of the varying nature of the HIV epidemic, grantees are given broad discretion to design key aspects of their programs, such as specifying client eligibility levels and service priorities. However, there are requirements, including that grantees are required to spend 75% or more of funds on “core medical services” under Parts A through C10 and that all state AIDS Drug Assistance Programs (ADAPs) must have a minimum formulary for medications.11  (See Table 1 for a description of program parts and FY2020 funding levels).

While many clients have gained coverage under the ACA, Ryan White continues to play a critical role as a safety net provider for those who remain uninsured and filling gaps for clients with traditional insurance, including assisting with insurance affordability. Importantly, Ryan White support appears to make a significant difference in achieving sustained viral suppression. Viral suppression affords optimal health outcomes at the individual level and, because when an individual is virally suppressed they cannot transmit HIV, significant public health benefit.14 Overall, those with Ryan White support were significantly more likely to have sustained viral suppression compared to those without (68% v. 58%) and this pattern was observed across all coverage types (see Figure 2).15 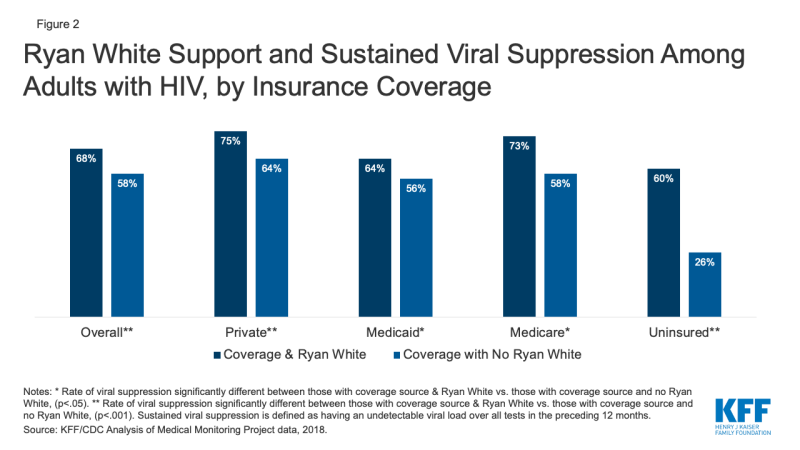 First enacted as an emergency measure, the Ryan White program has grown to become a central component of HIV care in the U.S., playing a critical role in the lives of many low and moderate-income people with HIV. Looking ahead, there are several key issues facing the program that will be important to monitor, including: