Insurance Coverage Changes for People with HIV Under the ACA

New as of May 20, 2019: An Update on Insurance Coverage Among People with HIV

Prior to the Affordable Care Act (ACA), people with HIV faced limited access to insurance coverage due to several barriers, including pre-existing condition exclusions, high costs, Medicaid eligibility limitations, and other challenges. Several key provisions of the ACA removed these barriers. With discussion underway about the future of the ACA, including repealing it in full or in part, it is important to understand how the ACA has changed coverage for people with HIV.

This brief provides the first national estimates of changes in insurance coverage among people with HIV since the implementation of the ACA.1,2 It is based on analysis of data from the Centers for Disease Control and Prevention (CDC). We find that coverage increased significantly for people with HIV due to the ACA’s Medicaid expansion; indeed, increased Medicaid coverage in expansion states drove a nationwide increase in coverage for people with HIV. In addition, the share relying on the Ryan White HIV/AIDS Program also increased. To the extent that ACA repeal efforts include elimination of the Medicaid expansion option for states, most people with HIV who gained this type of insurance could be at risk for losing coverage.  In addition, elimination of private market protections- such as bans on preexisting condition exclusions and rate setting tied to health status- would also limit access for this population.

Prior to the ACA, many people with HIV faced limited access to insurance coverage due primarily to three types of barriers:

Several key provisions of the ACA removed these barriers. These include: eliminating pre-existing conditions exclusions; prohibiting private insurers from denying coverage or charging higher premiums to individuals based on their health status; eliminating annual and lifetime benefits limits; and providing subsidies to assist with purchasing private coverage through the Marketplaces for those between 100% and 400% of the federal poverty level (FPL). In addition, the law required states to expand their Medicaid programs to cover eligible individuals below 138% of FPL, basing eligibility on income and residency status alone and addressing the catch-22 described above. Although a June 2012 US Supreme Court decision effectively made Medicaid expansion a state option, to date, 32 states (including DC) have expanded their programs (where an estimated 60% of people with HIV live).5  Still, the ruling meant that individuals who live in non-expansion states and are below 100% FPL fall into what is known as the “coverage gap” – neither eligible for the Medicaid program nor subsidies to make purchasing coverage through the Marketplaces more affordable. It is estimated that there are over 2.5 million individuals in the coverage gap, including thousands with HIV.6

To better understand how the ACA has affected coverage for people with HIV, we analyzed data from the CDC’s Medical Monitoring Project (MMP), a surveillance system that produces nationally representative information about people with HIV who are in care.7 Since the MMP currently surveys only individuals in care, data in this report is not representative of all people with HIV in the United States. We compared insurance coverage of people with HIV in care in 2012, before the implementation of major ACA expansion reforms, to 2014 (full methodology in Appendix B). In this analysis we looked at nationwide changes as well as changes within states that expanded Medicaid and those that did not expand.  We also looked at whether the role of the Ryan White Program changed over this period. Since the major coverage reforms under the ACA were implemented in 2014, this data note provides an early glimpse of the insurance changes that have taken place among people with HIV in the ACA era. As was seen across the nation as a whole, it is likely that coverage gains have been greater in the subsequent years.8 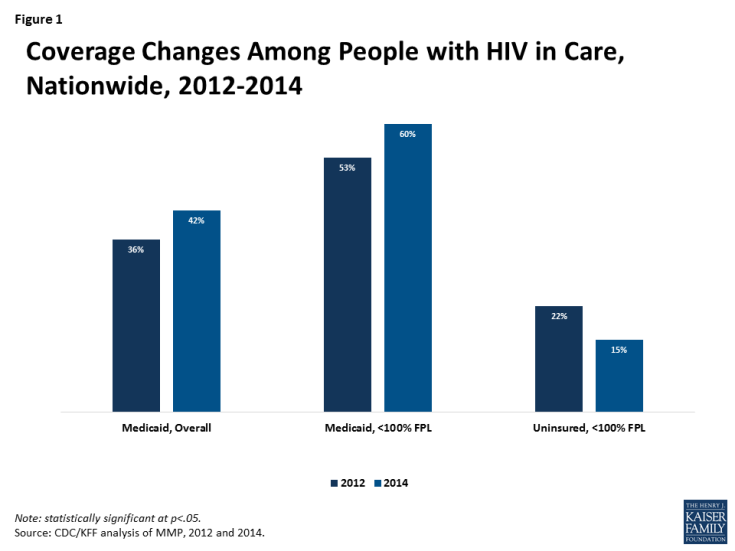 Medicaid Expansion States. In the Medicaid expansion states sampled, Medicaid coverage rose significantly, from 39% in 2012 to 51% in 2014 and the share uninsured decreased from 13% to 7%.9 Significant differences were also observed among subgroups (see Figure 2, additional detail available in Appendix A). 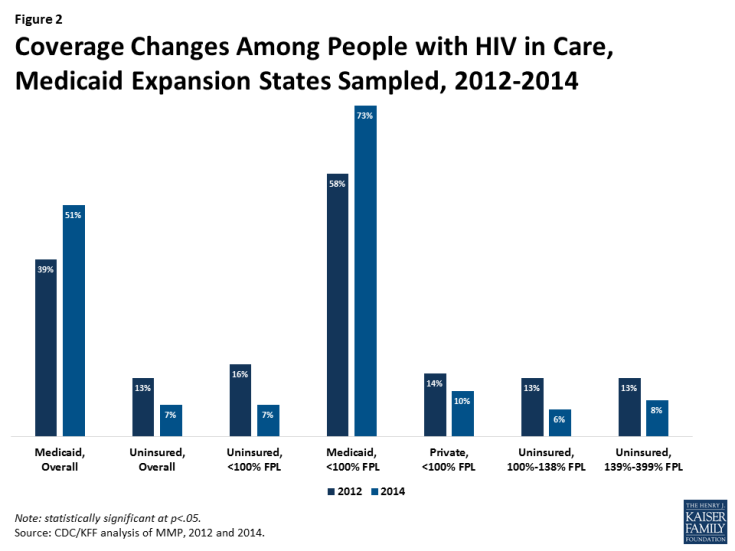 Non-expansion States. Among the non-expansion states sampled,10 no significant gains in coverage or drops in the share of the  uninsured occurred between 2012 and 2014, though those below 100% FPL saw gains in private insurance, rising from 5% in 2012 to 13% in 2014 (additional detail available in Appendix A). 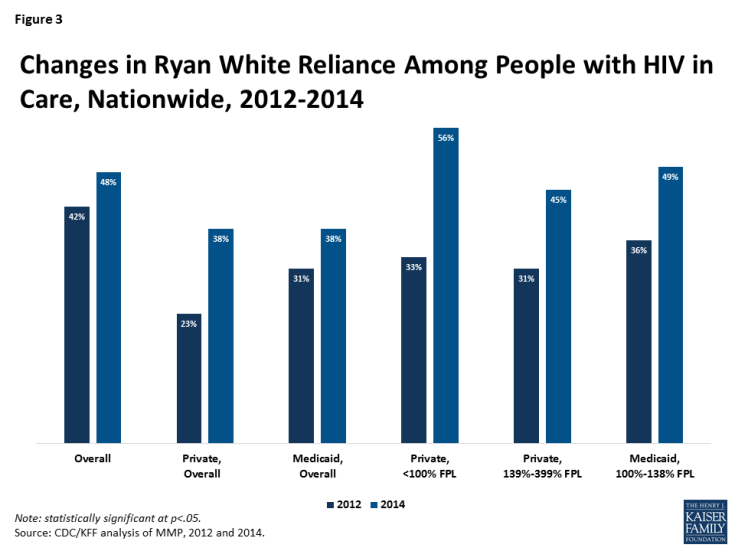 Figure 3: Changes in Ryan White Reliance Among People with HIV in Care, Nationwide, 2012-2014

Ryan White. The role of the Ryan White Program has increased since implementation of the major coverage reforms under the ACA. Nationwide, the share of people with HIV in care relying on Ryan White rose from 42% in 2012 to 48% in 2014. In particular, the share of those with private insurance relying on the program rose from 23% in 2012 to 38% in 2014. Those with Medicaid also increased their reliance on Ryan White (from 31% in 2012 to 38% in 2014). While the uninsured did not see a significant change in reliance on Ryan White during this period, about 9 in 10 HIV positive uninsured individuals in care were already supported by the program in 2012. Additional coverage changes were observed among some subgroups (see Figure 3, additional detail available in Appendix A).

Overall, this analysis suggests that the ACA has had a significant impact on coverage for people with HIV in the U.S., due to Medicaid expansion. To the extent that ACA repeal efforts include elimination of the Medicaid expansion option for states, most people with HIV who gained coverage would likely lose it unless states adopt alternative approaches to retaining the newly covered population in the program.

This analysis relies on data from the Medical Monitoring Project (MMP), a CDC surveillance system designed to produce nationally representative estimates of behavioral and clinical characteristics of HIV-infected adults (those aged 18 and older) in the United States.13 During 2009–2014, MMP employed a three-stage, complex sampling design in which US states and territories were sampled, followed by facilities providing outpatient HIV clinical care in those jurisdictions, and then HIV-infected adults (aged 18 years and older) receiving care in those facilities. We used MMP data collected from adults with at least one HIV clinical care visit to participating facilities during January to April of 2013 and 2014. Findings describe adults receiving HIV clinical care during these time periods.

For all respondents in MMP, we examined self-reported insurance coverage as well as payment source for antiretroviral medicines using responses to the following questions “During the past 12 months, what were all the kinds of health insurance or health coverage you had?” and “During the past 12 months, what were the ways your antiretroviral medicines were paid for?”  Response options included insurance programs (Medicaid, Medicare, private insurance, Veteran’s Administration, Tricare or CHAMPUS coverage, other public insurance, and other unspecified insurance) as well as medical care, medications and other services paid for by the Ryan White HIV/AIDS Program (Ryan White or the AIDS Drug Assistance Program). “Other specify” responses were extensively recoded to reflect the most accurate coverage type when possible. It is important to note that patients may not be aware of all the services they receive that are paid for by the Ryan White HIV/AIDS Program (the program provides funding directly to service organizations in many cases) and therefore, the estimates of the number of individuals who receive Ryan White HIV/AIDS Program services is likely an underestimate.

We estimated weighted percentages of individuals with the following types of health care coverage: no coverage (uninsured), private insurance, Medicaid, Medicare, and other (specified). Because respondents in MMP may indicate more than one type of coverage, we relied on a hierarchy to group people into mutually-exclusive coverage categories. Specifically, the hierarchy groups people into coverage types in the following order:

In most cases, this hierarchy classifies individuals according to the coverage source that serves as their primary payer. People who do not report any of the sources of insurance coverage above are classified as uninsured.  As noted above, we separately assess weighted percentages of persons receiving assistance through the Ryan White HIV/AIDS Program by health coverage type. This analysis depicts coverage for those who are uninsured, covered by private insurance, or covered by Medicaid. Findings related to those with other coverage or Medicare were excluded from this analysis given that insurance changes within those categories would not have been impacted by the ACA provisions examined for this work.

We assessed distributions of health coverage type in 2012 compared to 2014, overall and by whether the participant lived in a Medicaid expansion or non-Medicaid expansion state (as of 2014). We further stratified the analysis to examine health coverage types by income, race/ethnicity, and gender. Income is presented as a share of the federal poverty level (FPL); race/ethnicity, and gender was self-reported. Statistical comparisons between the percentage of the population with a particular health coverage type and the percentage receiving Ryan White HIV/AIDS Program assistance in 2012 compared to 2014 were made using chi-square tests.

It is also important to note that these data reflect only the first two open enrollment periods of the ACA and therefore it is possible that coverage has continued to increase (as it has for the U.S. population overall).

The MMP categorized gender as male, female, or transgender based on self-identification. Participants are also classified as transgender if reported sex at birth and current reported gender differ. Findings by gender are presented only by male and female categories in this analysis due to the limited sample size of transgender individuals and the fact that no coverage changes among this population met statistical significance.