Prescription drugs have returned to the national policy debate, with both Congress and the administration developing proposals to address drug prices. Though attention in current federal actions is largely focused on Medicare and private insurance drug prices, federal legislation also has been recently introduced or enacted that would affect Medicaid prescription drug policy. States also remain concerned about the budgetary impact of new, high cost drugs and Medicaid drug spending, given fiscal pressures. Understanding utilization and spending patterns in Medicaid can help illustrate the potential effects of proposed policy changes or targeted policy actions.

This brief analyzes data on Medicaid drug spending and utilization from 2015 to 2019, the period after the major expansion of Medicaid under the ACA and through most recent complete data available. It examines trends across drug groups, brand or generic status, and biologic status and takes a closer look at some of the drug groups that are experiencing changes in utilization and spending or have been the subject of recent policy debates. As described in more detail in Appendix B, it is based on Medicaid State Drug Utilization Data merged with IBM Micromedex RED BOOK data to analyze trends by drug group and brand or generic status. It also incorporates data from the Food and Drug Administration (FDA) to analyze trends among biological products. Because of data restrictions, spending does not reflect rebates. This analysis updates previous analysis of Medicaid outpatient prescription drug trends.

The Medicaid prescription drug benefit is an optional benefit that all states provide. The state may provide the benefit in a fee-for-service environment or through managed care. Most states provide the benefit through managed care, although some states have moved to carve out specific classes or the pharmacy benefit altogether. State Medicaid programs reimburse pharmacies for prescription drugs based on the ingredient costs for the drug and a dispensing fee for filling the prescription; they do not buy drugs directly from manufacturers.

Under the Medicaid Drug Rebate Program (MDRP), manufacturers that want their drugs covered by Medicaid must sign an agreement with the Secretary of Health and Human Services stating that they will rebate a specified portion of the Medicaid payment for the drug to the states, who in turn share the rebates with the federal government. In return, Medicaid must cover almost all FDA-approved drugs that those manufacturers produce.1 However, state Medicaid programs can and do implement drug utilization management techniques, such as preferred drug lists and prior authorizations, to manage utilization and spending.

In addition to federal statutory rebates, most states negotiate supplemental rebates. Both statutory and supplemental rebates account for a sizeable share of prescription drug spending, lowering aggregate drug spending by about 55% in 2019. Rebates also increased during the period of this analysis, leaving Medicaid net spending in 2019 almost the same as net spending in 2015. Rebates vary across brand and generic drugs and specialty and non-specialty drugs due to the rebate formulas and rules that require Medicaid to receive the “best price” available to other purchasers (excluding certain government programs).2 A CBO analysis recently found that on average, Medicaid obtained rebates of approximately 77% of the Medicaid retail price for certain brand-name drugs.3  Medicaid rebates also include an inflation-based component to account for rising prices over time, which insulates the program from large price hikes. The specific rebate on a given drug is proprietary for both statutory and supplemental rebates. Because of this, it is not possible to include them in this analysis of trends by drug or drug group. While rebates have implications for net Medicaid spending, understanding trends in gross spending and utilization provides important context for pharmacy benefit policy by highlighting underlying cost factors. 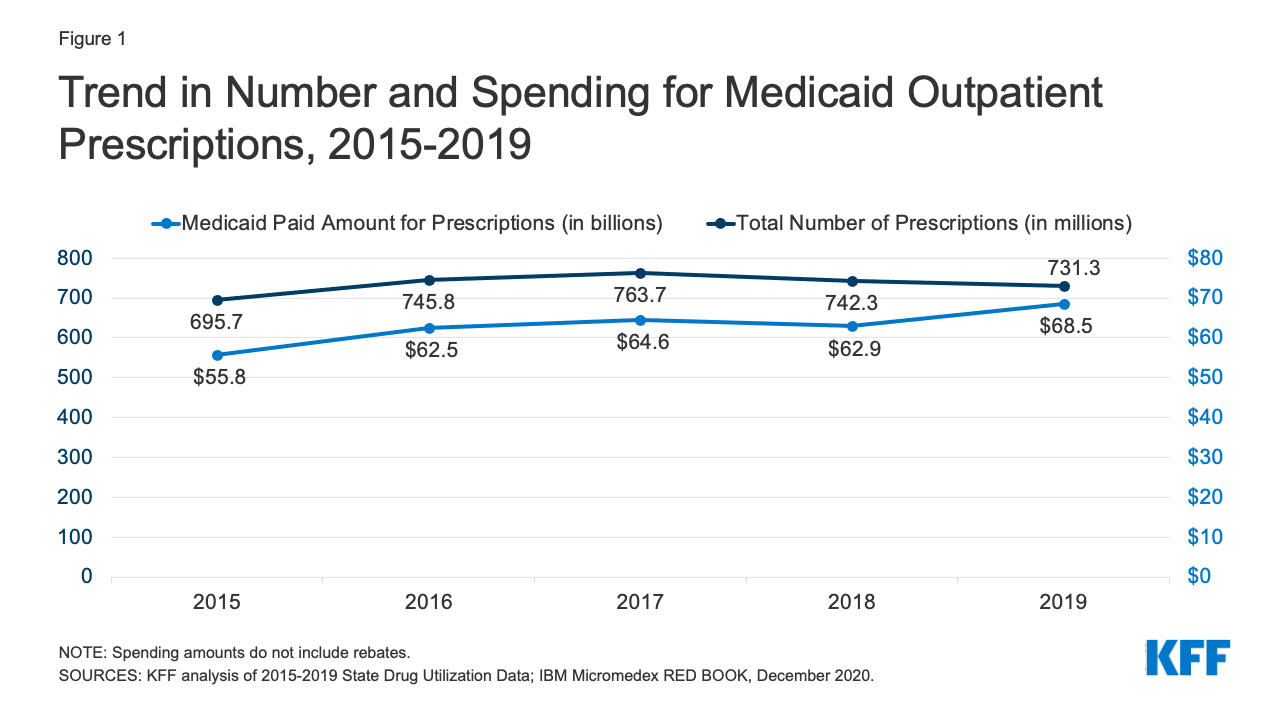 Figure 1: Trend in Number and Spending for Medicaid Outpatient Prescriptions, 2015-2019 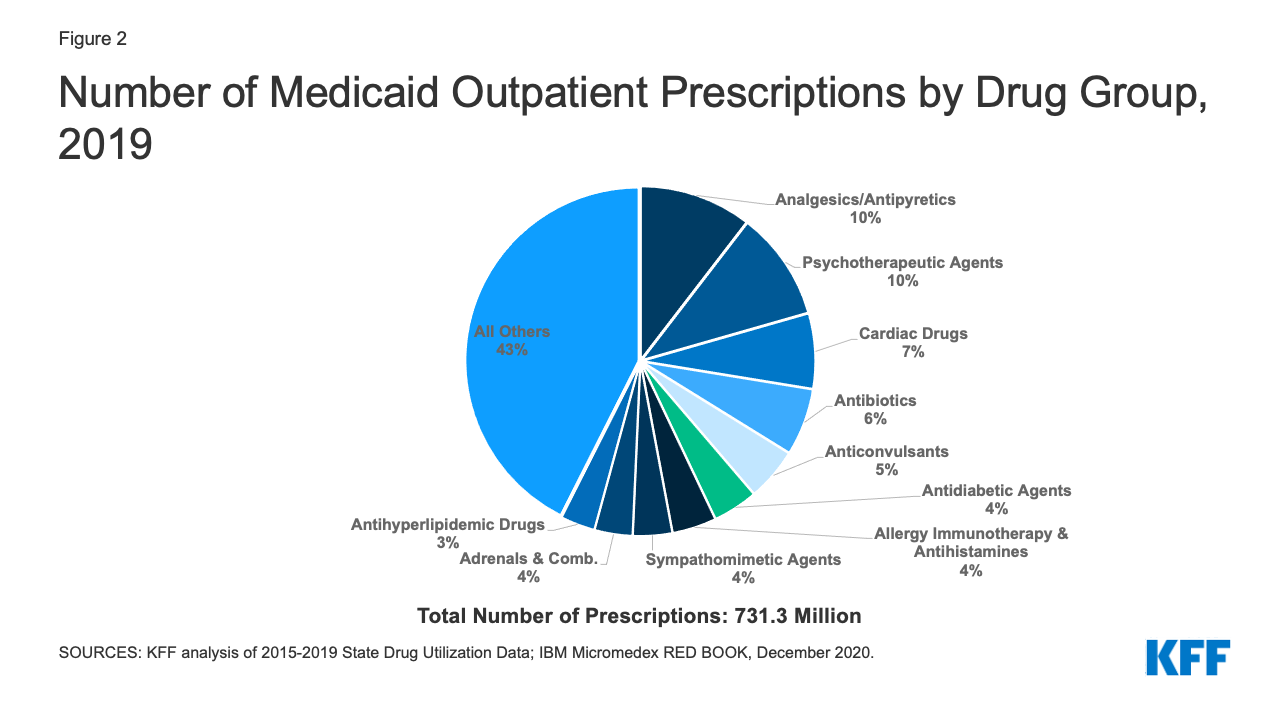 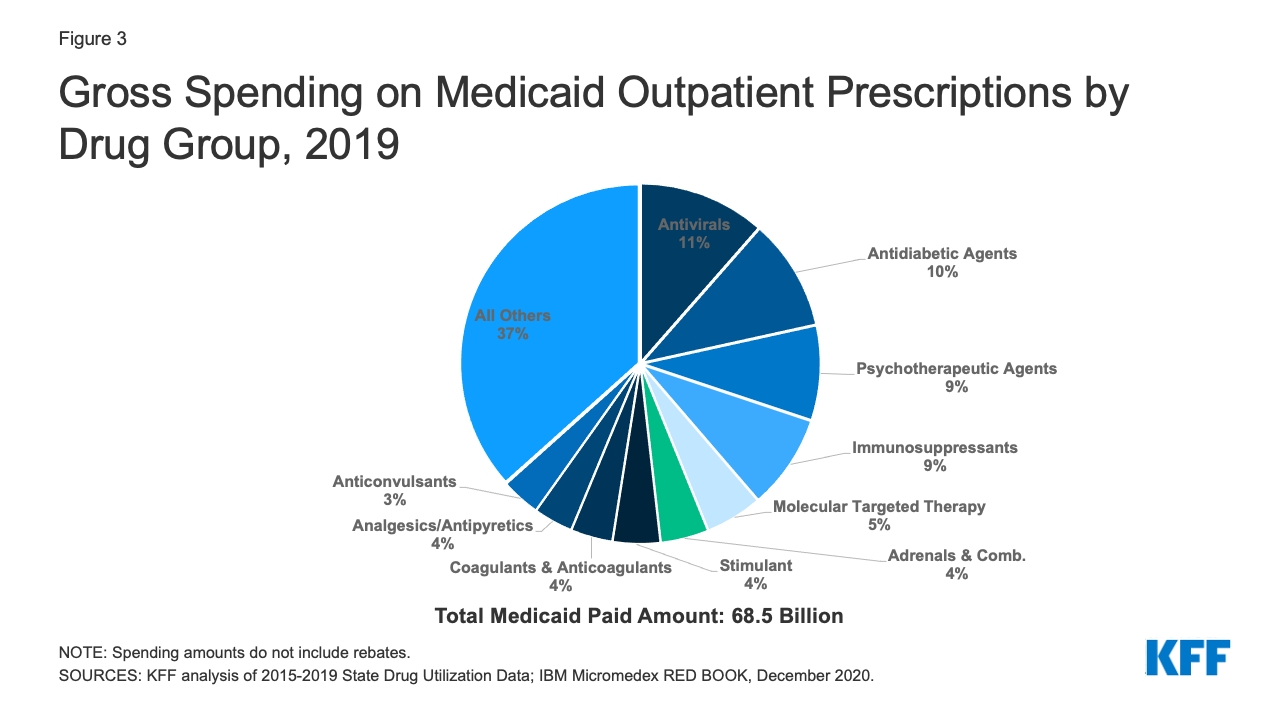 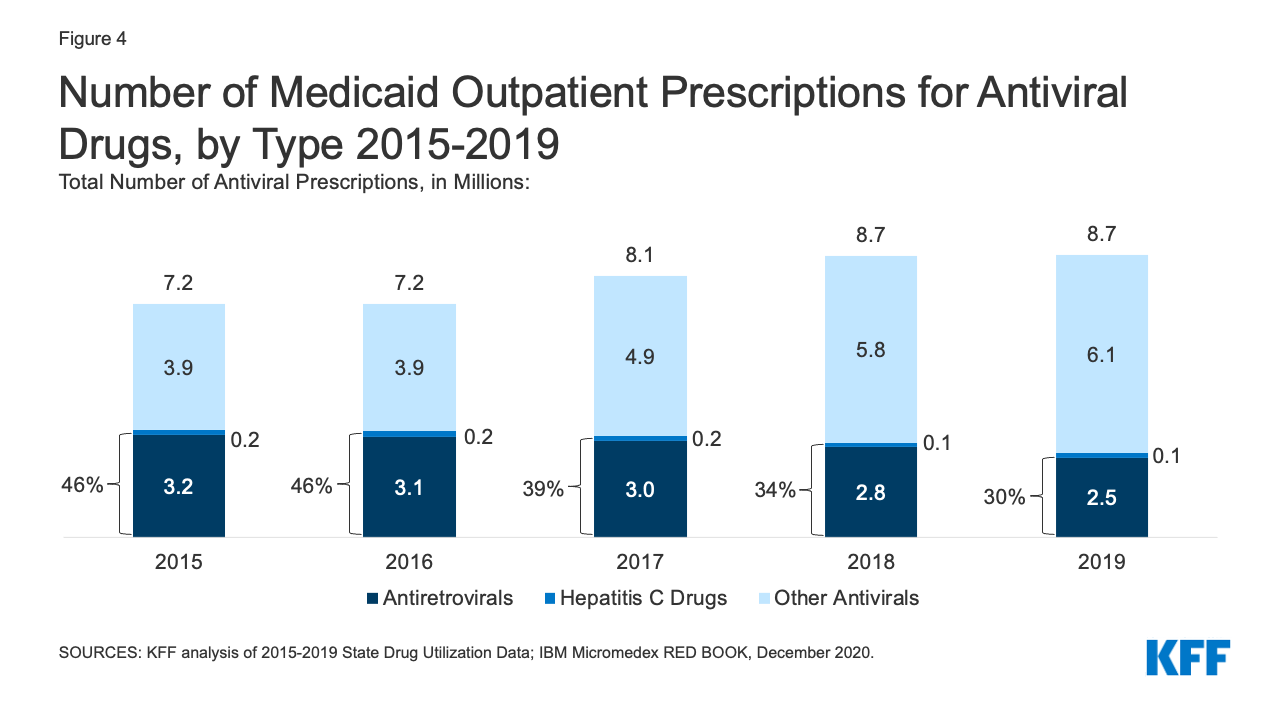 Over the entire period, antivirals were consistently the most costly drug group in Medicaid before rebates, driven by spending for drugs used to treat HIV and hepatitis C drugs. Antivirals accounted for 11% of gross Medicaid outpatient drug spending in 2019 (Figure 3). Antiretrovirals and hepatitis C drugs accounted for, on average, 91% of Medicaid antiviral spending each year before rebates (Figure 5). Gross spending on antivirals is disproportionate to their utilization (they were not among the top ten most frequently prescribed drug groups) and reflects the high cost of these drugs. While gross spending on hepatitis C drugs has decreased since 2016 due to competition, these drugs, like Harvoni and Sovaldi, account for a relatively large share of spending due to their high per-treatment cost. 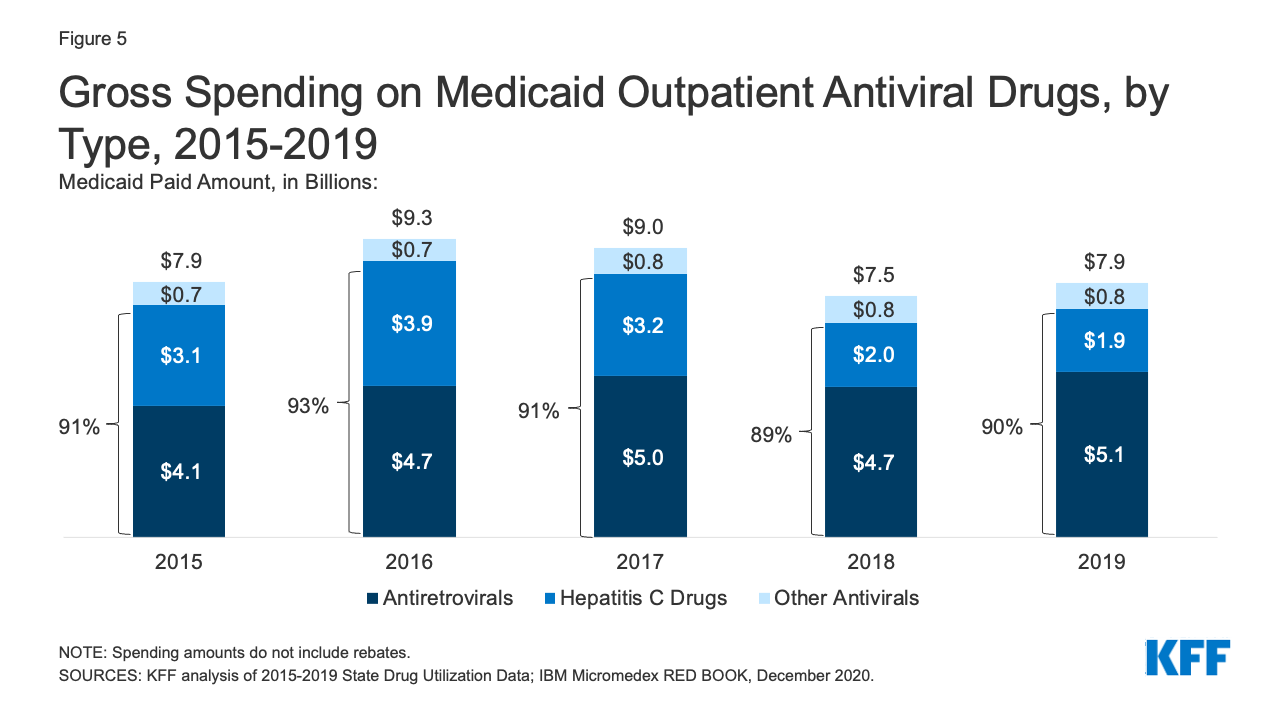 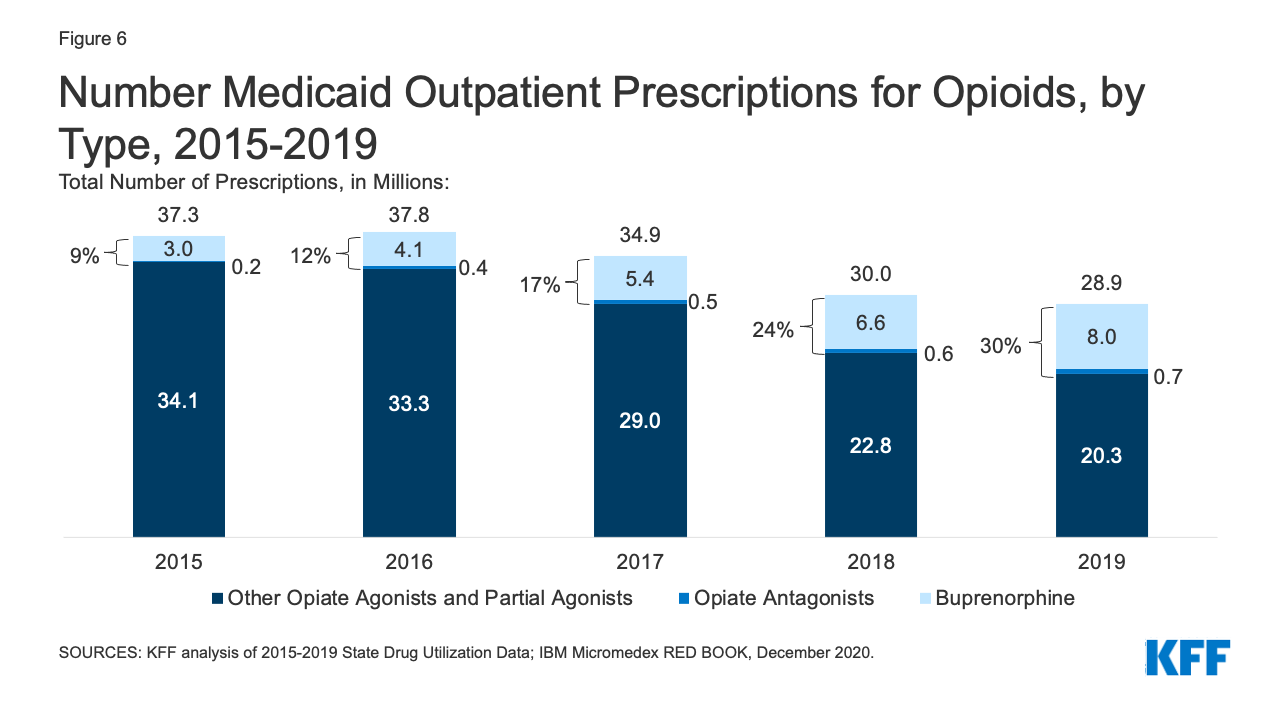 While overall gross spending on opioids remained relatively stable during the period, buprenorphine and opiate antagonists made up an increasing share of opioid spending before rebates. The share of gross opioid spending on buprenorphine and opiate antagonists grew from 36% in 2015 to 71% in 2019 (Figure 7). At the same time, gross spending on other opiate agonist and partial agonist prescriptions, the vast majority of which are generic, decreased by 49% over the period, reflecting the decline in the number of prescriptions to treat pain. 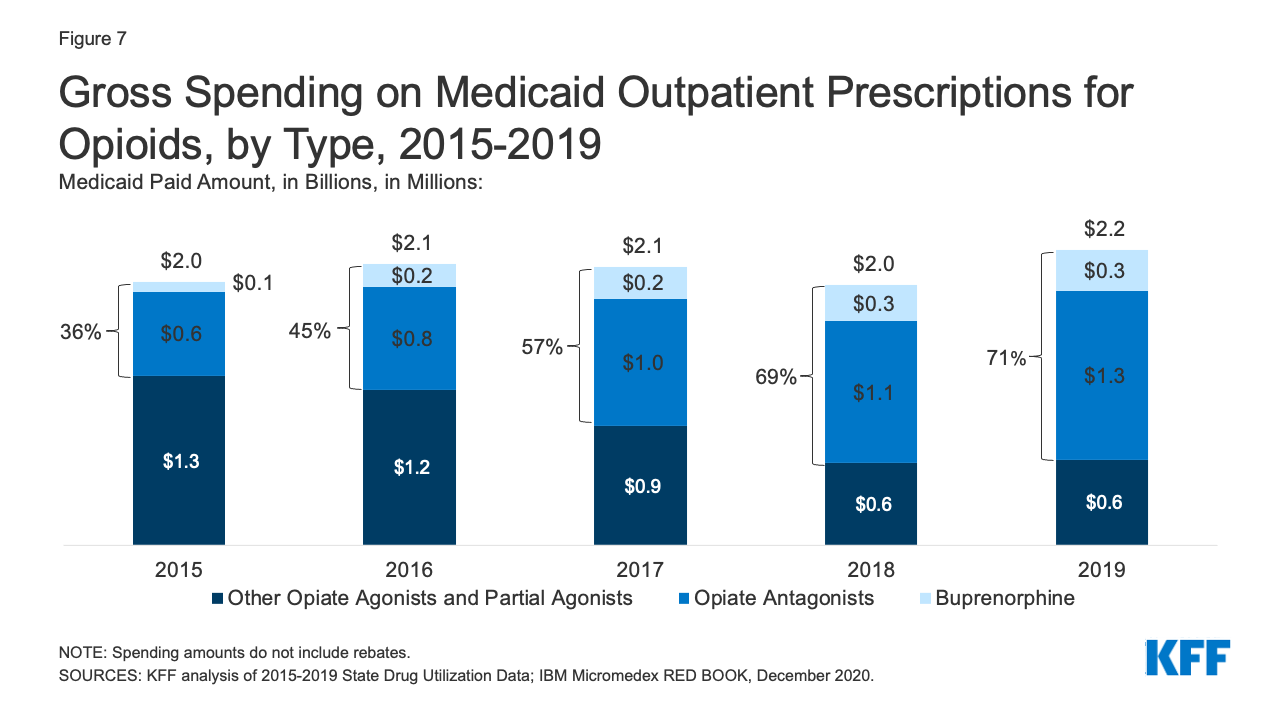 Antidiabetics were consistently in the top 10 most prescribed and most costly drug groups throughout the period of study. Their use grew 17% from 2015 to 2019, and Medicaid gross spending grew 53% from 2015 to 2019 (Appendix Table A1 and Figure 8). While insulins remained the largest source of gross spending on antidiabetics, non-insulin antidiabetic treatments, such as glucagon-like peptide-1 (GLP-1) receptor agonists and sodium glucose co-transporter (SGLT) inhibitors accounted for a growing share of spending (Figure 8). 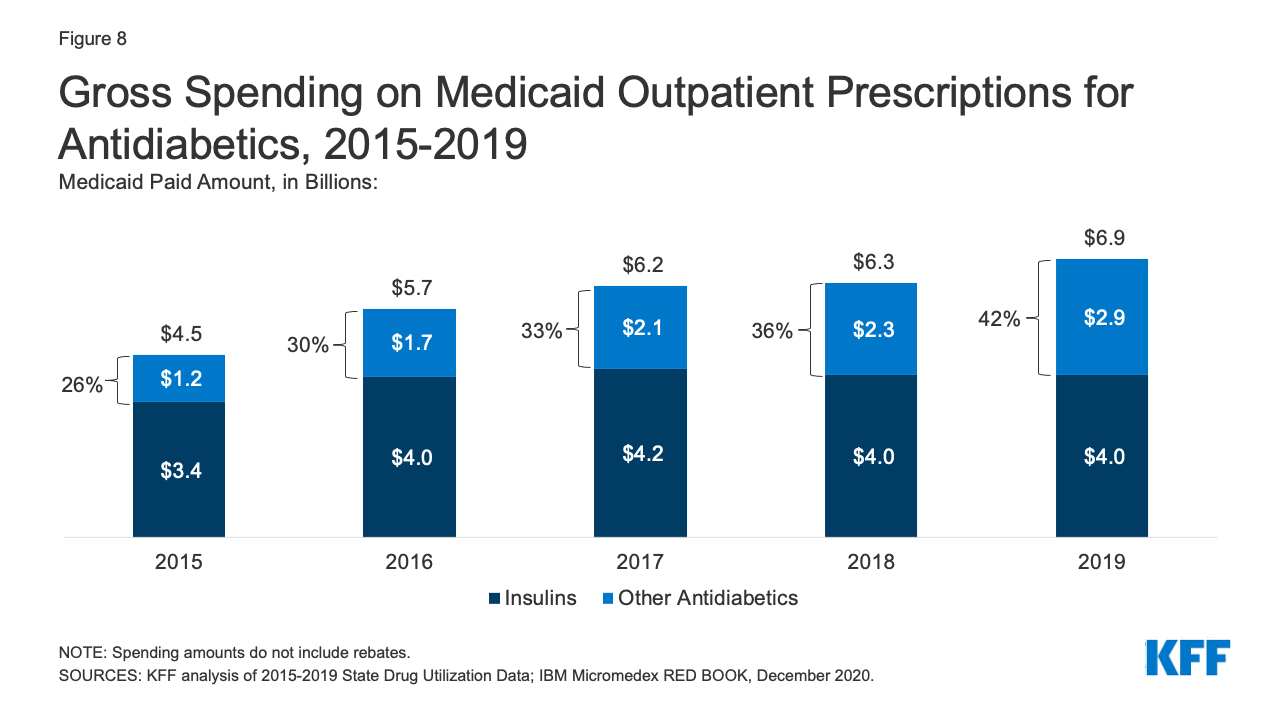 Medicaid spending on insulins before rebates remained relatively stable throughout the period. While the price of an insulin prescription nearly doubled between 2012 and 2016, Medicaid gross spending on insulin has remained around $4 billion since 2016, apart from 2017 when spending on insulins rose to $4.2 billion (Figure 8). Further, Medicaid gross spending per unit of insulin leveled off in 2016, then began to fall from a high of $0.33 in 2017 to $0.30 in 2019 (Figure 9). It is not clear from this data what has been driving this trend. Across payers, there has been a national pattern of declining insulin prices in recent years due to recent approvals of biosimilars and generics. However, because brand drugs are lower cost on net for the Medicaid program, likely due to high rebate amounts, Medicaid insulin utilization remains concentrated in brand drugs, and generic drugs are not similarly driving down insulin spending for Medicaid. 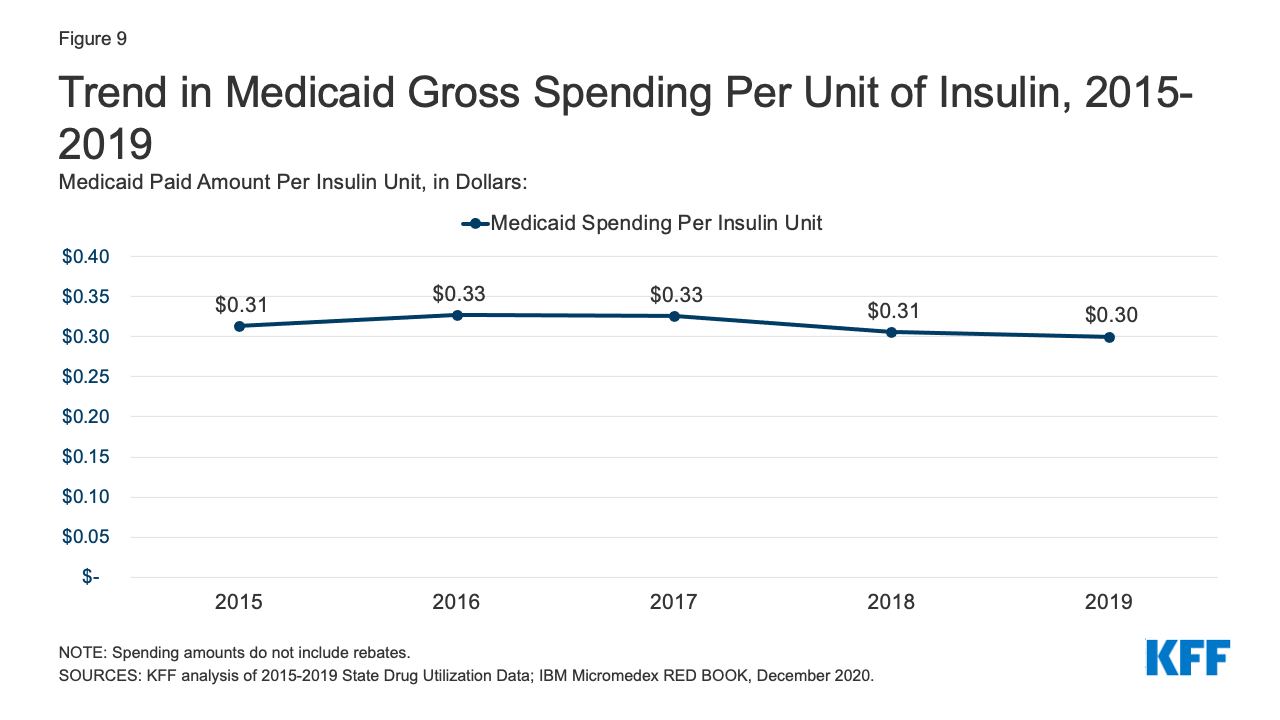 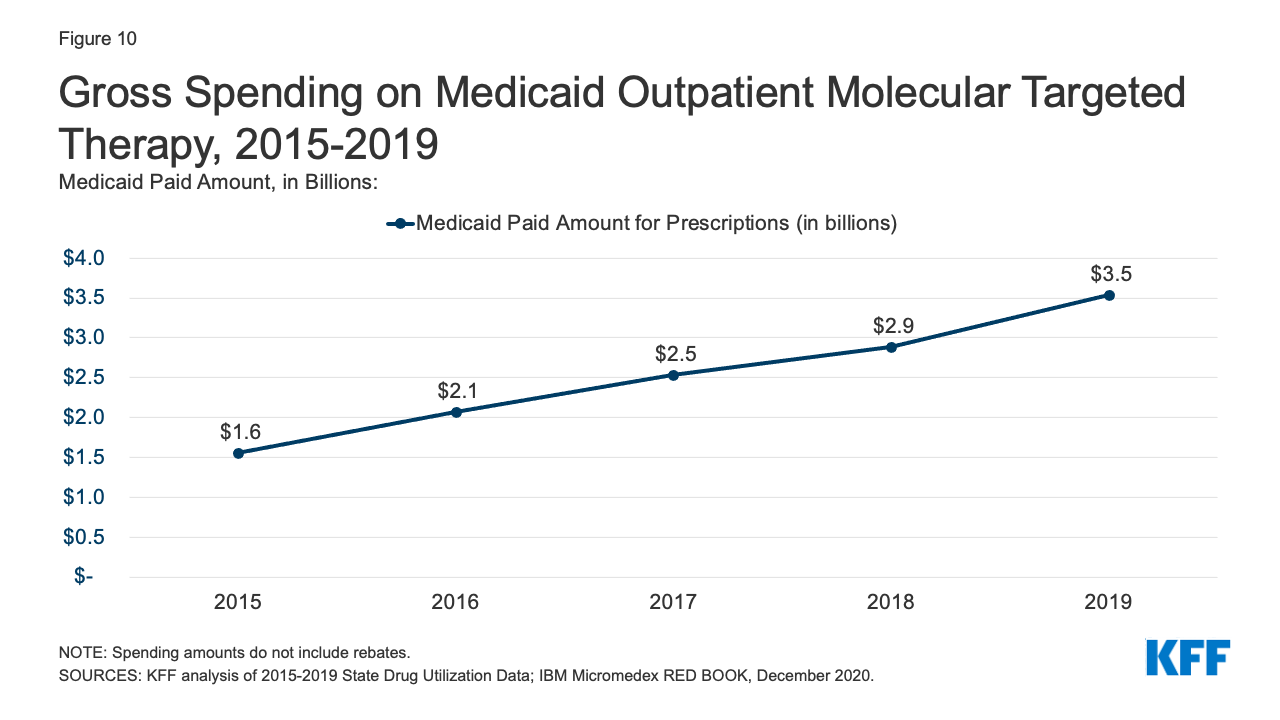 State preference for brand or generic drugs is complex due to the incentives created by the Medicaid Drug Rebate Program. Because generic drugs have lower list prices than brand-name drugs but are still therapeutically equivalent to their corresponding brand drugs, state Medicaid programs may implement required generic substitution policies to steer utilization to generic drugs where possible.6,7 However, because Medicaid rebates are higher on brand-name drugs than generics, net costs may actually be lower for brand-name drugs in Medicaid, leading some states to implement “brand over generic” programs. This is especially the case at the initial entrance of a generic equivalent into the market, when a state may still have supplemental rebate agreements and other large rebates that offset the price of the brand drug. Estimates suggest these programs can lead to substantial savings. 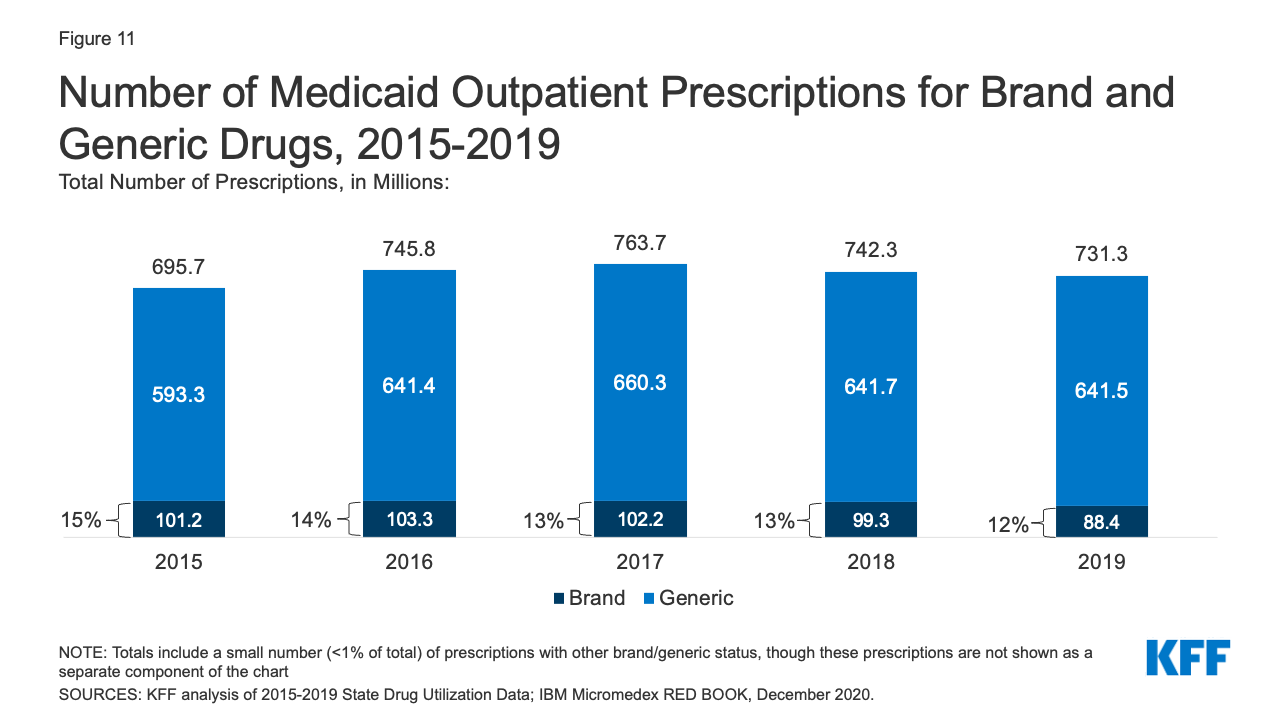 Generic drugs accounted for the vast majority of Medicaid outpatient prescriptions while brand drugs accounted for the vast majority of Medicaid spending before rebates during the period. The increase in number of Medicaid prescriptions from 2015 to 2017 was driven by the growing number of generic drugs, while the number of brand drug prescriptions over this period changed very little. The number of both brand and generic prescriptions fell from 2017 to 2019, but brand prescriptions decreased more quickly (14% drop) compared generic prescriptions (3% drop) (Figure 11). However, brand drugs consistently accounted for a relatively large share of Medicaid spending before rebates from 2015 through 2019, and this share increased slightly over time (from 74% to 79%) (Figure 12). The growth in brand spending despite decreases in both brand and generic prescriptions reflects national trends caused by increasing list prices for brand drugs and the launch of expensive new drugs during the period. Gross brand spending increased 8% from 2018 to 2019, likely driven by the launch of high cost, new specialty brand drugs like Biktarvy, Hemlibra, and Epidiolex. Other analysis shows that while other drugs have lost exclusivity over this period, the savings due to introduction of competition for those drugs are not keeping pace with the increased spending from the new drugs launching. There have also been price increases for existing brand drugs, like Humira, but Medicaid may be protected from some of these price hikes over time due to the inflationary component of the MDRP. 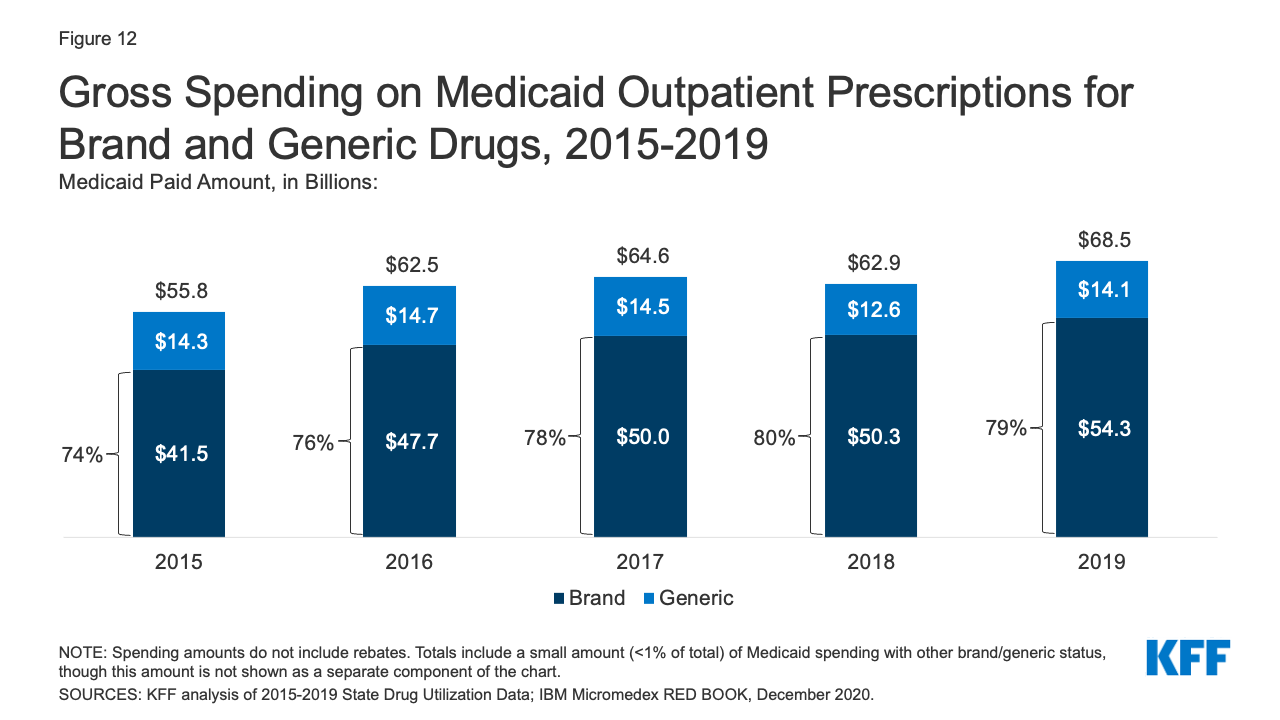 Biologics account for a very small share of prescriptions but a disproportionate share of gross Medicaid drug spending. Biologics are products, such as drugs or vaccines, derived from living organisms with chemical structures more complicated than traditional small molecule drugs. Biosimilars are products that are deemed “highly similar” or “interchangeable” with a referenced biologic. Biologics tend to be priced expensively and face less competition from biosimilars than small molecule brand drugs face from generics. Additionally, while there has been an increase in both biologics and biosimilars approved by the FDA from 2015 to 2019, some FDA approved biosimilars are not due to enter the US market for a few years or have delayed market entry to avoid patent litigation. Across the entire period from 2015-2019, relatively few prescriptions in Medicaid were biologics, but the amount Medicaid spends before rebates on biological products is outsized. While biological products consistently accounted for a little over 1% of Medicaid outpatient prescriptions every year, they accounted for between 15% and 21% of Medicaid spending on prescriptions before rebates over the period (Figure 13). 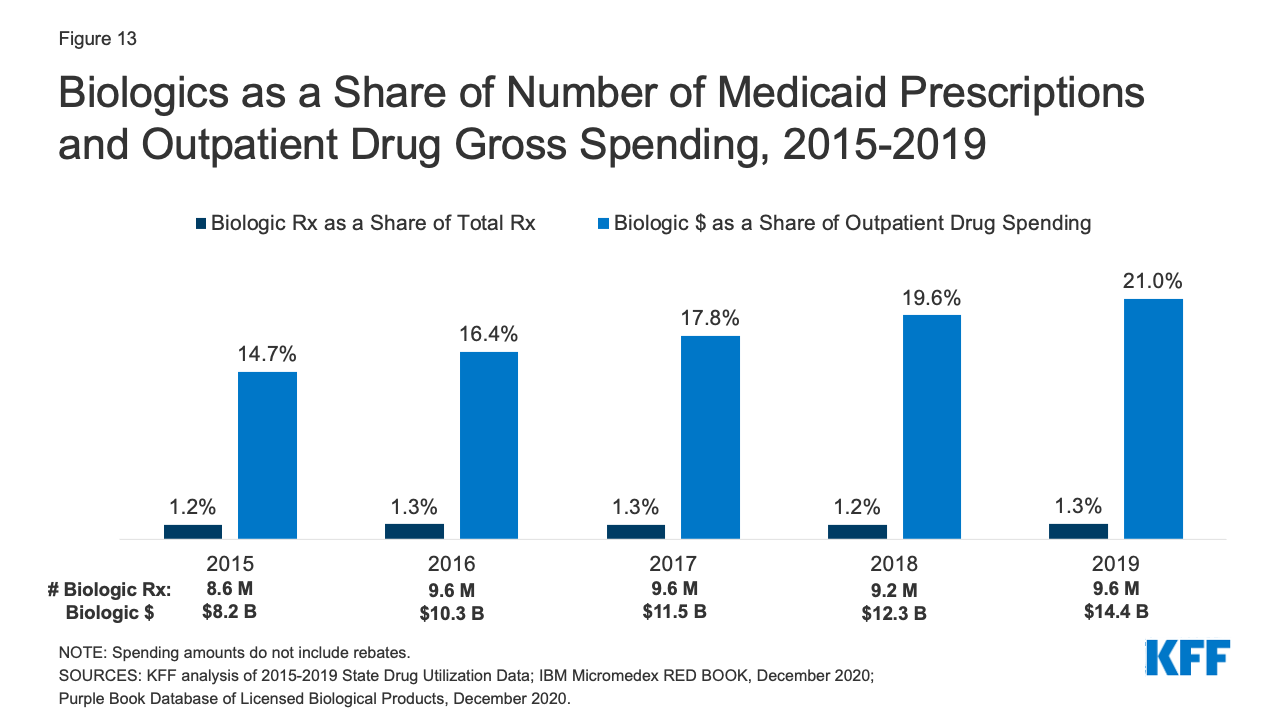 Figure 13: Biologics as a Share of Number of Medicaid Prescriptions and Outpatient Drug Gross Spending, 2015-2019

Medicaid prescription drug policy is likely to remain an issue at both the federal and state levels due to budgetary constraints and the entry of new, high-cost drugs. States remain concerned about the entry of new high-cost drugs to the market and report that developing strategies and policies to address these drugs is a top priority. There has also been recent policy discussion about strategies at the federal level to address the cost of new therapies through the FDA accelerated approval pathway as well as gene and cell therapies.

Congress may take action to address drug prices in both Medicaid and in the health system more broadly. Recent COVID-19 relief legislation includes a provision that lifts the Medicaid rebate cap (currently set at 100% AMP) beginning in 2024 and is estimated to reduce direct Medicaid spending by $14.5 billion. For drugs with large price increases over time, the Medicaid program may receive rebates from manufacturers that exceed the price of the drug. Reducing drug prices remains a focus of policymakers, particularly for individuals in Medicare and with private insurance, but any policies that change underlying drug prices will also have implications for Medicaid drug spending.

This work was supported in part by Arnold Ventures. We value our funders. KFF maintains full editorial control over all of its policy analysis, polling, and journalism activities.
Appendices