The Centers for Disease Control and Prevention (CDC) recommends that HIV screening be a part of routine medical care for all patients between the ages of 13 and 64.1 These recommendations are intended for all health care providers in both the public and private sectors. This fact sheet assesses coverage of routine HIV screening by state Medicaid fee-for-service programs; Medicaid is the largest source of care and coverage for people with HIV/AIDS in the United States,2 but routine HIV screening for adults is an optional Medicaid benefit which states may choose to cover.

HIV testing is integral to HIV prevention, treatment, and care efforts.1  Knowledge of one’s HIV status is important for preventing the spread of disease and for being linked to medical care and services, which in turn have also been shown to have significant public health benefits.3

Yet the CDC estimates that of the more than 1.1 million people living with HIV/AIDS in the U.S., one in six (16%) do not know they are infected.4  To increase HIV testing rates and knowledge of HIV status, CDC released revised screening guidelines in 2006, recommending, for the first time, routine HIV screening in all health care settings for 13 to 64 year-olds, unless a patient opts out.  Routine HIV screening is broad, population-based screening, in contrast with “medically necessary” testing and testing targeted at those at higher risk.1 The CDC’s routine HIV screening recommendations are intended for health care providers, who are central to their implementation in clinical practice.

A key decision that impacts the implementation of these guidelines came in April 2013, when the U.S. Preventive Services Task Force (USPSTF) gave routine HIV screening of all adolescents and adults, ages 15 to 65, an “A” rating – generally aligning the rating with the CDC’s HIV screening guidelines.  This rating expands the already existing “A” rating for people at increased risk for HIV (such as injection drug users and men who have sex with men), and for all pregnant women.5  The USPSTF ratings are developed by an independent panel of clinicians and scientists, and are important because many private and public insurers link their coverage of preventive services to ones rated “A” or “B” by the USPSTF.  The “A” rating has further implications given the Affordable Care Act (ACA), which requires or incentivizes new private health plans, Medicare, and Medicaid to provide preventive services rated “A” or “B” at no cost to patients.6

One of the most important sources of care and coverage for people with HIV/AIDS in the U.S. is Medicaid, the nation’s principal safety net health insurance program for low-income Americans.  Medicaid is estimated to provide insurance coverage to almost half of all those with HIV who are in regular care.2 In addition, a significant share of those newly diagnosed with HIV have been found to already be covered by Medicaid.7  Thus, Medicaid provides an important potential entry point for assessing implementation of routine HIV screening in health care settings.

While all state Medicaid programs must cover medically necessary HIV testing,8 and the ACA offers states financial incentives to cover certain preventive services (including routine HIV screening) at no cost to consumers, state coverage of routine HIV screening varies because it is an optional benefit under Medicaid.9  Medicaid, while jointly financed by the federal government and the states, is designed and administered by the states within broad federal guidelines.  States can opt to provide routine HIV screening as part of the more general “diagnostic, screening, or preventive” benefit.10

Looking ahead, one of the major vehicles in the ACA to increase health insurance coverage is an expansion of Medicaid to adults with incomes at or below 138% of the federal poverty level (FPL). While the expansion was intended to be implemented in all states, as a result of the Supreme Court decision on the ACA, it is now effectively a state choice. States that implement the expansion will cover most of the newly-eligible adults through Medicaid benchmark plans, referred to as Alternative Benefit Plans (ABPs). These ABPs are required to cover the Essential Health Benefits, which include all preventive services rated A or B by the USPSTF at no cost to the beneficiary. However, the ACA does not require states to cover the Essential Health Benefits under their traditional Medicaid benefit packages; coverage of routine screening for HIV and other preventive services in traditional Medicaid benefit packages will remain optional.

To assess coverage of routine HIV screening, along with coverage of other preventive services for adults in Medicaid fee-for-service programs, the Kaiser Family Foundation’s Commission on Medicaid and the Uninsured surveyed Medicaid officials in all 50 states and the District of Columbia in 2010 and in 2013.11, 12 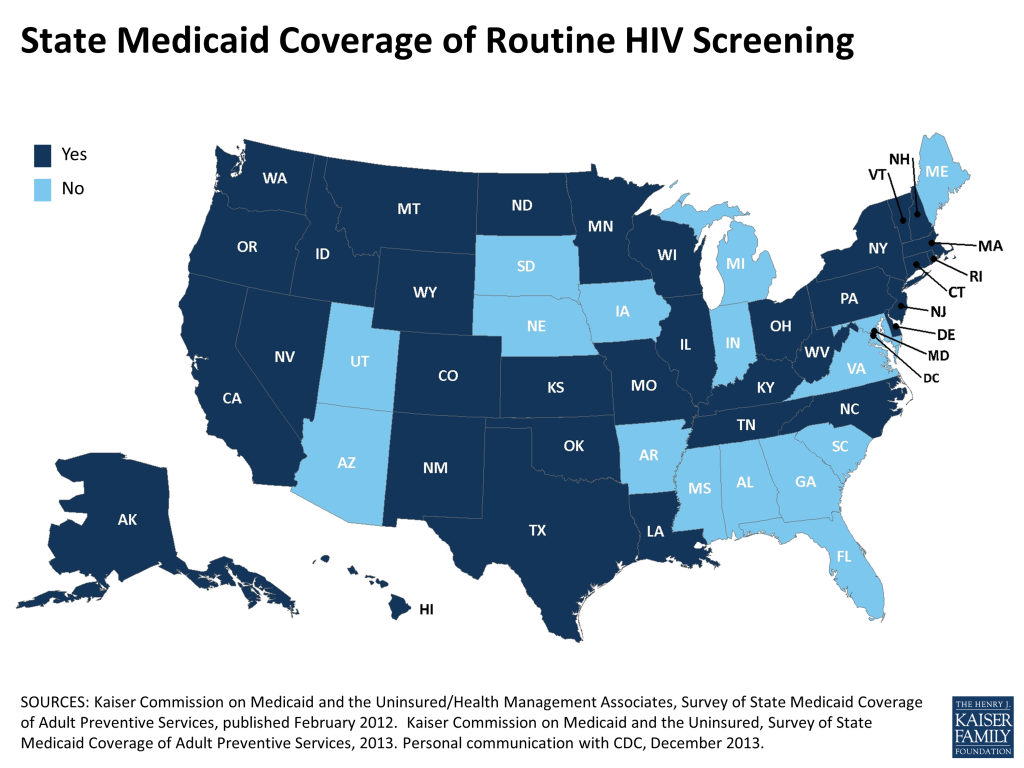 While routine HIV screening is intended to help reach the estimated one in five people infected with HIV who do not yet know it, data on their distribution by state are not currently available.  Instead, data on diagnosed HIV prevalence by state provides a proxy measure of the concentration of overall HIV prevalence across the country.14  By this measure, seven in ten people living with HIV who have been diagnosed (70%) reside in states reporting coverage of routine HIV screening in their Medicaid programs; three in ten (30%) reside in states reporting coverage of medically  necessary testing only.15

Among Medicaid beneficiaries with HIV specifically, the distribution holds a similar pattern, with about seven in ten enrollees having the benefit of routine screening. Seventy-two percent of Medicaid beneficiaries with HIV reside in states reporting coverage of routine HIV screening under Medicaid; three in ten (29%) reside in states that cover medically necessary testing only.16

Medicaid, as the largest source of coverage for people with HIV/AIDS in the U.S., is an important entry point for assessing implementation of CDC and USPSTF routine HIV screening recommendations. We found that more than two thirds of all states now cover routine HIV screening and there has been an overall trend toward expanding coverage to include routine screening in the last few years.  There is variation in coverage by region, as well as of those living with HIV and of Medicaid beneficiaries with HIV.