Insurance Coverage and Viral Suppression Among People with HIV, 2018

Health insurance coverage and access to care improve health outcomes, including viral suppression, for people with HIV in the United States. Our previous work, based on analysis of nationally representative data from the Centers for Disease Control (CDC) and Prevention’s Medical Monitoring Project (MMP), demonstrated that implementation of the Affordable Care Act’s (ACA) 2014 coverage provisions increased insurance coverage among adults with HIV. In this analysis, using the same data source and building on recent work, we provide a detailed analysis of coverage in 2018, including by state Medicaid expansion status, race/ethnicity, gender, and income.  For the first time, we include data on coverage among people with HIV by place of birth and sexual orientation.

Our earlier research found that prior to the ACA’s major coverage reforms, approximately 18% of people with HIV were uninsured in 2012. While not directly comparable to the current dataset, the share of people with HIV without insurance was just 11% in 2018, suggesting a substantial decline in uninsurance rates among this population. Indeed, implementation of the ACA resulted in a significant increase in coverage and since that time, rates have remained stable (Fig. 1). 1 In 2018, Medicaid was the single largest source of insurance coverage for adults with HIV, covering 4 in 10. Private insurance was the second largest source of coverage, reaching more than one-third of the population (35%) and as noted, just 1 in 10 (11%) were uninsured (Fig. 2), on par with the general population). 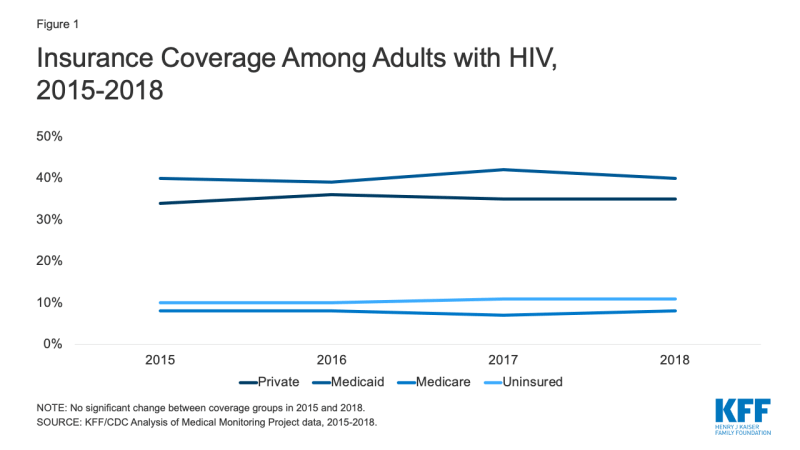 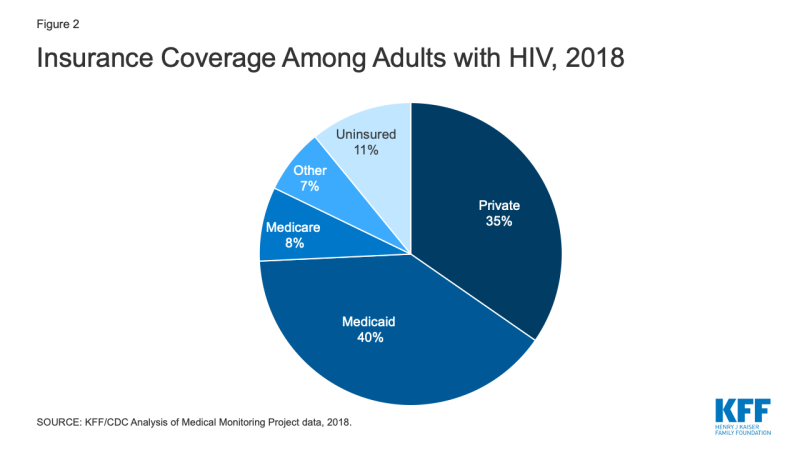 Coverage patterns among adults with HIV differ from those of the general population (Fig. 3). Medicaid plays a much larger role (40% v. 15%) and private insurance a smaller role (35% v 56%) among those with HIV compared to the general population. In addition, people with HIV are less likely to have private coverage through an employer (26% v. 49%) and more likely to have it through the individual market, including the ACA’s marketplaces (7% v. 4%) (not shown). As noted above, uninsurance rates are comparable between the two populations (about 10%). 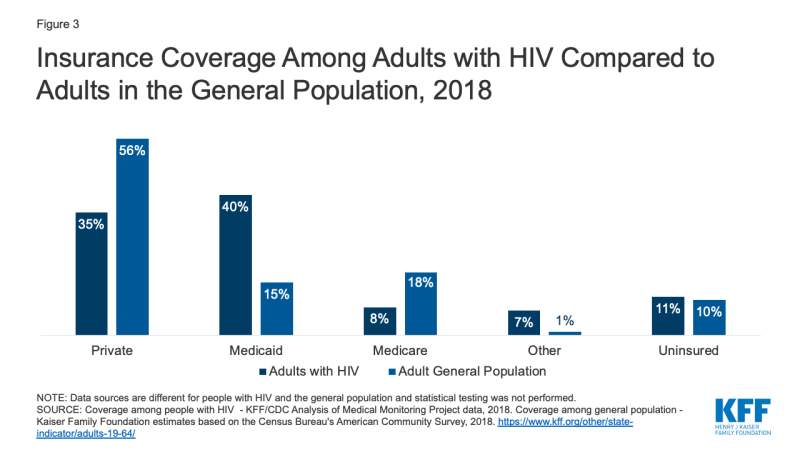 Figure 3: Insurance Coverage Among Adults with HIV Compared to Adults in the General Population, 2018 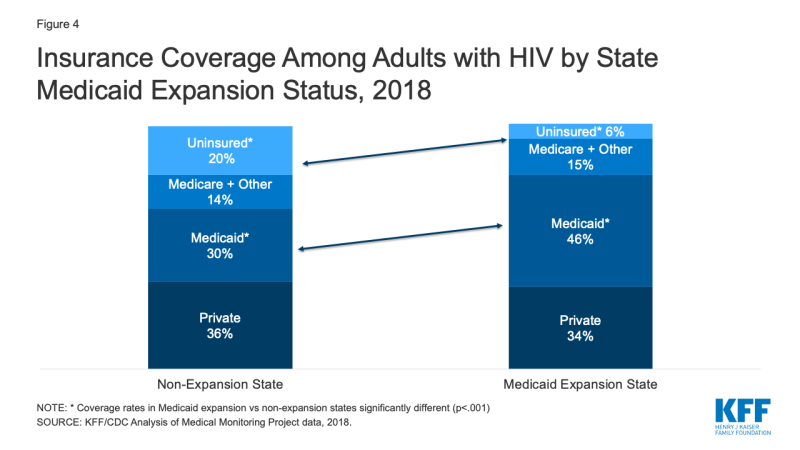 We observed coverage differences among adults with HIV by a range of demographic indicators, including, race/ethnicity, gender, income, and, for the first time, place of birth and sexual orientation.

Race/ethnicity: White adults with HIV were more likely than Blacks and Hispanics to have private insurance (45% v. 31% and 28%, respectively) and Medicare (11% v. 7% and 5%, respectively) and less likely than Blacks to have Medicaid (35% v 45%). Notably, Blacks and Hispanics were more than three times as likely as Whites to be uninsured (14% and 15%, respectively vs. 4%). These trends reflect in part, disparities seen in coverage by race/ethnicity nationwide, including that people of color are more likely than White to live in non-expansion states, (Fig. 5) 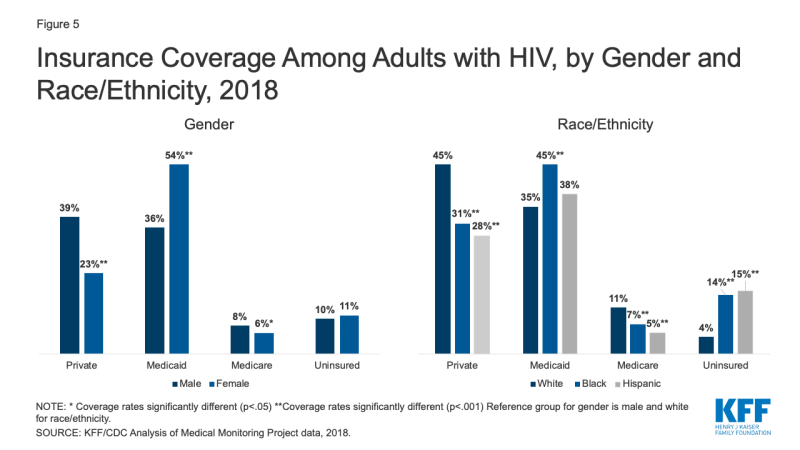 Figure 5: Insurance Coverage Among Adults with HIV, by Gender and Race/Ethnicity, 2018

Income. Those with household incomes <100% of the federal poverty level (FPL) ($12,140 for an individual in 2018) were significantly less likely to have private coverage compared to all other income groups and most likely to have Medicaid coverage. This likely reflects the association between income and access to employment benefits and marketplace subsidies. The percentage of people with HIV with private healthcare coverage increased, and Medicaid coverage decreased, with increasing household income. (Fig. 6) 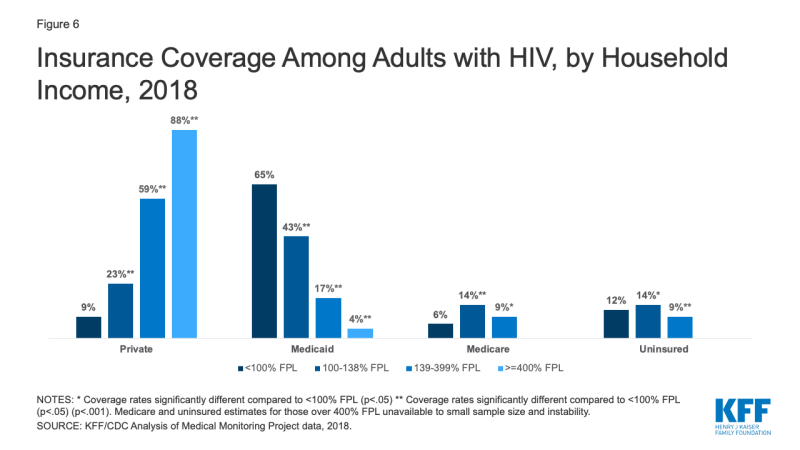 Figure 6: Insurance Coverage Among Adults with HIV, by Household Income, 2018

U.S. Born. Nine in 10 adults (86%) with HIV in the U.S. were born in country whereas 15% were born abroad.2 These individuals were significantly less likely to have the publicly funded health coverage sources, Medicaid and Medicare, than those born in the U.S (28% v. 42% and 4% v. 8%, respectively), potentially reflecting citizenship and residency requirements in public coverage. This group was also three times as likely to be uninsured compared to U.S. born counterparts (24% v. 8%). (Fig. 7) 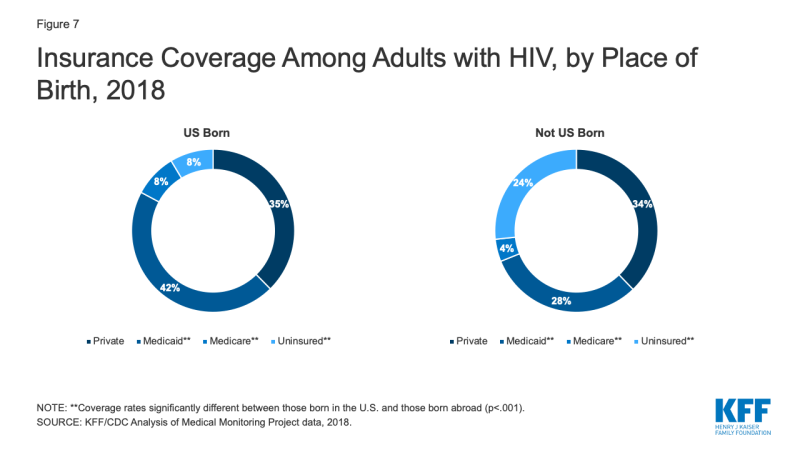 Figure 7: Insurance Coverage Among Adults with HIV, by Place of Birth, 2018 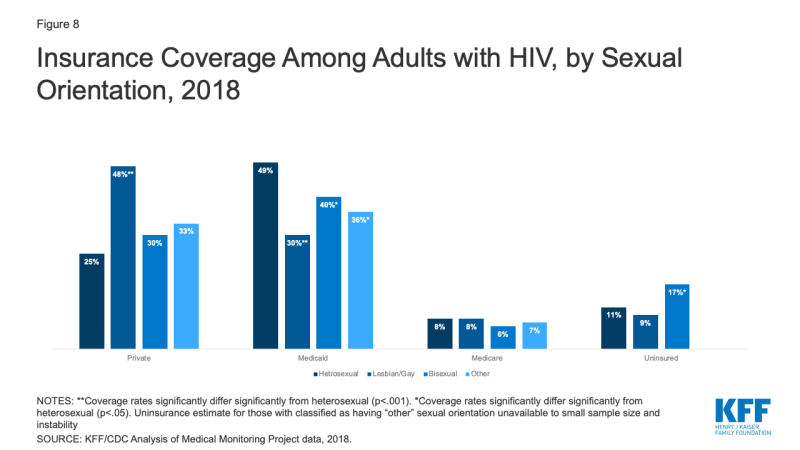 Figure 8: Insurance Coverage Among Adults with HIV, by Sexual Orientation, 2018

The federal Ryan White HIV/AIDS Program provides outpatient HIV care, treatment, and support services to people with HIV who are underinsured and uninsured. In 2018, nearly half (46%) of adults with HIV received support from the program. The program provides assistance to those with and without coverage but plays an especially significant role for the uninsured, 82% of whom receive program services. Those who are uninsured may receive direct medical care and prescription drugs through the program, as well as support services. Ryan White also plays a meaningful role for those with insurance coverage, addressing gaps in coverage (e.g. providing support services not included in traditional coverage) and assisting with costs associated with insurance (e.g. insurance premiums and out-of-pocket costs related to HIV medication). Sixty-two percent (62%) of those with Medicare receive Ryan White support. Among those with private insurance, almost 4 in 10 (38%) receive assistance through the program. This share was significantly higher among those with marketplace coverage (56%) compared to employer-based coverage (32%), potentially reflecting the role Ryan White plays in helping clients purchase individual insurance coverage. It could also reflect higher cost-sharing for many in individual insurance (Fig. 9). 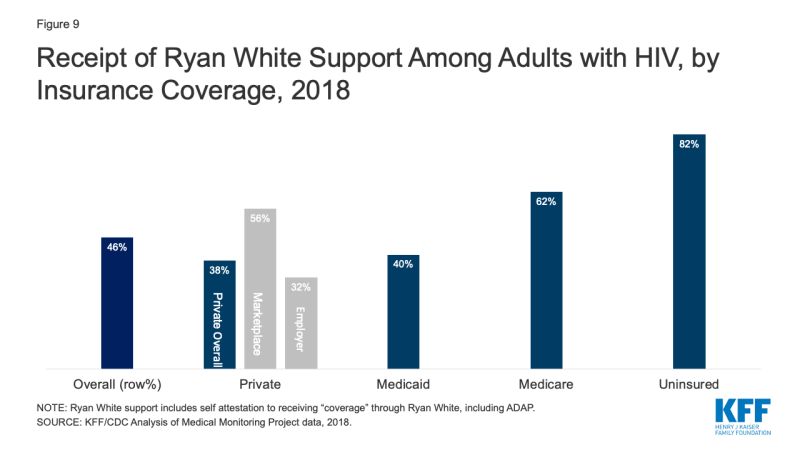 Figure 9: Receipt of Ryan White Support Among Adults with HIV, by Insurance Coverage, 2018

Viral suppression (defined as having an undetectable viral load at the time of last available laboratory data) is a critical health indicator, affording optimal health outcomes at the individual level and, because when an individual is virally suppressed they cannot transmit HIV, significant public health benefit. However, because viral suppression can change over time, especially depending on treatment adherence, it is particularly important to look at sustained viral suppression (defined as having an undetectable viral load over all tests in the preceding 12 months), a stronger indicator of long-term adherence antiretroviral treatment and its associated preventive benefits.  In 2018, 68% of people with HIV were virally suppressed at last test and 62% had sustained viral suppression, the same share as in 2015. (Fig. 10) 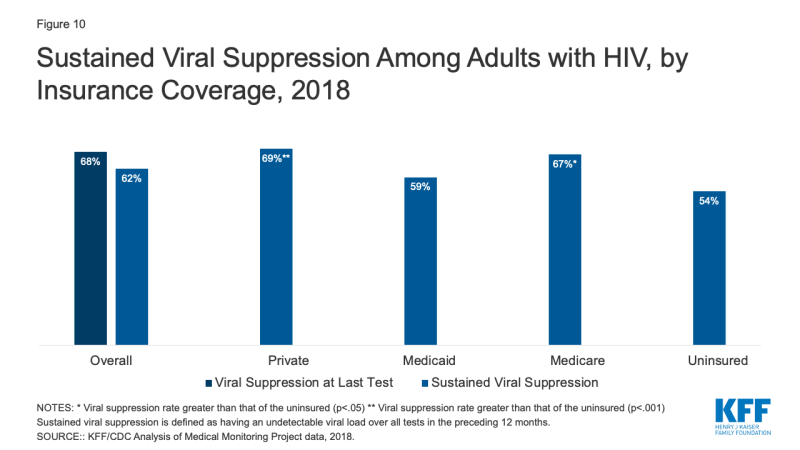 Ryan White support appears to make a significant difference in achieving sustained viral suppression. Overall, those with Ryan White support were significantly more likely to have sustained viral suppression compared to those without (68% v. 58%) and this pattern was observed across all coverage types, and was especially apparent among the uninsured (60% v 26%).  (Fig. 11) 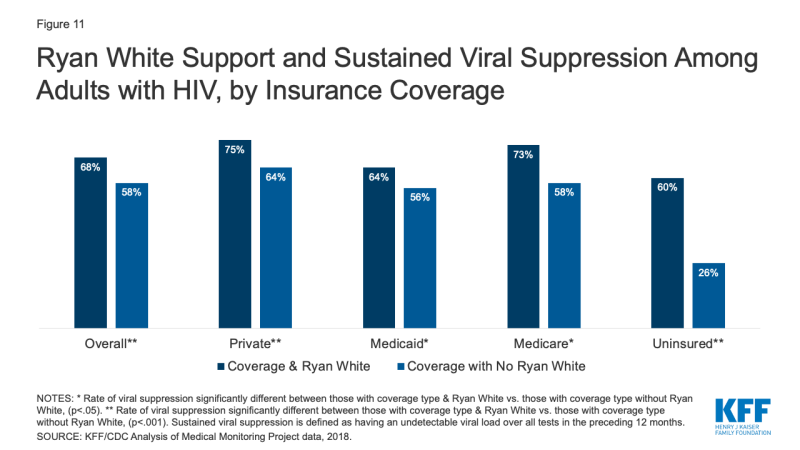 In 2018, the uninsurance rate among people with HIV was similar to that of the public at large. Medicaid represented the single largest source of coverage for people with HIV, particularly in Medicaid expansion states, followed closely by private insurance. We observed significant differences in coverage by gender, income, and race/ethnicity, with notable disparities related to rates of uninsurance by race/ethnicity. We also provide the first national data on adults with HIV and insurance coverage by place of birth and sexual orientation. The Ryan White Program is a significant source of care, treatment, and support for people with HIV, especially for the uninsured but also for a substantial share of those with coverage. Certain insurance sources and support from Ryan White were associated with greater rates of sustained viral suppression, a crucial indicator of optimizing the individual and public health benefits associated with antiretroviral treatment.

The ACA has made a significant difference in expanding insurance coverage for people with HIV, yet its future continues to be contested terrain. On the one hand, the Trump Administration is seeking to invalidate the law before the Supreme Court, while on the other hand, states, including states with leadership that has opposed the ACA, continue to adopt Medicaid expansion through voter led ballot initiatives; as of September 2020, 39 states (including D.C.) have adopted Medicaid expansion. In addition, health care could be a major issue in the 2020 elections with candidates President Trump and Democratic nominee Joe Biden holding deeply diverging views on the issue. Their different policy perspectives and positions stand to significantly impact coverage, and likely care outcomes, for people with HIV, as well as the success of the administration’s “Ending the HIV Epidemic” initiative.

The authors wish to thank Dr. Sharoda Dasgupta, Dr. Linda Beer, and Dr. Yunfeng Tie of the CDC, who were instrumental in this work in providing access to data, guidance, and conducting statistical analysis.