This data note looks at national and state-by-state Medicaid and CHIP enrollment data through February 2021, as states were still in the early stages of the COVID-19 vaccine rollout and were experiencing some economic improvements compared to earlier in the pandemic. After declines in enrollment from 2017 through 2019, total Medicaid/CHIP enrollment grew to 81.0 million in February 2021, an increase of 9.8 million from enrollment in February 2020 (13.8%), right before the pandemic and when enrollment began to steadily increase (Figure 1).1 Increases in enrollment reflect changes in the economy (as more people experience income and job loss and become eligible and enroll in Medicaid and CHIP coverage) and provisions in the Families First Coronavirus Response Act (FFCRA) that require states to ensure continuous coverage to current Medicaid enrollees to access a temporary increase in the Medicaid match rates. While enrollment has increased for 12 consecutive months, the monthly increases appear to be slowing compared to April through August 2020, when monthly increases were the largest. However, February 2021 enrollment data are still preliminary and will likely be revised upward in future enrollment reports. 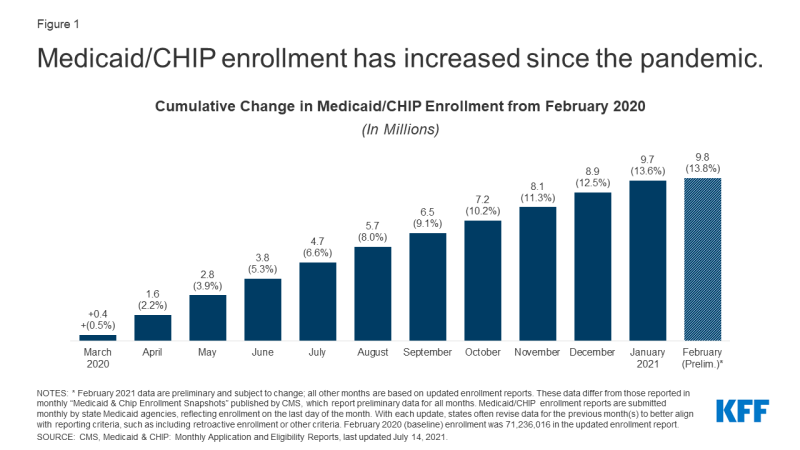 Figure 1: Medicaid/CHIP enrollment has increased since the pandemic.

The information in this data note is based on KFF analysis of the Centers for Medicare and Medicaid Services (CMS) Performance Indicator Project Data. Medicaid/CHIP enrollment data are submitted monthly by state Medicaid agencies and, with each monthly update, states often revise the previous months’ enrollment to include retroactive enrollment and to better align with reporting criteria. Except for the latest month’s enrollment (February 2021), this brief reports data from the updated enrollment reports for all other months to reflect the most current enrollment data possible. However, the data presented in this brief will differ from those presented in monthly Medicaid and CHIP Enrollment Snapshots published by CMS, which use exclusively preliminary enrollment reports for all months.

Medicaid/CHIP enrollment increased following the implementation of the Affordable Care Act (ACA) but was declining in the two years prior to the pandemic. Following the implementation of the ACA Medicaid expansion to low-income adults in 2014, there were large increases in Medicaid and CHIP enrollment across states that followed steady growth in coverage of children over the past decade. These increases reflected enrollment among newly eligible adults in states that implemented the expansion as well as enrollment among previously eligible adults and children due to enhanced outreach and enrollment efforts and updated enrollment procedures tied to the ACA. This trend began reversing when enrollment started to decline in 2018 and continued to decline in 2019. Total enrollment fell from 73.4 million in December 2017 to 71.2 million in December 2019, a decline of 2.2 million people or 3%. Month-to-month enrollment declines slowed but continued until February 2020. The declines in enrollment, in part, reflected a robust economy, but experiences in some states suggested that they may have also reflected enrollment losses among people who were still eligible for coverage due challenges completing enrollment or renewal processes.

Data show that Medicaid/CHIP enrollment is increasing amid the coronavirus pandemic as data from February 2020 to February 2021 show that enrollment increased by 9.8 million or 13.8%. Recent increases could reflect new enrollment related to changes in the economy and job loss, as well as eligibility and enrollment requirements included in the Families First Coronavirus Response Act (FFCRA), also known as maintenance of eligibility (MOE) requirements. Under the FFCRA, to be eligible for enhanced federal Medicaid matching funds, states must ensure continuous coverage for those enrolled in Medicaid as of March 18, 2020 and cannot make eligibility and enrollment more restrictive than policies in place as of January 2020. Over this period, all states experienced Medicaid/CHIP enrollment growth ranging from 8.6% to 27.2% (Figure 2). 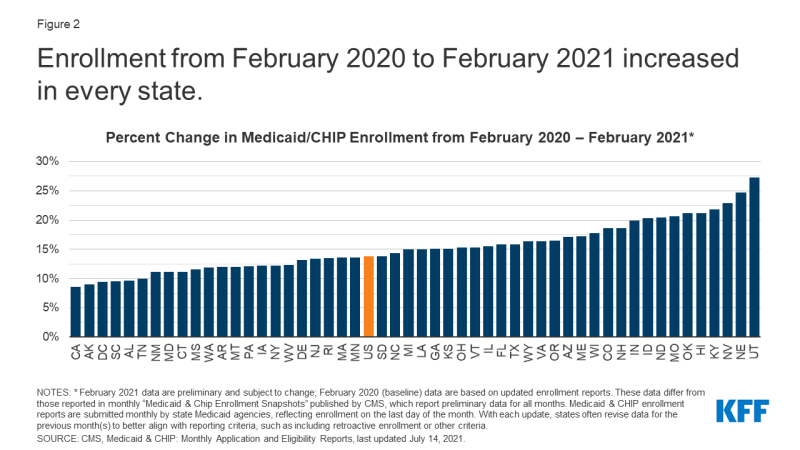 Reflecting economic changes and provision in FFCRA, adult enrollment in Medicaid/CHIP has increased rapidly during the pandemic, growing by 18.5% from February 2020 through February 2021 enrollment reports. This growth amounts to an additional 6.3 million adults in the 49 states and DC that report adult/child monthly enrollment (Arizona does not report children or adults separately). Additionally, three states began newly enrolling expansion adults in 2020 (Utah and Idaho in January, Nebraska in October), which may also be contributing to increased adult enrollment. Child enrollment grew as well, but at a slower pace: 9.1% or 3.2 million enrollees in the same period. Still, every state reporting these data saw an increase in child Medicaid/CHIP enrollment during this time period, despite declines in CHIP enrollment in some states (as discussed above).