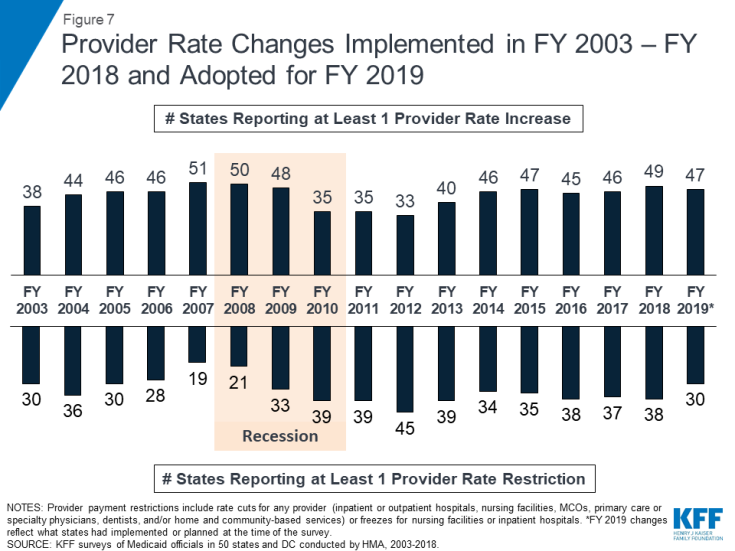 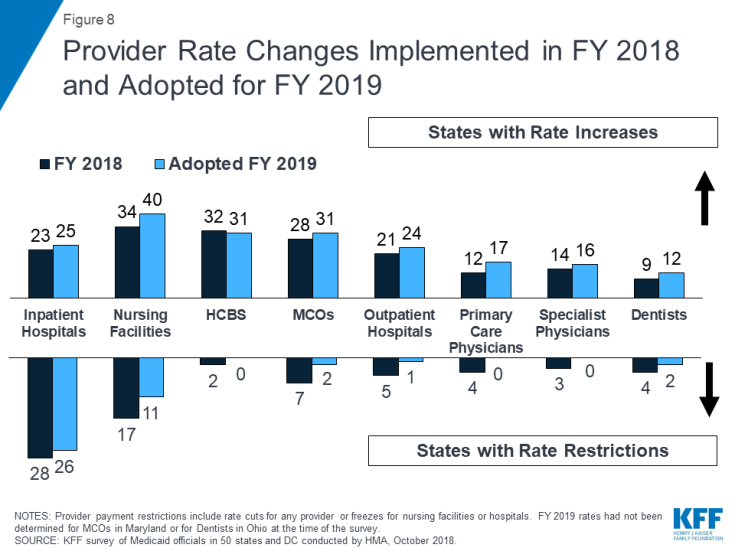 State authority to adjust capitation payments for MCOs is limited by the federal requirement that states pay actuarially sound rates. In FY 2018 and FY 2019, the majority of the 39 states with Medicaid MCOs either implemented or planned increases in MCO rates. While seven states reported MCO rate cuts in FY 2018, only two states plan to cut MCO rates in FY 2019.2

Over half of MCO states require MCOs to change provider payment rates in accordance with FFS payment rate changes. In many states, MCOs make most of the Medicaid payments to providers. This year’s survey asked states to report whether they require their MCOs to make changes to their provider payments that follow percent or level changes in FFS rates. Of the 39 states with MCOs, 18 states indicated that they had no such requirement, 19 states have such a requirement for some provider types, and two states (Louisiana and Mississippi) required MCOs to make these changes for all types of Medicaid providers.

Provider taxes are an integral source of Medicaid financing. In this year’s survey, states reported continuing or increased reliance on provider taxes and fees to fund a portion of the non-federal share of Medicaid costs in FY 2018 and FY 2019. At the beginning of FY 2003, 21 states had at least one provider tax in place. Over the next decade, a majority of states imposed new taxes or fees and increased existing tax rates and fees to raise revenue to support Medicaid. By FY 2013, all but one state (Alaska) had at least one provider tax or fee in place.3 In FY 2018, 36 states, including DC, had three or more provider taxes in place (Figure 9). 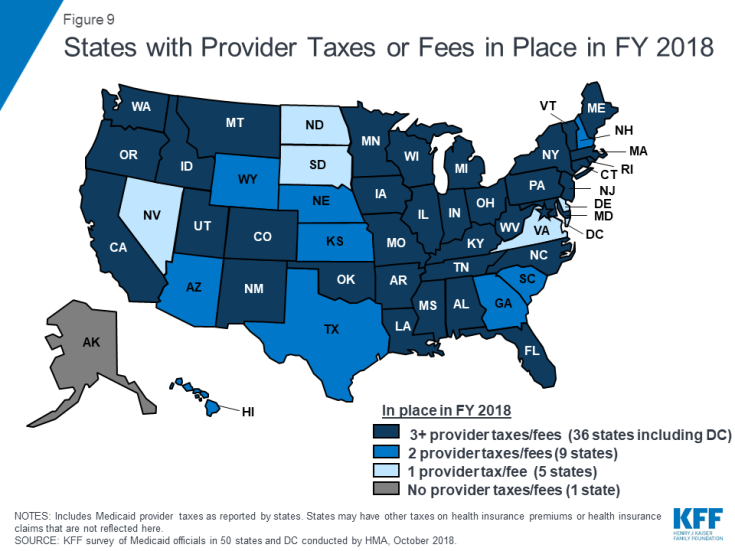 Figure 9: States with Provider Taxes or Fees in Place in FY 2018

Very few states made or are making any changes to their provider tax structure in FY 2018 or FY 2019. The most common Medicaid provider taxes in place in FY 2018 were taxes on nursing facilities (44 states), followed by taxes on hospitals (42 states) and taxes on intermediate care facilities for people with intellectual disabilities (36 states) (Table 13). Two states reported plans to add new taxes in FY 2019. Virginia is implementing a new hospital tax to fund the state’s share of Medicaid expansion costs, and California is implementing a new tax on Ground Emergency Medical Transportation (GEMT or ambulance).

Eleven states report planned increases to one or more provider taxes in FY 2019, while six states report provider tax decreases. In addition, 29 states reported at least one provider tax that is at or above 5.5% of net patient revenues, which is close to the maximum federal safe harbor threshold of 6%. Federal action to lower that threshold, as has been proposed in the past, would therefore have financial implications for many states.

Twelve states report that they have taxes on MCOs as of FY 2018. Federal Medicaid law was changed4 effective July 1, 2009 to restrict the use of Medicaid provider taxes on managed care organizations such as HMOs. Prior to that date, states could apply a provider tax to Medicaid HMOs that did not apply to MCOs more broadly and could use that revenue to match Medicaid federal funds. In recent years, several states have implemented new MCO taxes that tax member months rather than premiums and that meet the federal statistical requirements for broad-based and uniform taxes. As a result, the number of MCO taxes has increased in recent years. In addition to the 12 states reporting MCO taxes, some states have implemented taxes on health insurers more broadly that generate revenue for their Medicaid programs.

An increasingly common provider tax is a tax on Ground Emergency Medical Transportation, or an ambulance tax. As noted above, California is implementing such a tax in FY 2019, bringing the number of states with an ambulance tax to eight states.