Medicaid covers one in five Americans, accounts for one in six dollars spent on health care in the United States, and makes up more than half of all spending on long-term services and supports. Medicaid is a state budget driver as well as the largest source of federal revenue to states. The program is constantly evolving in response to federal policy changes, the economy, and state budget and policy priorities. As states began state fiscal year (FY) 2019, the economy in most states was stable or improving and 36 states faced upcoming gubernatorial elections. With fewer budget pressures, a number of states reported expansions or enhancements to provider rates and benefits (including expansions for community-based long-term services and supports (LTSS) and behavioral health services). In addition, ballot initiatives in three states could result in adoption of the ACA Medicaid expansion. States also continue to focus on improvements in outcomes and value through delivery system changes and managed care requirements. In response to policy directions promoted by the Trump administration, an increasing number of states are pursuing demonstration waivers that include work requirements and the elimination or restriction of retroactive eligibility — policies that could result in enrollment declines (ES 1). 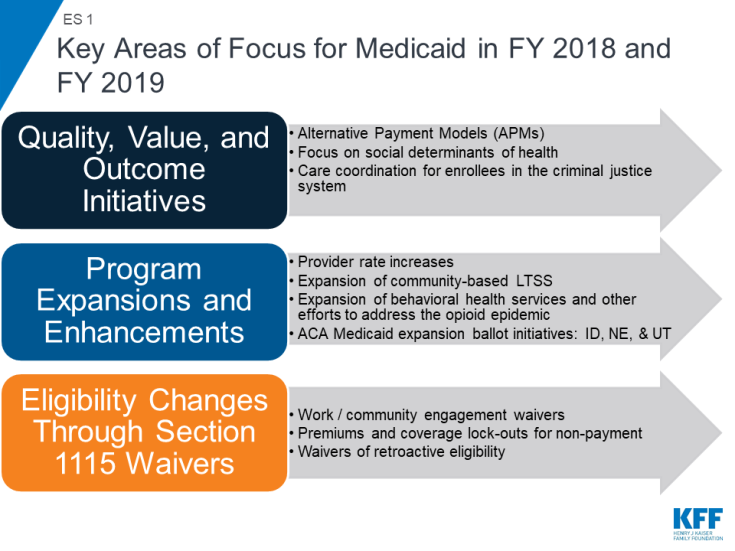 This report provides an in-depth examination of the changes taking place in Medicaid programs across the country. The findings are drawn from the 18th annual budget survey of Medicaid officials in all 50 states and the District of Columbia conducted by the Kaiser Family Foundation (KFF) and Health Management Associates (HMA), in collaboration with the National Association of Medicaid Directors (NAMD). This report highlights certain policies in place in state Medicaid programs in FY 2018 and policy changes implemented or planned for FY 2019. The District of Columbia is counted as a state for the purposes of this report. Given differences in the financing structure of their programs, the U.S. territories were not included in this analysis but a separate survey was fielded and results will be released in another report. Key findings include the following:

A growing number of states are implementing or planning Section 1115 waivers with policies that have or could result in enrollment declines, while three states (Idaho, Nebraska, and Utah) could adopt the ACA Medicaid expansion through ballot initiatives. Policies that have or are likely to result in enrollment declines are counted as restrictions in this report. Eligibility restrictions implemented in FY 2018 (by six states) or planned for implementation in FY 2019 (in 11 states) generally target broad Medicaid populations, including parents/caretakers and expansion adults. These changes are primarily occurring through Section 1115 waiver demonstration authority because they are not allowed under current law. Restrictions for FY 2018 or FY 2019 include eight states implementing or planning to implement work or community engagement requirements as a condition of Medicaid eligibility, eight states eliminating or restricting retroactive eligibility, and three states implementing or proposing lock-out periods for non-payment of premiums, failure to complete redetermination, and/or failure to timely report changes affecting eligibility. In contrast, with the exception of planned implementation of the ACA Medicaid expansion in Maine and Virginia in FY 2019, most Medicaid eligibility expansions for FY 2018 or FY 2019 are narrow and targeted to a limited number of beneficiaries. Most states are working with corrections agencies and with local jails to facilitate Medicaid enrollment prior to release and the majority of states do not terminate Medicaid coverage for enrollees who become incarcerated.

What to Watch: Three states have proposals to adopt the Medicaid expansion on the November 2018 ballot (Idaho, Nebraska, and Utah) and many states have Section 1115 waivers pending or under development that could be implemented after FY 2019 and would impact eligibility, if approved by CMS.

Risk-based managed care continues to be the predominant delivery system for Medicaid services, and states are focused on implementing alternative payment models and improving quality within MCOs. Among the 39 states with comprehensive risk-based managed care organizations (MCOs), 33 states reported that 75% or more of their Medicaid beneficiaries were enrolled in MCOs as of July 1, 2018. Although many states still carve-out behavioral health services from MCO contracts, movement to carve-in these services continues. Nearly all states have managed care quality initiatives in place such as pay for performance or capitation withholds and an increasing number of states (23 in FY 2018) set a target percentage of MCO provider payments that must be in alternative payment models (APMs).

What to Watch: Alaska and Arkansas reported plans to implement an MCO program for the first time in FY 2019. States continue to focus on improving value, quality, and outcomes through managed care arrangements. CMS has announced plans to release revised Medicaid managed care regulations for public comment later this fall.

States are working to address social determinants of health both within and outside of MCO contract requirements. Medicaid programs have been expanding their use of other service delivery and payment reform models to achieve better outcomes and lower costs. Forty-three states had one or more delivery system or payment reform initiatives in place in FY 2018 (e.g., patient-centered medical homes (PCMHs), ACA Health Homes, accountable care organizations (ACOs), episode of care payments, or delivery system reform incentive programs (DSRIPs)).

What to Watch: About one-third of the states reported a wide variety of initiatives implemented in FY 2018 or planned for FY 2019 that address the social determinants of health (SDOH) outside of managed care and more than one-third reported collecting or plans to collect SDOH data from various sources including screenings and assessments, data collected for other state programs, claims data, beneficiary surveys, or as part of a care management or home visiting program.

Nearly all states in FY 2018 (46 states) and FY 2019 (48 states) are employing one or more strategies to expand the number of people served in home and community-based settings. Almost all states continue to report using home and community-based services (HCBS) waivers and/or state plan options (i.e., 1915(c), 1115, 1915(i), and 1915(k)) to serve more individuals in the community. As of July 1, 2018, 24 states covered LTSS through one or more capitated managed care arrangements (“MLTSS”). Pennsylvania introduced MLTSS in FY 2018, with a plan to phase-in statewide over time. Virginia ended its Financial Alignment Demonstration (FAD) but adopted statewide MLTSS for a broader population, including dual eligible individuals. To address challenges in finding and retaining LTSS direct care workers, a number of states reported wage increases for these workers in FY 2018 and/or FY 2019.

In FY 2018 and FY 2019, with favorable economic conditions in most states, more states made or are planning provider rate increases compared to restrictions, and there is little new activity around provider taxes. More rate increases relative to decreases holds true across major provider types, with the exception of inpatient hospitals (where inpatient hospital rate “restrictions” are primarily rate freezes that are counted as restrictions in this report). About half of MCO states (21 of 39) require MCO payments to some or all types of providers to follow percent or level changes in fee-for-service (FFS) rates. Twenty-seven states require minimum MCO payments (rate floors) for some provider types, and five states reported minimum MCO payment requirements for all types of Medicaid providers. All states except Alaska rely on provider taxes and fees to fund a portion of the non-federal share of the costs of Medicaid. Two states indicated plans for new provider taxes in FY 2019, including Virginia that plans a new hospital provider tax to finance state costs of the newly adopted Medicaid expansion.

What to Watch: As enrollees are predominantly in MCOs, the significance of changes in FFS payment rates is difficult to assess without a better understanding of how changes in FFS rates affect changes in MCO rates paid to providers. Twenty-nine states have at least one provider tax that is at or above 5.5% of net patient revenues (close to the maximum safe harbor threshold of 6%). Therefore, federal action to lower that threshold as proposed in the past would have financial implications for many states.

Positive economic conditions and state priorities resulted in a number of states increasing benefits, particularly for mental health and substance use disorder (SUD) treatment. A total of 19 states expanded or enhanced covered benefits in FY 2018 and 24 states plan to add or enhance benefits in FY 2019. The most common benefit enhancements reported were for mental health/SUD services (including waiver of the IMD exclusion). A handful of states also reported expansions related to dental services, telemonitoring/telehealth, physical or occupational therapy services, and screening or home visiting services for pregnant women and/or children.

What to Watch: Medicaid continues to play an important role in addressing the opioid epidemic and more broadly in connecting Medicaid beneficiaries to behavioral health services. Going forward, it will be important to follow trends and innovations in how states use Medicaid to increase access to behavioral health services and contain the growth of the opioid and broader SUD crisis.

States continue to focus on cost containment efforts to address rising prescription drug costs and on pharmacy benefit management strategies to address the opioid crisis. Prescription drug costs continue to exert pressure on Medicaid spending, and most states identified specialty and high-cost drugs (individually or in general) as the most significant driver of these costs. Many states reported implementing or making changes to a wide variety of prescription drug cost containment initiatives in FY 2018 or FY 2019, especially initiatives to generate greater rebate revenue and implement new utilization controls (e.g., prior authorization requirements, step therapy, other clinical criteria, or dose optimization). Almost all MCO states generally carve the pharmacy benefit into managed care, and many MCO states are moving to align MCO pharmacy policies with FFS policies. In FY 2018, all states report implementing one or more FFS pharmacy management strategies targeted at opioid harm reduction, including quantity limits, clinical criteria claim system edits, step therapy, other prior authorization requirements, and requirements for Medicaid prescribers to check their states’ Prescription Drug Monitoring Program before prescribing opioids to a Medicaid patient. States continue to increase access to Medication Assisted Treatment (MAT) for opioid use disorder, and 38 states reported coverage of methadone in FY 2018.

Challenges and Priorities FY 2019 and Beyond: Continuing to tackle the opioid epidemic is a key priority for states in FY 2019 and beyond. New federal legislation expected to be signed into law as this report was being finalized, the Substance Use Disorder Prevention that Promotes Opioid Recovery and Treatment for Patients and Communities (SUPPORT) Act, contains a number of provisions related to Medicaid’s role in helping states provide coverage and services to people who need SUD treatment,2 particularly those needing opioid use disorder (OUD) treatment. These provisions include the ability to use federal Medicaid funds for services in “institutions for mental disease” (IMDs) for nonelderly adults for up to 30 days from October 1, 2019 to September 30, 2023; required coverage of all FDA-approved drugs for medication-assisted treatment (MAT) as well as counseling and behavioral therapy services from October 2020 through September 2025; required suspension of Medicaid eligibility for individuals under age 21 or former foster care youth up to age 26 while incarcerated, and restoration of coverage upon release; creation of new demonstrations to help states increase Medicaid SUD provider capacity; and tighter prescription drug oversight.

In addition, states reported a wide variety of other priorities for FY 2019 and beyond, including implementing managed care, payment, and delivery system reform initiatives; undertaking major information technology system procurements and upgrades; pursuing new Section 1115 demonstration waivers, and managing their Medicaid budgets. The trajectory of the economy, the direction of federal policies around Medicaid Section 1115 waivers, and the outcomes of state and federal elections in November 2018 will be factors that shape Medicaid in FY 2019 and beyond.