Medicaid is the nation’s primary payer for long-term services and supports (LTSS), covering a continuum of services ranging from home and community-based services (HCBS) that allow people to live independently in their own homes or in other community settings to institutional care provided in nursing facilities (NFs) and intermediate care facilities for individuals with intellectual disabilities (ICF-IDs). In federal fiscal year 2016, spending on Medicaid LTSS totaled $167 billion, and HCBS represented 57% of these expenditures. In recent years, growth in Medicaid LTSS expenditures has been largely concentrated in HCBS. In 2016, spending on HCBS grew by 10% while spending on institutional LTSS decreased 2%.1 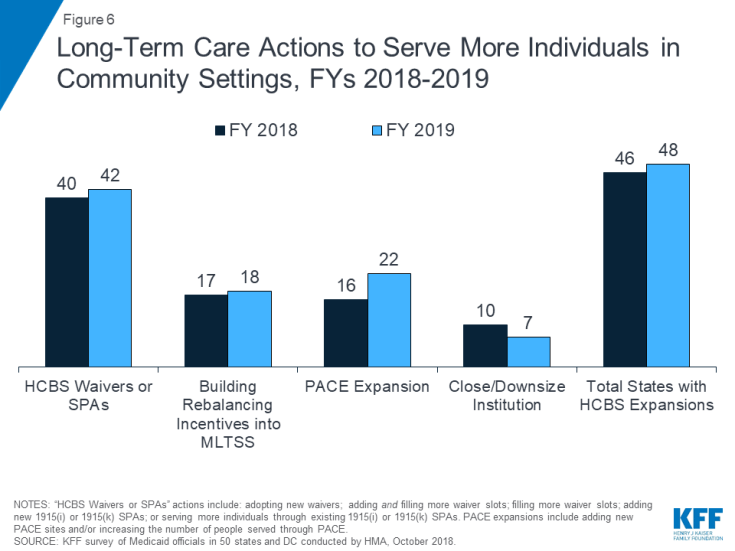 Few states reported actions to reduce or restrict the number of persons served in home and community-based settings in FY 2018 or in FY 2019. In FY 2018, Missouri increased the state’s institutional level of care standard, which affected the eligibility of 445 waiver participants upon reassessment and of over 1,200 waiver applicants on pre-assessment screening. In FY 2019, Michigan may reduce the number of slots available under its MI Choice 1915(c) waiver, which serves seniors and adults with physical disabilities, to reflect available funding.

In this year’s survey, states were also asked to identify the most significant rebalancing challenges they currently face. Among states that responded, the challenges most frequently cited included lack of affordable and accessible housing, gaps in community-based provider capacity (especially in rural areas) and/or direct care workforce shortages, reimbursement challenges (e.g., rising and/or more favorable rates paid to nursing facilities compared to HCBS providers and the need to risk adjust rates as patterns of utilization change), and the expiration of the Money Follows the Person (MFP) program.

Many states are struggling to find sufficient numbers of trained direct care workers to meet the demand for services, including the demand for care in home and community-based settings.2,3 Low wages, few benefits, limited opportunities for career advancement, inadequate training, and high rates of worker injury are factors that also contribute to a workforce shortage and high workforce turnover among paid LTSS direct care workers. The National Center for Health Workforce Analysis projects that demand for direct care workers (including nursing assistants, home health aides, personal care aides, and psychiatric assistants/aides) could grow by 48% between 2015 and 2030, growth that is expected to far exceed the available workforce.4

Three states in FY 2018 (Missouri, Montana, and Oregon) and two states in FY 2019 (DC and Montana) implemented or plan to implement benefit changes that will reduce services under HCBS authorities. States reported targeted restrictions, noting they are being introduced to meet budget neutrality requirements or to reflect changes in available state funding. For example, DC proposes restricting the number of personal care assistance hours available under its Section 1915(i) elderly and persons with physical disabilities state plan option, and Montana is eliminating several services from its Section 1915(c) waivers for individuals with I/DD and those with severe disabling mental illness.5

Money Follows the Person (MFP) is a federal grant program, enacted under the Deficit Reduction Act of 2005 and extended through September 2016 by the Affordable Care Act, which operated in 44 states.6,7 Enhanced federal funding under MFP has supported the transition of over 75,151 individuals from institutional to home and community-based long-term care settings as of December 2016.8 This includes the transition of older adults, individuals with physical disabilities, individuals with mental illness, and individuals with intellectual and developmental disabilities. Although states are developing sustainability plans and completing tasks to close the current MFP grant program, states can use unexpended MFP grant funds through the end of federal FY 2020. However, a few states reported in this year’s survey that they have already exhausted their MFP grants.

Although many states are still developing sustainability plans and making determinations about whether and which services may continue, 30 states identified specific housing-related services that they plan to continue after MFP funding expires. With MFP resources, many states have offered new housing-related services, incorporated housing expertise within the Medicaid program to increase the likelihood of successful community living for persons who need supports, and engaged in strategic activities to assist in identifying and securing housing resources for individuals who choose HCBS.9 In this year’s survey, states were asked to describe housing-related services that will continue (under SPA or waiver authority) after the MFP funding expires.10 The most common services that states expect to continue are transition or relocation services (e.g., case management, coverage for one-time set up costs etc.) and services designed to help individuals locate and maintain housing in the community (e.g., tenancy supports, housing coordination, or supported housing).

About half of MFP-funded states anticipate they will have to discontinue services or administrative activities due to the expiration of MFP funding. States identified a wide range of services and key administrative functions that they expect to discontinue. Examples of services some states may discontinue include intensive transition case management, supportive living services, community transition/housing relocation services, transitional behavioral health supports, and residential environmental modifications. Examples of administrative functions some states may discontinue include statewide housing coordinator, local housing specialists, transition and outreach workers, options counseling, and assistance for individuals to access Section 811 vouchers.

As of July 1, 2018, almost half of states (24 states) covered LTSS through one or more of the following types of capitated managed care arrangements:

Of the 24 states that reported using one or more of these MLTSS models, nine states reported using two models, and one state (New York) reported using all three. Of the states with capitated MLTSS, 17 offered some form of MLTSS plan on a statewide basis for at least some LTSS populations as of July 1, 2018 (Table 10). Almost every MLTSS state includes both institutional and HCBS in the same contractual arrangement, while three states (California, Michigan, and Tennessee) report that this varies by MLTSS arrangement.

Nine states offered an MCO-based FAD (California, Illinois, Massachusetts, Michigan, New York, Ohio, Rhode Island, South Carolina, and Texas) as of July 1, 2018.11 The FAD model involves a three-way contract between an MCO, Medicare, and the state Medicaid program.12,13 Four states have requested an extension of the FAD beyond the current end date of the demonstration at the time of the survey (California, Massachusetts, Ohio, and South Carolina). Virginia closed its FAD at the end of calendar year 2017.

Many states encourage improved coordination and integration of services for the dually eligible population under MCO arrangements outside of the FAD. Massachusetts and Minnesota operate an administrative alignment demonstration (with no financial alignment) for some dually eligible beneficiaries. Nine states14 reported that they require Medicaid-contracting MCOs to be Medicare Dual Eligible Special Needs Plans (D-SNP)15 or Fully Integrated Dual Eligible (FIDE) Special Needs Plans16 in some or all MLTSS models offered in the state, creating an opportunity for improved coordination and integration for beneficiaries. Five states17 reported that they encourage MCOs to be a D-SNP or a FIDE-SNP.

In FY 2018, Pennsylvania implemented MLTSS, with a plan to phase-in statewide over time, and Virginia ended its FAD but adopted statewide MLTSS for a wider population, including dual eligible individuals. Also, one state, Arkansas, reported that it will implement a capitated model of MLTSS for the first time in FY 2019 when it plans to adopt a global payment approach for its new “PASSE” program that provides comprehensive services, including personal care and other HCBS specialty services, for individuals who have the need for an intensive level of community based behavioral health or developmental disabilities services. While the state will exempt individuals who are receiving services under the DD waiver from this model, individuals who are on the waiting list for waiver services will be enrolled, as well as individuals who reside in private ICF-IDs.

In total, two states expanded the geographic reach of MLTSS in FY 2018 and five states are expanding MLTSS geographically in FY 2019 (Exhibit 16). Also, four states added previously excluded populations to MLTSS arrangements in FY 2018 and five states will add previously excluded populations in FY 2019. In all states except for South Carolina (where the state is expanding voluntary enrollment options under its FAD to all Medicare Advantage enrolled seniors statewide), the new populations covered are subject to mandatory enrollment. Rhode Island reported ending its MLTSS contract for individuals who opt out of the FAD, effective September 2018. After that date, individuals who opt out of the FAD will return to Medicaid fee-for-service.

Table 9: Long-Term Care Actions to Serve More Individuals in Community Settings in all 50 States and DC, FY 2018 and FY 2019