Over three-quarters of all state Medicaid programs (43 states) had at least one of the specified delivery system or payment reform models in place in FY 2018, a modest increase over the 40 states reporting at least one model in place in 2017 (Figure 5 and Table 8). This year’s survey asked states whether certain delivery system and payment reform models (defined in the box below) designed to improve health outcomes and constrain cost growth were in place in FY 2018, and whether they planned to adopt or enhance these models in FY 2019. For FY 2019, 19 states (all states with at least one model already in place) reported plans to adopt or expand one or more of the models to reward quality and encourage integrated care. Key initiatives include patient-centered medical homes (PCMHs), ACA Health Homes, and Accountable Care Organizations (ACOs). 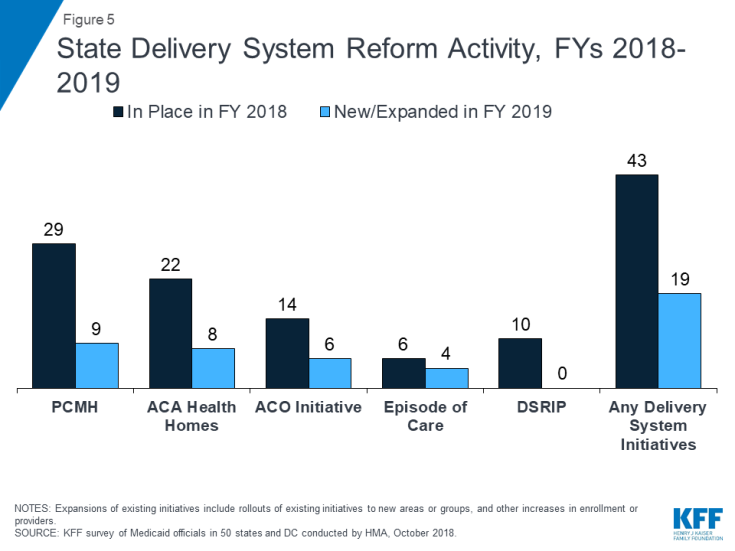 All-payer claims database (APCD) systems are large-scale databases that systematically collect medical claims, pharmacy claims, dental claims (typically, but not always), and eligibility and provider files from both private and public payers. APCDs can be used to help identify areas to focus reform efforts and for other purposes. Seventeen states reported having an APCD in place. Two states (Florida and New York) reported that their APCD would be expanded in FY 2019 and four states (Alaska, Connecticut, Delaware, and Hawaii) reported plans for new APCDs in FY 2019.

In addition to the initiatives discussed above, states mentioned a variety of other delivery system and payment reform initiatives (not counted in the totals for Figure 5 and Table 8), including value-based purchasing initiatives, pay for performance payments, or other incentive arrangements targeted at hospitals, nursing facilities, federally qualified health centers (FQHCs), or other provider types. Examples of other initiatives reported include the following: Alaska is contracting with a health system in FY 2019 to provide case management services on a non-risk basis; Maryland reported on its recently approved Total Cost of Care All-Payer Model (an expansion of the existing all-payer model for hospital services) that will take effect in January 2019; Michigan reported on its Direct Primary Care Pilot that began August 1, 2018 (providing same or next business day primary care appointments for a fixed monthly fee); Rhode Island reported plans to implement a bundled payment for mental health and SUD crisis stabilization services limited to state certified providers; and Wyoming reported on its plans to implement a super-utilizer program targeted at high-cost, high-risk adults.

States with significant populations and/or services delivered outside of contracted MCO arrangements also reported on a wide range of non-MCO quality activities including collection of HEDIS data and other performance measures, conducting beneficiary satisfaction (CAHPS8) surveys, collecting LTSS measures, conducting performance improvement projects, public reporting quality data, and taking steps to expand the use of health information technology and health information exchange. One state (Connecticut) with a comprehensive quality strategy for its managed fee-for-service delivery system approach is highlighted below.

In addition to imposing requirements on MCOs to screen enrollees for social needs and make referrals to other services, many states have initiatives outside of their MCO programs to address one or more of their enrollees’ social determinants of health (SDOH), such as food insecurity, housing, employment, or education. In this year’s survey, states were asked to briefly describe any initiatives implemented in FY 2018 or planned for FY 2019 that address SDOH outside of managed care and/or the housing supports discussed in the “Long-Term Services and Supports” section below.

About one-third of the states described a wide variety of initiatives including case management strategies that include the identification of social factors and appropriate referrals; initiatives that employ community health workers; and participation in the CMS Accountable Health Communities grant program. Other examples of initiatives reported for non-MCO populations include the following: Colorado reported plans to implement multiple SDOH initiatives in FY 2019, mostly through its Regional Accountable Entities that are responsible for collaborating with community-based organizations and promoting member engagement with SNAP, WIC, and other local programs; DC reported that it is working with its NEMT provider to promote the increased use of transportation benefits for fee-for-service beneficiaries in order to alleviate challenges with transport to urgent care and primary care; Maine reported that employment is a focus area for its behavioral health homes; and Massachusetts is seeking federal approval to allow its ACOs to use “flex funds” (under DSRIP expenditure authority) to pay for certain health-related social services.

States were also asked if the Medicaid agency collected SDOH-related data for enrollees and, if so, how that data was used. Over one-third of states, including both MCO and non-MCO states, reported that SDOH data was collected as of FY 2018 or would be collected beginning in FY 2019. These states reported a variety of SDOH data sources including screenings or assessments at the time of or following the eligibility determination process, data collected for other state programs, data derived from claims or encounter data, beneficiary surveys, information collected as a part of a care management or home visiting program, and other data submitted by providers. The most common uses reported for this data were to inform care coordination or care management, for quality improvement initiatives, and for performance measurement. Other uses mentioned included rate setting, to fulfill federal reporting requirements, and to make referrals.

Medicaid is a vital source of health care coverage in rural areas and small towns that tend to have lower household incomes, lower rates of workforce participation, and higher rates of disability compared to the rest of the nation.9 Nearly half of states reported a variety of new or expanded initiatives to improve access to care in rural areas implemented in FY 2018 or FY 2019. The most frequently mentioned type of initiative related to telehealth, including e-Consult, telemedicine, tele-monitoring, and Project ECHO10 programs. Strategies mentioned by at least two states included funding increases for rural providers, expanded SUD treatment services in rural areas, expanded funding for primary care residency programs, and participation in multi-payer initiatives that promote rural access to care.

Nearly three-quarters of states reported initiatives to expand access to mental health (MH) or SUD services in FY 2018 or FY 2019 (MH/SUD policy changes that expand access are also discussed in the “Eligibility and Premiums” and “Benefits and Copayments” sections of this report). The most commonly reported actions were seeking waiver authority to expand coverage of services provided in an Institute for Mental Disease (IMD) and adding coverage for new MH or SUD services, often under waiver authority. Several states also reported delivery system reforms expected to improve access, such as adoption of the Hub & Spoke model, MCO integration efforts and establishment of mental health and SUD Health Homes.11

Other initiatives reported included access-related incentive payments; allowing up to 5% of the cost of MCO behavioral health-related “community investments” to be counted as benefit expenditures rather than administrative costs; promoting the use of the SBIRT (Screening, Brief Intervention, and Referral to Treatment) tool in physician offices, FQHCs, and intake areas of institutional settings; participating in the CMS Innovation Accelerator Program, the Opioid Data Analytic Cohort; participating in a state SUD Treatment and Reentry Center Project for offenders; eliminating copays for pharmacy SUD treatment services; and geographically expanding an HCBS program for persons with severe disabling mental illness.

Table 8: Select Delivery System and Payment Reform Initiatives in all 50 States and DC, In Place in FY 2018 and Actions Taken in FY 2019