A growing number of states are pursuing Section 1115 waivers that include policies that would result in eligibility restrictions in FY 2018 and FY 2019 (Exhibit 1). Some of these policies are in response to January 2018 CMS guidance1 indicating the agency’s support for Section 1115 waiver proposals that would require certain Medicaid enrollees to meet a work requirement in order to maintain coverage. Policies that have or are likely to result in enrollment declines are counted as restrictions in this report.

Six states reported implementing restrictions in FY 2018 and 11 states reported restrictions already implemented or planned for implementation in FY 2019 (Exhibit 1 and Table 1). This year’s survey reports changes that states plan to implement in FY 2019, even if the changes are in Section 1115 waiver proposals that are still pending approval2 at CMS. Waiver provisions that states plan to implement in FY 2020 or after are described later in the “Challenges and Priorities” section of this report.

Eight states reported implementing or plans to implement work requirements under Section 1115 waiver authority in FY 2018 or FY 2019 (Table 2).3 These policies generally require beneficiaries to verify their participation in approved activities, such as employment, job search, or job training programs, for a certain number of hours per week or month to receive health coverage or qualify for an exemption. Data show, however, that most Medicaid enrollees are already working or would qualify for exemptions from these requirements, yet these individuals would still need to navigate a reporting or exemption process to retain their Medicaid coverage. In this report, work requirement policies are counted based on the initial date of implementation rather than the date on which the first coverage terminations will occur.

Many of these states reported new administrative requirements or costs associated with implementation of work requirement policies, including those related to vendor contracts for call centers, systems modifications, increased state and local office staff, outreach to beneficiaries and providers, and increased MCO personnel costs.

Other examples of reported eligibility restrictions in FY 2018 or FY 2019 include:

Two states (Maine and Virginia) plan to implement the ACA Medicaid expansion in FY 2019. These expansions will add to the 32 states that had already implemented the ACA Medicaid expansion as of July 2018 (Figure 1). In Virginia, the expansion was adopted as part of the FY 2019-2020 Medicaid budget, with implementation planned for January 1, 2019. Maine voters adopted the Medicaid expansion through a ballot initiative in November 2017 that required submission of a state plan amendment (SPA) within 90 days and implementation of expansion within 180 days of the measure’s effective date.8 After failing to meet the SPA submission deadline (April 3, 2018), Maine’s Governor complied with a Maine Supreme Judicial Court order to submit an expansion SPA on September 4, 2018 but also sent a letter to the federal government asking CMS to reject the SPA. The expansion had not yet been implemented at the time of the survey, and implementation will fall to the new governor after the November 2018 election. 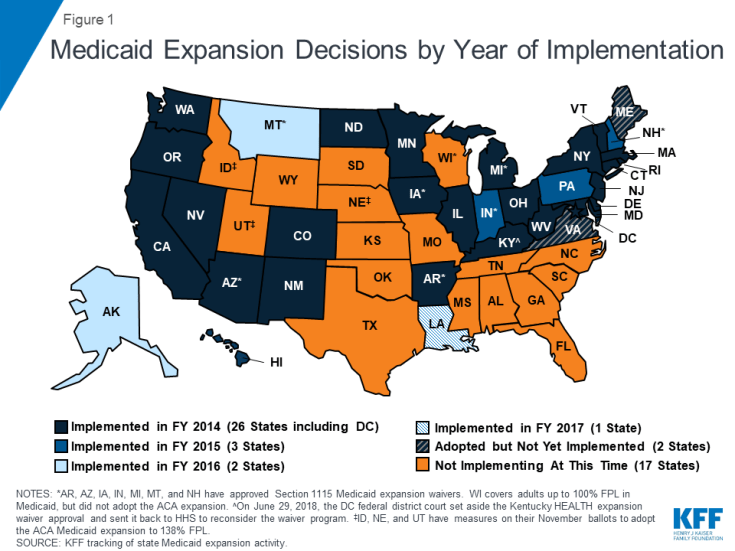 Three additional states (Idaho, Nebraska, and Utah) will have referendum initiatives to adopt the Medicaid expansion on the November 2018 ballot. Montana also has an expansion-related initiative for voters on the November ballot that would eliminate the state’s June 2019 expansion program sunset date and raise tobacco taxes to fund the state’s share of expansion costs.

The Medicaid statute generally does not allow states to charge premiums to most Medicaid beneficiaries. Historically, premiums were limited to special higher income categories of beneficiaries such as expanded Medicaid for the working disabled. However, some states have obtained waiver authority to charge higher premiums and/or copayments than otherwise allowed.

Only Indiana reported activity related to Medicaid premiums in FY 2018 (Table 2). Effective January 1, 2018, the state changed its monthly premiums (which are paid into a health account) for expansion adults from 2% of income to tiered amounts based on income ranges (expressed as a percentage of the FPL). The result is reduced fluctuation of premiums. This report considers the change neutral from the beneficiary’s perspective.

Seven states report proposed implementation of new premium programs or changes to existing premiums for FY 2019 (Table 2). Three of these states (Idaho, Indiana, and Iowa) have already received approval for these changes, while they are still pending as part of Section 1115 waiver requests in four states (Kentucky, Maine, Michigan, and New Mexico). Notable FY 2019 premium policy changes include an approved waiver provision in Indiana to implement a premium surcharge for tobacco users and a pending waiver request in Michigan to require premiums of up to 5% of income (a higher amount than CMS has ever approved for any state) for expansion adults after 48 cumulative months of expansion eligibility.

In recent years, many states have implemented new policies to connect individuals involved with the criminal justice system to Medicaid, as the Medicaid expansion extended new coverage to these individuals in many states (especially childless adults who were not previously eligible in most states). Connecting these individuals to health coverage10 can facilitate their integration back into the community upon release. While individuals may be enrolled in Medicaid while they are incarcerated, Medicaid cannot cover the cost of their care during incarceration, except for inpatient services. Nearly all states have policies in place to cover inpatient care under Medicaid for eligible, incarcerated individuals (Exhibit 3 and Table 3). Most states are also working with corrections agencies and with local jails to facilitate Medicaid enrollment prior to release. The majority of states do not terminate Medicaid coverage for enrollees who become incarcerated: states either maintain the eligibility of the incarcerated individual with benefits limited to inpatient hospital care, or they suspend eligibility. When coverage is suspended, it can be reinstated more easily and quickly upon release from incarceration or when an inpatient hospital stay occurs.

As this report was being finalized, the Substance Use Disorder Prevention that Promotes Opioid Recovery and Treatment for Patients and Communities (SUPPORT) Act was expected to be signed into law. Beginning in October 2019, the Act would prohibit states from terminating Medicaid eligibility for an individual under age 21 or former foster care youth up to age 26 while incarcerated. States would also be required to redetermine eligibility prior to release without requiring a new application and restore coverage upon release.

Table 3: Corrections-Related Enrollment Policies in all 50 States and DC, in Place in FY 2018 And Actions Taken in FY 2019