Enrollment by Firm.  As in prior years, Medicare Advantage enrollment in 2014 tends to be highly concentrated among a small number of firms (Exhibit 12 and Table A4).  In 2014, six firms or affiliates accounted for 72 percent of the market: United Healthcare (20%), Humana (17%), Blue Cross Blue Shield (BCBS) affiliated plans (17%), Kaiser Permanente (8%), Aetna (7%), and Cigna (3%).  Another 6 national firms account for 5 percent of the market, including Wellcare, HealthNet, Universal American, Munich American Holding Corporation, and Wellpoint not affiliated with BCBS.  The remaining enrollees are in plans offered by more locally or regionally focused firms. 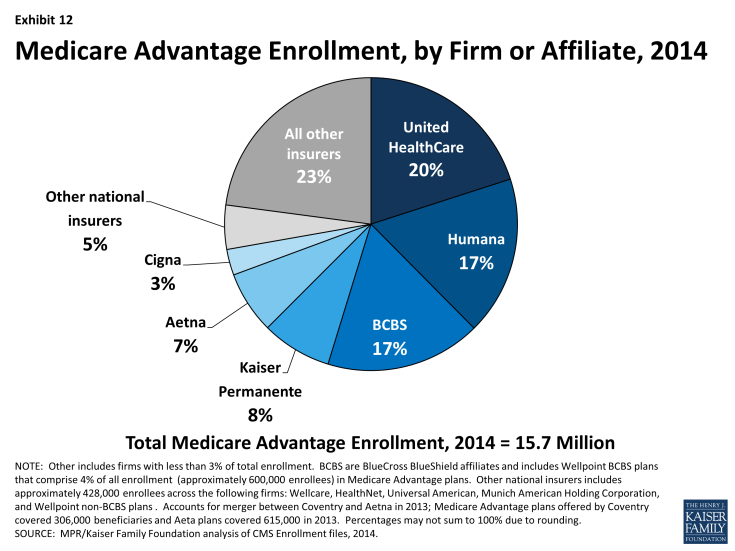 Firms differ in how they position themselves in the market, including the plan types they offer. As has been the case historically, almost all of Kaiser Permanente’s enrollees (94%) are in HMOs and the remainder are in similarly structured cost plans (Exhibit 13).  In contrast, United Healthcare’s enrollment is in HMOs, local PPOs, regional PPOs, and PFFS plans, in proportions that are similar with the nationwide enrollment distribution. Compared to United Healthcare, Humana and BCBS affiliated plans have a smaller share of their enrollment in HMOs (45% for each versus 62% for United Healthcare). Humana’s distribution of enrollment across plan types continues the shift from earlier years when a much larger share of Humana’s enrollees were in PFFS plans. 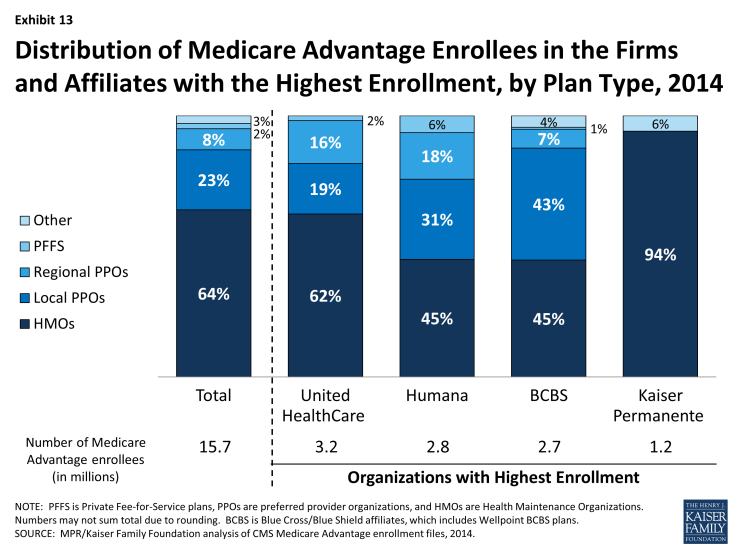 Exhibit 13: Distribution of Medicare Advantage Enrollees in the Firms and Affiliates with the Highest Enrollment, by Plan Type, 2014

Between 2013 and 2014, some firms appear to have grown their group enrollment particularly rapidly, suggesting that they had a change in employers contracting with them.  Growth in the group market accounts for all of the net growth in United Healthcare’s enrollment over the past year.  Wellpoint BCBS’s total Medicare Advantage enrollment would have declined in the absence of a large increase in group enrollment (from roughly 28,000 to 120,000). In contrast, enrollment in Kaiser Permanente’s individual plans grew more rapidly than its group enrollment.1  Most of the growth in Medicare Advantage enrollment is in the individual market, but enrollment through group plans increased particularly rapidly in 2014 and has been a major factor in the experience of some firms. 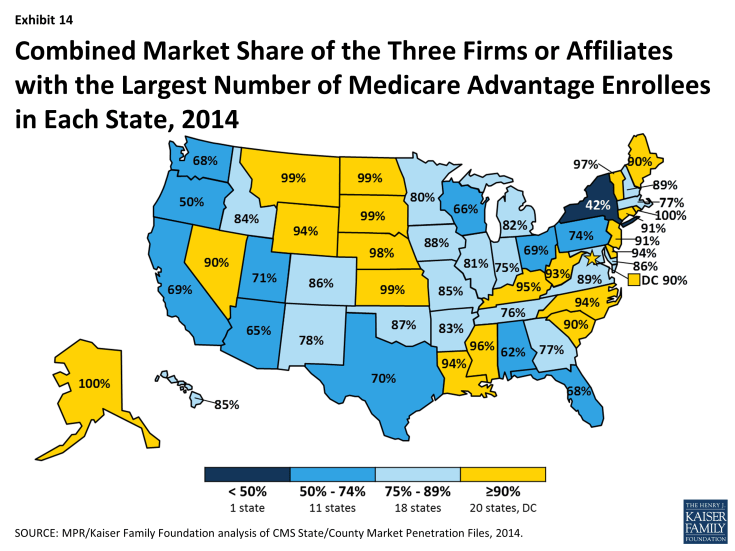 Exhibit 14: Combined Market Share of the Three Firms or Affiliates with the Largest Number of Medicare Advantage Enrollees in Each State, 2014

Despite the payment changes, enrollment continues to grow across counties in each of the four quartiles of traditional Medicare spending (Table A6). Between 2013 and 2014, enrollment grew at a relatively similar rate in aggregate across in highest quartile counties (8.3%) as in the lowest quartile counties (8.7%), and higher, but not very much differently, in the two quartiles in between (10.7% and 12.3%, respectively).  In 2014, overall penetration also was not very different across quartiles (ranging from 27% to 34%). Thus, enrollment continues to grow across counties that differ in traditional Medicare spending, which is not surprising given that Medicare Advantage penetration rates have historically been high in several low cost counties (e.g., Multnomah, OR and Boise, ID) as well as high cost counties (Miami-Dade, FL and Los Angeles, CA).