Specialized Sectors of the Market

In 2014, 3.0 million of the 15.7 million Medicare Advantage enrollees were in a group plan (Exhibit 5 and Table A2). Of this total, 59 percent were enrolled in local PPOs and 37 percent were enrolled in HMOs.  In contrast to the individual market, PPOs account for a larger share of the group market than HMOs. The share of Medicare Advantage enrollees in group plans has never been very large, but the numbers are growing, consistent with trends in the overall Medicare Advantage market. In the recent past, group enrollment in Medicare Advantage has grown proportionately to the growth in the market overall; between 2008 and 2013, the number of group enrollees grew from 1.7 million to 2.5 million, but the relative share in the group market changed little over the time period (17.5% in 2008 versus 17.3% % in 2013).  In the past year, group enrollment increased by 17 percent (0.4 million additional enrollees), rising at a faster rate than the 7.9 percent growth rate in the individual market (0.9million additional enrollees).  Today, group enrollees account for 19 percent of the total Medicare Advantage population. 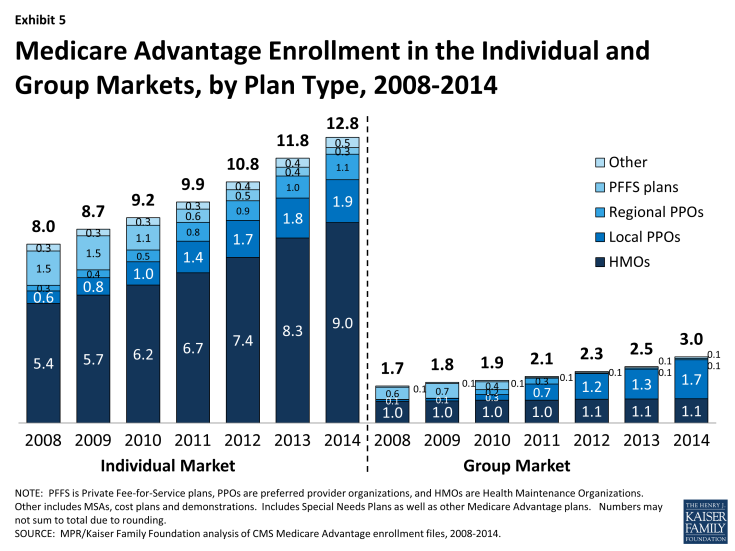 Exhibit 5: Medicare Advantage Enrollment in the Individual and Group Markets, by Plan Type, 2008-2014 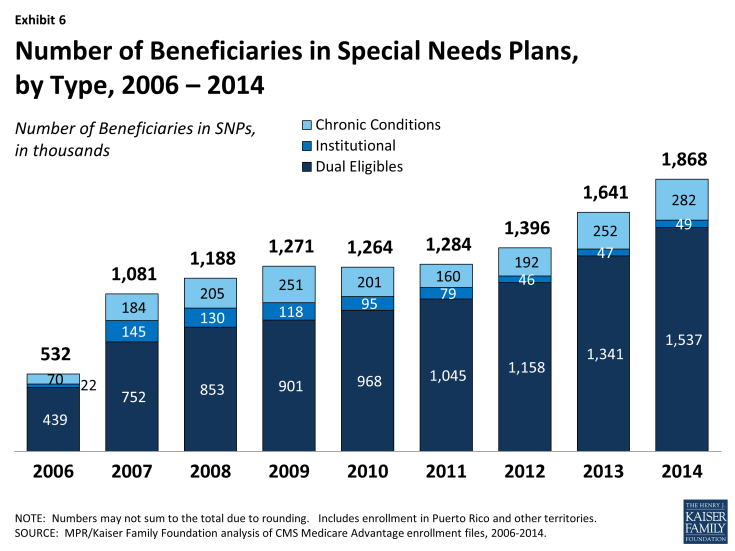 Most SNP enrollees (1.5 million or 82%) are in plans serving those dually eligible for Medicare and Medicaid. Such enrollment varies greatly by state, and enrollment of dually eligible beneficiaries in SNPs is particularly prevalent in four states: Hawaii (62%), Arizona (44%), Utah (35%), and Minnesota (30%).

Separately, several states (including CA, MA, MN, NY, IL, OH, SC, VA, and WA) are undertaking demonstrations with CMS to improve the financial alignment of Medicare and Medicaid for dually eligible beneficiaries.  In many states, SNPs may continue to operate separately from the demonstration, and dually eligible beneficiaries enrolled in these SNPs can remain in them.  It is not clear how the demonstration will affect the growth in D-SNP enrollment over time in these states.