Medicare Advantage enrollees are responsible for paying the Part B premium, in addition to any premium charged by the plan. The Medicare Advantage premium paid by enrollees reflects the difference between the plan’s costs of providing Part A and B benefits and any supplemental benefits offered, and the federal payment to the plan for the benefits.  Plans receive a percentage of the difference between their bid and the maximum federal payment (known as a rebate) and are required to use this amount to offset any extra benefits not offered by traditional Medicare, any reduced cost sharing, or the Part B premium. If Part D is part of the plan, as it is for most enrollees, the plan may also use the rebate to reduce the Part D premium.

Average Premium Trends. The average enrollee in an MA-PD paid a monthly premium of about $35 in 2014, reflecting little change since 2012, and a reduction in average premiums since 2011 ($38)  and 2010 ($43) (Exhibit 7). It is important to note, however, that the actual premium an enrollee pays varies by plan type and locale, as well as by decisions and preferences of enrollees, such as whether they are willing to pay more for a broader network or more generous benefits. Average premiums and trends in premiums paid by enrollees vary across plan types.  Enrollee premiums in 2014 averaged $27 per month for HMOs, $32 per month for regional PPOs, $59 per month for local PPOs, and $63 per month for PFFS plans.  Compared to 2013, the average HMO premium was unchanged whereas average premiums for local PPOs, regional PPOs, and PFFS plans increased by an average by $1, $3, and $11 per month, respectively.  In 2014, enrollees are generally paying lower premiums in 2014 than in 2010, mainly due to the reduction in average HMO and local PPO premiums over that period and most enrollees are in HMOs and local PPOs in 2014. 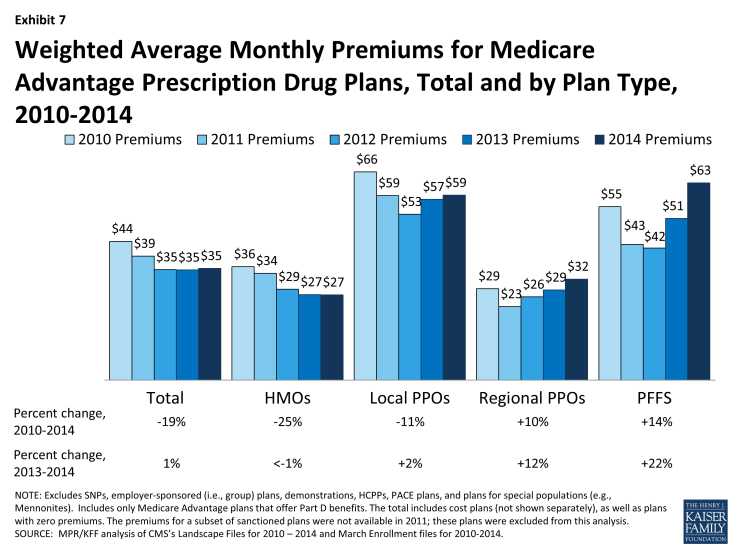 Zero Premium Plans.  As in prior years, most Medicare beneficiaries (84%) had a choice of at least one MA-PD that charged no additional premium for coverage, other than the monthly Part B premium, also known as “zero premium plans”.  Many plans view such products as good ways of attracting enrollees into Medicare Advantage since they often provide more benefits than traditional Medicare and “one stop shopping” that avoids separate decisions about Part D and supplemental coverage through various Medigap options. 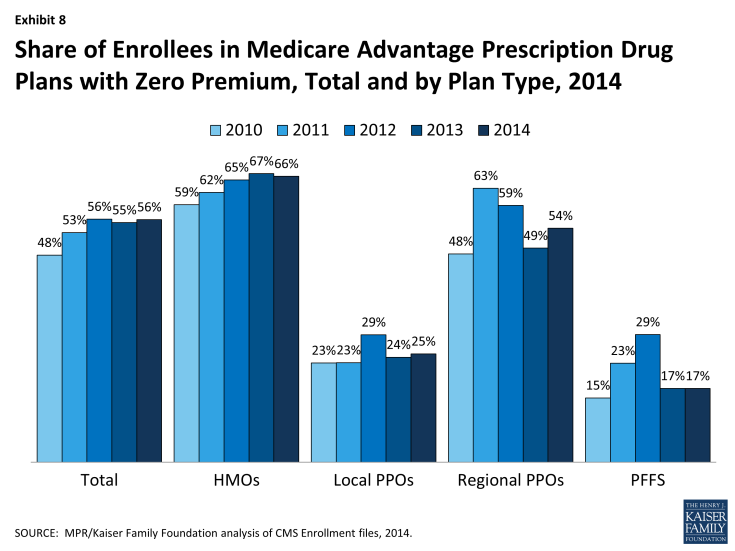 Specialized Sectors of the Market Benefits