OUT OF POCKET LIMITS AND DONUT HOLE COVERAGE

In addition to analyzing premiums, we examined variations across plans and trends with respect to two types of benefits: the limit on out-of-pocket costs set by the plan and the availability of expanded Part D benefits relating to the coverage gap or “donut” hole. 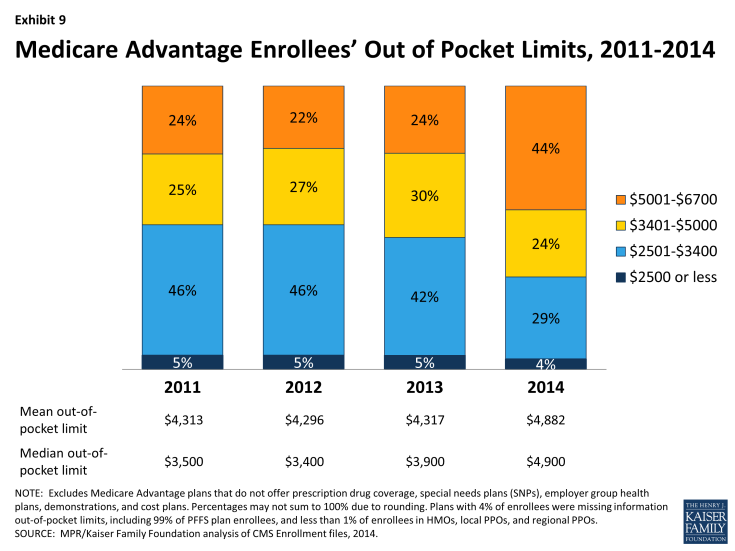 Historically, HMOs have had the lowest average out of pocket limit and regional PPOs have had the highest average out of pocket limit (Exhibit 10). While this remains the case in 2014, limits have risen considerably across plans of all types.  Virtually all regional PPO enrollees (98%), 43 percent of local PPO enrollees, and 38 percent of HMO enrollees are in a plan with a limit over $5,000 annually. While limits define ultimate financial liability rather than the amount an enrollee pays, limits are important and also valuable in communicating to beneficiaries their potential maximum liability, at least for in-network Medicare-covered benefits, in the plan. 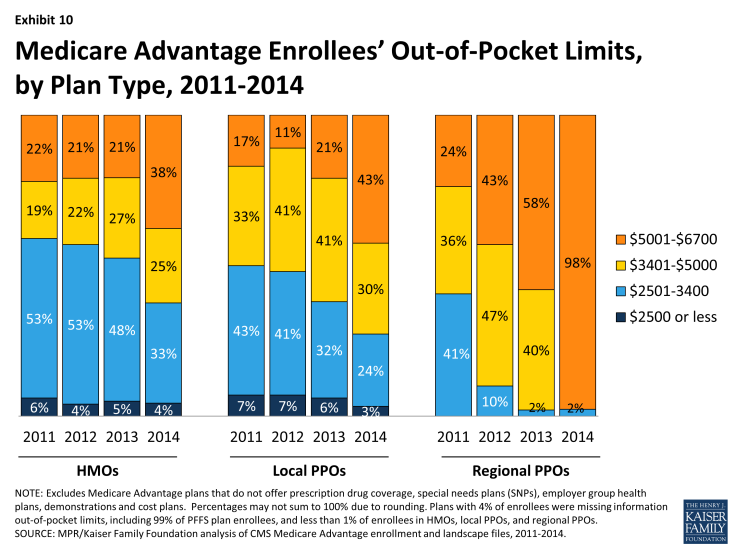 Coverage in the Part D Donut Hole.  The standard Medicare Part D benefit in 2013 has a $310 deductible and 25 percent coinsurance up to an initial coverage limit of $2,850 in total drug costs, followed by a coverage gap (the so-called “donut hole”), until their total out of pocket Part D spending reaches $4,550 when the catastrophic limit kicks in and beneficiaries pay 5 percent of specified limits for drugs. The ACA gradually reduces the coverage gap until it is eliminated in 2020. In 2014, enrollees in plans with no additional gap coverage will pay 47.5 percent of the total costs of brands and 72 percent of the total cost of generics in the gap until they reach the catastrophic limit.

Covering a larger share of beneficiaries’ out-of-pocket costs in the “coverage gap” is one way Medicare Advantage plans can enhance benefits. In 2014, about half (49%) of all Medicare Advantage enrollees were in plans that offered no additional coverage in the gap (Exhibit 11). Twenty two percent were in plans with some additional coverage for generics and 27 percent with some additional coverage for both some generics and brand name drugs. A relatively small share of enrollees in regional PPOs had any additional gap coverage (30%) compared to enrollees in HMOs (57%).  Most stand-alone Part D plans provide little or no gap coverage in 2014 beyond what is required under the standard benefit.1 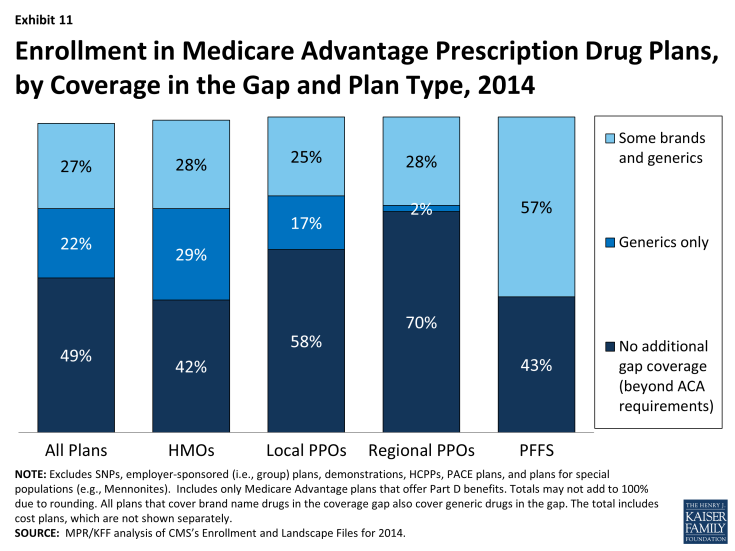 Exhibit 11: Enrollment in Medicare Advantage Prescription Drug Plans, by Coverage in the Gap and Plan Type, 2014