How does Medicaid financing work? 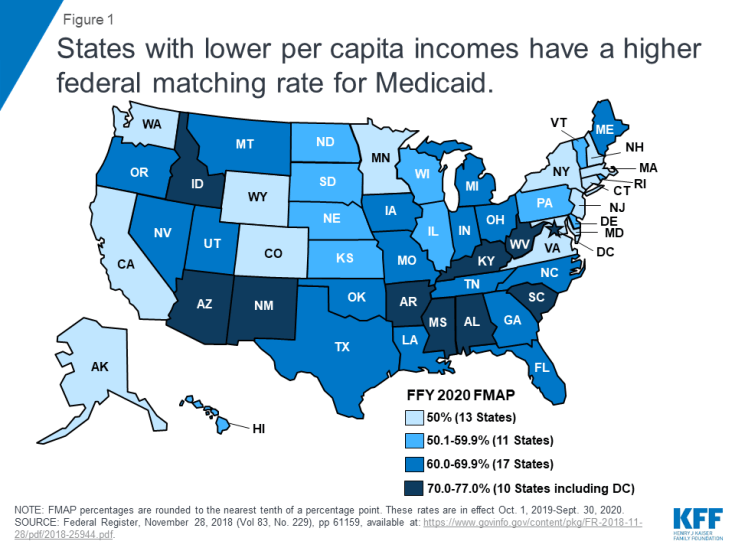 Figure 1: States with lower per capita incomes have a higher federal matching rate for Medicaid.

There are special match rates for the ACA, administration, and other services. While the standard FMAP applies to the vast majority of Medicaid spending, there are a few exceptions that provide higher match rates for specific populations and services including family planning, some new options to expand community long-term care services, and most notably the Affordable Care Act (ACA) provided 100 percent federal financing for those made newly eligible by the law from 2014 to 2016 (with that match phasing down to 90 percent by 2020). In general, costs incurred by states in administering the Medicaid program are matched by the federal government at a 50 percent rate. There are, however, some types of administrative functions which are matched at higher rates such as eligibility and enrollment systems.5 Medicaid administrative costs in general represent a relatively small portion of total Medicaid spending (5 percent or less).6

Medicaid also provides “disproportionate share hospital” (DSH) payments to hospitals that serve a large number of Medicaid and low-income uninsured patients.7 Federal DSH payments totaled $15.1 billion in FFY 2017.8 While states have considerable discretion in determining the amount of DSH payments to each DSH hospital, federal DSH funds are capped for the state and also capped at the facility level. Based on the assumption of increased coverage and therefore reduced uncompensated care costs under the ACA, the law called for a reduction in federal DSH allotments starting in FFY 2014. The cuts have been delayed several times and are currently set to take effect in FFY 2020.

Unlike in the 50 states and D.C., annual federal funding for Medicaid in the territories is subject to a statutory cap and fixed matching rate. Notwithstanding temporary relief funds, once a territory exhausts its capped federal funds, it no longer receives federal financial support for its Medicaid program during that fiscal year. This places additional pressure on territory resources if Medicaid spending continues beyond the federal cap – making the effective match rate lower than what is set in statute. The ACA included $7.3 billion in additional funds available across all five territories under the ACA, but most of these funds expire at the end of September 2019. The ACA also increased the traditional territory FMAP from 50 percent to 55 percent (plus 2.2 percentage points for 2014 and 2015) and provided the territories with a higher matching rate for non-disabled adults without children (87 percent in 2017). Puerto Rico and United States Virgin Islands (USVI) received additional funds with 100 percent match rate after Hurricanes Irma and Maria hit Puerto Rico and the USVI in September 2017. However, these funds also expire at the end of September 2019.

How much does Medicaid cost and how are funds spent? 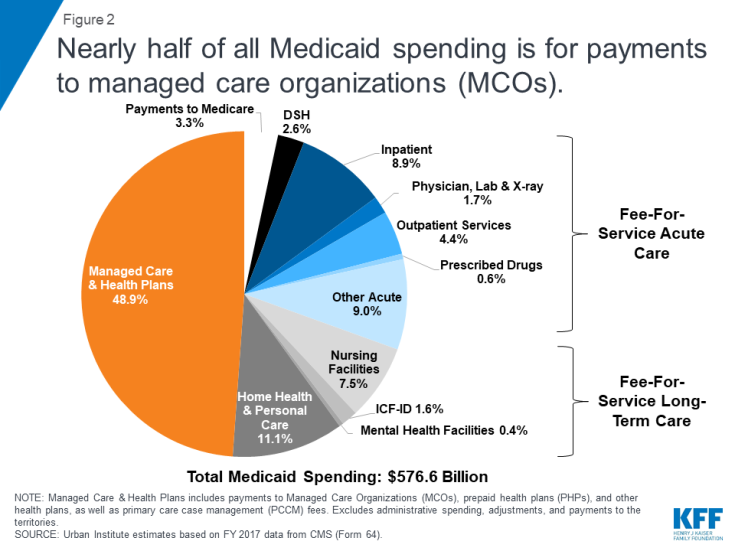 Figure 2: Nearly half of all Medicaid spending is for payments to managed care organizations (MCOs).

Almost two-thirds of all Medicaid spending for services is attributable to the elderly and persons with disabilities, who make up less than one-quarter of all Medicaid enrollees (Figure 3). Dual eligible beneficiaries alone account for almost 40 percent of all spending, driven largely by spending for long-term care.12 The 5 percent of Medicaid beneficiaries with the highest costs drive more than half of all Medicaid spending.13 Their high costs are attributable to their extensive needs for acute care, long-term care, or often both. 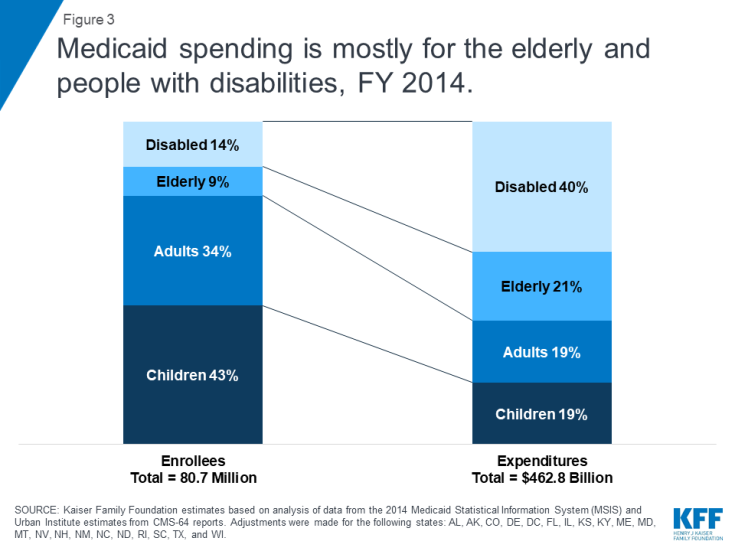 Figure 3: Medicaid spending is mostly for the elderly and people with disabilities, FY 2014.

Medicaid enrollment and spending increases during recessions. Medicaid spending is driven by multiple factors, including the number and mix of enrollees, medical cost inflation, utilization, and state policy choices about benefits, provider payment rates, and other program factors. During economic downturns, enrollment in Medicaid grows, increasing state Medicaid costs at the same time that state tax revenues are declining. Figure 4 shows peaks in Medicaid spending and enrollment in 2002 and 2009 due to recessions. Enrollment and spending also increased significantly following implementation of the ACA, but have moderated in more recent years. While slower caseload growth has helped to mitigate Medicaid spending growth in recent years, higher costs for prescription drugs, long-term services and supports and behavioral health services, as well as state policy decisions to implement targeted provider rate increases have been recently cited as factors putting upward pressure on Medicaid spending.14 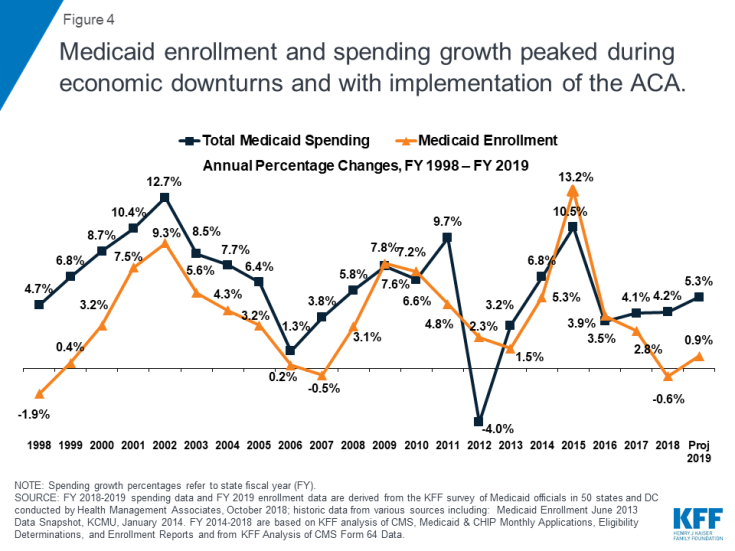 Figure 4: Medicaid enrollment and spending growth peaked during economic downturns and with implementation of the ACA.

Based on current flexibility in the Medicaid program, there is considerable variation in per enrollee costs across eligibility groups and across states. Total spending per full benefit enrollee ranged from a low of $4,003 in Nevada to $10,721 in North Dakota in FY 2014 (Figure 5).15 Spending for the elderly and individuals with disabilities may be more than four times the spending for an adult and more than seven times spending for an average child covered by the program (Figure 6).16 In addition, even within a given state and eligibility group, per enrollee costs may vary significantly, particularly for individuals with disabilities. 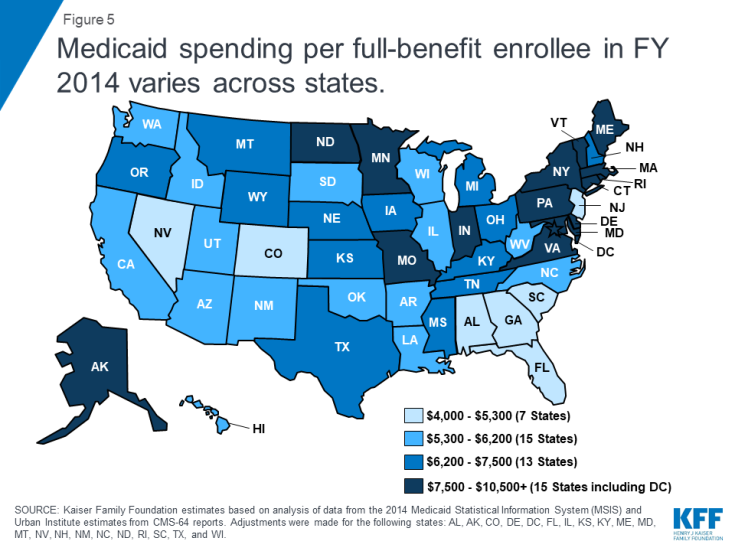 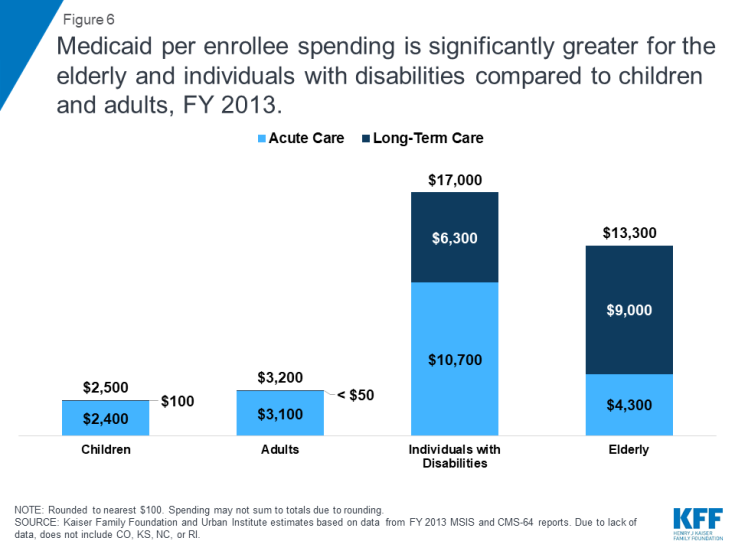 Figure 6: Medicaid per enrollee spending is significantly greater for the elderly and individuals with disabilities compared to children and adults, FY 2013.

Medicaid growth per enrollee has been lower than private health spending. Because states share in the financing of Medicaid and states must balance their budgets annually, there is an incentive to constrain Medicaid spending. States seek to control costs by restricting payment rates, controlling prescription drug costs, and through implementing payment and delivery system reforms. Medicaid per enrollee spending grew slower than Medicare, national health expenditures, and private health insurance for all time periods from 2007 to 2017 (Figure 7).17 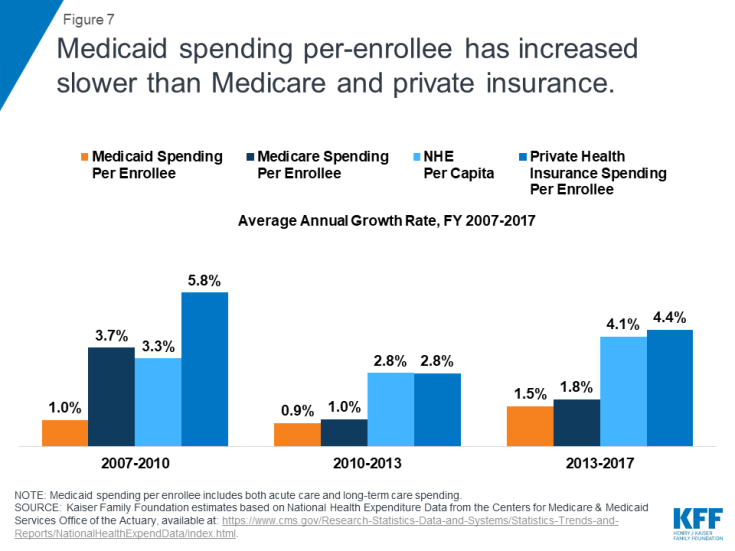 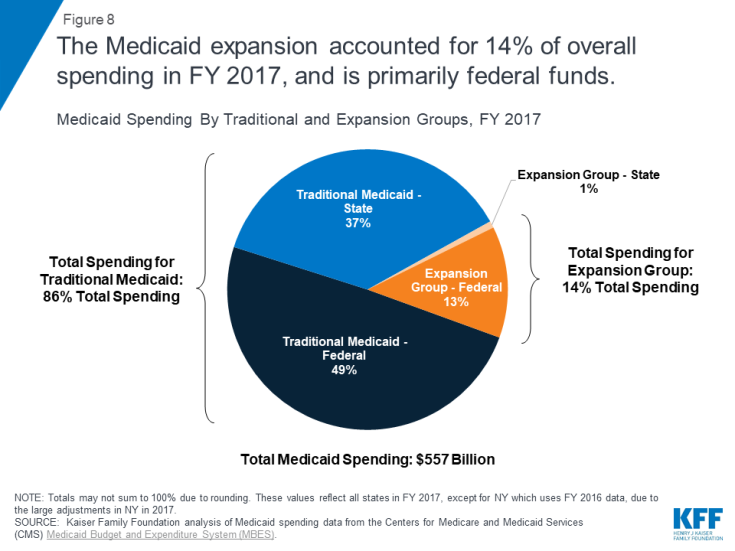 Figure 8: The Medicaid expansion accounted for 14% of overall spending in FY 2017, and is primarily federal funds.

What is the role of Medicaid in the federal and state budgets?

Medicaid is the third largest mandatory spending program in the federal budget following Medicare and Social Security (Figure 9). In FFY 2018, spending on Medicaid accounted for 9 percent of federal spending.19 Medicaid accounts for a lesser amount of federal spending compared to Medicare because program costs are shared by the federal government and the states. The Congressional Budget Office (CBO) notes that growth in the elderly population is projected to increase spending for some programs including Medicaid. Overall, CBO projects Medicaid spending growth of about 4 percent per year through 2021 and 6 percent per year from 2022 through 2029; higher out-year growth rate is attributed to increases in spending per enrollee and higher projected unemployment, which would increase enrollment in the Medicaid program.20 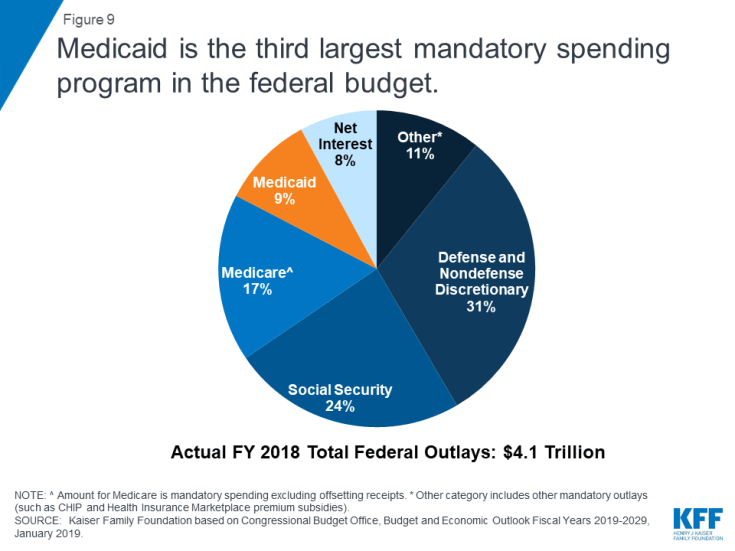 Figure 9: Medicaid is the third largest mandatory spending program in the federal budget.

Medicaid is a spending item but also the largest source of federal revenues for state budgets. As a result of the federal matching structure, Medicaid has a unique role in state budgets as both an expenditure item and a source of federal revenue for states. In SFY 2017, Medicaid accounted for 26.5 percent of total state spending for all items in the state budget, but 14.2 percent of all state general and other fund spending,21 a far second to spending on K-12 education (24.8 percent22 of state general and other fund spending). Medicaid is the largest single source of federal funds for states, accounting for more than half (55.1 percent) of all federal funds for states in FY 2017 (Figure 10).23 Due to the match rate, as spending increases during economic downturns, so does federal funding. During the last two economic downturns, Congress enacted legislation to temporarily increase the federal share of Medicaid spending to provide increased support for states to help fund Medicaid. 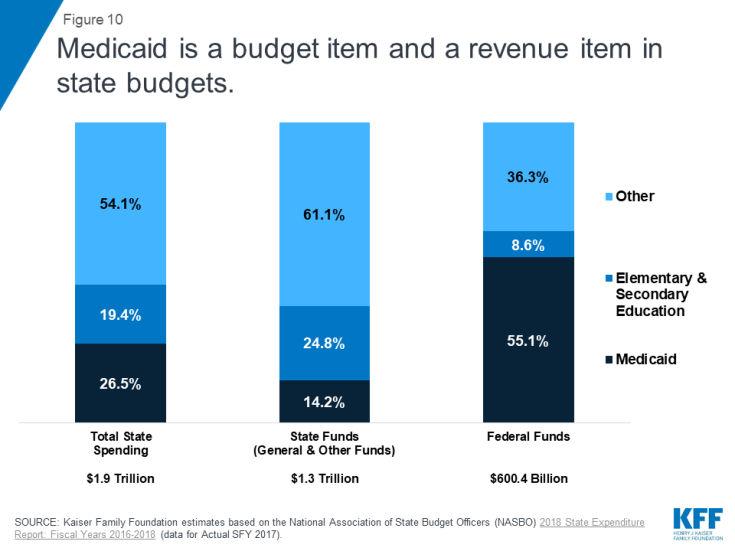 Figure 10: Medicaid is a budget item and a revenue item in state budgets. 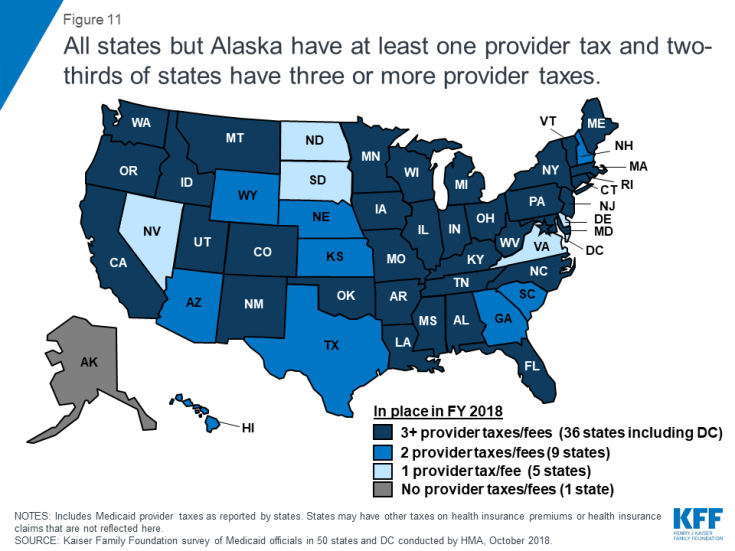 Figure 11: All states but Alaska have at least one provider tax and two-thirds of states have three or more provider taxes.

In responding to two major recessions in the last 15 years, states have adopted an array of policies to control Medicaid spending growth. During economic downturns, enrollment grows but states have implemented policies to restrict provider reimbursement rates and trim benefits. Some of these restrictions are restored when the economy improves, but Medicaid payment rates tend to be below other payers. These lower payment rates have contributed to the programs relatively low costs. In addition, states have implemented an array of strategies to control the costs of prescription drugs and most states refine these policies each year. To address long-term strategies of cost control and coordinated care, more states have moved to implement a range of payment and delivery system reforms either using managed care organizations or other models.

Research shows that the influx of federal dollars from Medicaid spending has positive effects for state economies. Medicaid spending flows through a state’s economy and can generate impacts greater than the original spending alone. The infusion of federal dollars into the state’s economy results in a multiplier effect, directly affecting not only the providers who received Medicaid payments for the services they provide to beneficiaries, but indirectly affecting other businesses and industries as well. More recent analyses find positive effects of the Medicaid expansion on multiple economic outcomes, despite Medicaid enrollment growth initially exceeding projections in many states. Studies show that states expanding Medicaid under the ACA have realized budget savings, revenue gains, and overall economic growth.25 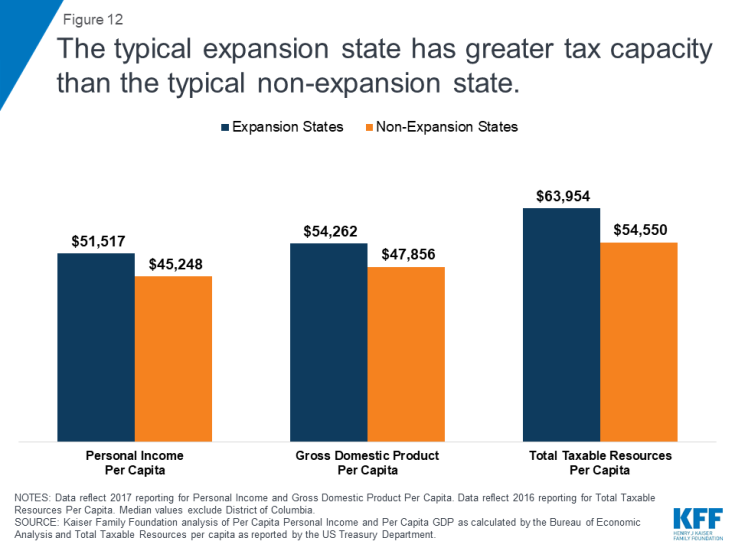 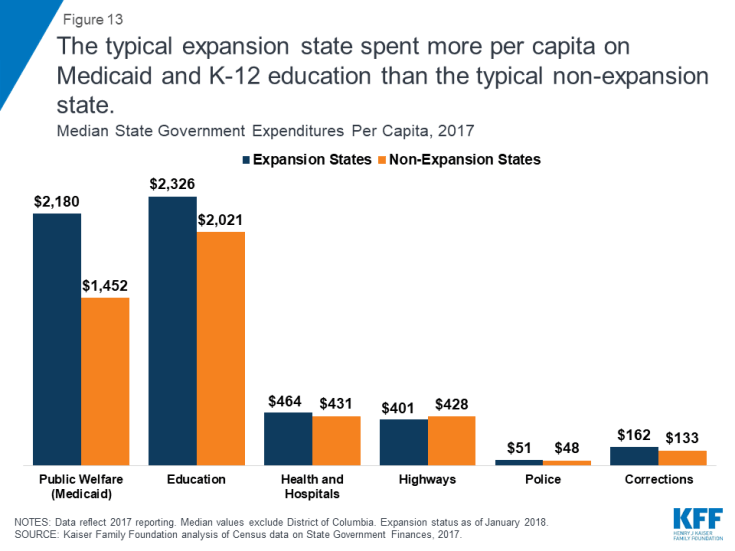 Because Medicaid plays a large role in both federal and state budgets and is the primary source of coverage for low-income Americans, it is a constant source of debate. Efforts to repeal and replace the ACA and cap federal funding through a block grant or per capita cap were narrowly defeated in 2017, but were included in President Trump’s proposed budget for FY 2020. States continue to focus on efforts to constrain Medicaid costs while federal administrative efforts may focus on providing states additional flexibility to administer their programs through waivers. As a result, Medicaid financing and the cost pressures at both the federal and state levels remain central to the ongoing policy debates, with implications for the future structure and role of Medicaid.