Managed care plays a key role in the delivery of health care to Medicaid enrollees. This brief describes key themes related to the use of comprehensive, risk-based managed care in the Medicaid program and highlights data and trends related to MCO enrollment, service carve-ins, spending, MCO parent firms, and state and plan activity related to quality, value-based payments, and the social determinants of health.

1. Today, capitated managed care is the dominant way in which states deliver services to Medicaid enrollees.

States design and administer their own Medicaid programs within federal rules. States determine how they will deliver and pay for care for Medicaid beneficiaries. Nearly all states have some form of managed care in place – comprehensive risk-based managed care and/or primary care case management (PCCM) programs.1,2 As of July 2019, 40 states, including DC, contract with comprehensive, risk-based managed care plans to provide care to at least some of their Medicaid beneficiaries (Figure 1). Medicaid managed care organizations (MCOs) provide comprehensive acute care and in some cases long-term services and supports to Medicaid beneficiaries. MCOs accept a set per member per month payment for these services and are at financial risk for the Medicaid services specified in their contracts. States have pursued risk-based contracting with managed care plans for different purposes, seeking to increase budget predictability, constrain Medicaid spending, improve access to care and value, and meet other objectives. While the shift to MCOs has increased budget predictability for states, the evidence about the impact of managed care on access to care and costs is both limited and mixed.3 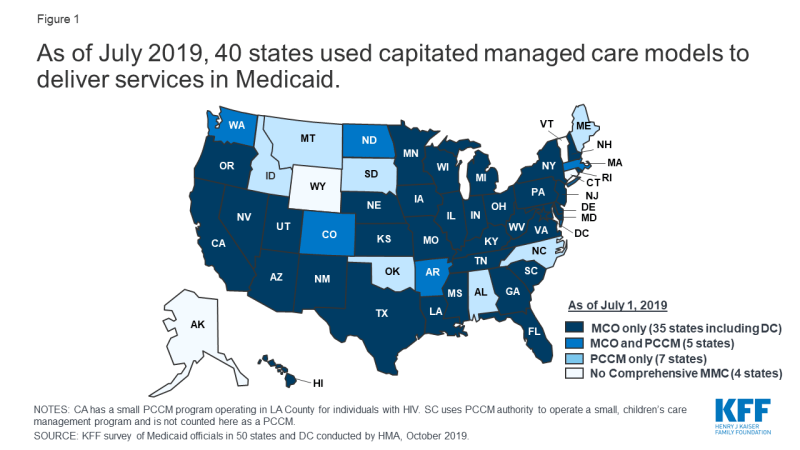 2. As of July 2017, over two-thirds (69%) of all Medicaid beneficiaries received their care through comprehensive risk-based MCOs. 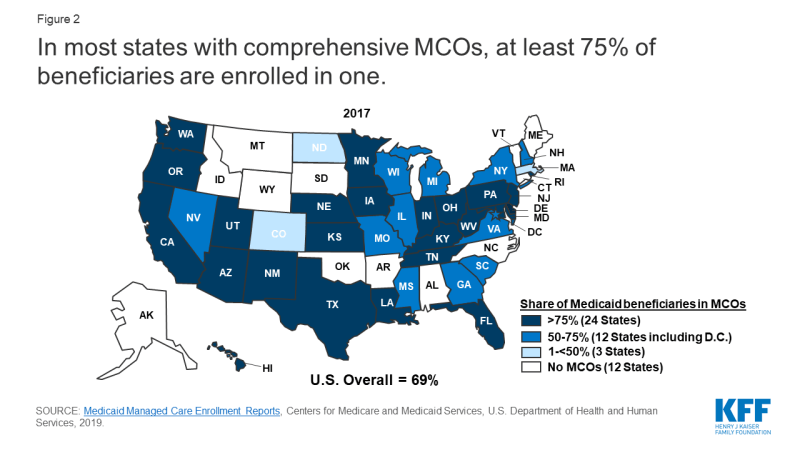 Figure 2: In most states with comprehensive MCOs, at least 75% of beneficiaries are enrolled in one.

3. Children and adults are more likely to be enrolled in MCOs than seniors or persons with disabilities; however, states are increasingly including beneficiaries with complex needs in MCOs.

As of July 2019, 36 MCO states reported covering 75% or more of all children through MCOs (Figure 3). Of the 34 states that had implemented the ACA Medicaid expansion as of July 2019, 29 were using MCOs to cover newly eligible adults and the large majority of these states covered more than 75% of beneficiaries in this group through MCOs. Thirty-two MCO states reported covering 75% or more of low-income adults in pre-ACA expansion groups (e.g., parents, pregnant women) through MCOs. In contrast, only 21 MCO states reported coverage of 75% or more of seniors and people with disabilities. Although this group is still less likely to be enrolled in MCOs than children and adults, over time, states have been moving to include seniors and people with disabilities in MCOs. 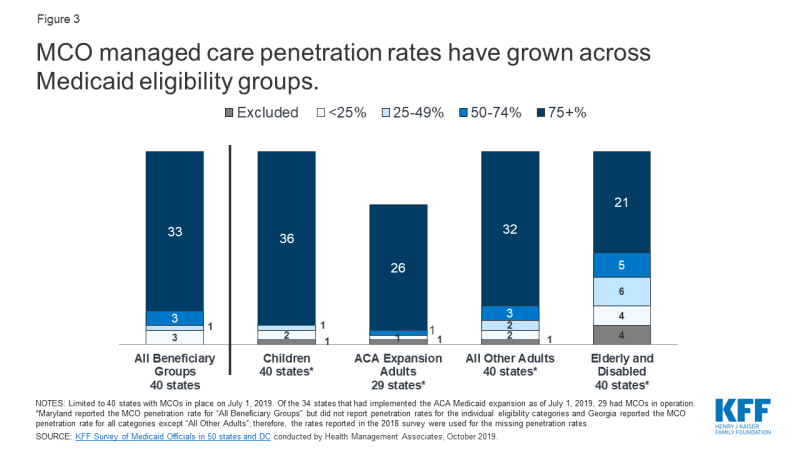 4. In recent years, many states have moved to carve in behavioral health services, pharmacy benefits, and long-term services and supports to MCO contracts.

Although MCOs provide comprehensive services to beneficiaries, states may carve specific services out of MCO contracts to fee-for-service (FFS) systems or limited benefit plans. Services frequently carved out include behavioral health, pharmacy, dental, and long-term services and supports (LTSS). However, there has been significant movement across states to carve these services in to MCOs. As of July 2019, twenty-three states also covered LTSS through Medicaid MCO arrangements for at least some LTSS populations (Figure 4). 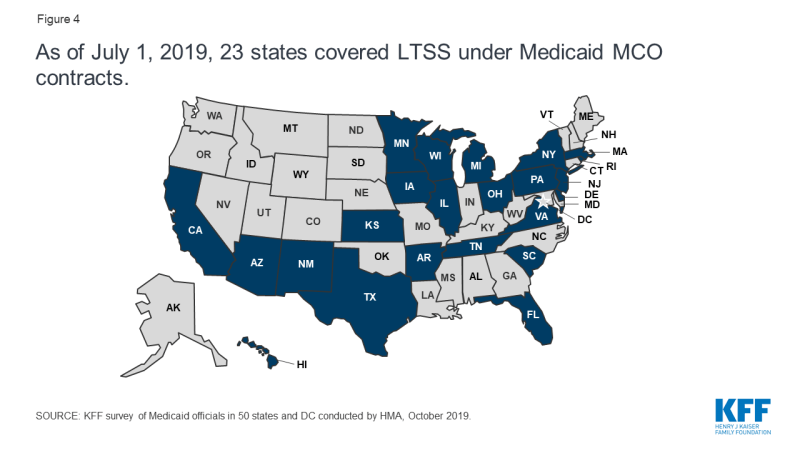 5. In FY 2018, payments to comprehensive risk-based MCOs accounted for the largest share of Medicaid spending.

In FY 2018, state and federal spending on Medicaid services totaled nearly $593 billion.4 Payments made to MCOs accounted for about 45% of total Medicaid spending (Figure 5). The share of Medicaid spending on MCOs varies by state, but more than half of MCO states direct at least 40% of total Medicaid dollars to payments to MCOs (Figure 6). The MCO share of spending ranged from a low of 8% in Colorado to 86% in Hawaii.5 State-to-state variation reflects many factors, including the proportion of the state Medicaid population enrolled in MCOs, the health profile of the Medicaid population, whether high-risk/high cost beneficiaries (e.g., persons with disabilities, dual eligible beneficiaries) are included in or excluded from MCO enrollment, and whether or not long-term services and supports are included in MCO contracts. As states expand Medicaid managed care to include higher-need, higher-cost beneficiaries, expensive long-term services and supports, and adults newly eligible for Medicaid under the ACA, the share of Medicaid dollars going to MCOs will continue to increase. 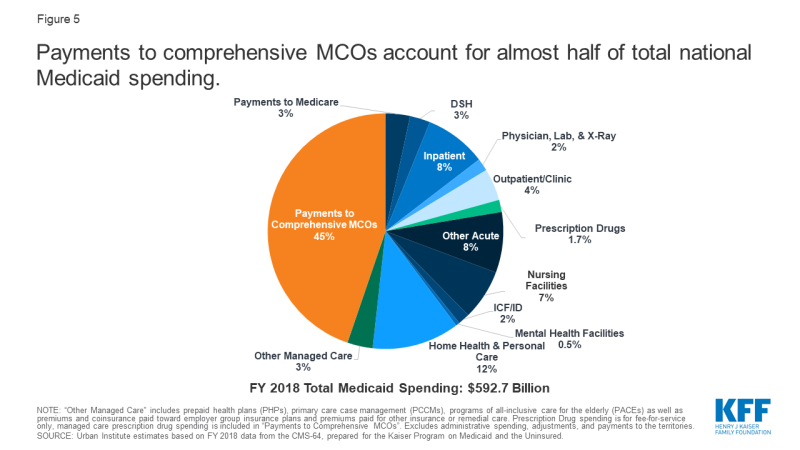 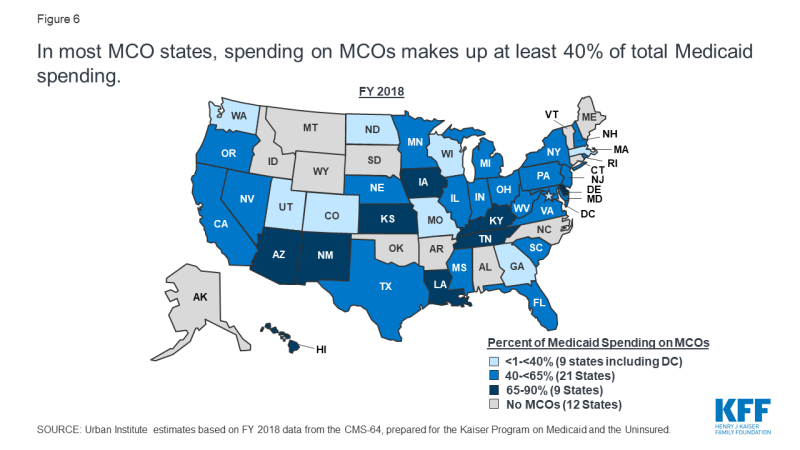 Figure 6: In most MCO states, spending on MCOs makes up at least 40% of total Medicaid spending.

6. A number of large health insurance companies have a significant stake in the Medicaid managed care market.

States contracted with a total of 282 Medicaid MCOs as of July 2017.6 MCOs represent a mix of private for-profit, private non-profit, and government plans. As of July 2017, a total of 19 firms operated Medicaid MCOs in two or more states (called “parent” firms),7 and these firms accounted for about 57% of enrollment in 2017 (Figure 8). Of the 19 parent firms, nine are publicly traded, for-profit firms while the remaining 10 are non-profit companies.8 Six firms – UnitedHealth Group, Centene, Anthem, Molina, Aetna, and WellCare – have MCOs in 10 or more states (Figure 7) and accounted for about 44% of all Medicaid MCO enrollment (Figure 8). All six are publicly traded companies ranked in the Fortune 500. 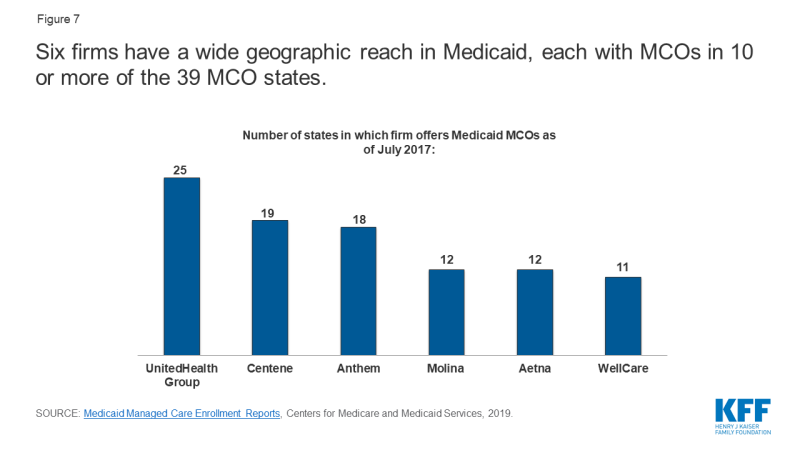 Figure 7: Six firms have a wide geographic reach in Medicaid, each with MCOs in 10 or more of the 39 MCO states. 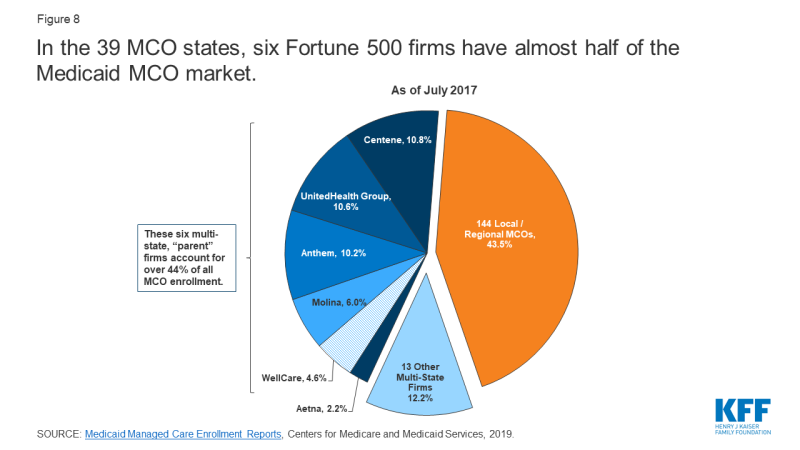 Figure 8: In the 39 MCO states, six Fortune 500 firms have almost half of the Medicaid MCO market.

7. Although MCOs report challenges recruiting specialty providers, which may be linked to broader market trends, plans report a variety of strategies to recruit providers.

Plan efforts to recruit and maintain their provider networks can play a crucial role in determining enrollees’ access to care through factors such as travel times, wait times, or choice of provider. Federal rules require that states establish network adequacy standards. States have a great deal of flexibility to define those standards. The 2016 CMS Medicaid managed care final rule included specific parameters for states in setting network adequacy standards, although regulations proposed by the Trump administration in 2018 would loosen these requirements. Medicaid fee-for-service rates tend to be lower than Medicare rates. MCOs have some flexibility to set rates for providers, but many states require minimum provider rates in their contracts with MCOs. In a 2019 KFF survey of Medicaid directors, about one-half of MCO states indicated that they mandate minimum provider reimbursement rates in their MCO contracts for inpatient hospital, outpatient hospital, or primary care physicians.9  KFF conducted a survey of Medicaid managed care plans in 201710 and found that responding plans reported more challenges in recruiting specialty providers than primary care providers to their networks. Plans were more likely to cite provider supply shortages than low provider participation in Medicaid as a top challenge in ensuring access to care. In the same survey, responding plans reported a variety of strategies to address provider network issues including direct outreach to providers, financial incentives, automatic assignment of members to PCPs, and prompt payment policies (Figure 9). 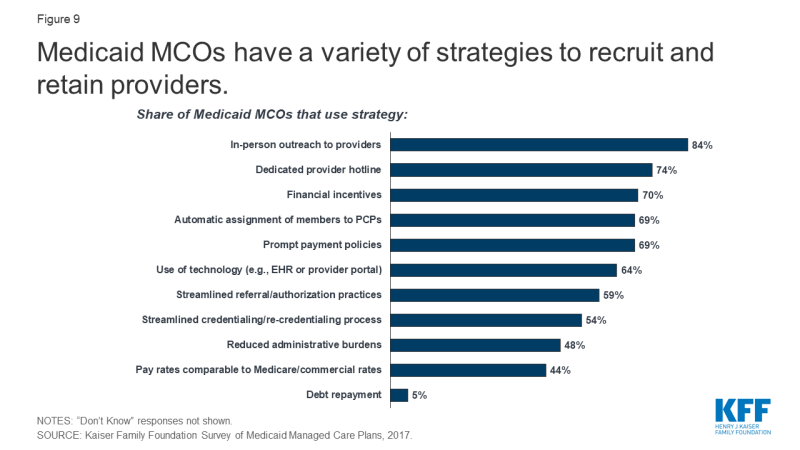 Figure 9: Medicaid MCOs have a variety of strategies to recruit and retain providers.

8. Over time, the expansion of risk-based managed care in Medicaid has been accompanied by greater attention to measuring quality and outcomes.

Nearly all MCO states reported using at least one select Medicaid managed care quality initiative in FY 2019 (Figure 10). More than three quarters of MCO states (34 of 40) reported having initiatives in place in FY 2019 that make MCO comparison data publicly available (up from 23 states in 201411). More than half of MCO states reported capitation withhold arrangements (24 of 40) and/or pay for performance incentives (25 of 40) in FY 2019 (up from 18 and 19 states, respectively, in 201412). Fewer states reported use of an auto-assignment algorithm that includes quality performance measures (11 of 40) in FY 2019. The predominance of states reporting new or expanded activity in managed care quality in FY 2020 reported activity related to enhancing/expanding existing initiatives, versus establishing new ones.

States that use a pay for performance bonus or penalty, a capitation withhold, and/or an auto-assignment quality factor report linking these quality initiatives to a variety of performance measure focus areas. Over three quarters of MCO states (31 states) reported using chronic disease management metrics when rewarding or penalizing plan performance (Figure 10).13 More than half of MCO states reported linking quality initiatives to perinatal/birth outcome measures (26 states) or mental health measures (24 states). These focus areas are not surprising given the chronic physical health and behavioral health needs of the Medicaid population, as well as the significant share of the nation’s births funded by Medicaid. 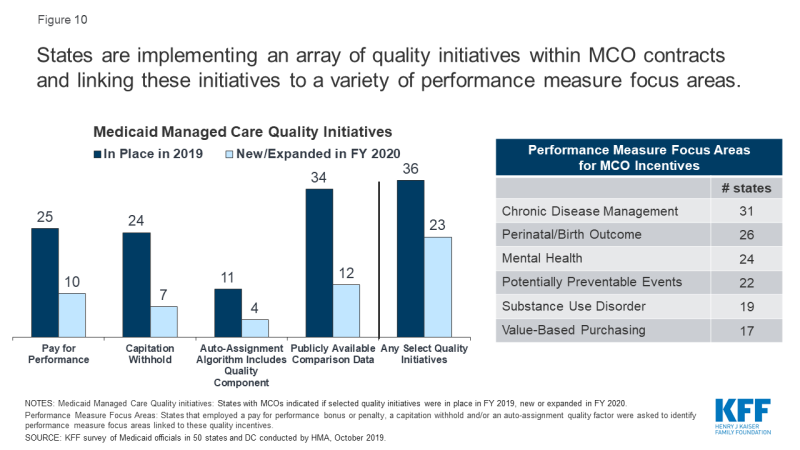 Figure 10: States are implementing an array of quality initiatives within MCO contracts and linking these initiatives to a variety of performance measure focus areas.

9. An increasing number of states set a target percentage of MCO provider payments that must be in alternative payment models (APMs). 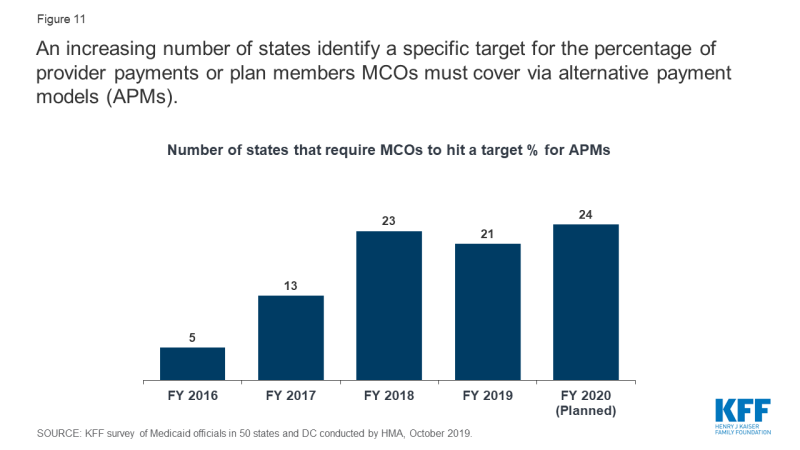 Figure 11: An increasing number of states identify a specific target for the percentage of provider payments or plan members MCOs must cover via alternative payment models (APMs). 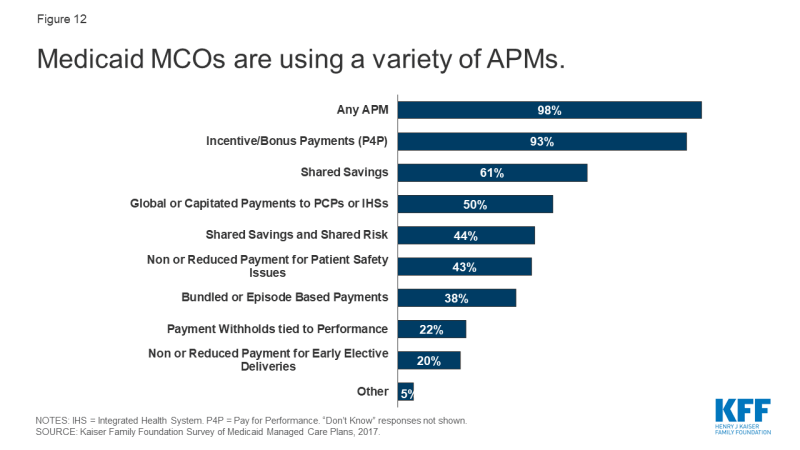 Figure 12: Medicaid MCOs are using a variety of APMs.

With Medicaid managed care delivery systems operating in 41 states as of FY 2020, many states are leveraging MCO contracts to promote strategies to address social determinants of health. Over three-quarters of the 41 MCO states as of FY 2020 (35 states) are leveraging Medicaid MCO contracts to promote at least one strategy to address social determinants of health (Figure 13). As of FY 2020, about three-quarters of MCO states require MCOs to screen enrollees for social needs (31 states); provide enrollees with referrals to social services (31 states); or partner with community-based organizations (28 states).  Almost half of MCO states require MCOs to employ community health workers (CHWs) or other non-traditional health workers (19 states). KFF’s 2017 survey of Medicaid managed care plans found that a majority of plans were actively working to help beneficiaries connect with social services related to housing, nutrition, education, or employment (Figure 14). 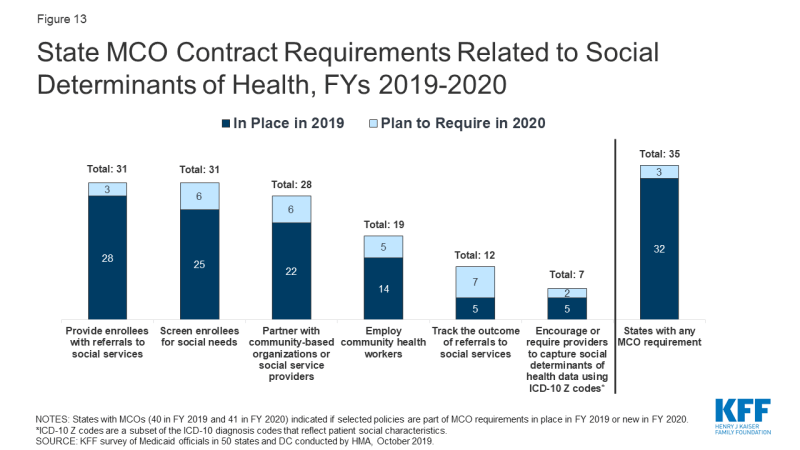 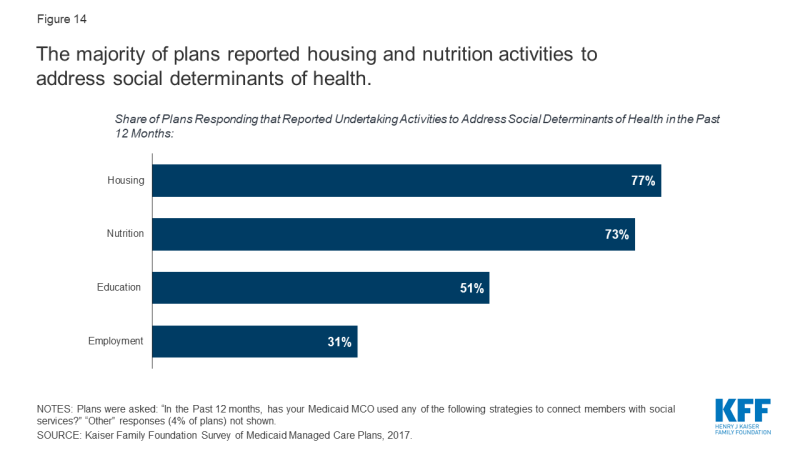 Figure 14: The majority of plans reported housing and nutrition activities to address social determinants of health.