At the ten year mark since the passage of the Affordable Care Act (ACA), a substantial body of research has investigated effects of the Medicaid expansion on coverage; access to care and related measures (including utilization, quality of care and health outcomes, provider capacity, and affordability and financial security); and various economic measures. This issue brief summarizes findings from 404 studies (including 80 newly included since the last update of this analysis) of the impact of state Medicaid expansions under the ACA published beginning in January 2014 (when the coverage provisions of the ACA went into effect) and updates earlier versions of this brief with studies through January 2020.1

This brief groups outcomes into three broad categories: coverage, access, and economic measures. Research indicates that the expansion is linked to gains in coverage; improvements in access, financial security, and some measures of health status/outcomes; and economic benefits for states and providers (Figure 1). 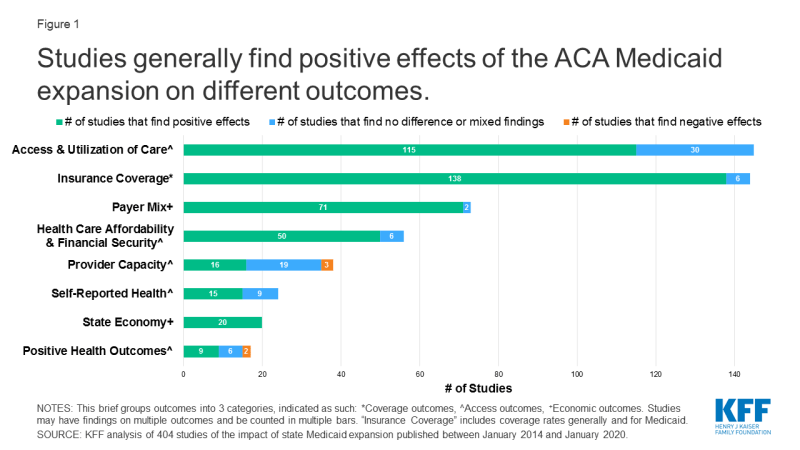 Studies included in this review may include multiple findings across multiple categories. For example, studies that point to increased coverage may also include findings related to access, outcomes, or economic metrics. While most early studies focused on expansion’s impact on coverage and economic measures, over time studies have increasingly focused on measures related to access to care (Figure 2). 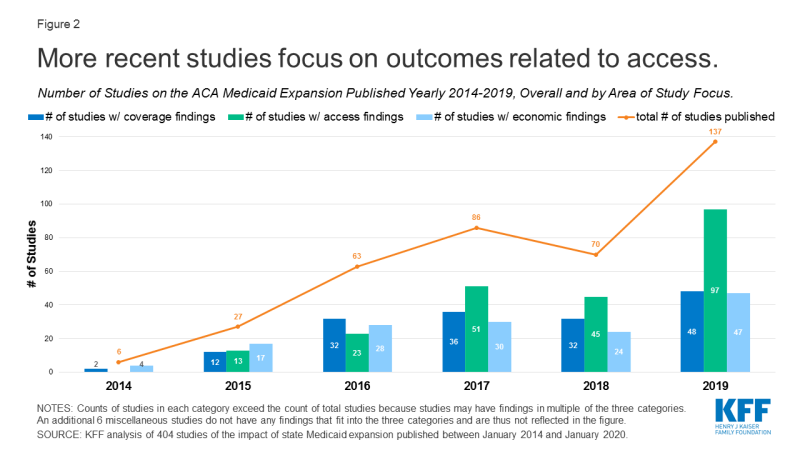 Findings related to coverage, access, and economic measures are discussed in detail in the text of this brief and are also summarized below:

Coverage: Studies show that Medicaid expansion states experienced significant coverage gains and reductions in uninsured rates among the low-income population broadly and within specific vulnerable populations. States that implemented the expansion with a waiver have seen coverage gains, but some waiver provisions appear to compromise coverage.

Access to care and related measures: Most research demonstrates that Medicaid expansion has improved access to care, utilization of services, the affordability of care, and financial security among the low-income population. Studies show improved self-reported health following expansion and an association between expansion and certain positive health outcomes. A small subset of study findings showed no effects of expansion on certain specific measures within these access-related categories. Findings on expansion’s effect on provider capacity are mixed, with studies showing increases, decreases, or no effects on measures like appointment availability or wait times.

Economic measures: Analyses find effects of expansion on numerous economic outcomes, including state budget savings, revenue gains, and overall economic growth. Multiple studies suggest that expansion can result in state savings by offsetting state costs in other areas. The federal government covered 100% of the cost of the expansion in the early years of the ACA and will cover 90% beginning in 2020. There is limited research examining the fiscal effects of the Medicaid expansion at the federal level. Additional studies show that Medicaid expansions result in reductions in uncompensated care costs for hospitals and clinics, and a growing number of studies show an association between expansion and gains in employment as well as growth in the labor market (with a minority of studies showing neutral effects in this area).

More recent studies: Recently published studies newly included in this analysis from July 2019 through January 2020 support earlier findings while using the additional years of experience with expansion to deepen findings in many areas, including expansion’s effects on health outcomes, access to services and medications for behavioral health and other needs, providers’ financial stability, and employment. Some recent analyses that include outcomes beyond those typically examined in Medicaid expansion research show that expansion is associated with decreased mortality overall and for certain specific conditions; reductions in rates of food insecurity, poverty, and home evictions; and improvements in measures of self-reported health and healthy behaviors.

Looking back and looking ahead: Looking back on 10 years since the ACA has been enacted shows that the Medicaid expansion has expanded coverage and led to increases in access and utilization to health care services, improvements in financial security and positive net effects for state budgets and revenues. This analysis may help inform states still debating whether to adopt the expansion. Future studies will continue to examine the economic implications of the expansion as the state share of costs remains constant at 10 percent. A looming economic downturn will also test how the Medicaid expansion affects coverage and state budgets. Looking ahead, while additional states may expand eligibility under the ACA, the changing landscape of Medicaid demonstration activity could limit the reach of the Medicaid expansion as envisioned under the law. For example, the administration issued new guidance that would allow states to cover certain adults (including the expansion population) through new demonstrations with eligibility restrictions and not apply other Medicaid rules in exchange for capped financing. In addition, continued efforts from the administration to conduct intense oversight and change the rules on Medicaid enrollment and financing, as well as litigation efforts to repeal the entire ACA keep the law in the spotlight and highlight future challenges. The outcome of the next election could bring significant changes to the ACA, including the Medicaid expansion.