The Trump Administration and Republican leaders in Congress have called for fundamental changes in Medicaid financing that would limit federal financing for Medicaid through a block grant or per capita cap. Such changes may be tied to offers of increased flexibility to states to manage their programs within a more limited financing structure. Which federal standards would remain in place and what increased flexibility might be provided to states would have significant implications. To help inform discussion around increased flexibility, this brief provides an overview of current federal standards and state options in Medicaid and how states have responded to these options in four key areas: eligibility, benefits, premiums and cost sharing, and provider payments and delivery systems.

Today, states operate their program within federal standards and a wide range of state options in exchange for federal matching funds that are provided with no limit. Medicaid is jointly financed by the federal government and states, with the federal government providing federal matching funds for allowable state Medicaid spending on an open-ended basis. In exchange for the federal funds, states must meet federal standards that reflect the program’s role covering a low-income population with limited resources and often complex health needs. The federal standards largely focus on requiring states to cover certain core groups, such as poor children and pregnant women, as well as certain core benefits. However, states can choose to cover additional groups and benefits and have wide latitude over many aspects of the program, particularly how they pay providers and structure their delivery systems. Moreover, states can use Section 1115 waiver authority to vary from the federal standards and state options to address different priorities and emerging issues.

Each state Medicaid program is unique, reflecting states’ use of existing program flexibility and waiver authority to design their programs to meet their specific needs and priorities. The programs vary widely in terms of who is eligible, what benefits are covered, what premiums and cost sharing are charged, and how providers are paid and care is delivered (Figure 1). Over time, many states have expanded Medicaid to reach a greater share of their low-income population through both targeted and broad expansions. States also have used program flexibility to continually evolve and transform how they pay for and deliver care. Further, during economic downturns, states have used options to cut provider rates and restrict benefits to control Medicaid spending. 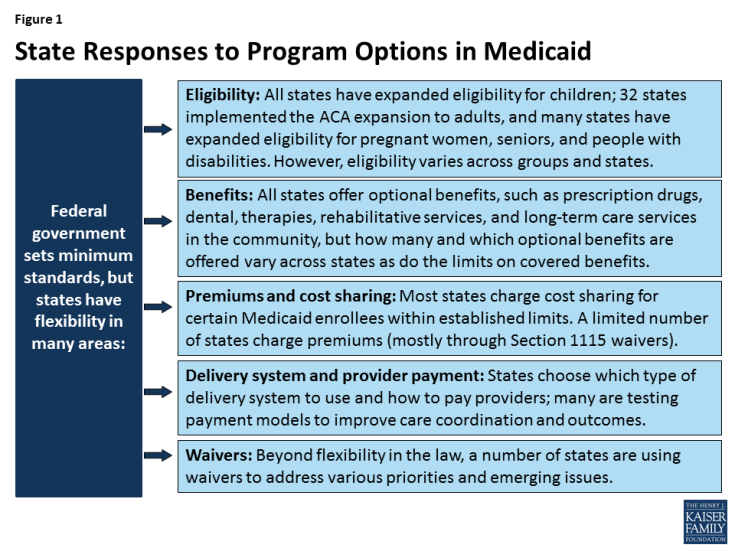 As proposals to restructure federal Medicaid financing develop, it will be important to examine what additional flexibilities they would provide to states and what standards, accountability and enrollee protections would remain for states to access federal funds. As noted, states have broad flexibility over many aspects of their programs and can gain increased flexibility under Section 1115 waiver authority. What additional flexibilities would be provided beyond these options under such proposals would have implications for states, enrollees, and providers. What federal standards would remain in place will affect the extent of accountability for the federal investment in the program and the scope of nationwide protections available for enrollees. Additionally, how such proposals would address existing program variation in establishing base levels for the caps will be key, including variation as a result of 32 states, including DC, adopting the ACA expansion. Setting the caps based on current spending could lock historical state choices and program variation in place potentially rewarding states with higher historic spending and creating “winners” or “losers” across states.