Medicaid provides health coverage and long-term care services and supports for low-income individuals and families, covering more than 76 million Americans and accounting for about 1 in 6 dollars spent on health care.1 Medicaid is a large source of spending in both state and federal budgets, making program integrity efforts important to prevent waste, fraud, and abuse and ensure appropriate use of taxpayer dollars. Recent audits and improper payment reports have brought program integrity issues back to the forefront. This brief explains what program integrity is, recent efforts at the Centers for Medicare and Medicaid Services (CMS) to address program integrity, and current and emerging issues. It finds:

CMS released Payment Error Rate Measurement (PERM) estimates for Medicaid that include eligibility determinations for the first time since implementation of the Affordable Care Act (ACA). The PERM estimate is based on reviews of fee-for-service and managed care claims and eligibility determinations. The eligibility component was suspended for several years as states implemented the ACA and was reintegrated into the 2019 rate. The national Medicaid improper payment rate for 2019 is 14.90% or $57.36 billion.2 A separate HHS report shows a 16.3% error rate for fee-for-service claims, an 8.36% error rate for eligibility, and a 0.12% error rate for the managed care claims (Figure 1). HHS reports that 77% of improper payments were due to missing information and/or states not following the appropriate process for enrolling providers and/or determining beneficiary eligibility. These payments do not necessarily represent payments for ineligible providers or beneficiaries, since they may have been payable if the missing information had been on the claim and/or the state had complied with requirements. It finds 8% of improper payments were for ineligible providers or beneficiaries. 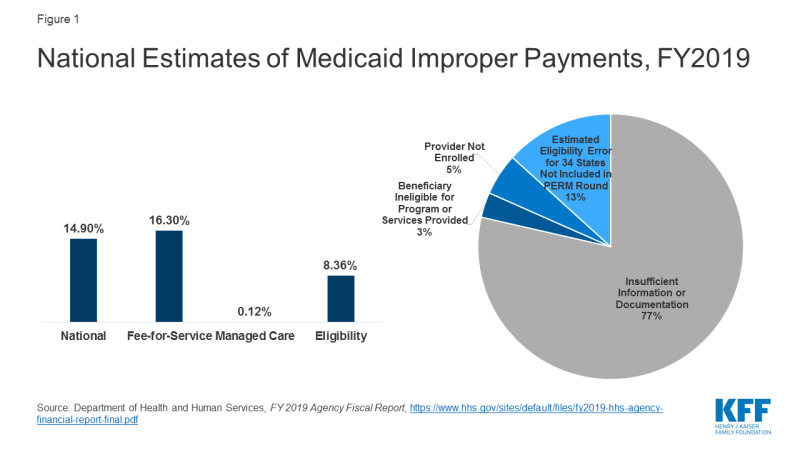 Through administrative actions related to program integrity, CMS is making changes that could have broader implications for eligibility and spending. As noted, CMS guidance and planned changes to eligibility rules to tighten standards for verification could restrict enrollment in the program. Further, through guidance and regulation, CMS has heightened oversight of state claiming for the ACA expansion, increased oversight of and made changes to state claiming for federal funds under Section 1115 waivers, and proposed changes to supplemental payments. These changes could reduce federal spending on the program and limit states ability to access federal matching funds. In some cases, reduced federal spending may be tied to additional oversight to ensure states are complying with current rules, while in other cases the reductions may reflect CMS changes or proposed changes in policies.