Immigrants, particularly those who do not speak English well or do not have legal resident status in the U.S., can be particularly vulnerable to the effects of natural disasters and their aftermath for many reasons, including that they may lack the literacy necessary to navigate the systems in place to help people affected, they may be ineligible for benefits, or they may be hesitant to seek help for fear of exposing their own or a family member’s legal status. 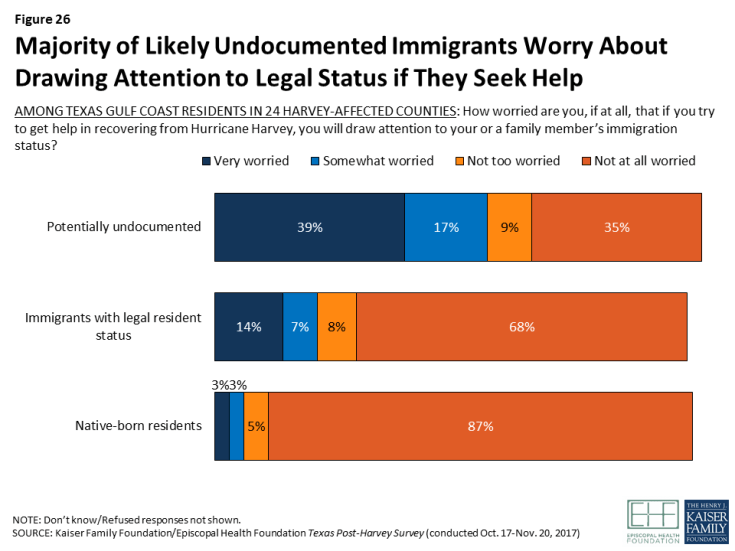 The survey used questions to determine the likely immigration status of respondents by asking those who were born outside the U.S. whether they were a permanent resident (i.e. had a green card) when they came to the U.S. or if their status had been changed to permanent resident since arriving. Overall, 12 percent of residents in the 24-county area, including 27 percent of Hispanics, say they have not been granted permanent resident status, indicating that they are likely to be undocumented immigrants. Of this group, seven in ten (73 percent) were directly affected by Harvey, including two-thirds (68 percent) who experienced a disruption in their employment and three in ten who say their home was damaged.

Among those who are likely to be undocumented immigrants, a majority says they are very worried (39 percent) or somewhat worried (17 percent) that if they try to get help in recovering from the hurricane, they will draw attention to their own immigration status or that of a family member. Even among immigrants who are legal residents, about one in five (21 percent) worry about drawing attention to someone else’s status.

Language issues also presented a barrier for some individuals, regardless of immigration status. Among Hispanics who completed the survey in Spanish (42 percent of all Hispanics), three in ten say it was very or somewhat difficult to find the information they needed in Spanish when trying to get recovery help, while four in ten say it was easy and another quarter say they did not seek help. 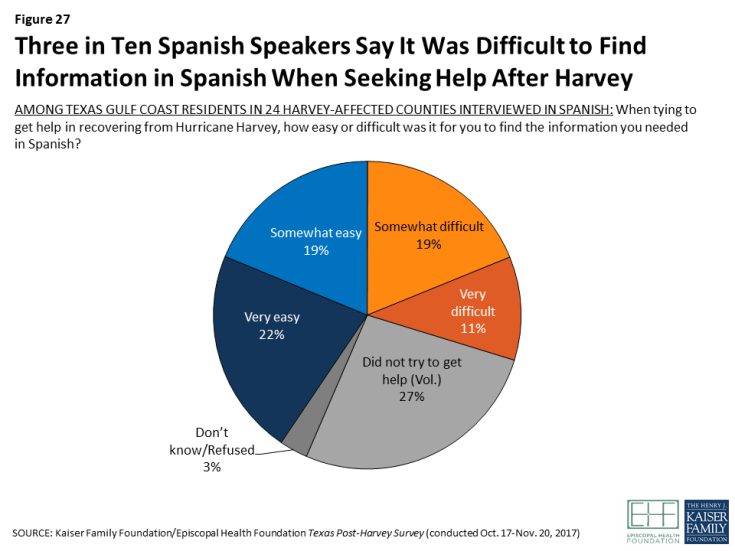 Figure 27: Three in Ten Spanish Speakers Say It Was Difficult to Find Information in Spanish When Seeking Help After Harvey

Two of the focus groups in Houston were conducted in Spanish, including one with individuals who identified as undocumented immigrants. Most Spanish speakers said that when seeking information or help since the hurricane, they were able to find people to help them in Spanish. However, most also felt that it took longer to get help in Spanish than in English, and that Hispanics were getting less help than others. For those who are undocumented, some said they did not want to seek assistance because they expected to be asked for a social security number, or they feared being reported to immigration. Most turned to informal networks (friends, families, and neighbors) for help rather than official sources.

“They check it [identification] for everything. Even for giving you help, they want your social security. They want to look at your taxes.” – 45-year-old undocumented Hispanic male, Houston

“My sister-in-law, they were gonna cut off her power and the company said to call an organization. First thing they told her is, ‘If you don’t have a Texas ID, we cannot help you.’” –42-year-old undocumented Hispanic female, Houston