Section 3: What Do Residents See as the Biggest Priorities for Recovery, and How Do They Rate the Local, State, and Federal Response?

When asked about priorities for rebuilding and recovery in their area, Texas Gulf Coast residents – including those who were affected by the hurricane and those who weren’t – identify many areas where more resources are needed, with the largest focus being on financial help and housing for those in need. The highest-ranking priority overall is getting financial help to people who need it; 64 percent say more resources are necessary in this area and when forced to choose, 19 percent pick it as the top priority. A close second is rebuilding destroyed homes (63 percent say more resources are necessary and 17 percent choose it as the top priority). Ranking third and fourth are making more affordable permanent and temporary housing available, with nearly six in ten saying more resources are necessary and 12 percent choosing each as the top priority. About half also say more resources are needed in cleaning up pollutants released by the flooding (49 percent), removing trash and debris (49 percent), and helping small businesses affected by the storm (48 percent), while about four in ten say the same about repairing damaged schools (42 percent), getting mental health services to those who need them (42 percent), and repairing roads and highways (40 percent). Ranking of priorities is similar when looking at responses only among those who were directly affected by the storm. 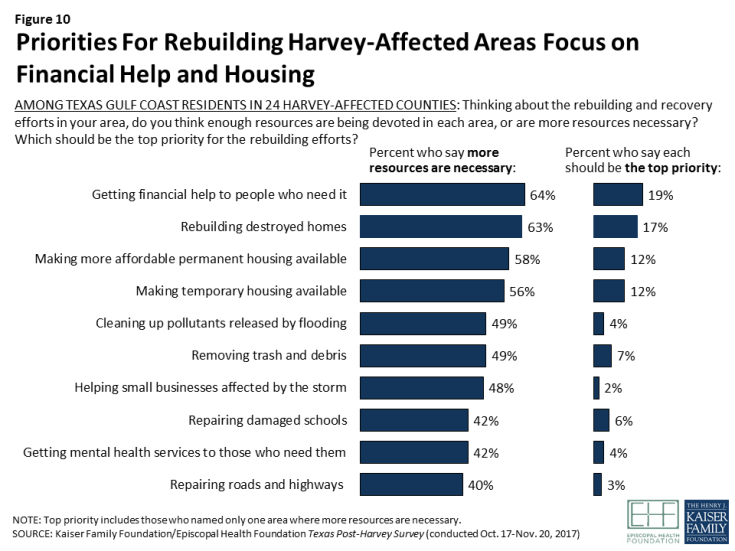 Looking at residents overall – including those who were affected by the storm and those who weren’t – most give their local, county, and state governments positive marks for the job they’re doing responding to Hurricane Harvey, with about seven in ten saying each is doing an excellent, very good, or good job. Ratings are more divided when it comes to the U.S. Congress, with 46 percent saying they’re doing at least a good job and 43 percent saying they’re doing a fair or poor job. Ratings are more negative for President Trump, with half (49 percent) saying the president is doing a fair or poor job responding to the hurricane and about four in ten (43 percent) giving him positive ratings. 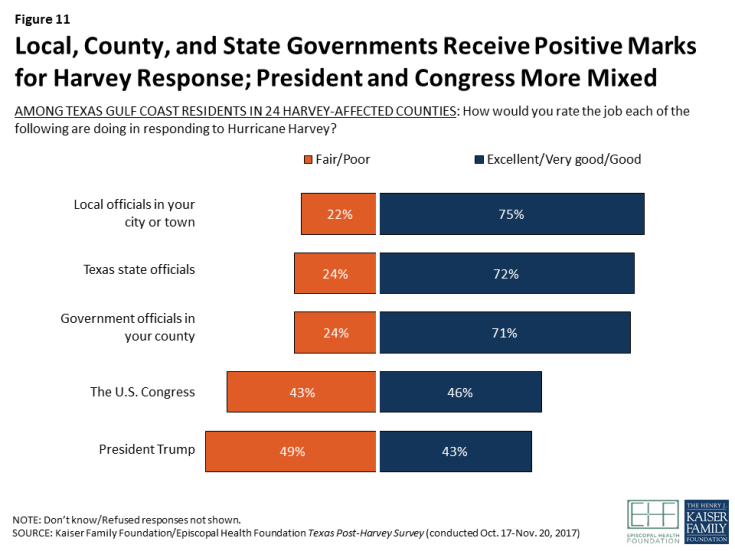 Among those who were directly affected by the storm, views of the government’s response are similar, but tend to lean more negative than among the public overall. In particular, affected residents living in the Golden Triangle area, the counties surrounding Harris County, are more likely than those living in Harris and the Coastal counties to say each level of government is doing a fair or poor job responding to the hurricane. For example, about four in ten residents of the Golden Triangle and the counties surrounding Harris say that government officials in their county are doing a fair or poor job responding to Harvey, compared with about a quarter in Harris County and the Coastal counties. The exception to this pattern is in ratings of President Trump, whom Harris County residents rate more negatively than others.

Overall, about six in ten residents – including majorities in each of the four geographic areas – say they are very or somewhat confident that the money being spent on hurricane relief in Texas will benefit the people who need it most, while 38 percent say they are not too or not at all confident. However, those who were directly affected by the storm are more likely than those who were not affected to say they are not confident that money spent on relief will reach those who need it most (42 percent versus 30 percent, rising to nearly half – 46 percent – among those whose homes had major damage or were destroyed). Those who remain displaced from their homes (52 percent), those who say their FEMA application was denied (56 percent), those who say they or a family member have a health condition that is new or worse as a result of the storm (58 percent), and those who feel their own mental health is worse (59 percent) are particularly likely to lack confidence that funds will reach the people who need them most. 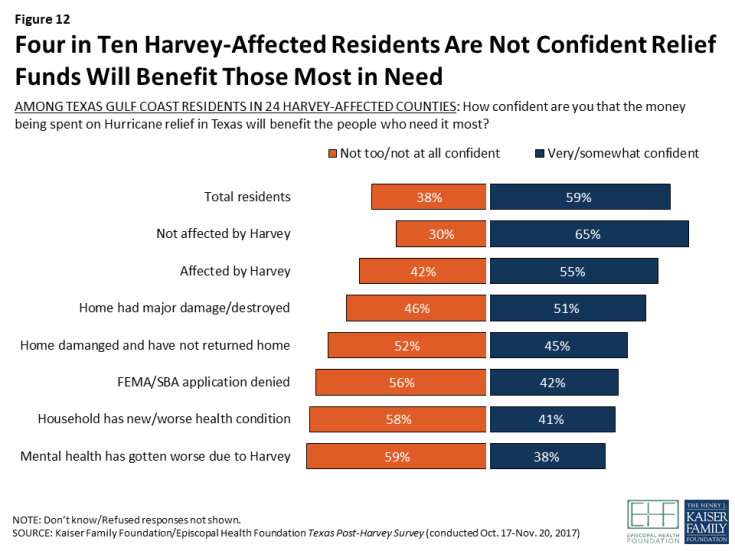 Figure 12: Four in Ten Harvey-Affected Residents Are Not Confident Relief Funds Will Benefit Those Most in Need

In each of the five focus groups, when asked about the channels for receiving help after the hurricane, participants raised concerns about some people abusing the system and getting help they don’t need, while others who really need help are going without it. There was some tension in the groups between the need to verify information from people applying for aid to make sure abuse doesn’t happen, and wanting the process to be simpler so people who need help can get it faster.

“I’ve dealt with this in Wisconsin. I’ve dealt with FEMA like on three different occasions. It was nothing near as dramatic as I dealt with here. And I had less problems there than I had here. I just don’t get it. They can pick and choose. Is it cherry-picking? How do they do it? Do they cherry-pick, just like with Red Cross?” – 40-year-old Black female, Houston

“So many millions of dollars – they said that on TV. They don’t know where the money is, where the help is. The economic help. It’s not gonna reach us. It’s gonna reach those who have the money, who have insurance.” – 45-year-old undocumented Hispanic male, Houston

“I know people that came from Louisiana in 2005 after Katrina. They were living large. They were exchanging FEMA checks…and getting stuff they didn’t need.” – 42-year-old Hispanic male, Houston

Section 2: Are Affected Residents Getting the Help They Need? Section 4: More Details on Housing and Transportation Issues