Employment Disruption and Loss of Income

While damage to homes and other property was surely the most visible impact of Hurricane Harvey, interruptions in employment were a common occurrence and caused financial disruptions for many residents, particularly when combined with the cost of repairing damage to their home or repairing or replacing a damaged vehicle. Overall, nearly half (46 percent) of residents say they experienced some type of job or income loss as a result of Harvey, including 12 percent who say they or a family member was laid off or lost a job, 32 percent who say someone in their household had their hours cut back at work, and 32 percent who say they experienced another loss of income, such as from a small business or unpaid missed days of work.

Job and income effects were evenly distributed geographically for the most part, but were much more commonly reported among Hispanic (65 percent) and Black residents (46 percent) compared with whites (31 percent), and among those with lower incomes compared to those with higher incomes. 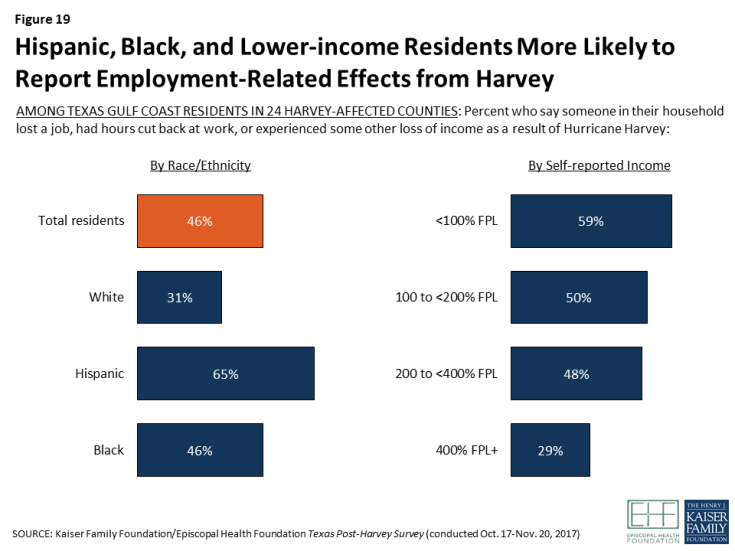 On the other hand, some residents report taking on extra work since the hurricane; three in ten residents affected by the storm say that since Harvey, they or another family member in their household has taken on an extra job or worked more hours to make ends meet.

Focus group participants reported a range of employment disruptions in the wake of Hurricane Harvey. For many, the effects were temporary, while others were still struggling to find work three months after the storm. Many participants were self-employed or contract or hourly workers who lost several weeks of work due to the storm, but had since returned to work. Some reported that they still had less work than they did before Harvey, while others said their work level returned to normal after several weeks. A few who work in construction or home repairs said that after a lull, they now have more work than they did before the storm. On the other hand, a few participants – particularly in the Beaumont groups – reported that they had lost their jobs entirely and were still without work several months after the hurricane.

“I work installing alarm systems. It was touch and go, like everyone said, for about almost a month because I didn’t have places to go to, then the traffic was so bad. We were doing 10% of what we normally do on a day because we couldn’t get around. It was slow because in this industry you start getting clients slowly. You start putting clients on the line, and by the time they’re ready to go, then that’s when you start doing installations…I would say 5-6 weeks before I was really back into it.” – 38-year-old Hispanic male, Houston

“I’m still without a job. My whole job was destroyed. I worked at a library, and they don’t know when it will be open. I’m still looking for a job. I filed for unemployment but it will stop next week. I need to find work before next week.” – 24-year-old Black female, Beaumont

While insurance payments and FEMA assistance may be a financial help for some, many residents either don’t have access to these benefits or don’t expect them to cover a major portion of their financial losses. Among all those who were affected by the storm, just one in five (22 percent) expect that insurance and other financial assistance they receive will cover most of the financial losses they experienced. Three in ten (29 percent) say they expect it to cover just some of their losses, and 42 percent say they expect none of their losses to be covered.

Similarly, among those who had a vehicle damaged, half say they expect insurance to cover none of the cost of repairing or replacing their vehicle, while 27 percent expect insurance to cover most of the cost and one in five say it will cover just some. Lower-income adults are much less likely than those with higher incomes to say insurance will cover most of the cost of repairing or replacing a vehicle (19 percent of those who report incomes below 200 percent FPL versus 4o percent of those with higher incomes). 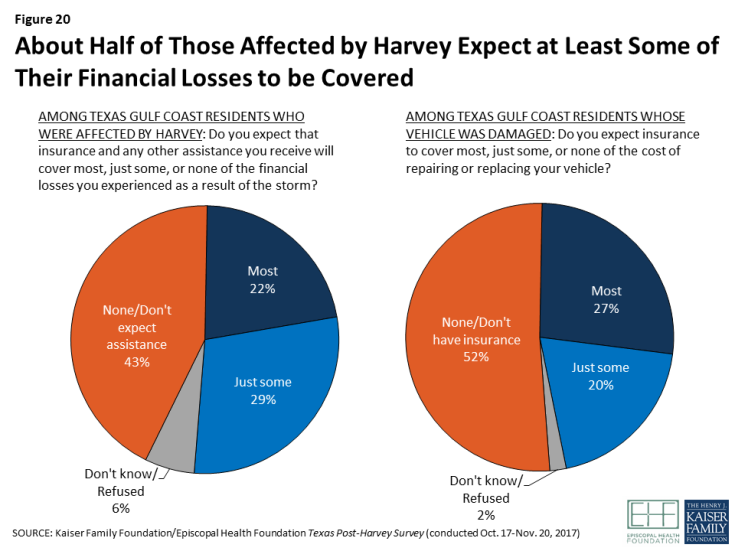 Figure 20: About Half of Those Affected by Harvey Expect at Least Some of Their Financial Losses to be Covered

The financial impacts of Hurricane Harvey have led to serious consequences for some residents who were affected by the storm, particularly among Black and Hispanic residents and those with lower incomes. For example, three in ten (29 percent) affected residents – rising to 36 percent of Hispanics and 40 percent of those who report incomes below the poverty level – say that since Harvey, they have fallen behind in paying their rent or mortgage. One quarter of affected residents, including 37 percent of Black residents, say they have had problems paying for food since the storm. In addition, about four in ten affected residents say that since the hurricane, they have borrowed money from friends or relatives (39 percent), and one in eight (13 percent) say they have borrowed from a payday lender to make ends meet.

It’s worth noting that the financial circumstances of many of those who were affected by Harvey were tenuous even before the hurricane, and few report having many financial resources to fall back on. About half (48 percent) of affected residents say they have no savings whatsoever, and another quarter (24 percent) say that if they lost their job or other source of income, their savings would be exhausted in less than 6 months. This level of financial instability is much more common among Black and Hispanic residents compared with whites, and among those with lower incomes compared with higher-income individuals. 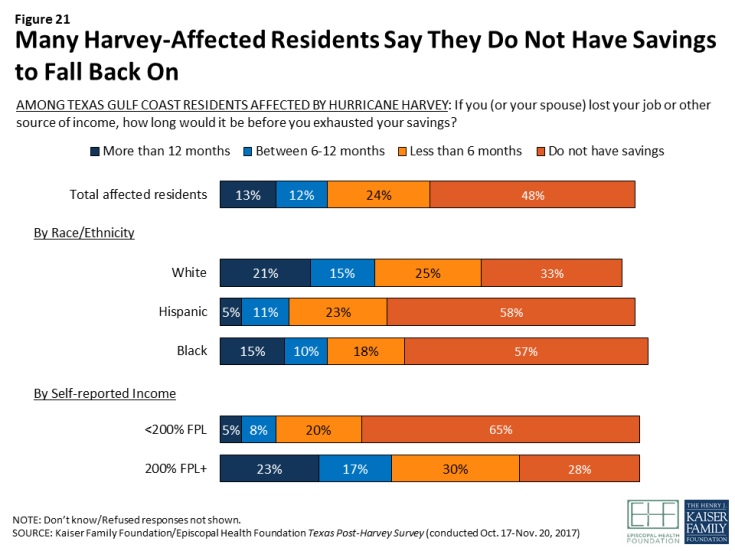 Figure 21: Many Harvey-Affected Residents Say They Do Not Have Savings to Fall Back On

Most focus group participants we spoke with were feeling financially stressed. Many were living paycheck-to-paycheck before Hurricane Harvey hit, and did not have the means to absorb the financial hit of missing several weeks of work because of the storm. They feel behind on their bills and prioritize financial help to allow them to catch up. Some are still struggling to pay for food and basic items like clothing for their children. For many (particularly among Hispanics), there was pride associated with working one’s own way back from a bad situation and not taking “handouts.” Many thought of themselves as entrepreneurs and didn’t want something for free, but would like a boost to help get their business going or to find more work.

“Yes, we’re still catching up. We’re still catching up with our bills. We’re not at where we were at before. And now you’re having to limit a lot… My son wanted a pizza. They’re charging me like $5 for a pizza I pay $1 for at the store…I was trying to save a few bucks that I do have, but for my son of course I’m going to do it for him. I spent that $5 even though we were not going to have enough to eat again for the next couple days.” – 42-year-old Hispanic female, Houston

“The stress we get is because we don’t have the money to fix things, so the help to cope with stress will be economic help actually.” – 37-year-old undocumented Hispanic female, Houston

“[Asked what type of help you need] Financing to help you get through until the insurance money comes. For a lot of people, by the time the insurance money comes you had to take money from so many other places, borrow so much money from family and friends. Some of that money you have to use just to get even on what you got behind on.” – 64-year-old Black male, Beaumont