Section 2: Are Affected Residents Getting the Help They Need? 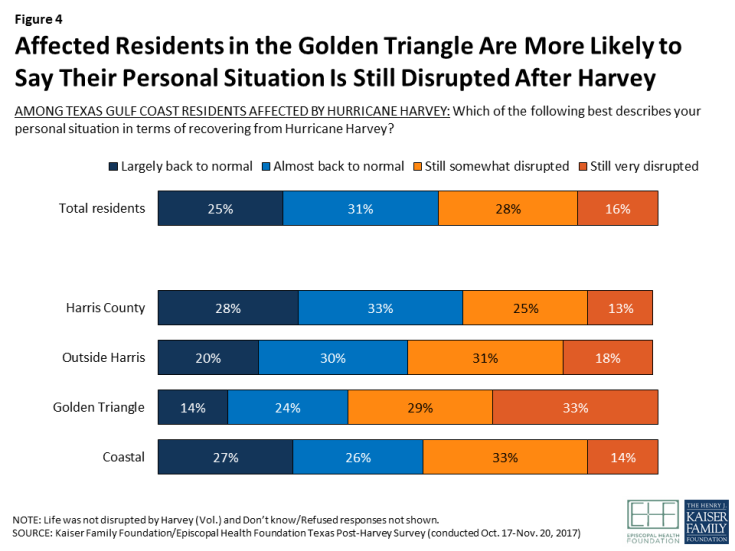 Figure 4: Affected Residents in the Golden Triangle Are More Likely to Say Their Personal Situation Is Still Disrupted After Harvey

When asked to name in their own words the biggest challenge facing their family in recovering from Hurricane Harvey, affected residents focus on basic needs like housing and financial stability. One-third (33 percent) say their biggest challenges are financial, including general financial problems (11 percent), making up lost wages (8 percent), and problems keeping up with bills (6 percent). Another third (32 percent) mention housing-related challenges, including 16 percent who mention home repairs and 5 percent who mention trying to find a new living situation. Eight percent mention transportation issues including the need to repair or replace a vehicle, five percent mention health challenges, including mental health or stress, and four percent name family-related issues. 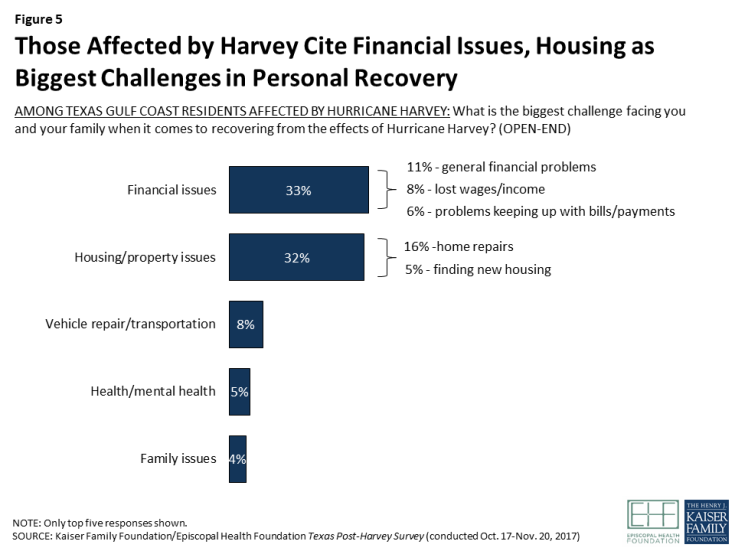 The survey shows there is room for progress in getting needed help to affected residents. Nearly half (45 percent) of those who were affected in terms of property damage or income loss say they are getting the help they need to recover from Hurricane Harvey, while an equal share (45 percent) say they are not. Here, too, progress is uneven, with Black residents and those with lower incomes more likely to say they’re not getting the help they need. 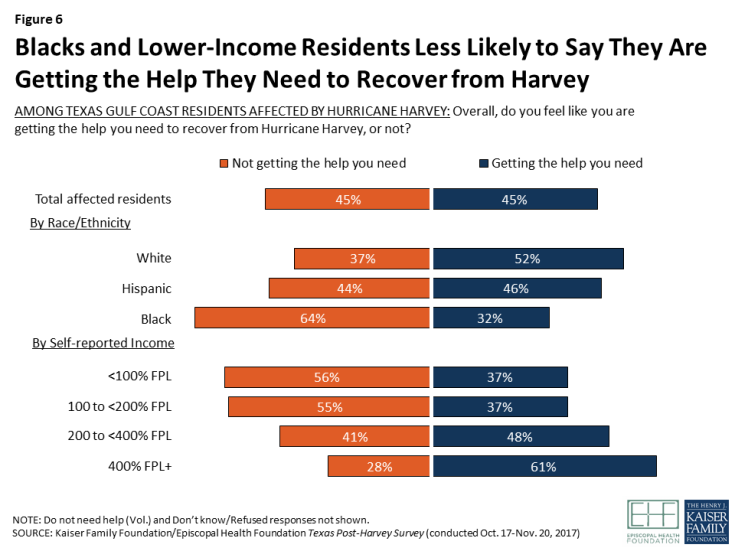 Figure 6: Blacks and Lower-Income Residents Less Likely to Say They Are Getting the Help They Need to Recover from Harvey

One major source of help for people affected by natural disasters in the U.S. is disaster assistance provided by the Federal Emergency Management Agency (FEMA) and low-interest loans provided by the U.S. Small Business Administration (SBA). Overall, about four in ten (44 percent) residents who were affected by Hurricane Harvey, including 59 percent of those whose homes were damaged, say they have applied for assistance from FEMA or the SBA. Among those who applied, one quarter (26 percent) say their application has been approved and one-third (33 percent) say it was denied. Another 19 percent say their application is still pending, and 16 percent are not sure of the status.

Among those who applied for assistance from FEMA or the SBA, those who report incomes at least four times FPL (45 percent) and those whose home had major damage or was destroyed (36 percent) are more likely to say their application was approved. In addition, white and Hispanic residents who applied for assistance are more likely than Black residents who applied to say their application was approved (34 percent, 28 percent, and 13 percent, respectively). 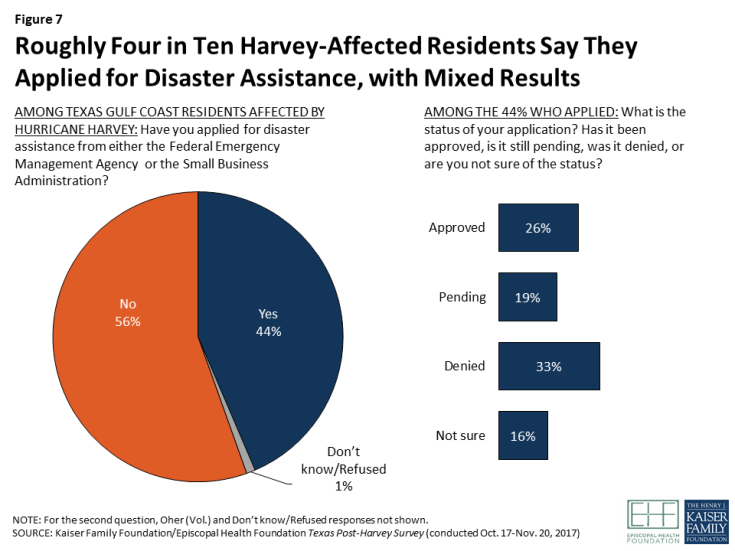 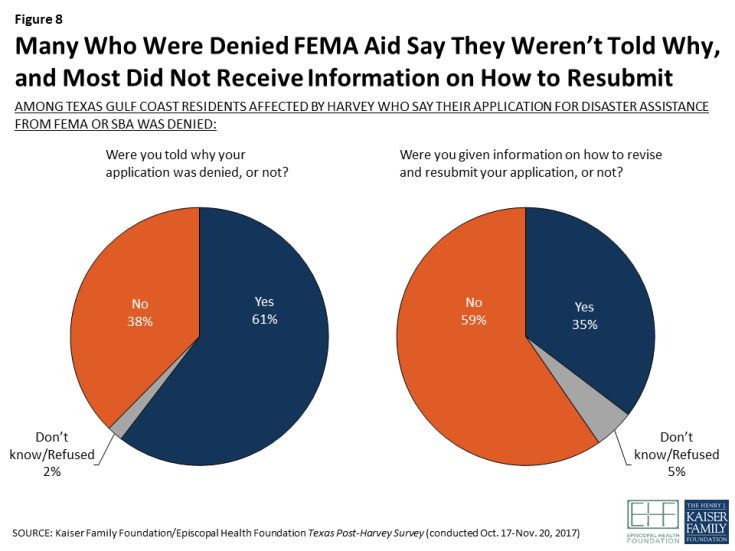 Figure 8: Many Who Were Denied FEMA Aid Say They Weren’t Told Why, and Most Did Not Receive Information on How to Resubmit

When those who did not apply for FEMA assistance were asked why they did not apply, most (63 percent) said they had only minor damage or did not feel they needed the help. However, some said they lacked information about how to apply (12 percent), they didn’t think they would qualify (8 percent), or they thought it would be too much hassle or too difficult to go through the process (5 percent).

The focus group discussions indicated that there is a lot of confusion and misinformation among affected residents about the different ways to get assistance. Participants were frustrated by the bureaucracy of applying for help, which they don’t feel they have time for while taking care of their families, trying to find work, and rebuilding their homes (a few participants said it took at least 3 hours of waiting to speak with a live operator on a FEMA call). There was also the perception that FEMA adjusters were temporary hires, not well-trained or familiar with the affected communities, and that your likelihood of getting approved for assistance depended on the particular adjuster who visited your home.

In the Hispanic groups in particular, there was a resistance to taking out loans that they’d be repaying for many years. Many thought that SBA loans would come with high interest rates. Others were frustrated that in order to get an SBA loan you need to have money in the bank and a minimum credit score, which many of them did not have, and some undocumented immigrants mentioned the need to have a social security number to apply. These discussions suggest that people could benefit from navigators to understand the different sources of help (FEMA, SBA, Red Cross and other charities) and to navigate the application and appeals process.

“And then the FEMA lines are, you can’t even get through. Then you have to go through the whole process with FEMA. They may still come out and, just like [indicates another focus group participant], I was denied just like him. Right now, even if I want to try and go through a whole process to even fight with FEMA, I have to go through a whole entire appeal. My roof is still…there’s still big bubbles in the roof.” – 40-year-old Black female, Houston

“They came to my house and they walked [around] my house and saw the damage. And they gave me $364.29. I know people who didn’t have as much damage as I had that got thousands… I think it just all depends on the person that came to your house. The man that came to my house, he was like giving us real serious. He wasn’t caring, he wasn’t compassionate. He was in and out. But I have a friend that had a lady and she was very nice. She came and walked through the house. She was compassionate. She didn’t even have as much damage as I did and she got like $2500.” – 59-year-old Black female, Beaumont

“There’s a certain way you have to answer it [the application for assistance]. If you answer one question [ wrong ], even if you misunderstood or didn’t understand it or comprehend the question, they deny you.” – 29-year-old Hispanic male, Beaumont

“If FEMA was referring us to the Small Business Loan, why do have to have all this credit score and amount of money saved up? We could go through a regular bank.” – 40-year-old Black female, Houston

Areas where Additional Help is Needed

When asked about the different types of help they may have received from government agencies, local charities, or other organizations, about a third of affected residents (35 percent) say they’ve gotten help paying for food, including half (51 percent) of those living in the Coastal region and 41 percent living in the Golden Triangle area. Much smaller shares of affected residents say they’ve gotten help paying for housing or utilities (9 percent), paying for health care (7 percent), finding employment (5 percent), or accessing mental health services (5 percent). 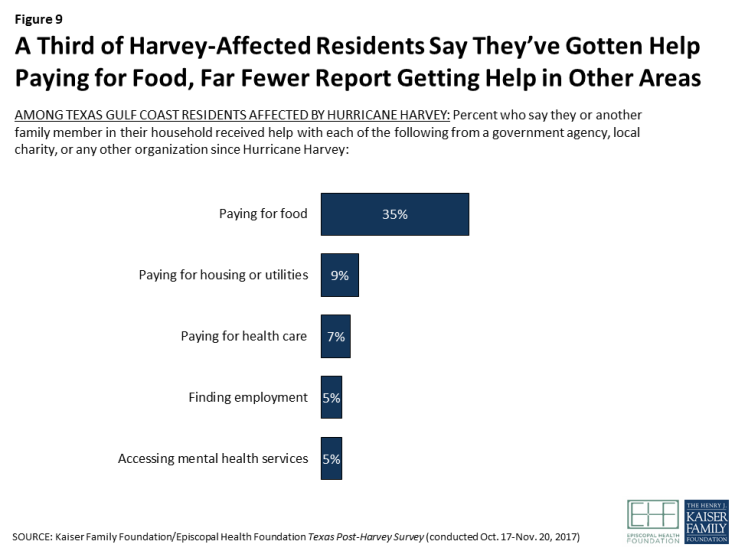 Figure 9: A Third of Harvey-Affected Residents Say They’ve Gotten Help Paying for Food, Far Fewer Report Getting Help in Other Are

Section 1: The Big Picture: Who Was Affected by Harvey and How? Section 3: What Do Residents See as the Biggest Priorities for Recovery, and How Do They Rate the Local, State, and Federal Response?