Below the surface, and often related to the housing and financial problems they are facing, some residents report problems with their physical and/or mental health as a result of their experiences with Hurricane Harvey. Overall, one in eight residents (13 percent) say they or another family member in their household has a health condition that is new or has gotten worse as a result of the storm. Those who were affected by home damage or income loss are more likely to report a new or worsened health condition (17 percent), but still a small share of those who were not affected (4 percent) report such a condition. Among those who were affected, Black and residents and those living in the Golden Triangle are somewhat more likely to report a decline in the health of someone in their household (25 percent each).

Among those who report that someone in their household has a new or worsened health condition, 38 percent mention a respiratory condition such as asthma, allergies, or cough, and 20 percent mention mental health issues including anxiety, depression, and general stress. 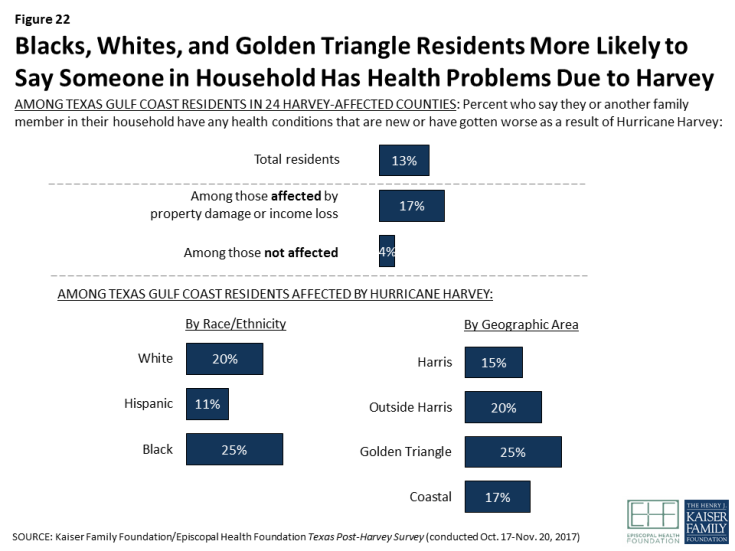 Figure 22: Blacks, Whites, and Golden Triangle Residents More Likely to Say Someone in Household Has Health Problems Due to Harvey

While Hurricane Harvey may have led to new or worsened health problems for some residents, it’s worth noting that many affected residents lacked consistent access to health insurance and health care providers even before the storm. Four in ten (39 percent) of those who were affected by Harvey say that they do not have health insurance. Reported lack of coverage is highest among Hispanic (53 percent) and Black residents (39 percent) affected by the storm, as well as those who report incomes below 200 percent of the poverty level (53 percent).

In addition, three in ten Harvey-affected residents (31 percent) say they have no usual place they go for care when they are sick or need advice about their health, or that their usual source of care is a hospital emergency room. This is highest among affected Black (39 percent) Hispanic residents (38 percent) and those with self-reported incomes below 200 percent of poverty (40 percent). 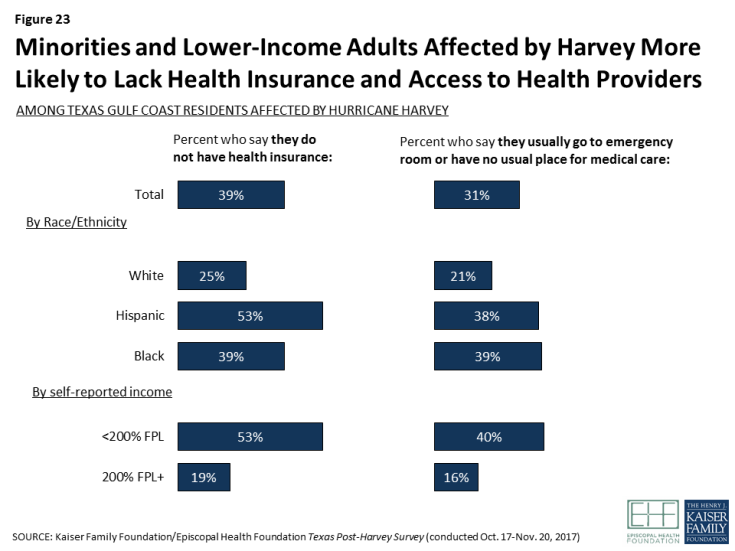 Since Hurricane Harvey, some residents report skipping or postponing medical care or having problems paying medical bills, with much higher rates among those who have someone in their household with a new or worse health condition resulting from the storm. For example, 36 percent of those who say someone in their household has a new or worse health condition due to Harvey say that they or another family member has put off or postponed getting needed health care since the storm, 32 percent say a family member has skipped dental care or check-ups, and 31 percent say they have not filled a prescription, cut pills in half, or skipped doses of a medicine. In addition, 10 percent of residents overall, including 26 percent of those with a health problem due to Harvey, say they’ve had problems paying medical bills since the storm. 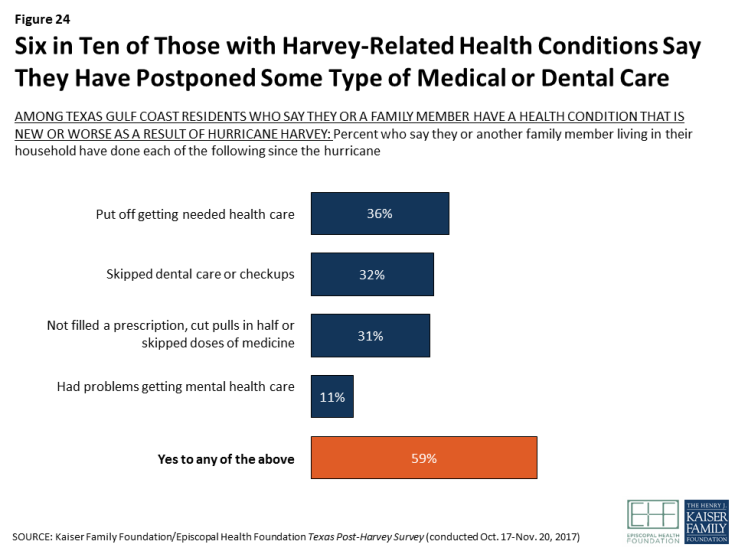 Figure 24: Six in Ten of Those with Harvey-Related Health Conditions Say They Have Postponed Some Type of Medical or Dental Care

Many participants in the focus groups did not have health insurance, though some who were working have insurance through their jobs and some others in Houston have access to a county health program. Most of the uninsured said insurance was just too expensive and they prefer to deal with health issues as they happen. Many reported relying on home remedies or visiting clinics or urgent care centers when they get sick.

“My insurance just went out, and I know it’s gonna cost me going to the clinic. I’m just kind of calling around trying to figure out what’s going to be the cheapest one. Because even with unemployment, I’m not getting what I was getting when I was working.” – 29-year-old white female, Beaumont

“Whatever your gramma told you to do, that’s the remedy. Ibuprofen for pain and tea for your throat. That’s it. And you save $250 on doctor’s visits.” – 33-year-old undocumented Hispanic female, Houston

The trauma associated with living through a disaster like Harvey and its aftermath can lead to increased stress and declines in mental health for some people. While most residents of the Texas counties surveyed (64 percent) say their mental health is excellent or very good, those who were affected by Harvey are less likely than those who were not affected to rate their mental health as excellent (35 percent versus 48 percent) and more likely to rate it as fair or poor (17 percent versus 7 percent).

Overall, 13 percent of residents – including 18 percent of those who were affected by property damage or income loss and 3 percent of those who were not affected – feel that their mental health has gotten worse as a result of the storm. Among those who were affected, some also say they have had a harder time controlling their temper or felt they had a shorter fuse since Harvey (22 percent), that they’ve increased their alcohol use (7 percent), or that they’ve started a new medication for mental health problems since Harvey (6 percent). 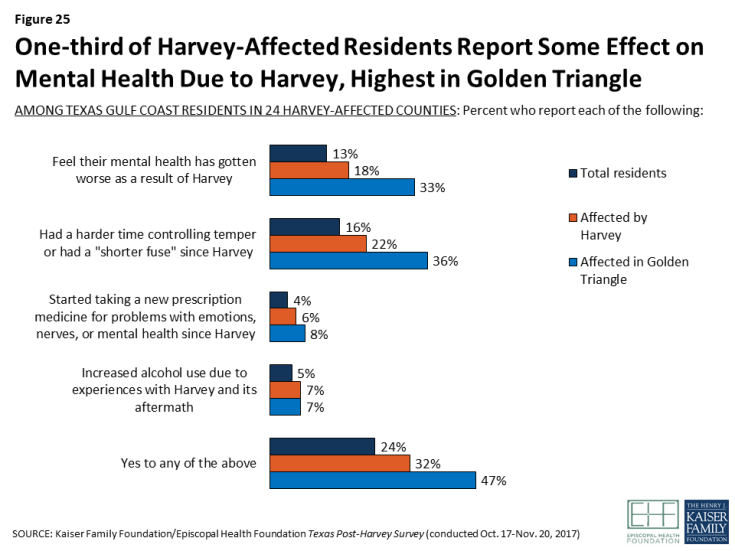 Figure 25: One-third of Harvey-Affected Residents Report Some Effect on Mental Health Due to Harvey, Highest in Golden Triangle

Access to care is also a problem for some with mental health needs. Fifteen percent of those who say their mental health is worse as a result of the hurricane say they or a family member have had problems getting mental health care since the storm.

In addition to formal mental health services, informal support networks can be a key source of help for individuals coping with the stress of living through a disaster like Hurricane Harvey. The survey finds that few affected residents report having a robust support network of relatives and friends living nearby. Just one in five affected residents (19 percent) say they have “a lot” of people nearby who they can rely on for help or support, with another 17 percent saying they have “a fair amount.” Six in ten say they have “just a few” (47 percent) or no people living nearby who they can rely on (17 percent). Black and Hispanic residents and those with lower incomes are also more likely than others to say they lack a robust support network.

Most focus group participants reported some level of increased stress or mental strain due to the storm. Several said that whenever it starts raining, they have flashbacks or start worrying. Others said the stress comes from the financial problems they face and multiple worries about how they are going to find enough work to get back on their feet financially, while finding time to fix up their house and take care of their families. Some mentioned their children’s stress levels, or the strain of trying to keep things “normal” for their kids while they were personally stressed. To deal with stress, some people said they focus on work, others said they spend time with family, have a few drinks, and fire up the barbecue. Many (particularly in Beaumont) said they turned to prayer.

While acknowledging mental health problems, most participants tended to downplay the importance of seeking professional help and see their ability to address other stressors, especially economic and housing, as key to resolve their mental stress. When asked about whether they sought mental health counseling, most hadn’t considered it, with the exception of one young woman in Beaumont. But many seem to have unmet mental health needs. One young man who was unemployed said, “I really don’t have a way of coping with it, I just live with it,” and another young man sitting next to him said, “You took the words right out of my mouth.”

“Whenever it rains I get very scared that it’s gonna start over.” – 52-year-old Hispanic female, Houston

“I feel stressed out still. Even though it’s over, I still have that stress. You know, thinking that we have to fix that room, that we need another car, my husband has been working only for a week and a half. He needs to switch jobs now because the person he was working with, his home was flooded.” – 37-year-old undocumented Hispanic female, Houston

“My mother is 83 and she is a cancer survivor for over 17 years. Now, she’s going to her sister’s house during the week and then she’ll come stay with me on the weekends… My mom is such a ticker for worrying about being a burden on someone else… Thanksgiving is a major holiday for her. We may have a hundred people at our house… We’ll cook dinner, and we’ll cook for everybody there. And like, ‘Okay, what are we going to do this year?’ She’s always saying, ‘This may be my last year’… Sometimes the weight can be really, really heavy – not just for you but for everybody. Our family’s close. So when something affects one, it’s like a domino effect because it’s gonna affect everybody. But we pull together.” – 53-year-old Black female, Beaumont

“We survived today, and we’re gonna get through tomorrow. I’m not gonna go pay $65 an hour to go talk to somebody about what’s going on.” – 42-year-old Hispanic female, Houston

“I pray, but it’s getting to the point to where it’s starting to affect where like my stress on being able to take care of my kids is overwhelming. They have like MMHR I think, and they have like just the counseling. I’ve been thinking of calling…just because I feel like it’s just overwhelming.” – 29-year-old white female, Beaumont