Medicaid provides health coverage for millions of Americans, including many with substantial health needs. Prescription drug coverage is a key component of Medicaid for many beneficiaries, such as children, non-elderly adults, and people with disabilities, who rely on Medicaid drug coverage for both acute problems and for managing ongoing chronic or disabling conditions. (Medicaid beneficiaries who also have Medicare receive drug coverage through Medicare.). Though the pharmacy benefit is a state option, all states cover it, and, within federal guidelines about pricing and rebates, administer pharmacy benefits in different ways. After a sharp spike in 2014 due to specialty drugs and expansion under the Affordable Care Act (ACA), Medicaid drug spending growth has slowed, similar to the overall US pattern; however, state policymakers remain concerned about Medicaid prescription drug spending as spending is expected to grow in future years. Due to Medicaid’s role in financing coverage for high-need populations, it pays for a disproportionate share of some high cost specialty drugs, and due to the structure of pharmacy benefit, Medicaid must cover upcoming “blockbuster” drugs. Policymakers’ actions to control drug spending have implications for beneficiaries’ access to needed prescription drugs. This fact sheet provides an overview of Medicaid’s prescription drug benefit and recent trends in spending and utilization.

Though generic drugs account for the large majority of drug utilization in Medicaid – 86% of prescriptions in 2017 — brand name drugs accounted for 79% of drug spending.

How does Pricing and Payment for Prescribed Drugs Work in Medicaid?

Medicaid reimburses pharmacies for the cost of drugs dispensed to beneficiaries based on the actual acquisition cost (AAC) for a drug. In general, Medicaid does not purchase drugs directly from manufacturers or wholesalers; rather, Medicaid pays for the cost of drugs dispensed to Medicaid beneficiaries through pharmacies. The federal government requires states to use AAC to set payment to pharmacies and encourages states to use the National Average Drug Acquisition Cost (NADAC) data as the measure of AAC.1,2 The NADAC is intended to be a national average of the prices at which pharmacies purchase a prescription drug from manufacturers or wholesalers, including some rebates.

Pharmacies that dispense drugs to Medicaid beneficiaries purchase drugs from manufacturers or wholesalers, negotiating prices for drugs. Payment between the pharmacy and the manufacturer or wholesaler (to acquire and stock the drug) is a proprietary process, negotiated based off the manufacturer-set list prices for a drug. Manufacturers do not provide public information on how they set this list price and historically have not been required to explain changes in a product’s list price. While the list prices most directly affect the wholesaler and pharmacy, they also affect Medicaid reimbursement schedules, as they are an input into the AAC.

Federal law requires manufacturers who want their drugs covered under Medicaid to rebate a portion of drug payments to the government,3 and in return, Medicaid must cover almost all FDA-approved drugs produced by those manufacturers.4,5 The formula for the amount of the rebate is set in statute6 and varies by type of drug (brand or generic).7 The structure of the federal Medicaid rebate factors in the “best price” charged to any other buyers and ensures that Medicaid will always receive a higher rebate than other payers, with some exceptions.8 It also includes an inflationary component that requires additional rebates when average manufacturer prices for a drug increase faster than inflation.9 Rebates apply regardless of whether a state pays for prescription drugs on a fee-for-service basis or includes them in capitation payments to managed care plans. 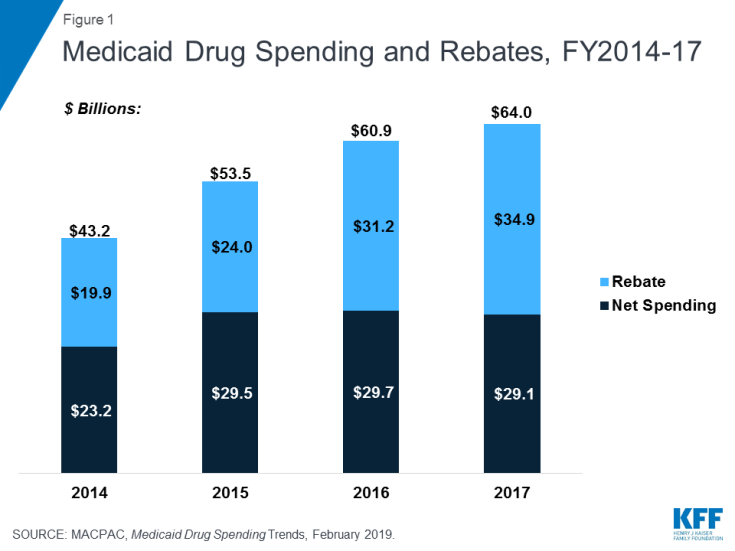 How do states administer the Medicaid pharmacy benefit?

States are not required to cover prescription drugs under Medicaid, but all states opt to include this service in Medicaid. Within federal rules regarding the federal rebate agreement and medical necessity requirements, states have flexibility to administer and manage the pharmacy benefit within their Medicaid programs. States generally rely on two, intersecting levers to do so: 1) use of managed care and/or pharmacy benefit managers (PBMS) and 2) utilization controls.

As more states have enrolled additional Medicaid populations into managed care arrangements over time and states have included pharmacy benefits in managed care contracts, managed care organizations (MCOs) have played an increasingly significant role in administering the Medicaid pharmacy benefit. Most states contract with MCOs to provide services to Medicaid beneficiaries. Under some of these arrangements, states pay MCOs a monthly fee (capitation rate) to cover the cost of services provided to enrollees and any administrative expenses. States may include all Medicaid services in these contracts or they may “carve-out” certain services from capitation rates. Under the ACA, states are able to collect rebates on prescriptions purchased by MCOs and as a result, many states have chosen to “carve-in” the pharmacy benefit to their managed care benefits. Of the 39 states contracting with comprehensive risk-based MCOs in 2018, 35 states reported that the pharmacy benefit was carved in, with some states reporting exceptions such as high-cost or specialty drugs.11

Many states also use pharmacy benefit managers (PBMs) in their Medicaid prescription drug programs. PBMs perform financial and clinical services for the program, administering rebates, monitoring utilization, and overseeing preferred drug lists.12 PBMs may be used regardless of whether the state administers the benefit through managed care or on a fee-for-service basis.

Most states use an array of measures to control utilization of prescription drugs in Medicaid. Because most manufacturers participate in the Medicaid Drug Rebate Program,13 Medicaid essentially maintains an open formulary in which, states are required to provide nearly all prescribed drugs made by manufacturers.14,15 However, state Medicaid programs have used drug utilization management techniques to contain pharmacy costs for many years. Most commonly, state Medicaid programs maintain a preferred drug list (PDL) of outpatient prescription drugs,16 which is a list of drugs states encourage providers to prescribe over other drugs. A state may require a prior authorization for a drug not on a preferred drug list. Often, drugs on PDLs are cheaper or include drugs for which a manufacturer has provided supplemental rebates. Other strategies include implementing prescription limits or using state Maximum Allowable Cost (MAC)17 programs.

What are recent trends in Medicaid prescription drug utilization and spending?

Trends in Brand and Generic Drugs

Though generic drugs account for the large majority of drug utilization in Medicaid, brand name drugs account for most drug spending. Because generic drugs are lower cost but still therapeutically equivalent to brand name drugs, most state Medicaid programs require generic substitution unless the prescriber specifies that the brand is medically necessary.18,19 Generic drugs accounted for the vast majority of prescription drug volume in Medicaid from 2014 through 2017. In addition, the average annual increase in number generic prescription drugs covered through Medicaid outpaced brand name drugs, leading to a small increase in their share of total prescription volume (from 84% to 86%) (Figure 2). However, generic drugs accounted for a relatively small share of Medicaid spending on drugs before rebates from 2014 through 2017, and this share declined slightly over time (from 25% to 21%) (Figure 2). This growth in brand spending reflects national trends caused by the launch of expensive new drugs during the period and price increases for some brand name drugs, such as insulin, for which there are no generic versions.20 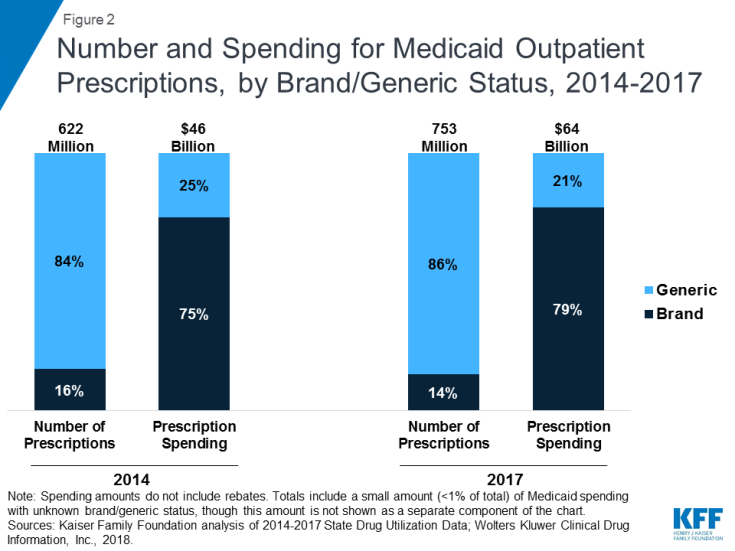 While generics are less expensive than brand name drugs, the cost of generics has also been rising in recent years.21 These price increases reflect a combination of factors including decreasing competition within the generic market and drop in the number of generic manufacturers, as well as delays in FDA generic approvals, supply or manufacturing challenges for come drugs, among others.22 Despite the inflationary component in the rebate calculation, the complex, interrelated nature of pricing and reimbursement means that cost increases are not necessarily limited for generic drugs in Medicaid. Additionally, some believe that even limiting Medicaid spending for generics to inflation is problematic, as the expectation is that the price of generic drugs will decline over time due to competition.

Trends in Specialty Drugs and Biologics

In recent years, much attention in Medicaid pharmacy issues has been focused on high-cost blockbuster or “specialty” drugs, which are generally drugs that are expensive and/or require special administration. The most notable example of this attention is direct acting antivirals (DAAs), such as Sovaldi and Harvoni, used to treat hepatitis C (HCV). These drugs were a major advance in the treatment of HCV but carried a list price (initially $84,000 for a course of treatment with Sovaldi) that posed a challenge to state Medicaid program financing, even with the required rebate. Because a disproportionate number of people with HCV are enrolled in public programs, Medicaid financed a large share of DAA treatment.23 Increased competition within the class has led to some decline in list prices,24 but DAAs remain expensive, and antivirals account for a substantial share of Medicaid drug spending.25 Some states, such as Louisiana and Washington, are pursuing new approaches to further manage DAA costs while extending or maintaining access for people with HCV (see Box 1).

A related area of focus in recent years is biologics, which are products, such as drugs or vaccines, derived from living organisms with chemical structures more complicated than traditional small molecule drugs. While biologics cannot, by nature, have a technical generic equivalent, there are “biosimilars,” or products deemed “highly similar” or “interchangeable” with a referenced biologic.26 Biologics tend to be priced expensively and face less competition from biosimilars than small molecule brand drugs face from generics. Additionally, although biosimilar competition does lower the price of biologics, it does so to a lesser degree compared with the effect of generic entry on small-molecule drug market.27 As a result, Medicaid spending on biologics (14% of prescription drug spending) is outsized compared to the number of prescriptions that Medicaid fills (less than 1 percent of total Medicaid prescriptions).28

What are recent policy initiatives in Medicaid pharmacy benefits?

Both state and federal policymakers are undertaking efforts to control prescription drug costs. Much state activity in Medicaid pharmacy benefits is focused on the goal of obtaining greater supplemental rebates from manufacturers. Some states are focusing their efforts on high-cost drugs. State are also pursuing broader drug cost initiatives that have implications for Medicaid. At the federal level, the Trump Administration has proposed or undertaken a number of actions targeted at prescription drug costs, many of which have implications for Medicaid.29 Congress is considering a host of legislative proposals related to prescription drugs, such as action to make technical changes to Medicaid rebate rules. (See examples in Box 1).

As policymakers move ahead with efforts to address Medicaid prescription drug spending, understanding the basic structure of the pharmacy benefit and recent trends can help illuminate potential direct and indirect effects, including those on access to care.